|| Click here or scroll down for Tim's original sneak peek review: A Look Inside Crystal Five. ||

Trying out a restaurant during Winterlicious can be dicey. Many of the higher-end and more established Toronto restaurants don't put their back into the meals and service they present to Winterlicious patrons. I'm not proud of that Toronto, but there, I've said it.

So I was nervous about trying out Crystal Five (C5) during the 'licious. But I didn't need to be. A combination of exceptional service, a spacious dining area and novel interior space, and dishes that were for the most part outstanding, means I'll be coming back soon. Prix fixe or not.

Crystal Five definitely played nice with Winterlicious. A menu of Chef's Specials could be substituted in to your meal at a reduced price. For instance, if the mains on offer didn't appeal to you, you could swap in the Dorset Lamb "Salisbury" Steak, Smoked Provimi Sweetbreads, Flageoulette, Lamb Bacon, Parsnip Puree, with Foie Gras Hollandaise for $10 (regular menu price $28).

I didn't actually make any of the substitutions, so I can't report on them either way. What we did have was everything else. Because I went with my sister, who gamely ordered the opposite of everything I did.

First, the bread. Pleasantly soft and fresh, and served with a molasses-flavoured butter, which was like spreading on candy. One of the breads in the selection was pumpernickel. That'll come up again later, but not in a good way. 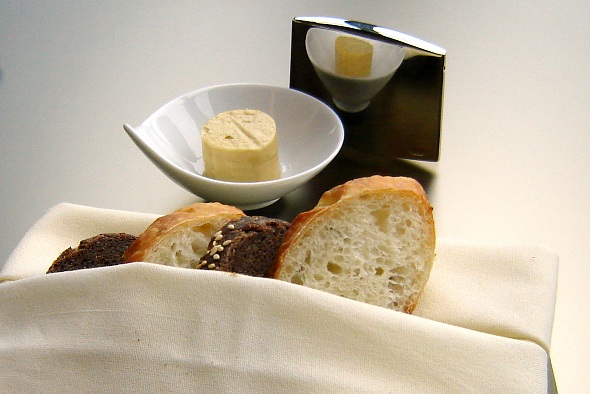 The device in the centre of the table (reflecting the butter) that looks like a not-well-hidden camera is the salt and pepper shaker. Which is an elegant design (careful, salt and pepper are reversed), but means no fresh ground pepper. Everything I had was perfectly seasoned, but I know there are foodies for whom fresh pepper is life, so bring your portable grinder if you're going to C5. 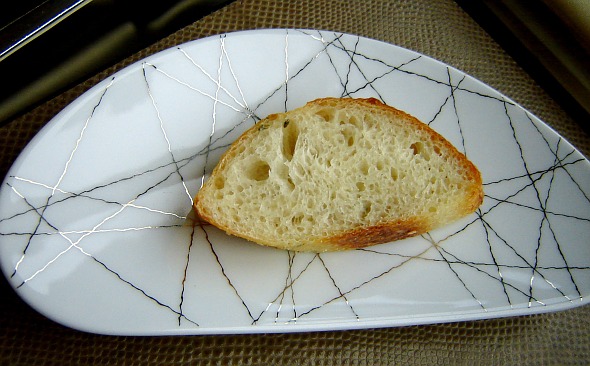 See how the side plate echoes the shape of the bread? Those crazy design kids... someone sat in a room somewhere and planned that.

To start, I had the Organic Micro Greens in Yuzu Vinaigrette. Yuzu is an Asian citrus fruit, and the salad was light, flavourful, complex, and very sweet. 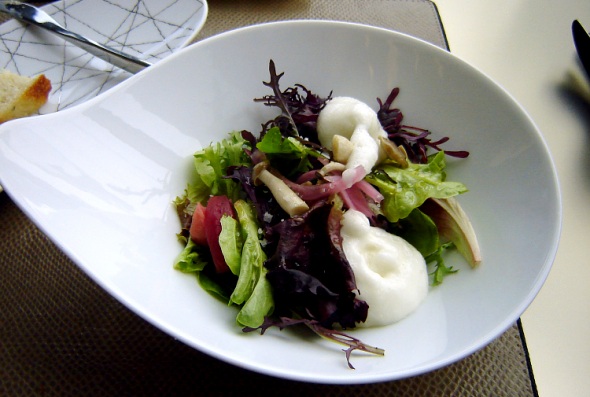 The vinaigrette came as a foam. C5 dabbles in molecular gastronomy and is very fond of foam. And also seedlings. If your dish didn't come dressed with one, it probably had the other.

My sister started with the Butternut Squash Bisque, which was extremely good. Topped with salmon, it was a true bisque, complete with small pieces of lobster. I can't remember exactly, but I'm pretty sure the white was foam. I don't see any seedlings, so the odds are pretty good it was.

My ignorance of what the white was is my own forgetfulness: each dish was presented with a thorough description, and the servers were well-informed.

My main course was the Truffle Poached Chicken in Shitake Soy Reduction. Which was... incredible. To misquote Stuart McLean: "You don't even have to carve it. You just have to speak to it firmly and it'll fall apart."

It might be the most succulent chicken I've ever had. The soy reduction and the terrine and red grapes it was presented on complemented it beautifully. It's a prime example of good ingredients, well-prepared. 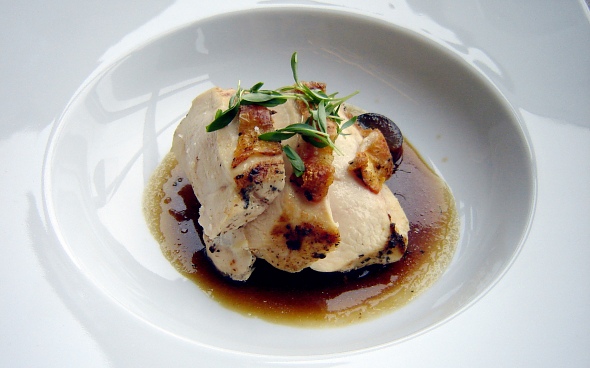 My sister did not do so well. She had the 72 Hour Sous-Vide Beef Short Rib sided with Chestnut Potato Mash (feel free to notice the seedlings). 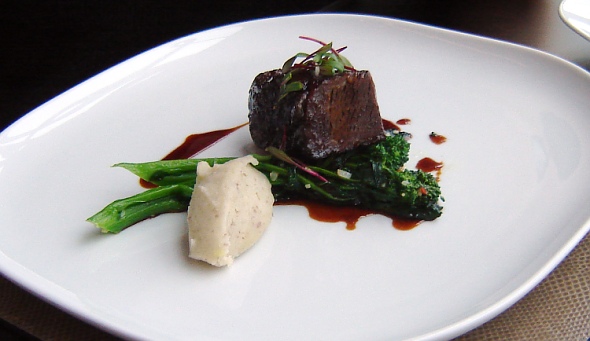 The beef was, as she put it, "actively dry". I had a taste, and she was right. My chicken was so well-prepared that it was a bit shocking how dry her beef was. As she said "72 hours might have been too long for this little guy to go without liquid". It was suck the moisture from your mouth dry. Maybe something they'll work through, but on that day, a definite miss.

For dessert, my sister had the Chocolate Bread Pudding with Parsnip Gelato and Carrot Foam, and a decaf cappuccino (cappuccino, $5). C5 fessed up about the foam, but what's that on the side? Oh, that's right. Seedlings. They really get around.

It was a lovely lunch and an overall excellent experience, but I have to give honest coverage. My poor sister really got the short stick again on ordering. Her bread pudding was, well, it wasn't dessert.

I had a bite, and unfortunately she described it perfectly when she said: "if you took a loaf of the pumpernickel we started with, and put it in a blender, it would be this bread pudding". It was the most pumpernickel-y bread pudding you can imagine. Which might have been daring and delicious, but it wasn't well integrated with any other flavours. Like, say, the chocolate from the descripton.

The pudding was served with rum-soaked raisins. And boy howdy, those were don't-drink-and-drive raisins. I had one that was so rum-soaked it was "practically a pirate".

For my dessert, I had Pecorino Cheesecake with Ginger Snap Tulle and Balsamic Gelee. 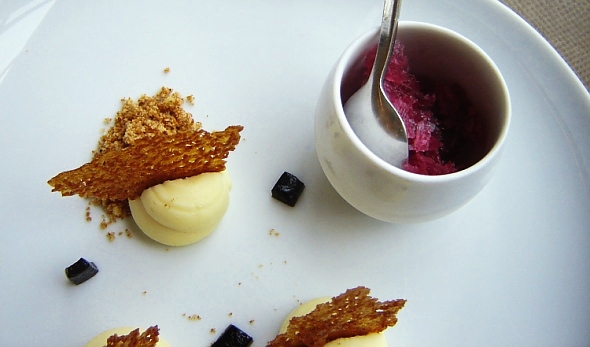 Which was served with a flavoured ice, described as a palate-cleanser. I might have to debate that, because there's cleansing your palate, and then there's knocking it out.

Eating ice crystals is refreshing, but it doesn't prepare your mouth well for cheese. After a few spoonfuls of the ice, I tried my deconstructed cheesecake dessert. To find that the inside of my mouth was so numb I couldn't actually taste anything, until I defibrillated it back to life with a sip of espresso (single shot $4).

Once my senses were back on board, it was a creamy, mild, lovely dessert. C5 has a partnership with the Cheese Boutique, and the pecorino was an unusual choice which worked well.

Cheesecake at the end of a meal can obliterate any flavours that came before it, and leave you with an unpleasantly full feeling. But the portions and presentation of this "cheesecake" meant it was more like getting a small cheese plate, only sweeter, and paired with the tiny balsamic gelees, more interesting. Definitely something I would order again.

Finally, the logistics: C5 is wheelchair-accessible, with an elevator taking patrons up to the 5th floor. During ROM hours, you use the main ROM entrance, and during off-hours, there is a well-signed separate C5 entrance on the outside of the building.

The washrooms at C5 are more elusive. They're not signed, and to get to them you actually go through the Exit door to the left of the bar. I had hardly stood up from the table when a waiter came over to show me where they were. Maybe he wasn't a waiter. Maybe it just comes up so often that it's someone's job. Perhaps something sign-like could help with that.

I know. It's a bit cruel to post a thumbs-up review of a Winterlicious experience on this, the last day of Winterlicious. But even though we happened on a few misses, C5 is definitely worth trying out throughout the year. And think how ready you'll be when Summerlicious comes along! Y'know what, don't even wait until then. Melt-in-your-mouth chicken is just a reservation away. 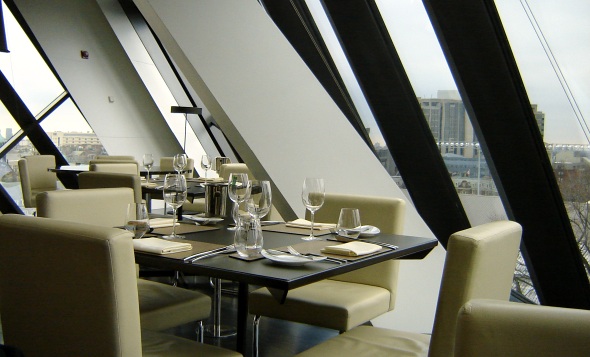 A Look Inside Crystal Five 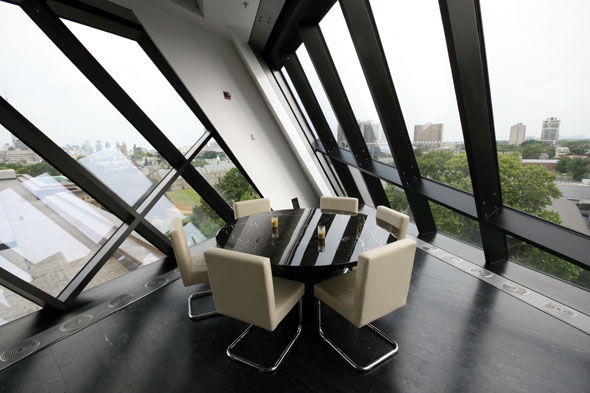 When I go back to the ROM's new C5 Restaurant Lounge this is the table I want. Located in the south west corner, it has the most light and the best views, not just of the grassy rooftop and smoggy downtown skyline (more on this later) but also of the bold II BY IV designed interior that is Crystal Five. 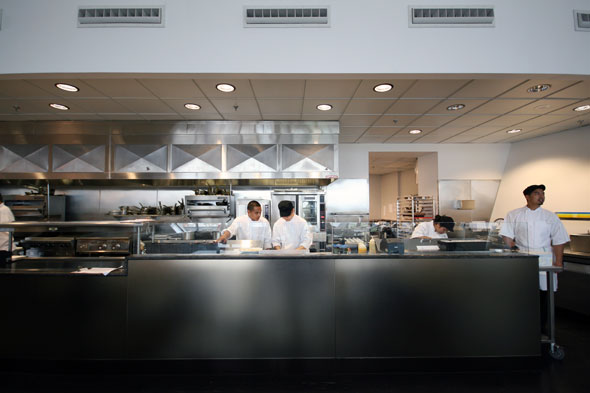 Earlier this week I ascended an elevator at the ROM to check out this new restaurant and lounge located at the pinnacle of the Michael Lee-Chin Crystal . The dining room is huge. It seats 120 and is memorable for its high ceilings and familiar jagged corners and windows. Along one side, diners can gaze into a long open kitchen where a team guided by head chef Ted Corrado create dishes like Quebec Squab and seared Hokkaido scallop salad. Where possible, local and organic ingredients are sourced and featured but obviously the chef does make exceptions for certain aforementioned ingredients. 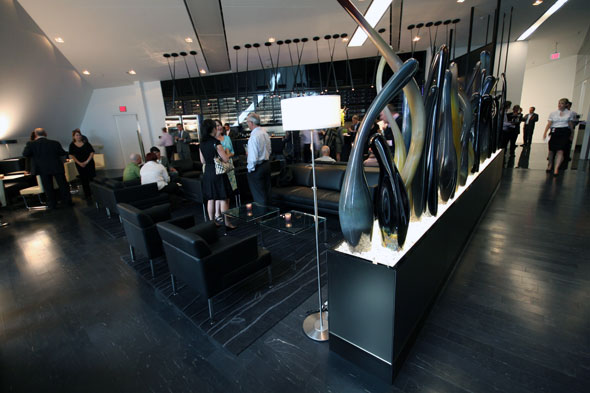 Immediately south of the white, airy dining area is a sleek dark lounge accented with big flowers and a dramatic glass sculpture designed by Toronto's Jeff Goodman Studio . Here there's ample opportunity to grab a cocktail from the bar or sit back and relax on one of the plush leather sofas. 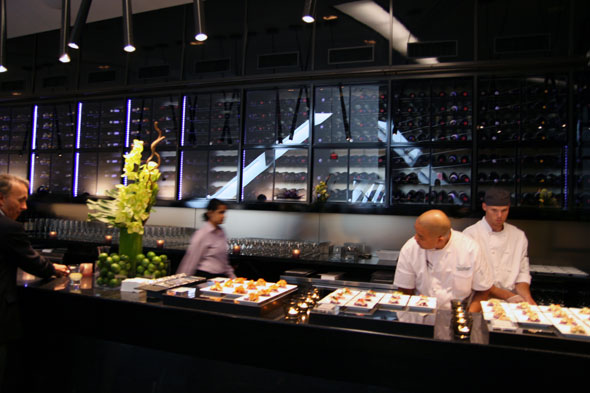 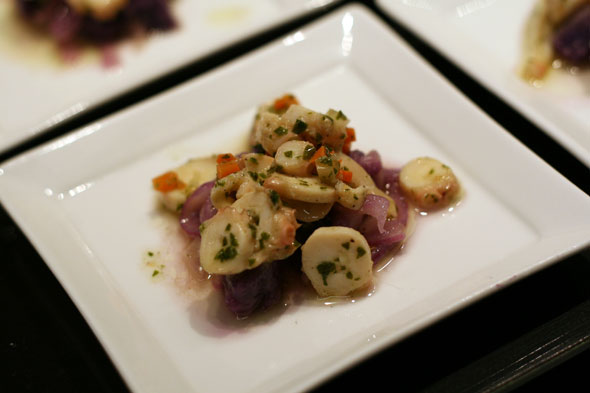 Drinks and conversation in the lounge: 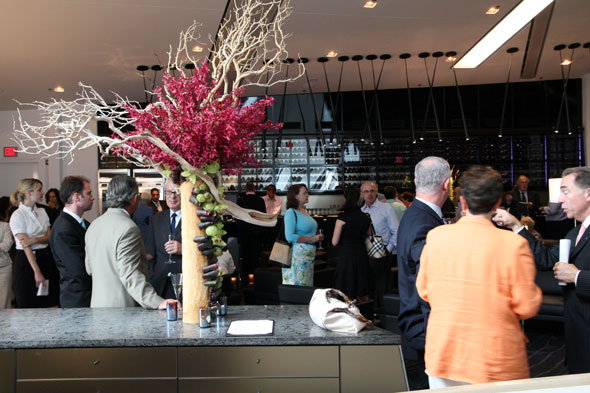 The view from the choice corner table. A new rooftop garden is planned for completion this fall. 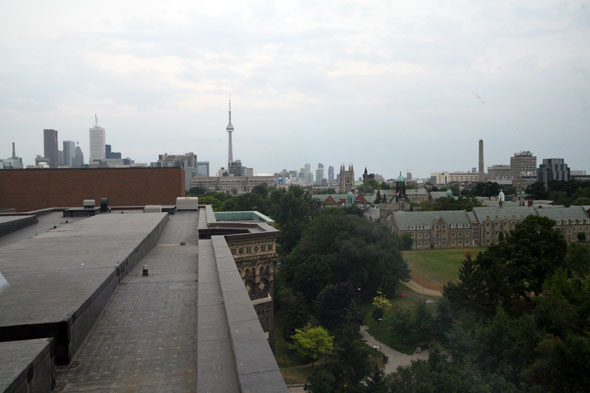 Like the ROM's more casual Food Studio , Crystal Five is open to the public. You don't need to pay ROM admission to get in.