The Crown Princess offers some of the best dim sum south of Steeles and West of Kennedy (though I suppose the proprietors at Lai Wah Heen would have something to say 'bout that) and considering the surroundings in which you eat those savoury morsels, it better be since the dining room is as overwrought as any of my reviews. I mean Sweet Jane , could you dial down the lavishness of the dĂŠcor a bit?

Having dim sum in the Crown Princess is like what I imagine it would feel like eating in Liberace's bathroom if his fleet of Chinese French maids fluttered back and forth, arms piled high with bamboo steamers instead of feather dusters and his tables were cleared by what I can only assume are middle aged Chinese castrati in frilly collared black shirts that make them resemble the goth version of a crown rack of lamb (though they do sing beautifully fwiw) 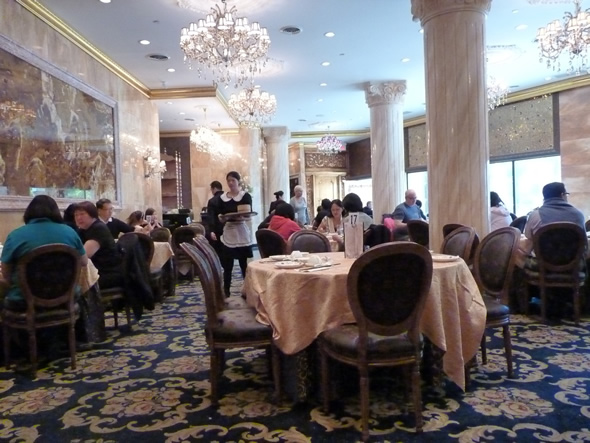 So how exactly did this humble Chinese brunch take on such monstrous proportions, metastasize into a rococo riot of brocaded cushions, ornate gold leaf, faux marble pillars? Crown Princess is a downtown satellite of the equally opulent Crown Prince in Markham and in truth dim sum's not the real point as they both "court" the Chinese Wedding Banquet and HK expense account crowd.

Anyone with even a hint of humility or who likes their dim sum traditional, their porcelain chipped and their chopsticks plastic will sense a feeling of immediate, madcap alienation. That said, suppress any pinko sensibilities you have, dear class warrior, summon your inner Merovingian and indulge in the crazy over-the-topness of your surroundings - your effort will be rewarded with some seriously good nosh. Though if you're gonna own the Matrix thing, as pristine as the bathrooms are you might actually wanna bring your own silk if you want to *ahem* curse in French 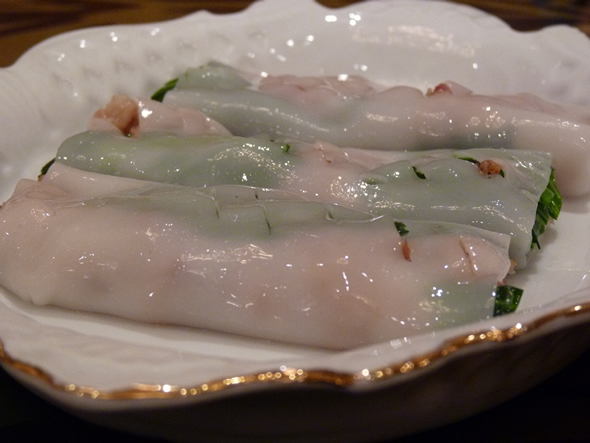 Admittedly, prices are a little higher than average but you can even stick it to the ruling class if you arrive before 11 am when most of the items on the dim sum menu are $3.10 each!

Right from the get-go, you'll be impressed by the small details down to little porcelain rests for your enameled chopsticks and dandified teapots filled to the brim with fragrantly floral jasmine tea ($1.20/person). 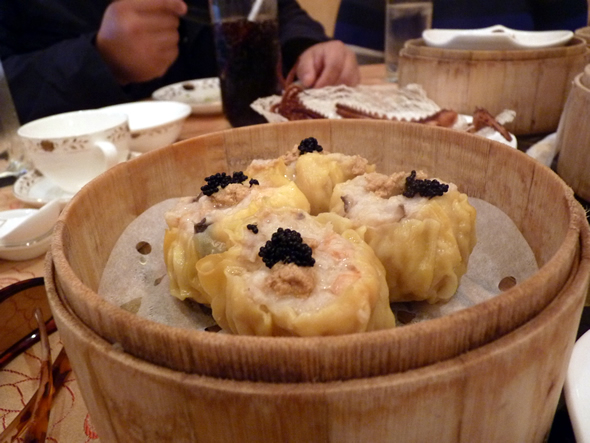 at Crown Princess are far from typical, they're some of the most technicolour flavours downtown. The har gao ($5.30 for 4) is packed with fresh, plump pink pieces of shrimp steamed to perfection stuffing translucent rice flour pockets that are neither too thick nor too flimsy and adding just the right amount of carb to balance out the bright seafood flavour of the dumpling.

The siu mai ($6.30 for 4) are as opulent as the digs. These lovely little steamed dumplings

have always been my favourites because of the perfect balance of pork and shrimp they achieve. Until I tried the Crown Princess version, I didn't think you could improve on perfection but adding a small dot of sweet, smoky foie gras mousse and switching out plain ol' fish roe for proper caviar elevates the dish to an amazing flavour bite that'll having you begging for more like Oliver Twist. 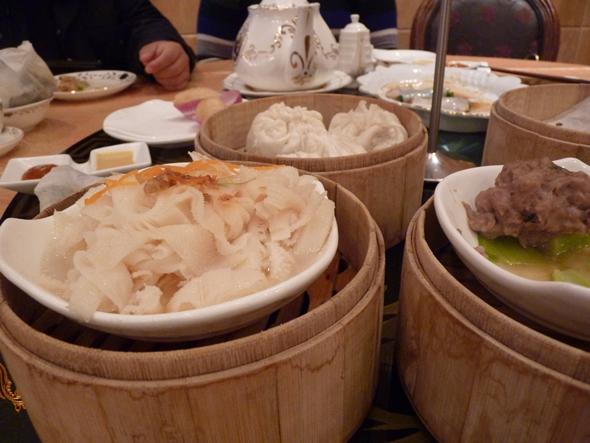 Not everything coming out of the kitchen is blinged out, and are probably just as good, if not better at your go-to dim sum (well if I actually had one since Yiu Wah closed down). The fung jao ($4.30) are competent if unremarkable though there's not much you can really do with chicken feet.

Pouches of sticky rice in lotus leaf ($5.30 for 3) are tasty but portions are tiny compared to most places in Chinatown . And though it guarantees the freshness since all items are delivered to order, you think you could've spent some of the reported $2 million it cost to tart up this former 5th Element space on dim sum carts (you could even have them pushed by hunchbacks to go with the whole Versailles decadence theme). 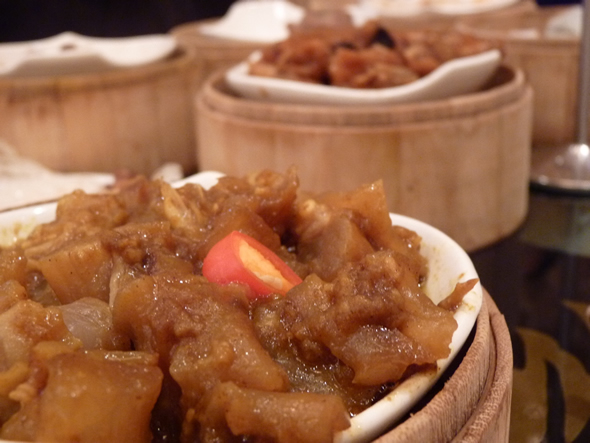 The kitchen gets back on a roll with a new personal favourite. The beef tendon in thai sauce (pictured above) ($5.30) is all about texture; think al dente penne crossed with the stickiness of spare ribs and smother the lot in a spicy, lemongrass and chili infused Thai curry and you'll marvel at exactly how crack-like addictive the 5th quarter can be. 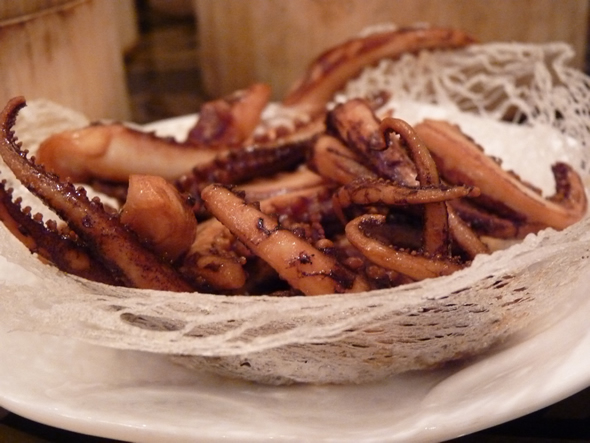 Speaking of offal, the beef tripe in XO sauce ($4.30) lacks even a hint of the trademark "wet-sheep" smell that usually accompanies tripe dishes. Also absent is the excessive chewiness, all which conspires to make this version of the dish something that'll appeal to the pickiest eaters (provided you don't actually tell 'em what they're eating, natch). Other winners include perfectly crispy fried octopus tentacles, and beef meatballs scented with preserved orange peel.

Crown Princess may not ever be your go to dim sum restaurant but if you're in the mood for high-end indulgence and don't fancy the drive to the burbs, then swing by and give it a try. Sure you may feel slightly like a ventriloquist's dummy sitting on this lap of luxury but hey, there are worse things to be when the food is this tasty. 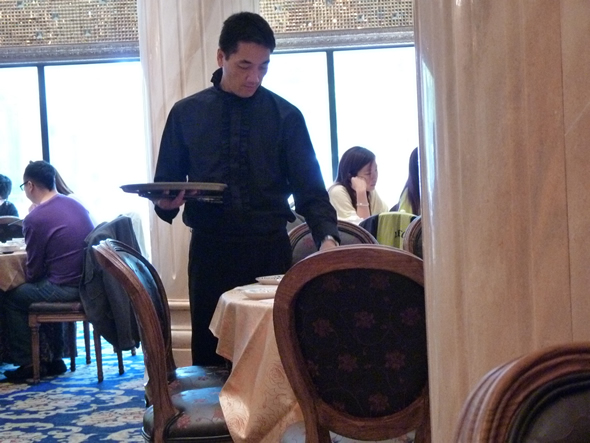