Caplansky's in Yorkville features menu favourites from its food truck and original delicatessen on College Street. This eatery gets busy at lunchtime and makes it easy to take meaty sandwiches back to your office.

For owner Zane Caplansky, it's the fourth brick and mortar location (joining two others at YYZ) on the road to global deli domination. 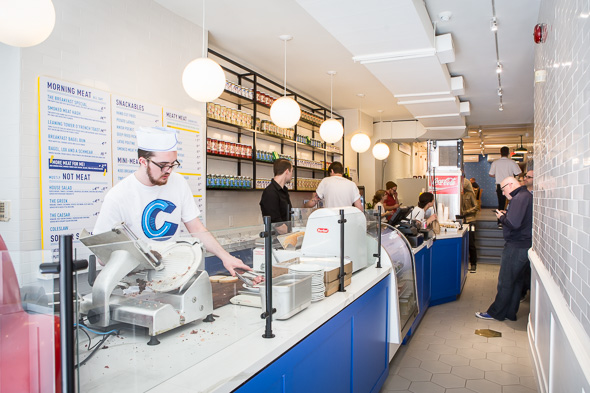 This location differs from its predecessors with its fast casual style designed with speed and customization in mind. You order and pay at the counter; take-out business is brisk, especially on sunny days when the opportunity to eat outside, along this pristinely landscaped stretch of Cumberland, presents itself. 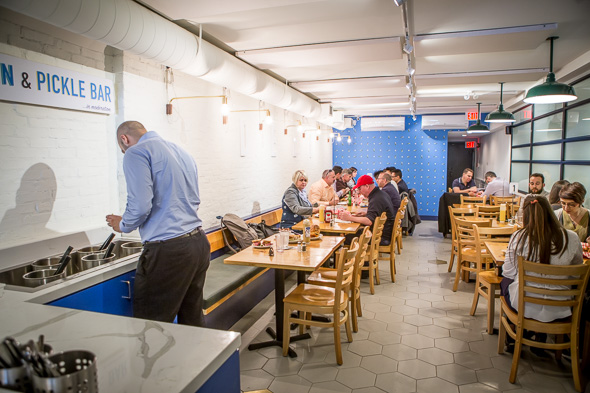 If you choose to dine in, you can head back to table after you order. You'll find an an all-you-can-eat pickle bar and kitschy mustard fountain here and you can dress up your sandwich up with unlimited dill spears and vinegary hot peppers. 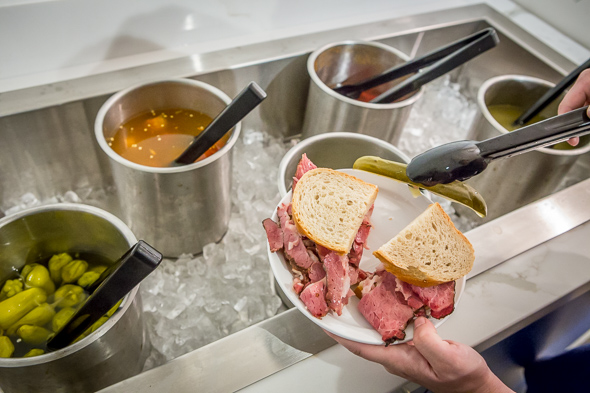 Caplansky's success is well documented. He started making briskets one at a time and has since scaled up his operation; he's now serving up five to six tons of smoked meat (between each restaurant, catering gig and his food truck) each week. 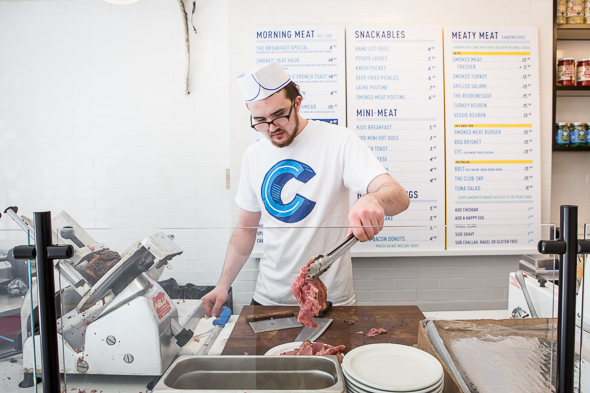 The sandwiches, built on Silverstein's rye, aren't nearly as tall as I anticipated but the portion proves more than satisfying. Instead of slicing the smoked meat by hand, this location uses a machine slice for the sake of efficiency. This results in thin, wispy slices. Even still, I think the Caplansky's smoked meat ($13.95 with fries, soup or salad) has gotten better and more consistent over the years. 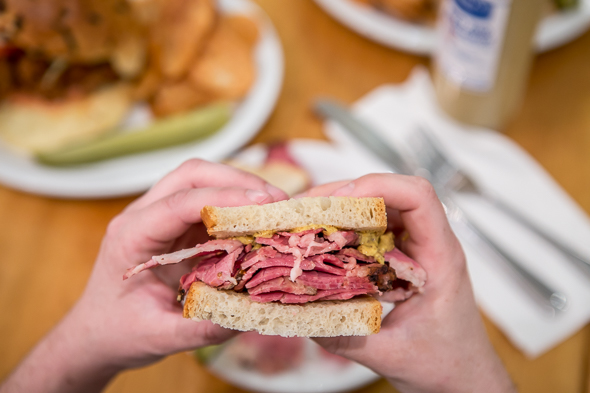 The meat, the product of a two week brining, smoking and steaming process, is flavourful and moist; the bread is delightfully fresh and springy and the lineup of house mustards is far superior to the usual yellow variety. 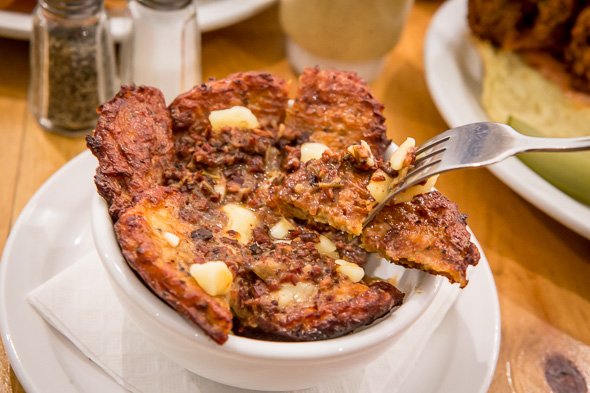 Latke poutine ($7.95), a food truck favourite, has become a fixture among a roster of deep fried pickles ($6.95) and knish pockets ($6.95). The combination of deep fried potatoes, cheese curds and gravy are all present, but the potato pancakes ramp up the classic flavours with a little onion folded in. 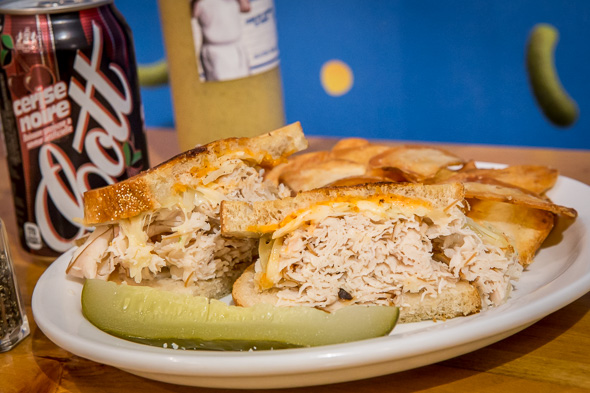 The Turkey Reuben ($15.95) is a slightly leaner take on the classic deli sandwich, which features melted cheese, sauerkraut and Thousand Island dressing 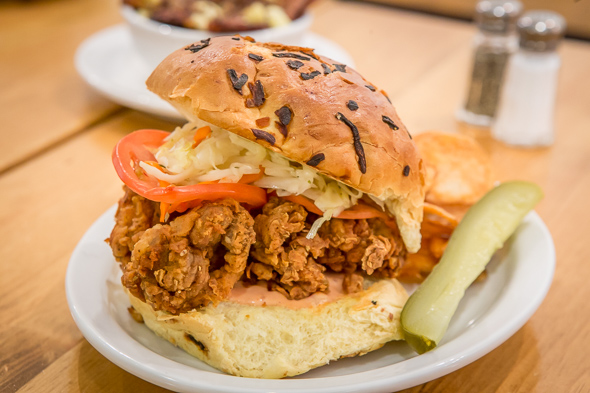 New to this location is the CFC, a.k.a. Caplansky's Fried Chicken ($13.95). It's a beast. This massive, two-hander features battered boneless chicken on an onion bun topped with tomatoes, slaw and tangy dressing. 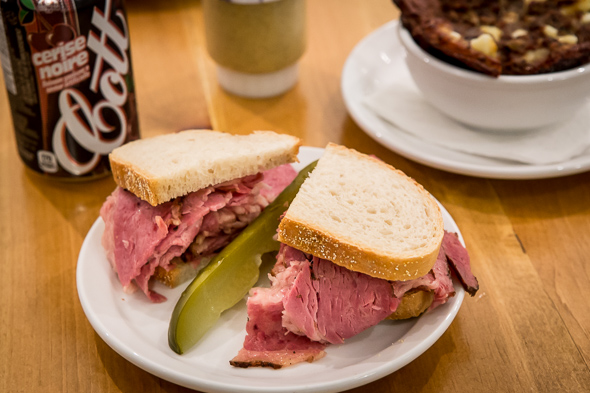 Fountain sodas, Cott's in cans and draught beers, including Steam Whistle, Beau's, and Deli King Spiced Dark Rye Lager round out the drink options.In addition to lunch and dinner offerings, this Caplansky's offers bagels with lox and schmear, and towers of French toast in the mornings. 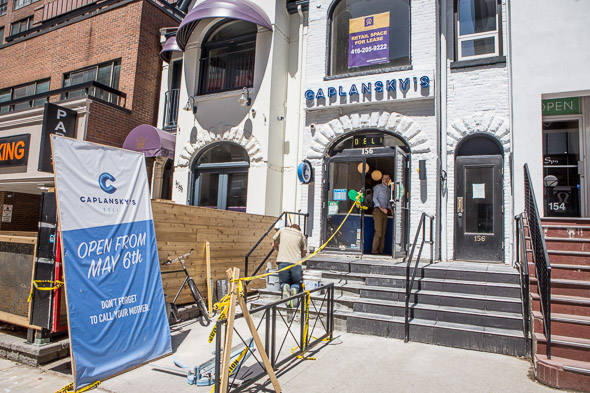