Cafe Diplomatico has been a fixture in Toronto for over 50 years. Now a restaurant and bar flocked to for its patio with a megascreen for soccer games, the place actually started out as a cafe and coffee roaster, paradoxically originally called Bar Diplomatico.

Though this place dealt exclusively in gelato and cannoli at first, they’re now home to draft beer, Italian food specials and customizable pasta and pizza. 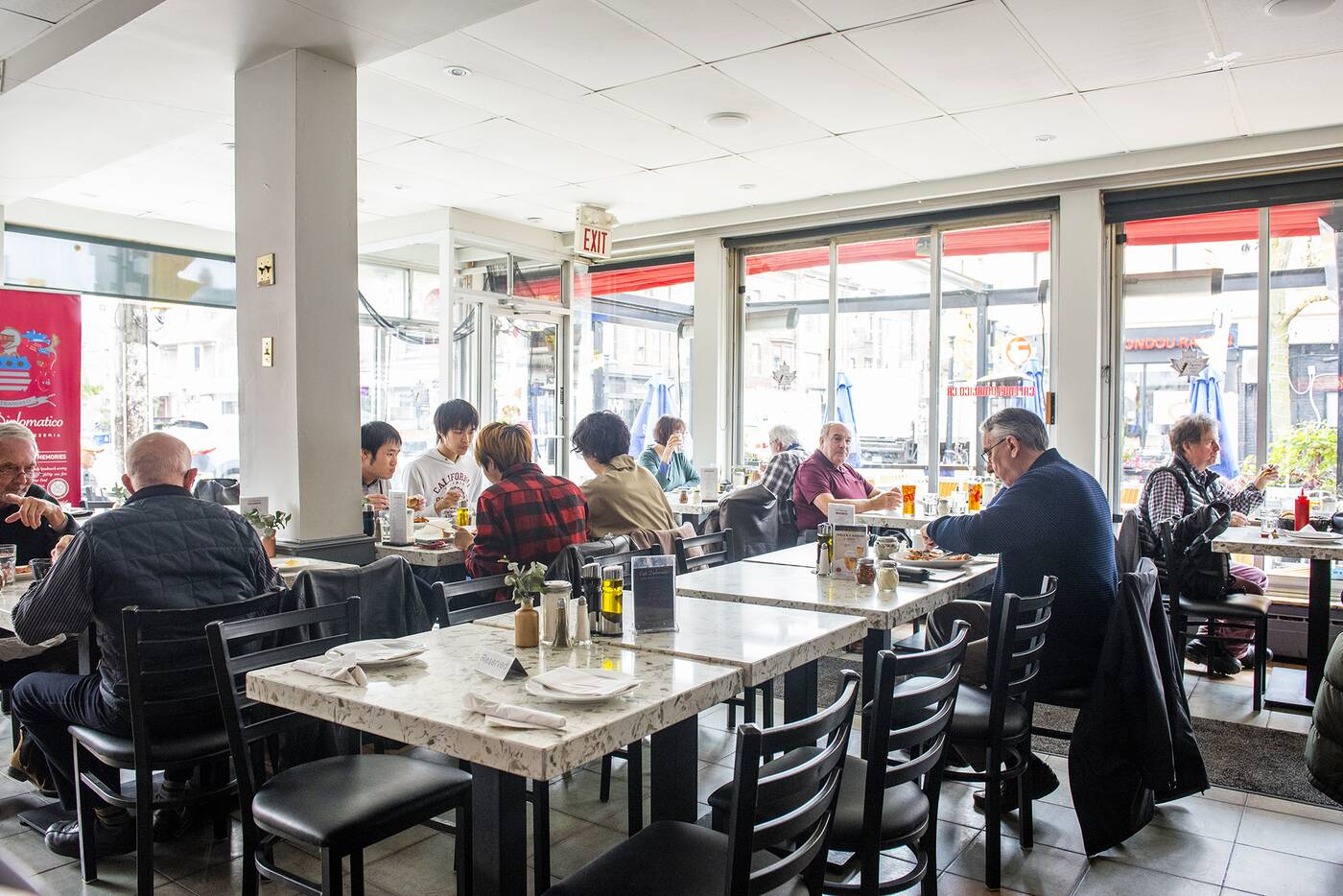 A kitchen was added in 1981, and the ancient space feels cozy though it seats 120 both inside and out—probably because it’s often rammed with people. 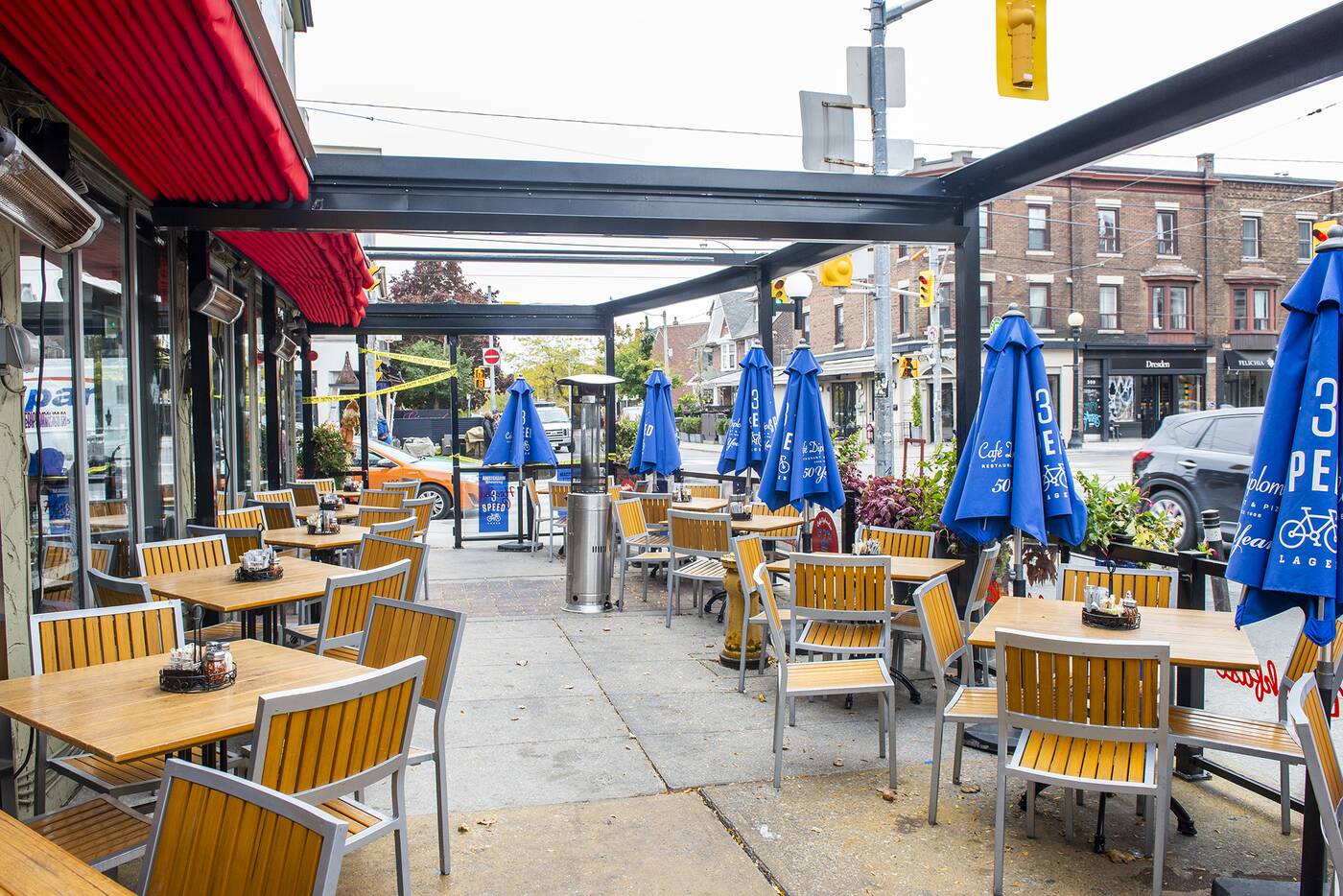 That patio was actually one of the first in Toronto at a time when eating and drinking al fresco was uncommon. 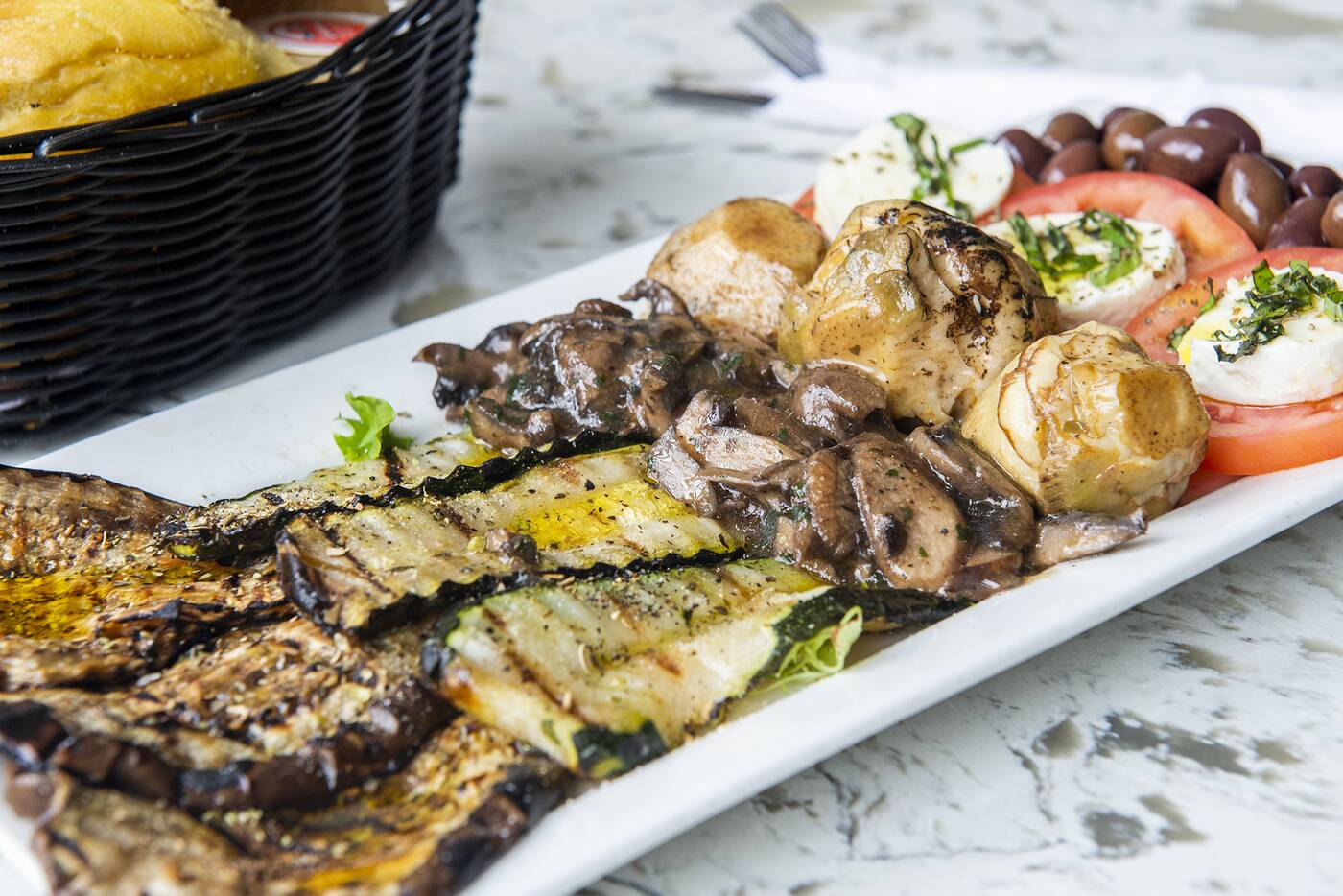 Uncle Paul’s Antipasto ($18) is named for the brother of original owner Rocco Mastrangelo, a collection of grilled portobello mushrooms, eggplant and artichoke paired with bocconcino cheese, sliced tomatoes and olives. It’s one of four crowd-pleasing shareable platters, two with meat and two without. 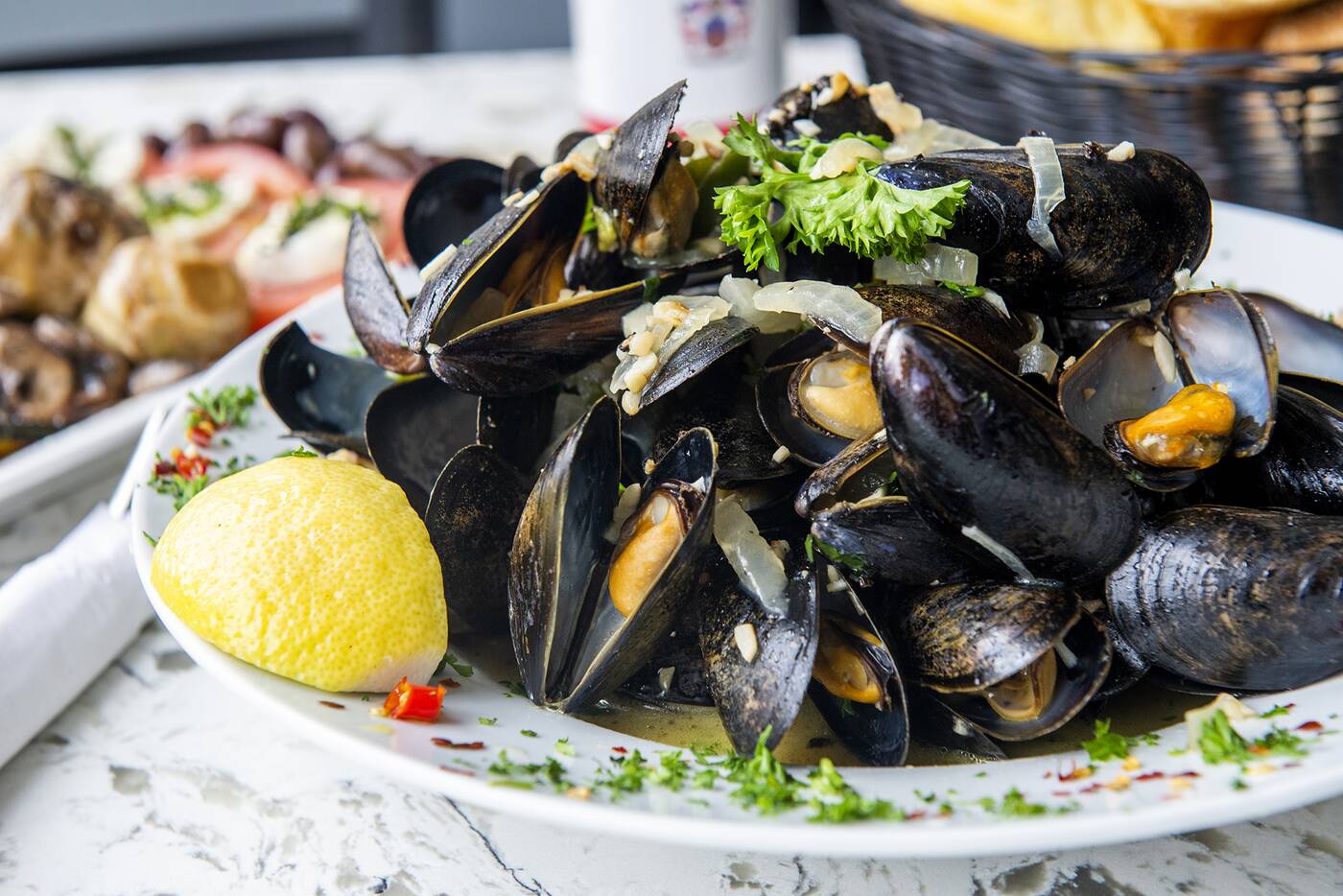 Mussels ($13) are a warmer classic start to a meal here, with your choice of a tomato sauce or the aromatic white wine version we opt for. 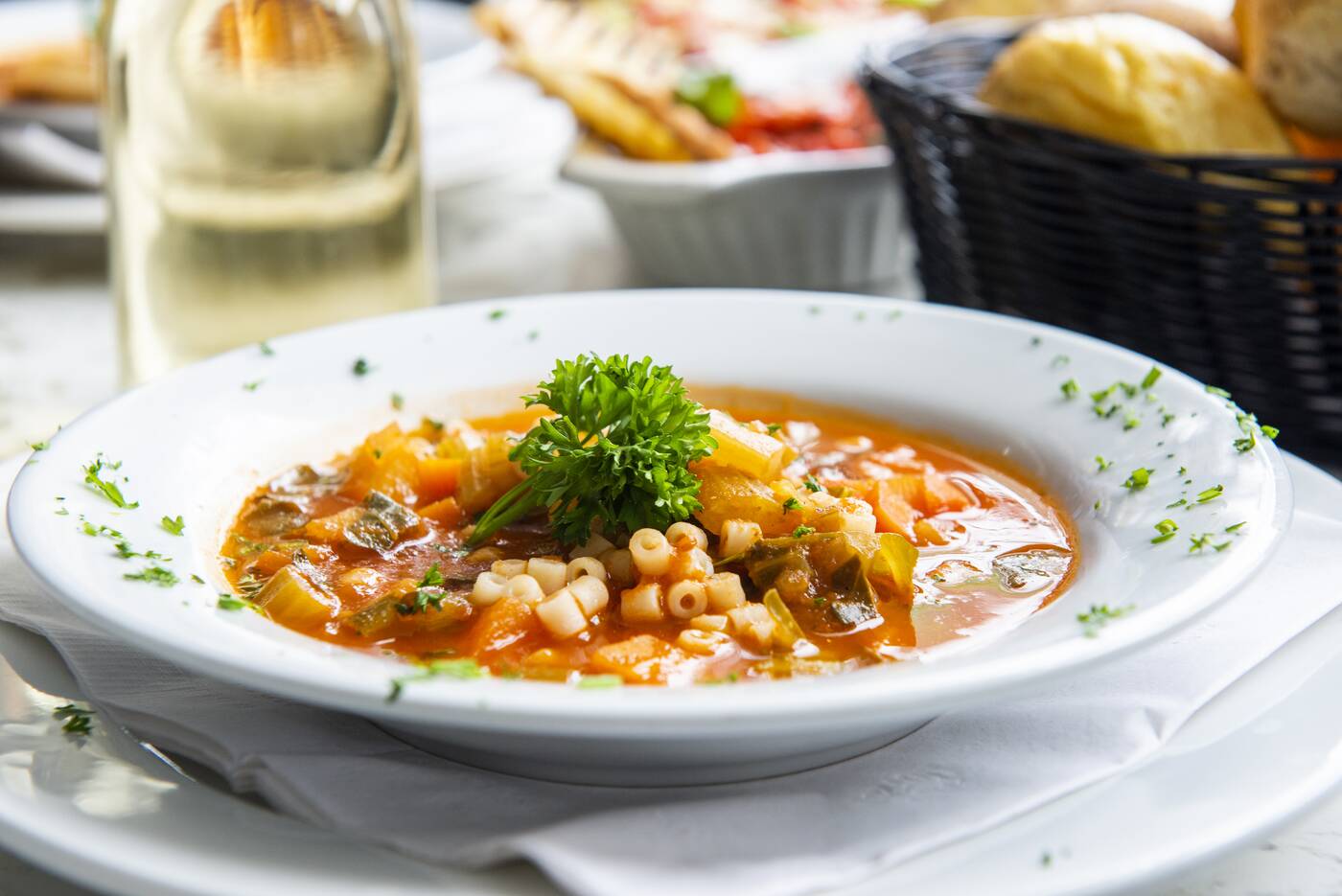 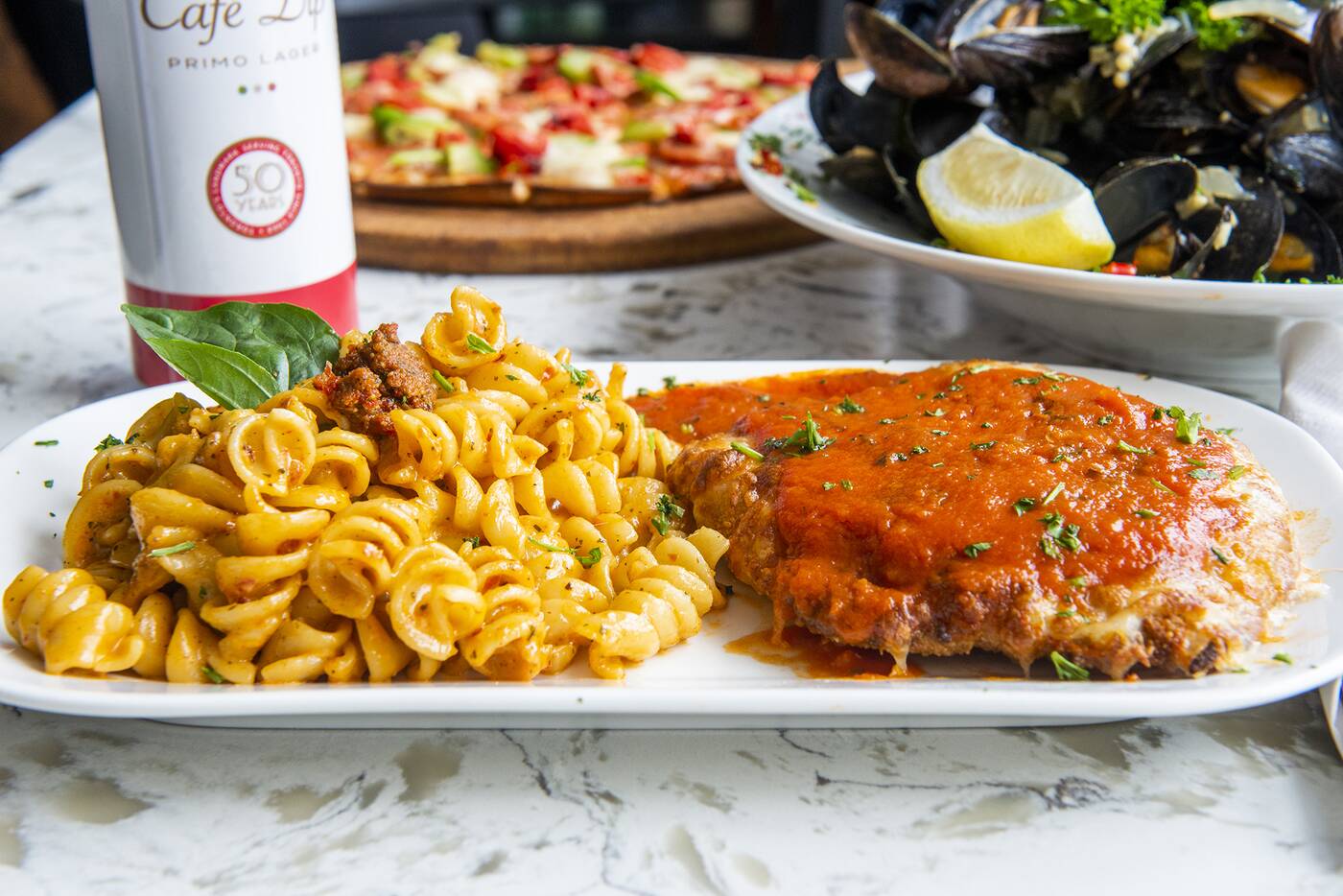 Chicken parm with pasta or salad is Wednesday’s daily special for $12.50. The carb-loaded plate is more than filling, a sundried tomato pesto creamy, cheesy and flavourful, a thick piece of breaded chicken smothered in sauce and gooey cheese. 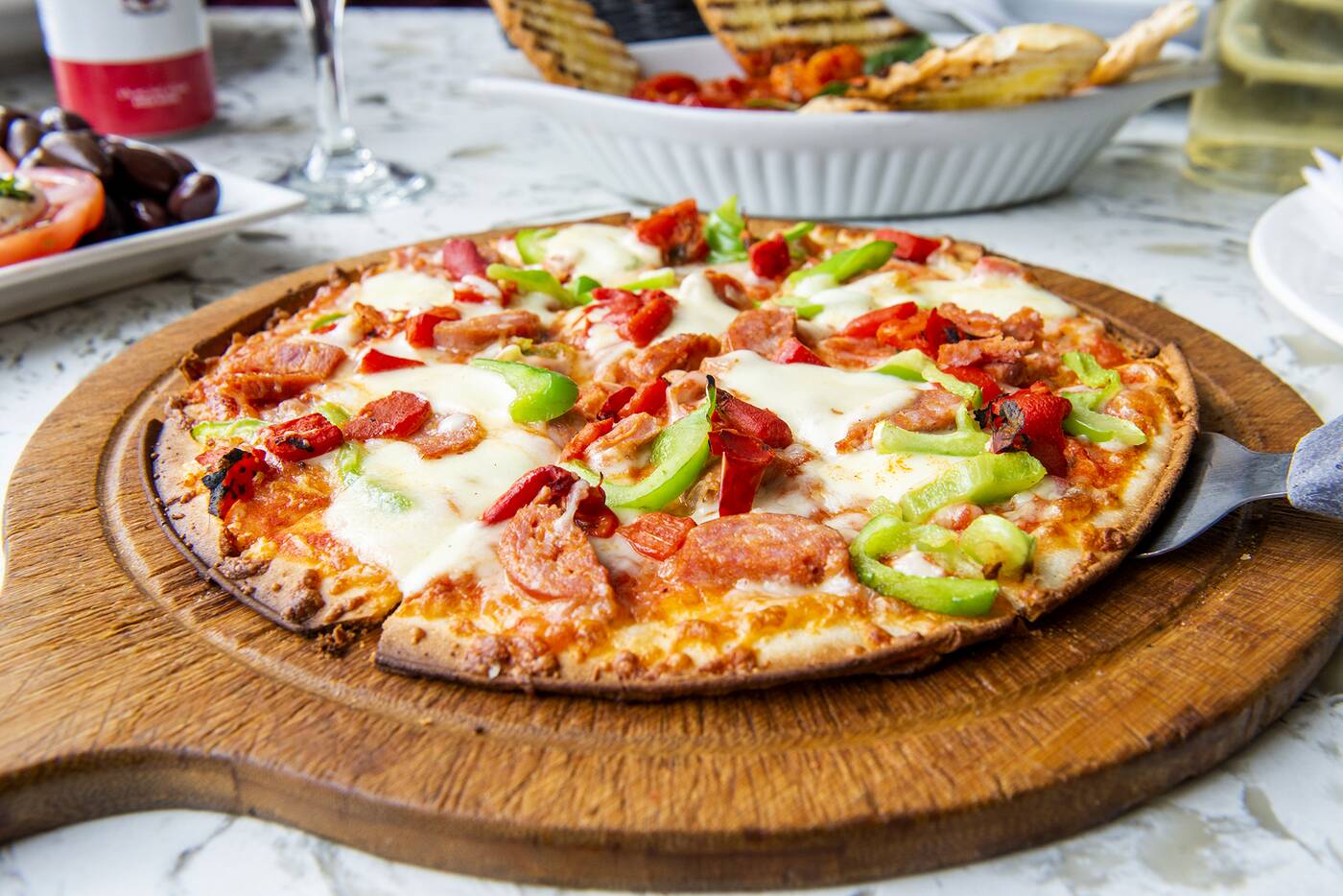 A personal size gluten-free pizza will set you back $13 as opposed to $11.50 for a non-gluten-free personal pie. The crust is made with rice flour, not the most supple, foldable, leoparded thing ever but it gets the job done. 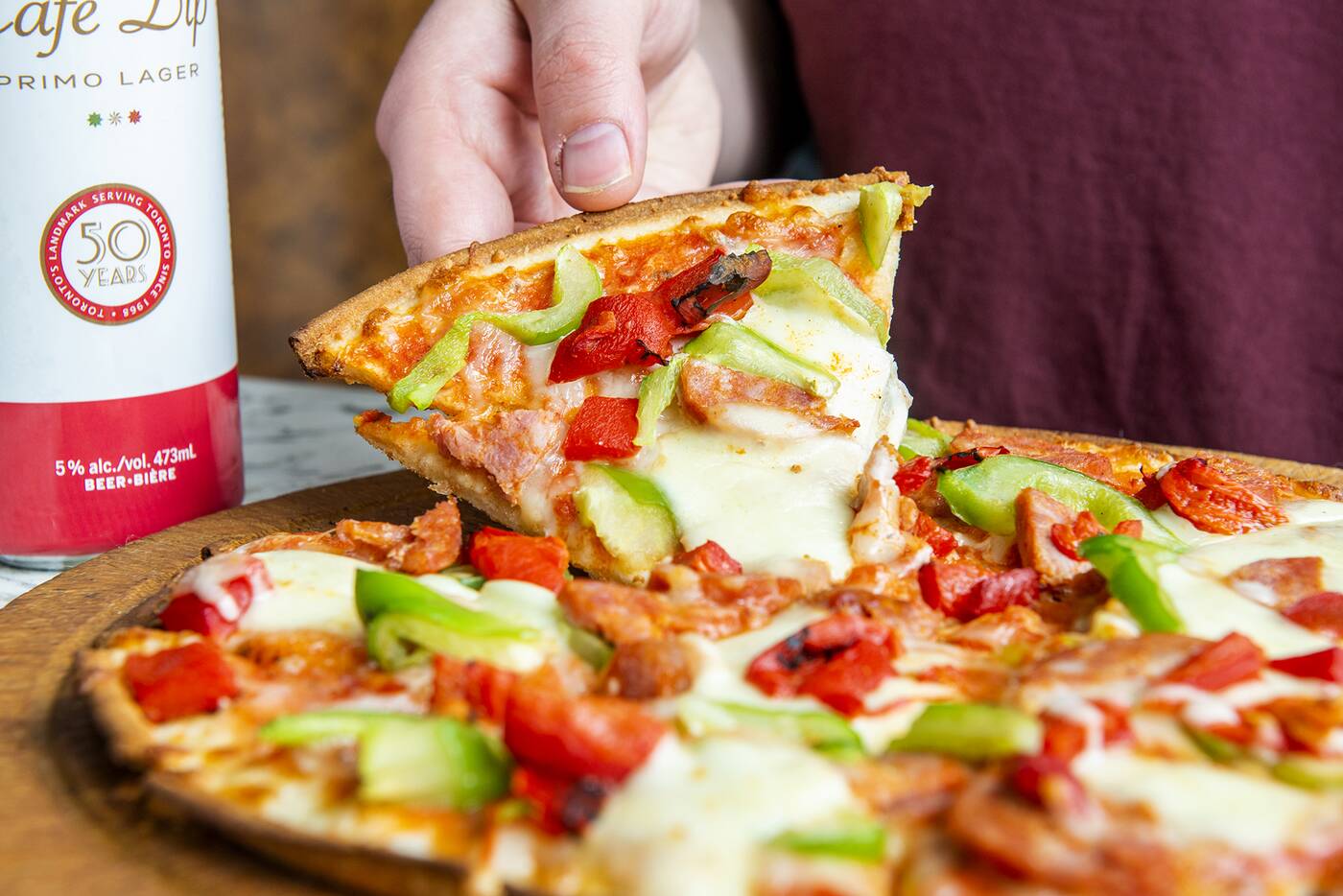 Regular toppings are 75 cents each, regular toppings a dollar and gourmet toppings $1.25. That puts our pizza with bocconcini, Italian spicy sausage, green pepper and roasted red pepper at $16.75.

It’s not so much that there isn’t better pizza or pasta in this city, even in this neighbourhood, it’s more about the ease and accessibility of full control over customization and a casual feel. 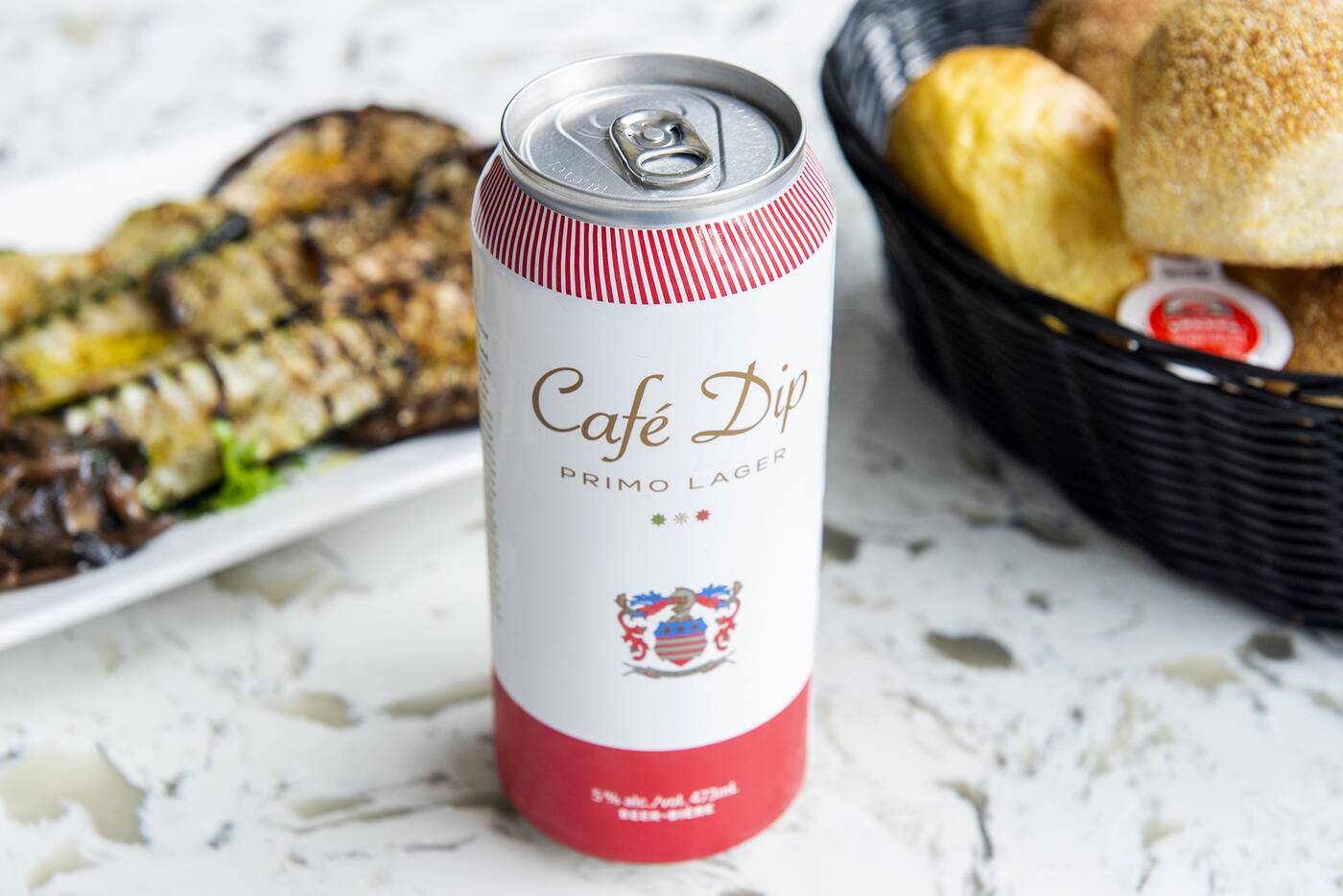 The Cafe actually now has their own lager ($6) by Amsterdam on tap and in tall cans, as well as their own Pinot Grigio on tap. 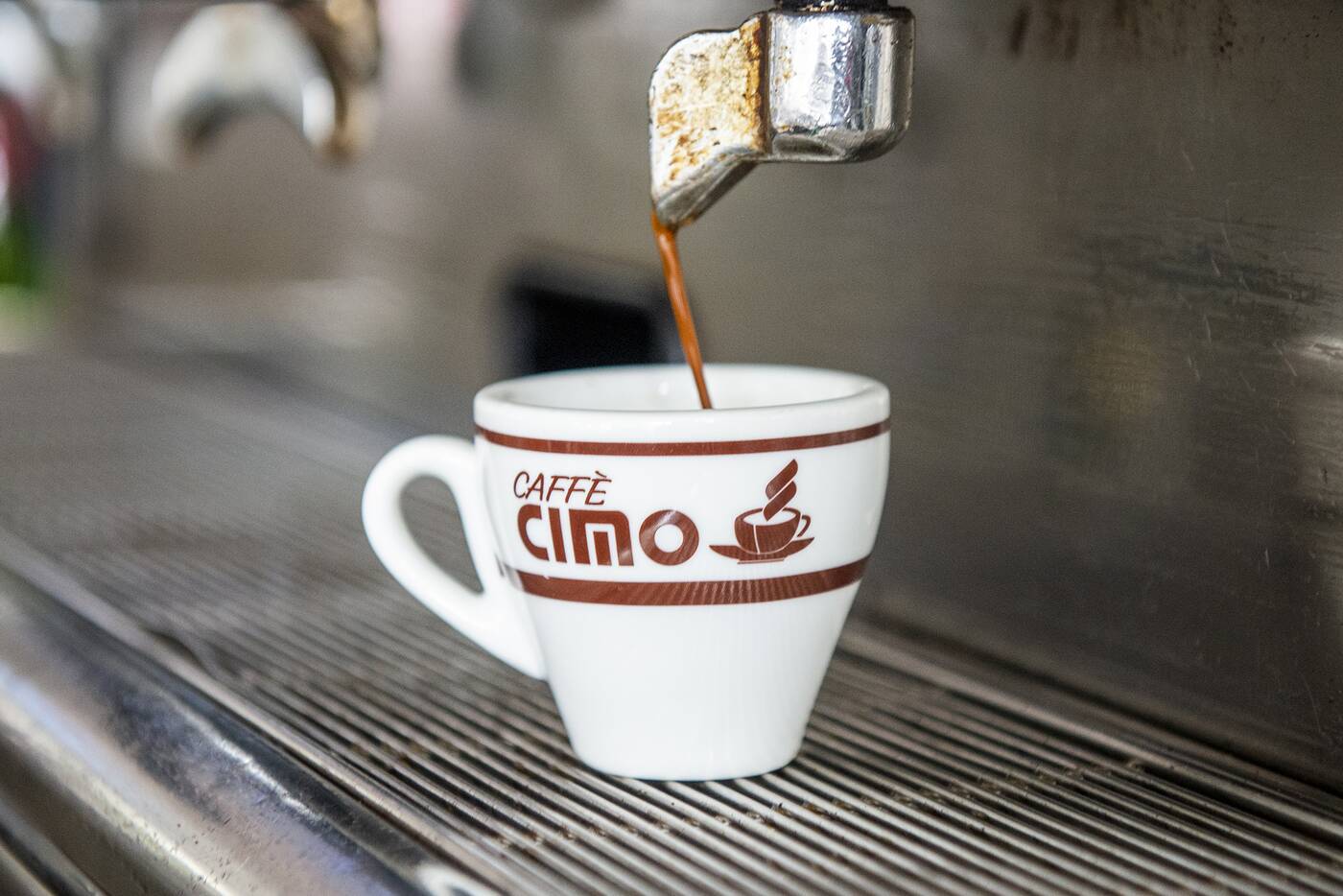 Cafe Dip is still relied on by many for their morning coffee to this day, and actually does breakfast seven days a week with an early bird discount until 11 a.m. 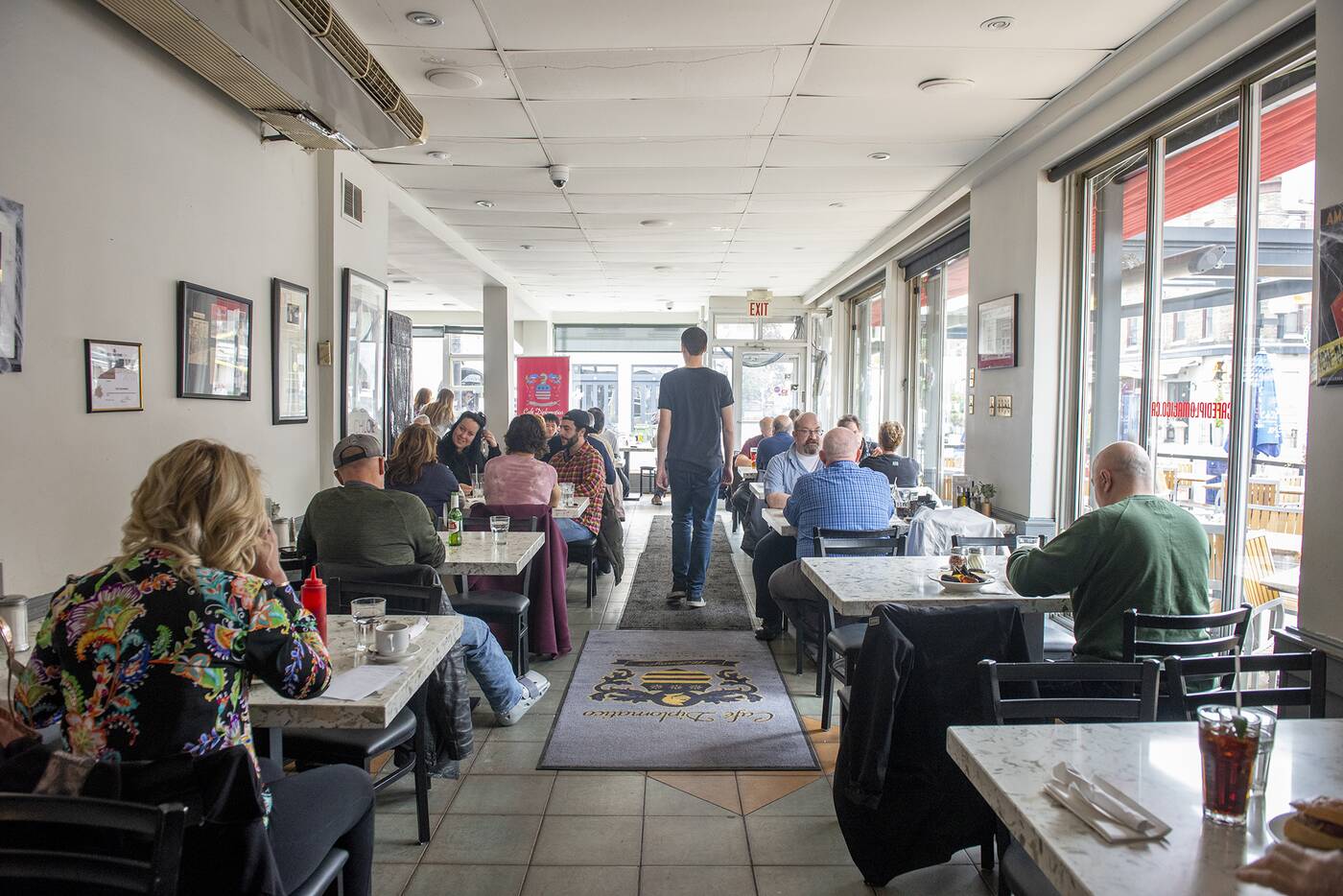 The name Diplomatico is inspired by the original owner’s military past, born out of a desire to create a space where neighbours could mingle and discuss politics as friends over coffee, booze and food. 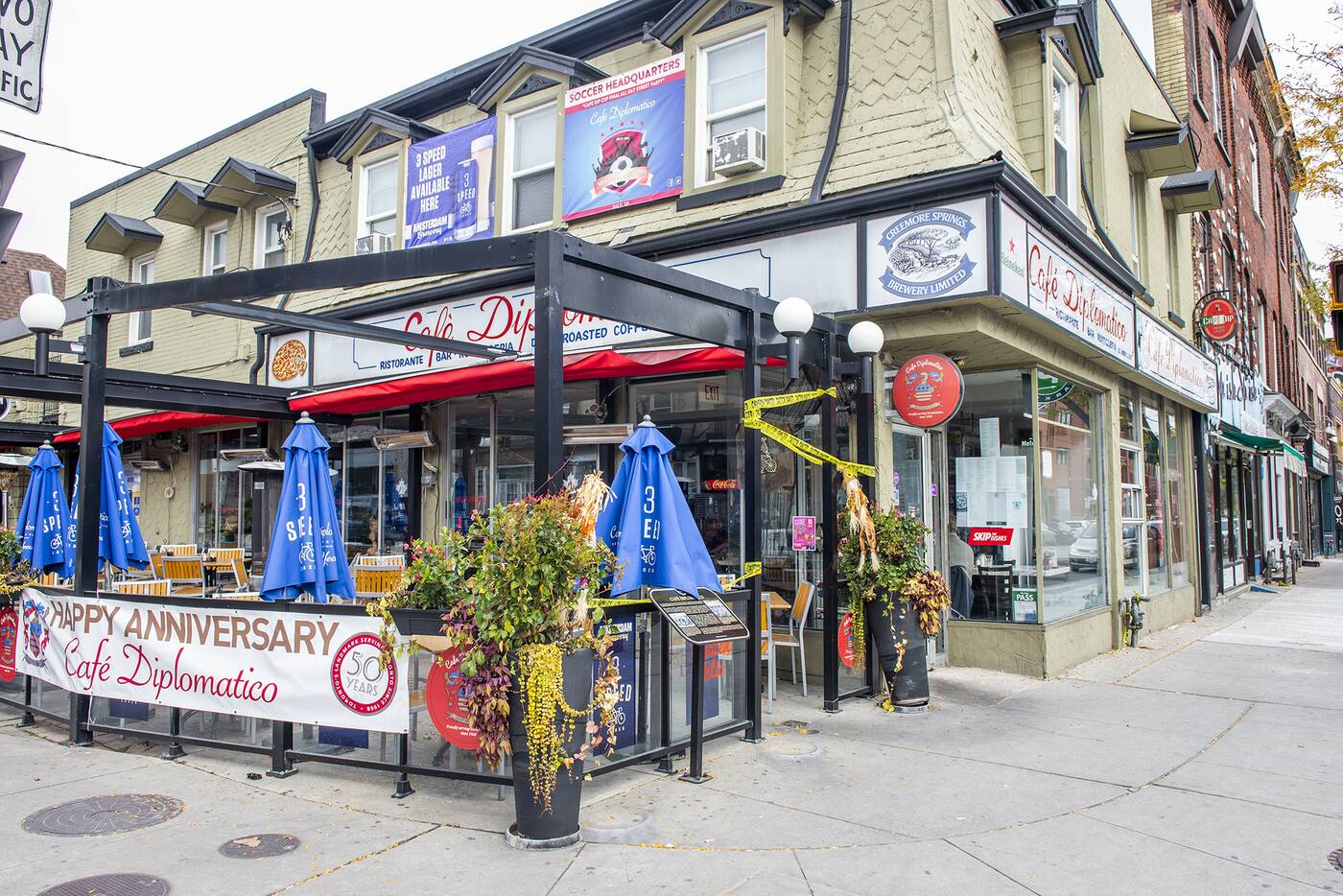