There's a particularly stubborn old Zen koan in which a young pupil asks his master whether a dog can indeed posses Buddha-nature. The master (in typical zen obliquity) implies that the question itself must be unasked for any wisdom to be attained.

This pseudo-mystic morsel offers a useful bit of question begging distraction while awaiting your order from the grill of this pleasantly Scandinavian-decored Roncesvalles satellite of the much loved Picton wiener shop (and it takes a ponderously long time for my order to arrive which is surprising since my Friday night visit sees me the only patron in the place).

So then, just what is the nature of a Buddha dog?

The wieners themselves ($2 each) are locally sourced and roughly 4" long-- apparently a marketing ploy aimed at giving kids just enough to satisfy them and grown-ups a bit of variety to mix and match flavours (pimp your wiener with cheese and sauce upgrades at $.25 a pop). Y'know the tapas trend has truly exhausted itself when even hot dog joints are jumping on the 'small plates' bandwagon. 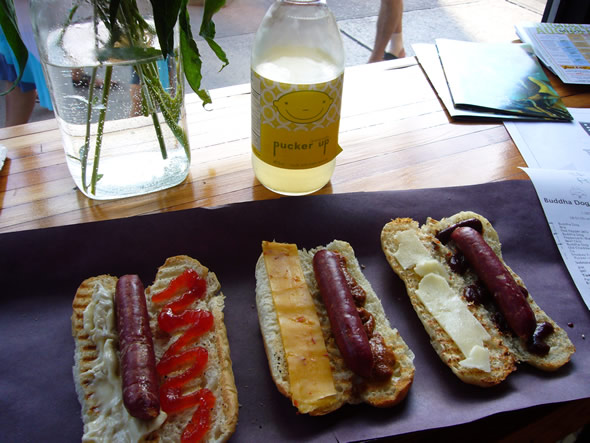 Your Buddha dogs (trust me, you'll want more than one...possibly more than three) then get grilled on a panini press--first solo and then along with the bun to melt the cheese and create a nice variety of textures: the hallmark 'snap' of the dog plays well off the soft crispiness of the bun, and the assortment of homemade condiments.

My three dogs come dressed with: brie and red pepper jelly (Friday being brie day, as if you didn't know ); jalapeno jack and beef chili; and smoky ketchup and old cheddar.

Oddly enough the standout is the brie and red pepper jelly dog; the musty creaminess of the brie and sweet savouriness of the jelly enhance the wiener's natural spice allowing a tiny package to pack a surprising flavour punch. The ketchup and old cheddar dog is tasty but unremarkable and the chili and jalapeno jack dog gives an example of too many intense flavours undermining the experience by competing with each other.

No doubt eating that much tubesteak can work up a thirst which can easily be slaked with a bottle of Buddha dog's deliciously sweet and tart 'Pucker-up' lemonade (also available in a strawberry infusion for $2.50 each) a near perfect drink for a humid summer afternoon.

The novelty of grabbing some tasty, locally sourced 'artisan' hot dogs on a day trip out to Picton would appeal to most foodies getting ready to jump into their 's' class for the long ride home but expecting people to jump on the subway for those same dogs is another thing entirely. Buddha dog isn't close enough to the action to appeal to the apres-club crowd who's taste buds are so dampened with spirits they could care less about how gourmet their dogs are (Buddha dog closes around 8 so it's a moot point anyway). And as gourmet as the dogs are, it's hardly a place for an anniversary dinner or a foodie destination.

Don't get me wrong, these dogs are very tasty, the problem lies in the fact that i'm not sure the hotdog by nature was ever in need of an apotheosis -- especially not to the tune of $12 or so with a drink. So as flavourful as the dogs were it's hard to imagine a return visit being high on anyone's dining list. 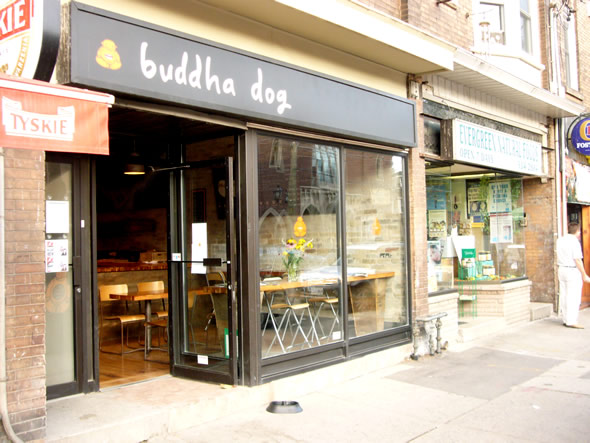