Bi Bim Bap is known for healthier, gluten-free versions of Korean rice bowls without sacrificing traditions. Even vegans can get one of these comforting meals here. Most importantly, don’t expect any fried eggs on top unless you ask for them.

Sam Lee opened his first location eight years ago on Eglinton West, and is himself intolerant to MSG, so had to figure out a way to make the hundred-year-old recipe for bi bim bap gluten-free. 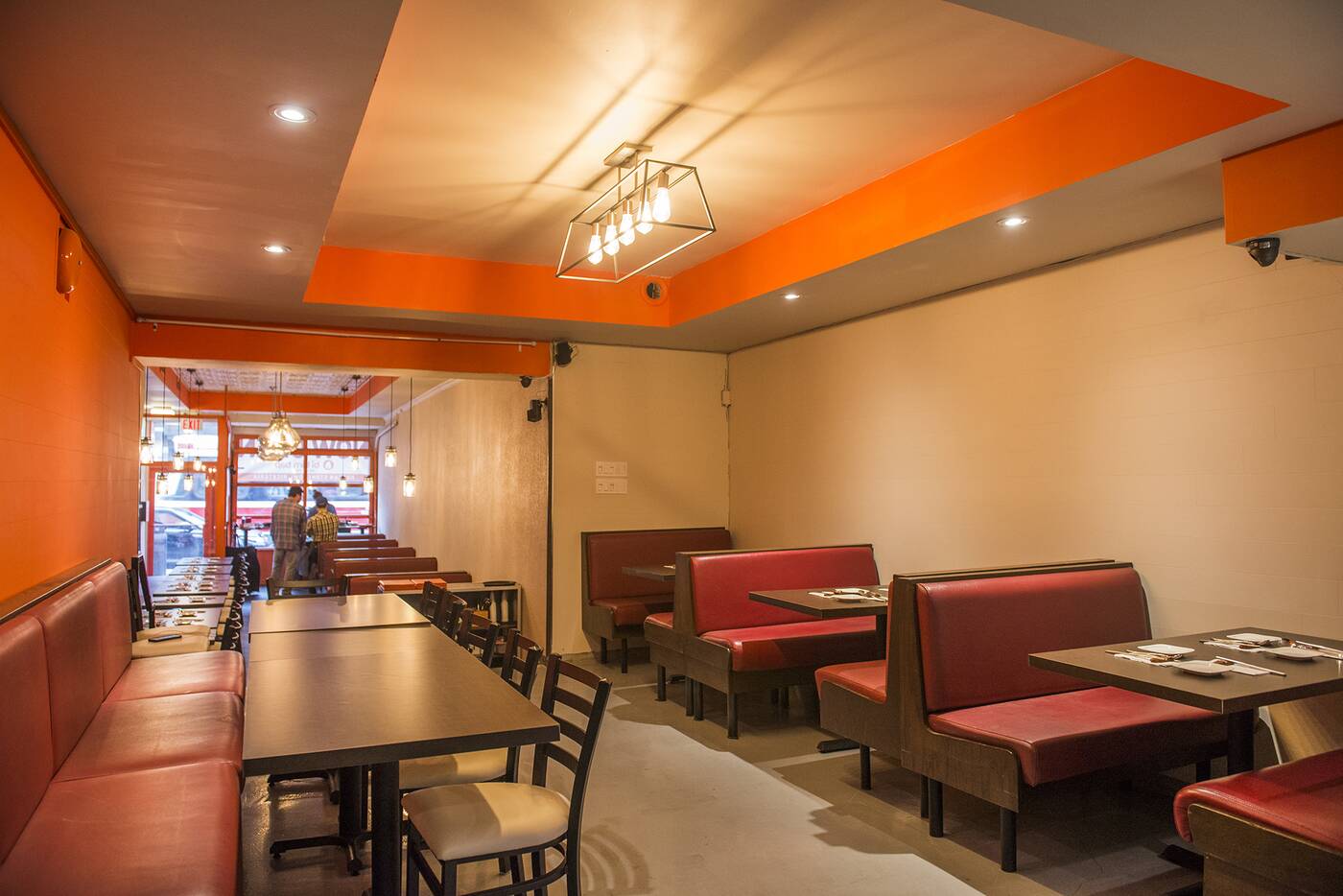 The long, narrow space has been home to a revolving door of sushi-ish restaurants over the years that have struggled to contend on this cutthroat corner. The interior is still divided into a front area and a back bar area up a few stairs, and has ultimately been simplified, walls one simple shade of burnt orange. 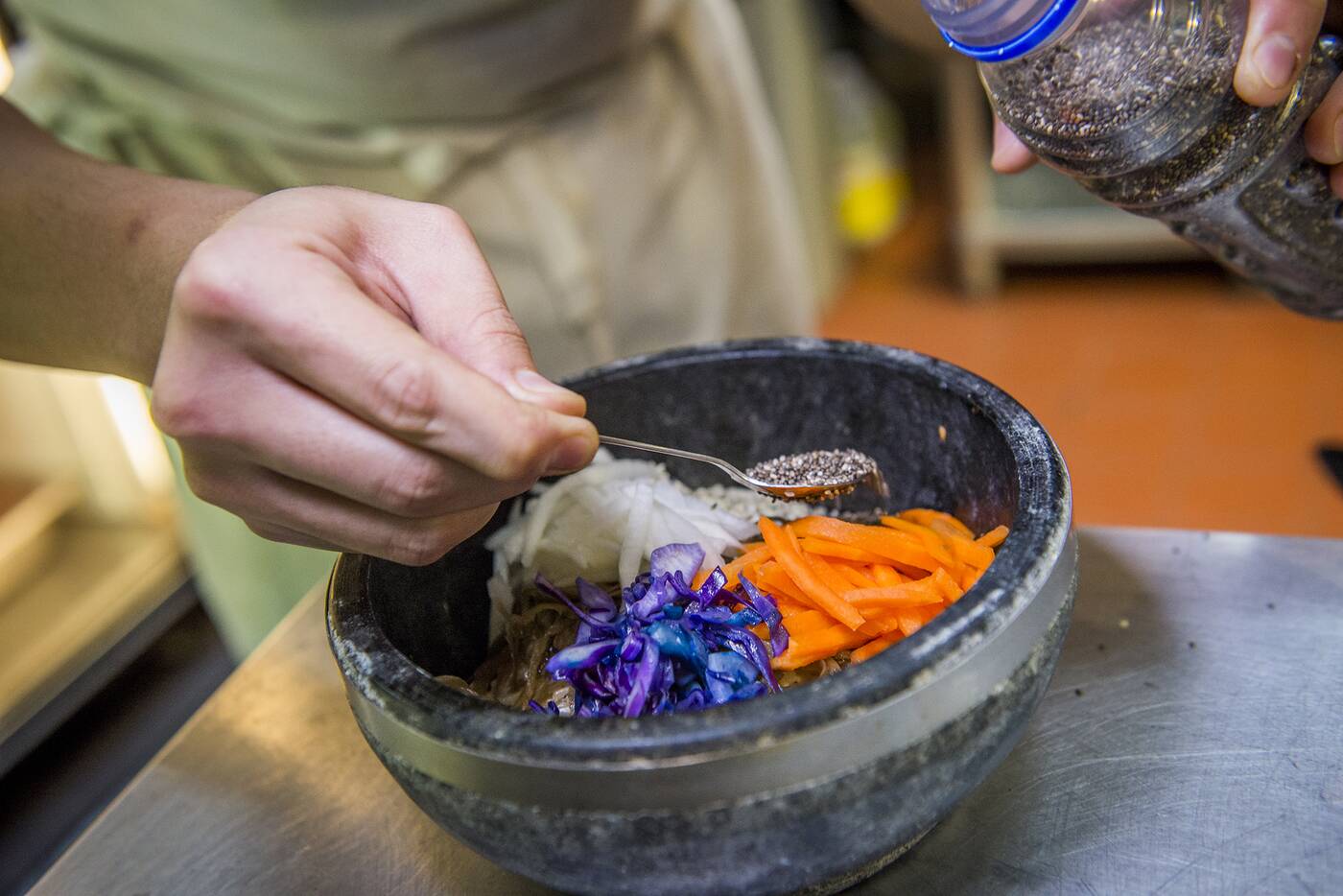 Bi bim bap is served in authentic stone bowls that keep dishes hot for an hour, made by a master mason in Korea from a special soapstone that contains tons of minerals. 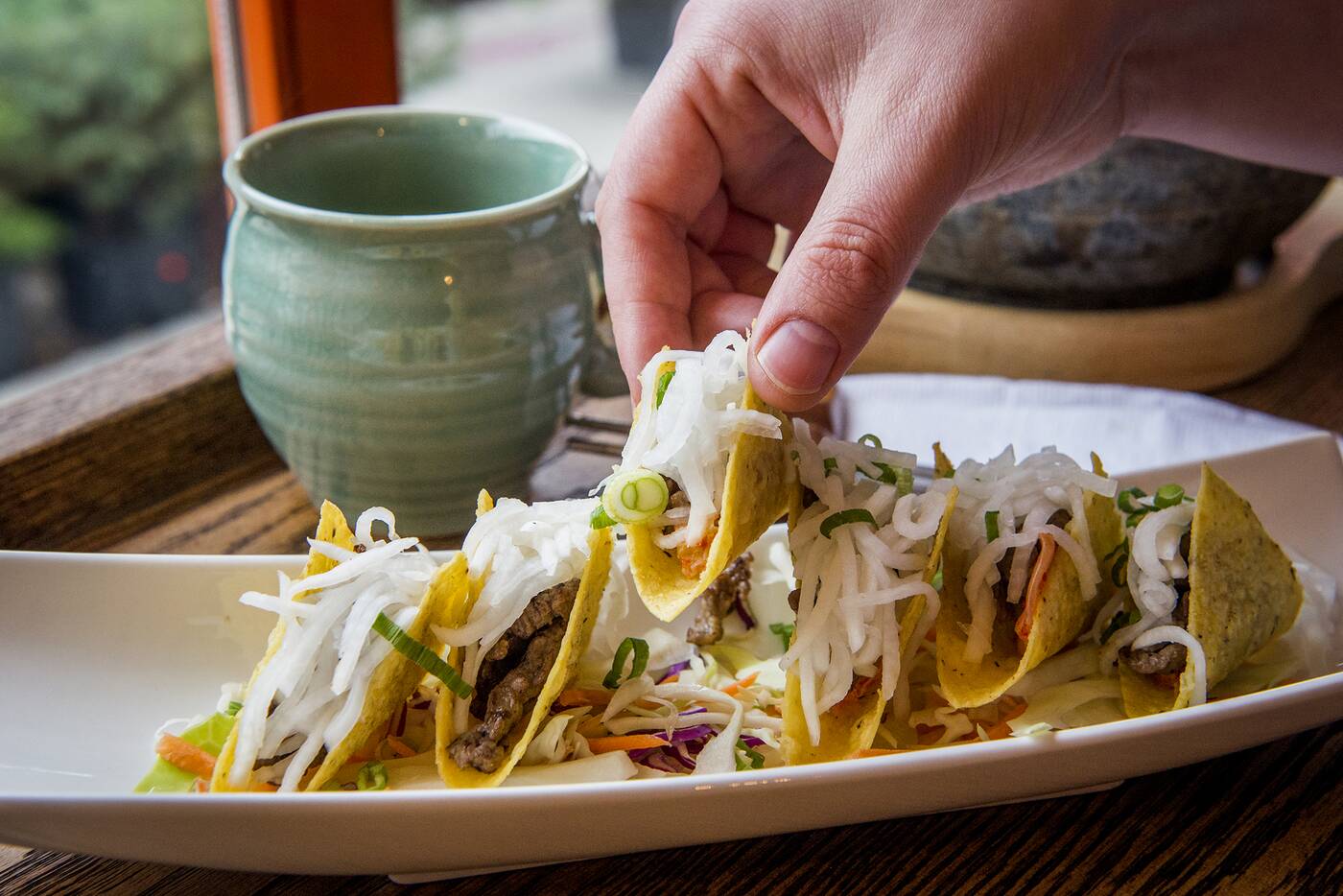 Korean tacos ($4.99) are an invention of Sam’s. Mini taco shells are stuffed with Korean BBQ beef, radish, and house vegan kimchi that uses fermented bean instead of fish sauce. 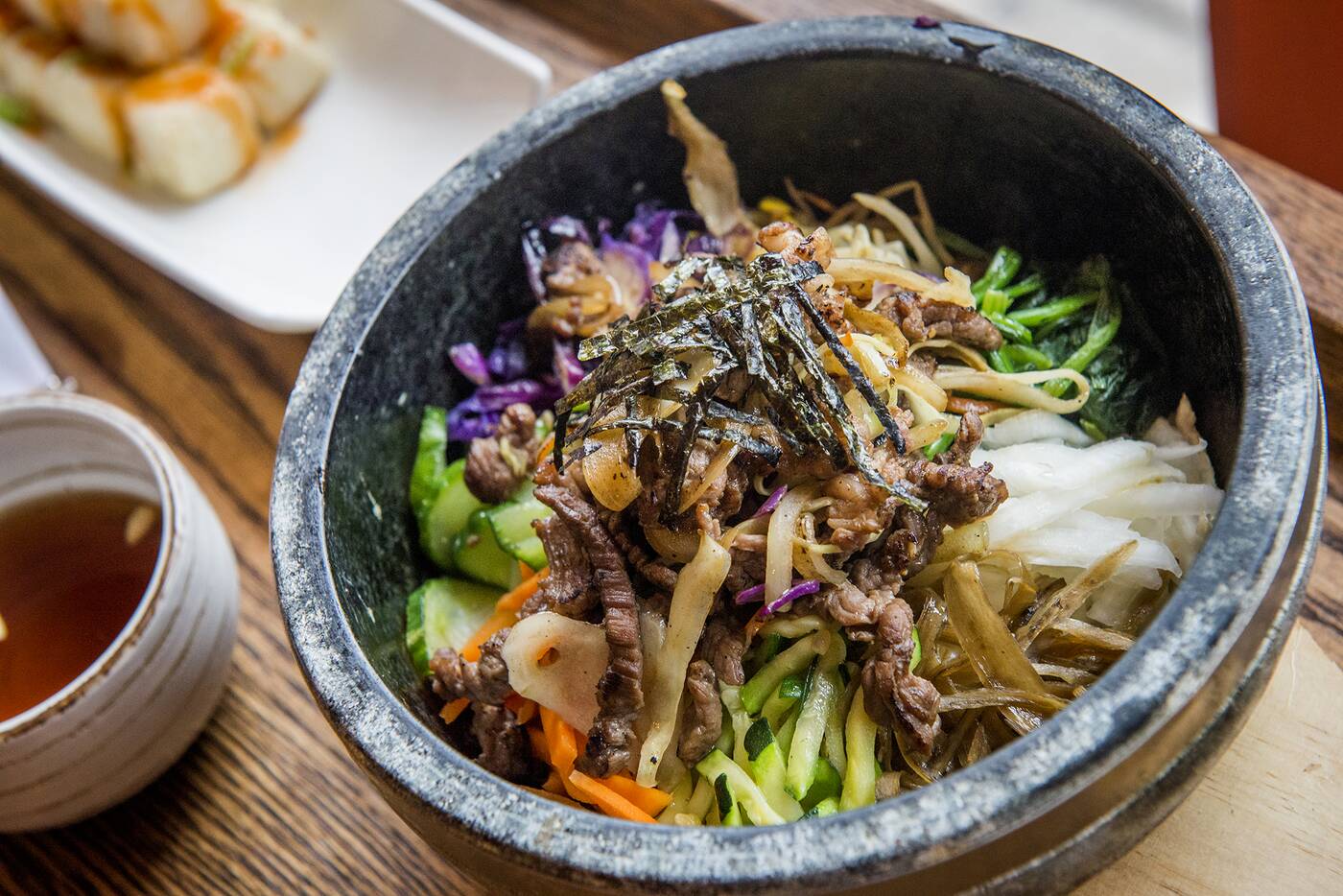 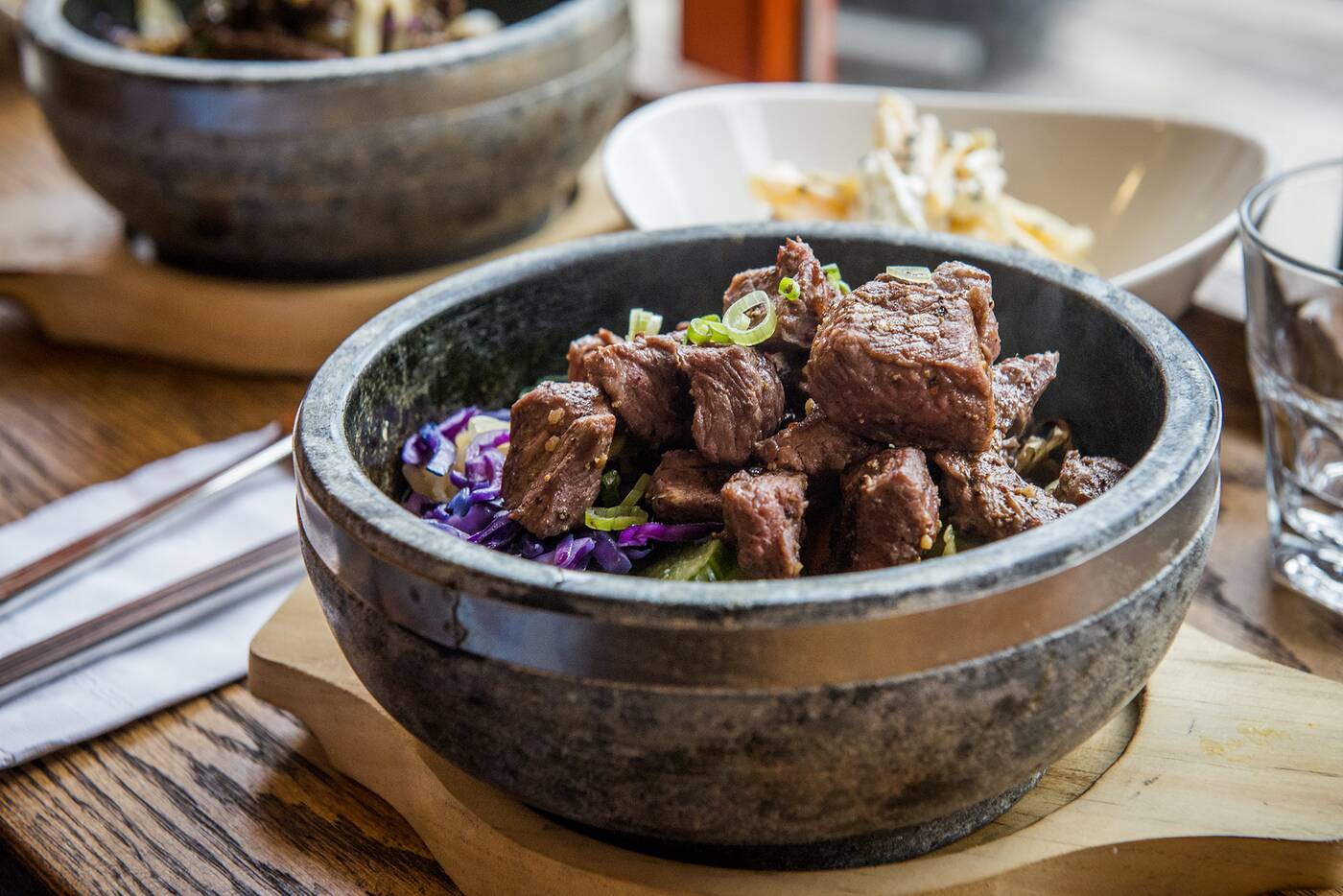 Steak bi bim bap ($20.49) takes it to the next level, cubing an eight ounce steak from the prime “blade” portion of the beef and cooking it to medium/medium rare. 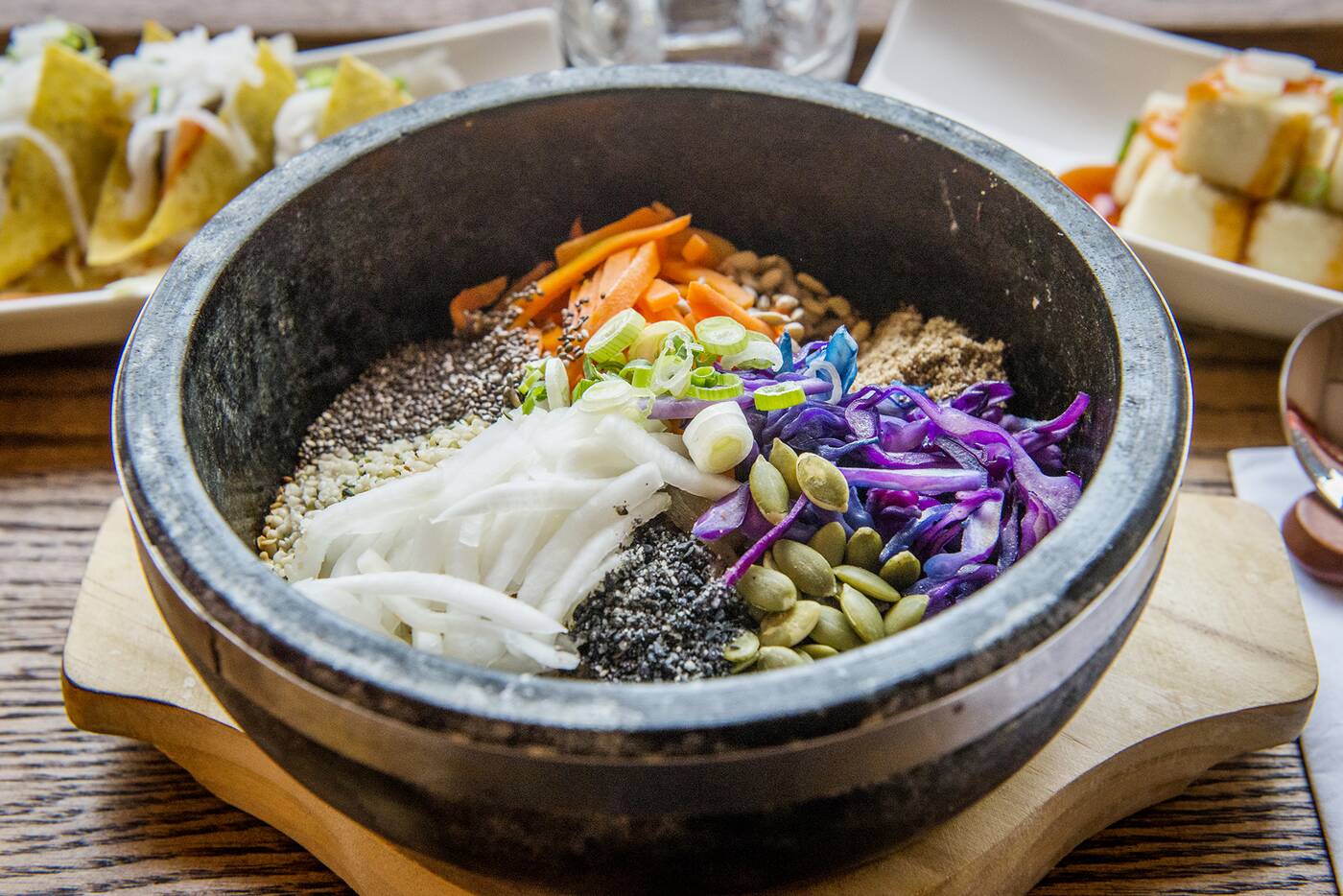 A vegan seed rice bowl ($14.49) swings in the total opposite direction, topped with six kinds of seeds, cabbage, radish and carrot. Soy garlic is suggested out of multiple obligatory house-made sauces. 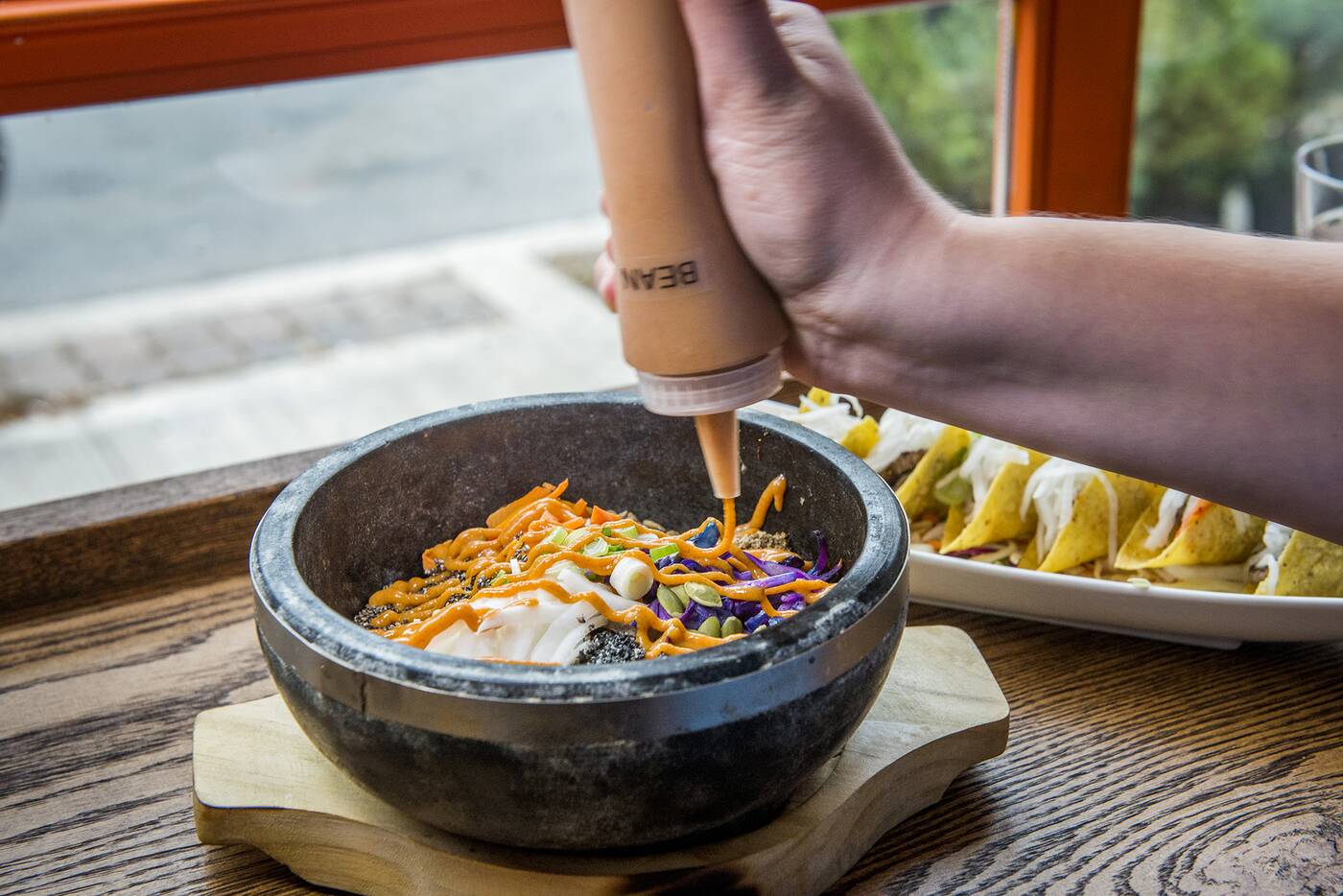 Bean sauce, for example, also apparently goes well with the seed bowl, and there’s even an apple hot sauce. 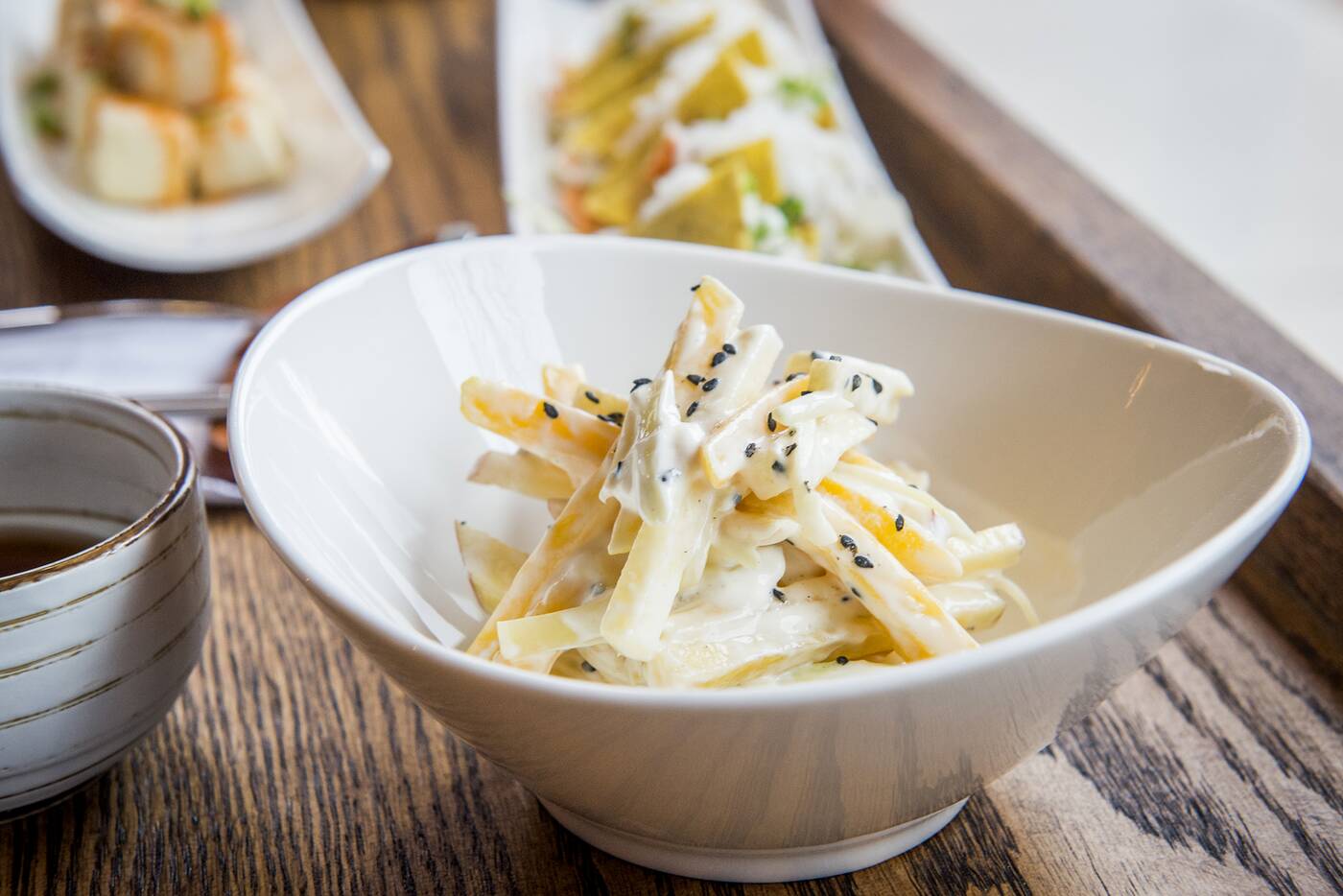 Pama salad ($4.99) is another creation of Sam’s, roughly named for the papaya, mango and apple it’s made from. Yogurt seems like an odd addition to an otherwise yummy dressing with ginger, lime and honey at this allergen-sensitive restaurant. 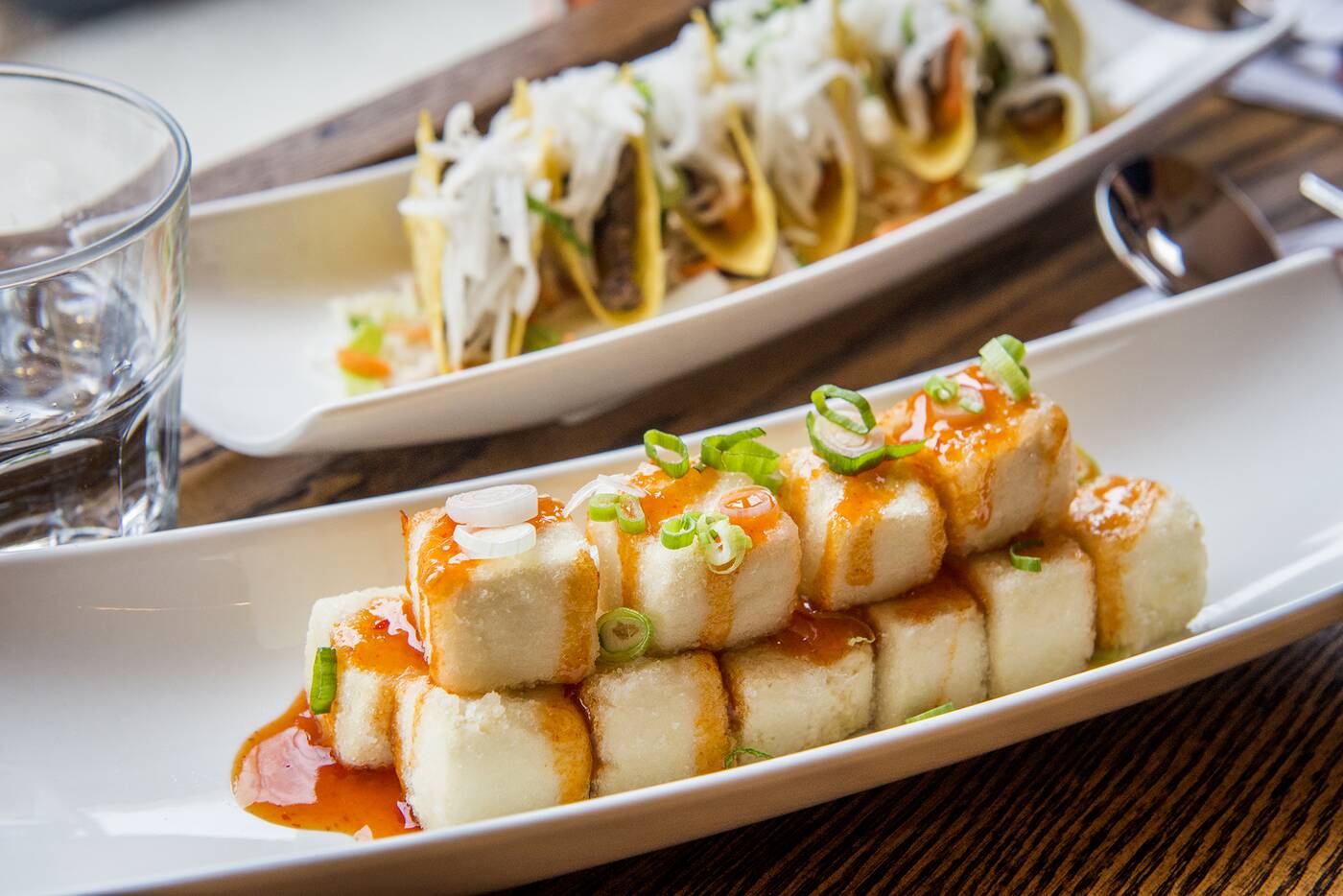 Lightly floured and fried organic non-GMO tofu with a spicy soy glaze ($4.99) makes for a light, crispy, sweet and hot side or vegan snack. 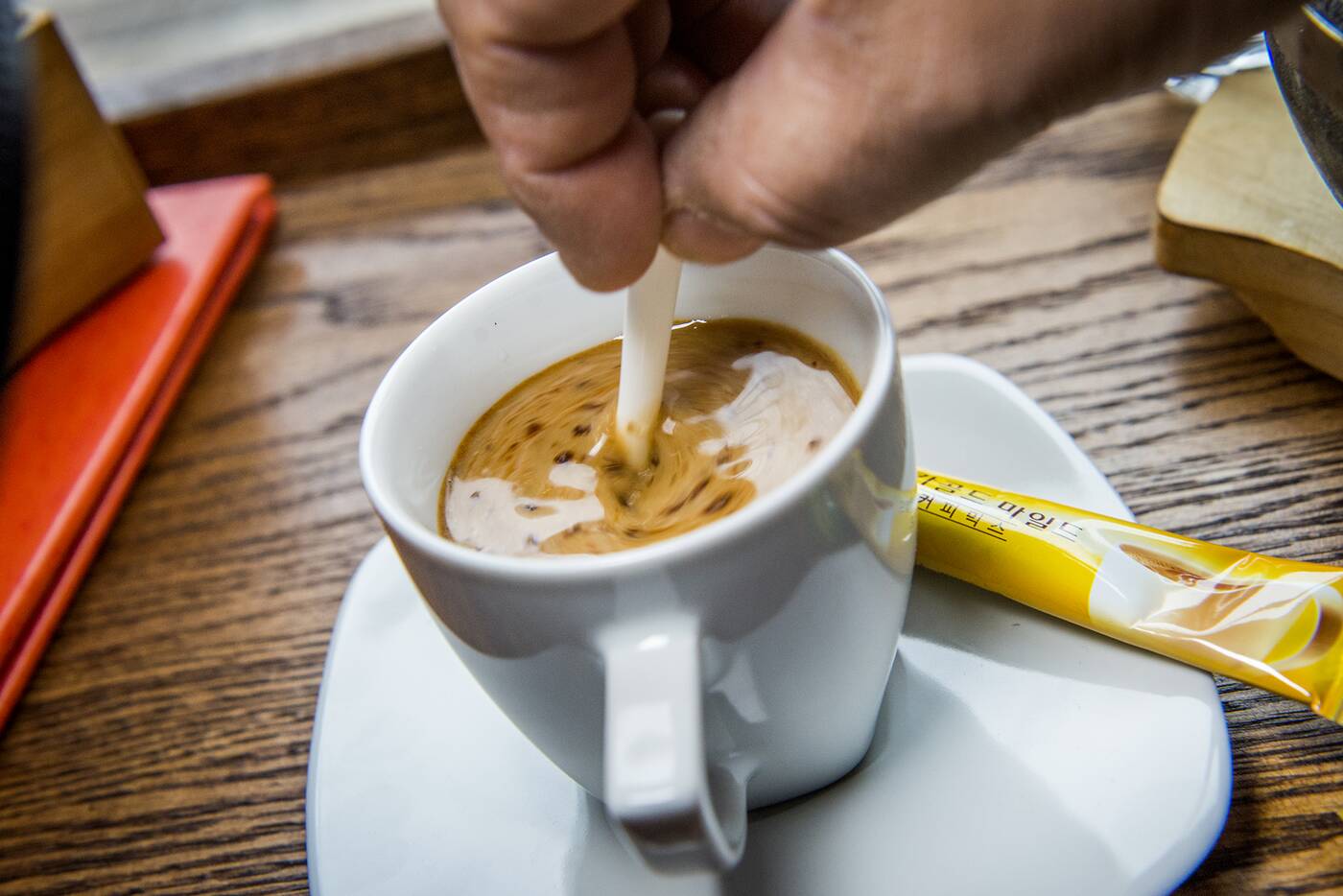 Accompany your meal with an Asahi, sake or soju, and cap it off with the coffee of choice in Korea, which comes in a tube ($2.49). 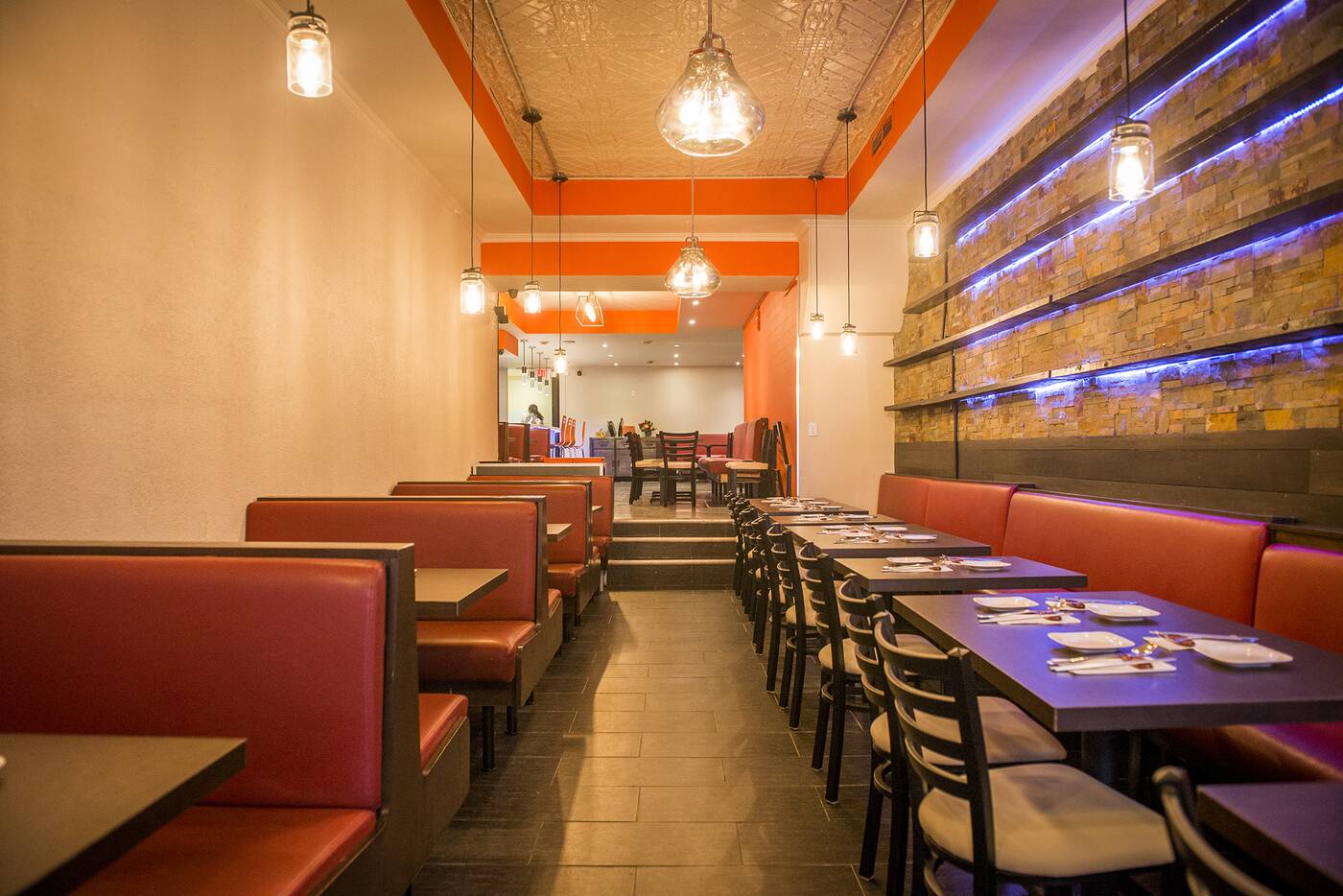 Lee has made a lot more of his menu organic and non-GMO over the years, now even offering gluten-free soy sauce. 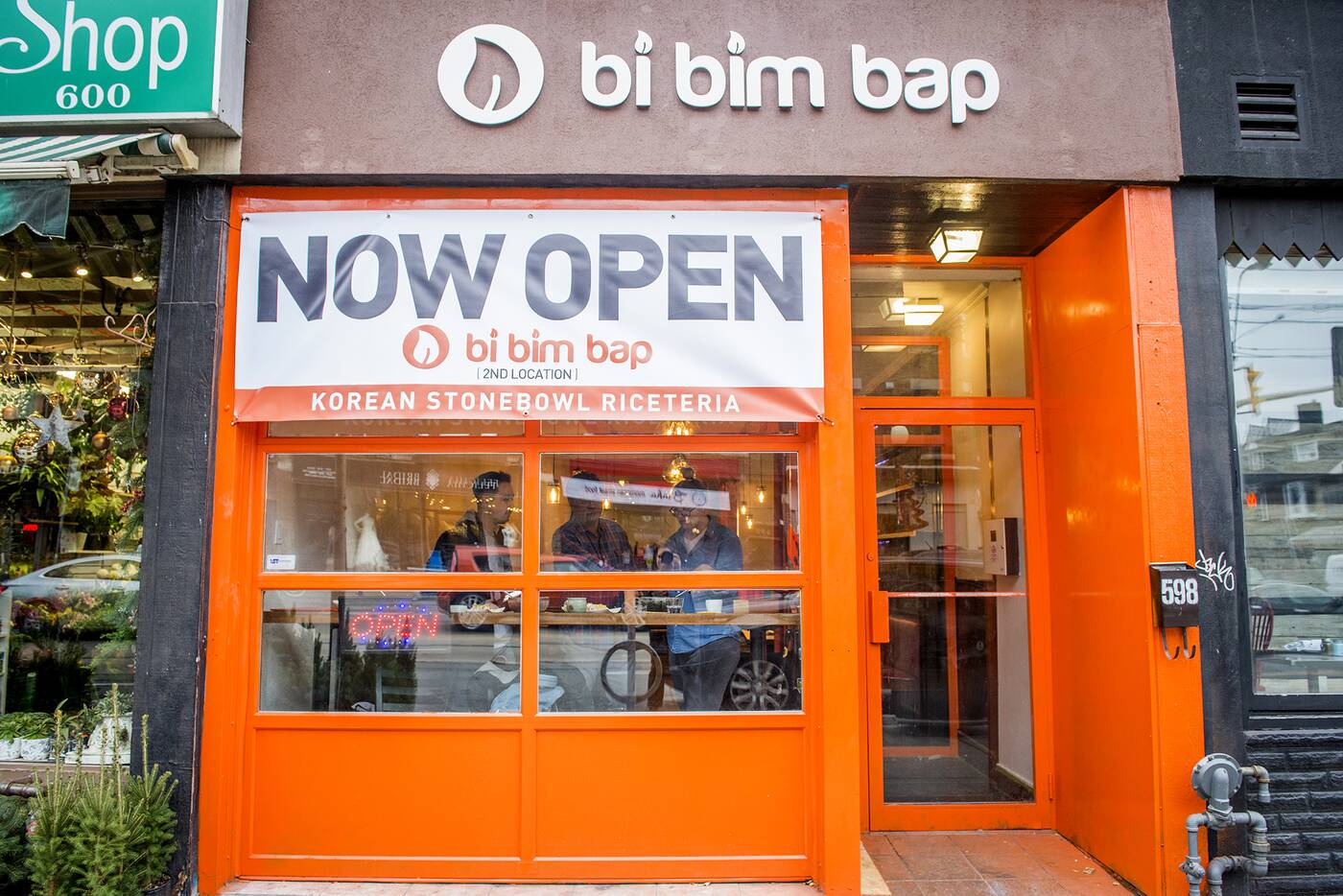