Bestellen is former Executive Chef of the Mercatto Group, Rob Rossi's, new restaurant. Located at Rusholme and College West, there's been a considerable amount of buzz about Rossi's new venture, due mostly to his stint on the first season of Top Chef Canada, on which he was a finalist. With a focus on beef, Bestellen boasts a playful menu that showcases updated takes on classic fare. This, in other words, is not your father's steakhouse. 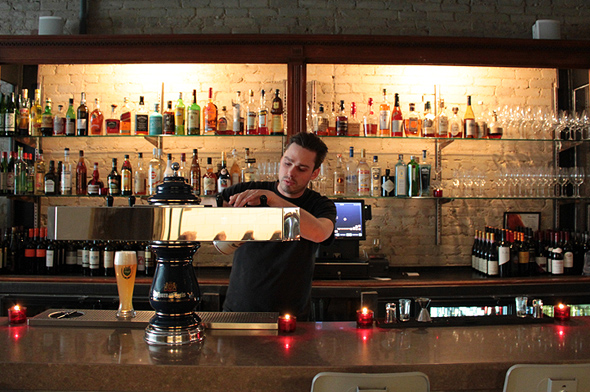 There's a fresco illustrating cuts of beef cover the main dining room wall. It's a bit Francis Bacon, a bit Carnival Barker, which is in tune with the carne-centric menu. Exposed harvest wood ceilings and amber-hued Edison lights lend a warm inviting feel to the spacious back dining room. The only contaminant to the subdued atmosphere would be the fluorescent lighting in the kitchen, which is a bit bright and jarring as it spills into the dining area. 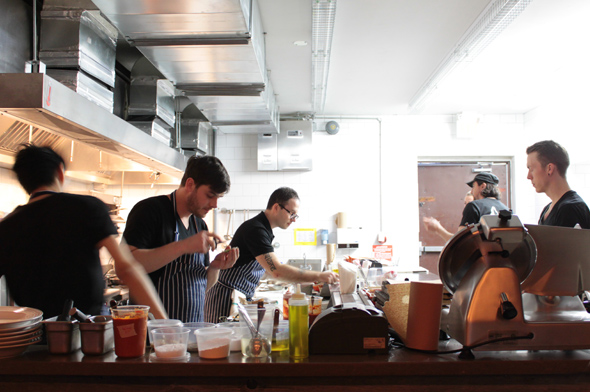 The Old Money ($11), a Bourbon based cocktail, includes aperol and a surprise in the form of walnut liquour. At first taste, it was reminiscent of a Manhattan but quickly finished on a nutty nougat note. Again, Rossi's humour shines with a six pack of PBR tall boys ($30) offered on the menu. Highlights on tap are the Hopf Weiss ($5.5) and Flying Monkeys ($5.5). There's also pretty much the top 40 for both bourbon and whiskey, but nothing beyond the LCBO. 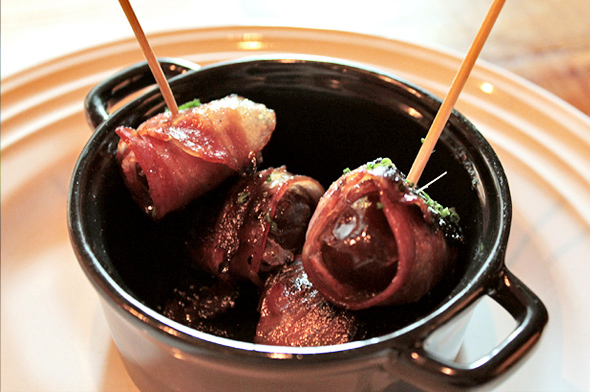 Devils on Horseback ($6), which is sorely quarantined to Christmas parties, is a favorite of mine. Rossi's updated devils omitted the stilton for dates macerated in brandy. The bacon still provided a savoury element to balance the sweet caramelized center.

The steak tartare ($13, see top photo) with an Espelette Aioli, olives and fried quail's egg was unlike most I've had. Refreshing and light with an herb mixture, we devoured it quickly with our brioche crostini. The one criticism that I'd make is that the herbs were a touch too fresh (yes, possible) and could have used a blanch to cut the chlorophyl note.

Salty, sweet, acidic and savoury, the Chorizo Stuffed Squid ($12) was my favorite of the three starters — a near perfect dish. Served over a plate of white beans, smoked tomatoes and a garnish of cilantro; every ingredient worked in harmony to create a sustained flavour. The only folly was that the squid was either cooked too much or not enough so it was a bit rubbery. 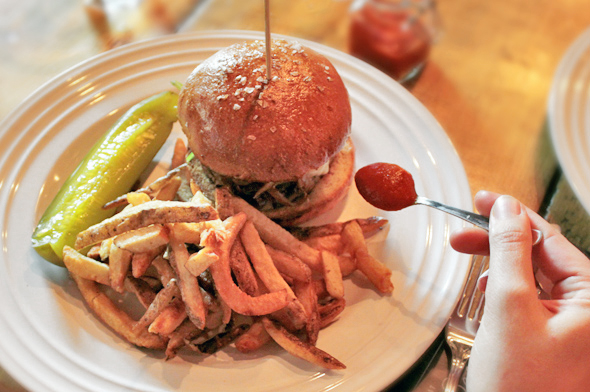 The Bestellen Burger ($18) comes with a steep price price tag, but with the addition of house made Brioche and Raclette, it may warrant the mark up. Crisp and buttery, the brioche bun made the burger a knockout. A definite crowd pleaser that's been dressed up in all the right ways. Pair it with a nice Bordeaux if you're drinking wine - yeah, it's that fancy! 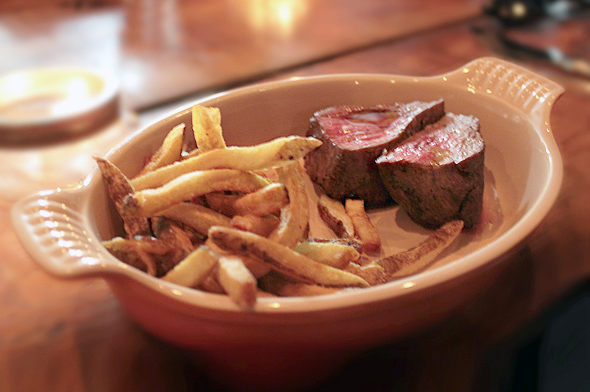 The signature dish is a Wellington County Prime Beef, aged and cut in house. The 10oz Tenderloin ($29) came with the choice of one side. I decided on the tried but true combo of steak frites. A friend went with brussel sprouts and pork belly, which I later regretted not ordering after stealing a fork full (don't let this happen to you). The steak was cooked to perfection, sous vide, which magically turned this loin into one of the best I've ever had — and this without a crust, given that it was never grilled or torched after it's bath.

Alas no dessert this time. We were full and loaded.

One of the standouts about Bestellen is Rossi himself, laughing and joking with the prep line. That's not a sight you'd usually find at a recently opened restaurant. It's clear that he's having a blast with Bestellen from soup to nuts. 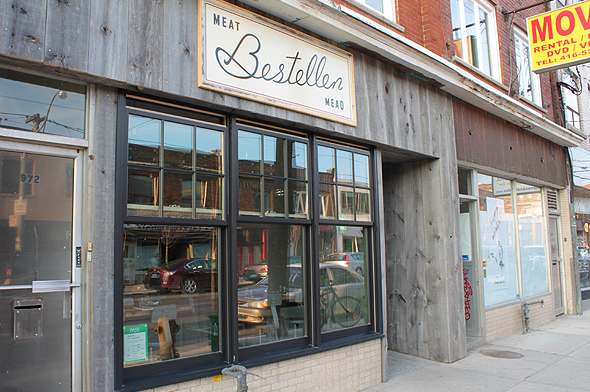