This new venture is headed by Scott Vivian and Nathan Middleton, two experienced chefs who've been making their mark on Toronto's culinary scene for years. 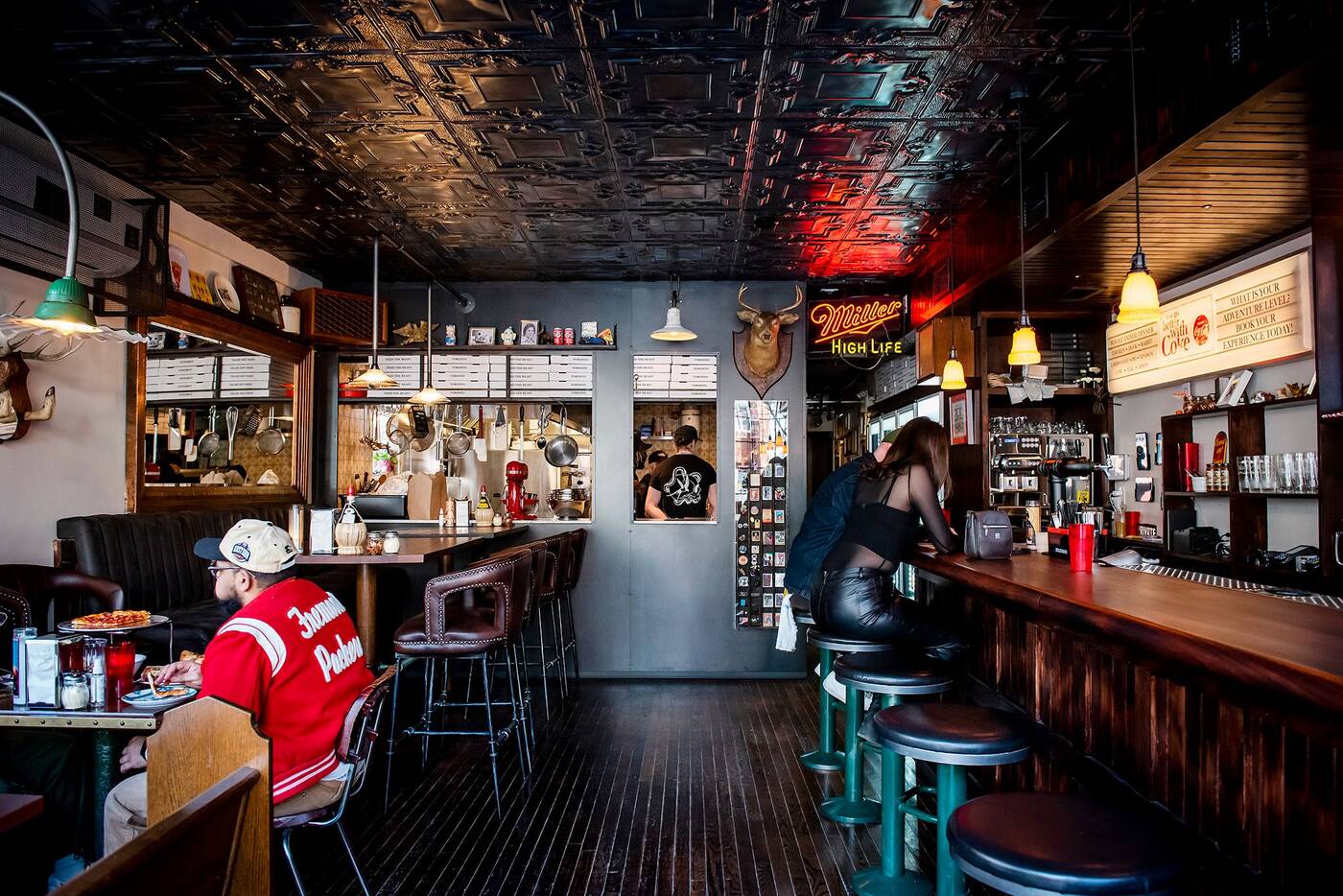 The building where Beast Restaurant stood for a decade was entirely renovated and now serves fresh pizzas, pastas, and other Italian-inspired starters.

Beast Pizza has an old-school pizzeria type character, sounds of Frank Sinatra echo from a record player that sits on a big wooden bar counter that was newly built in. 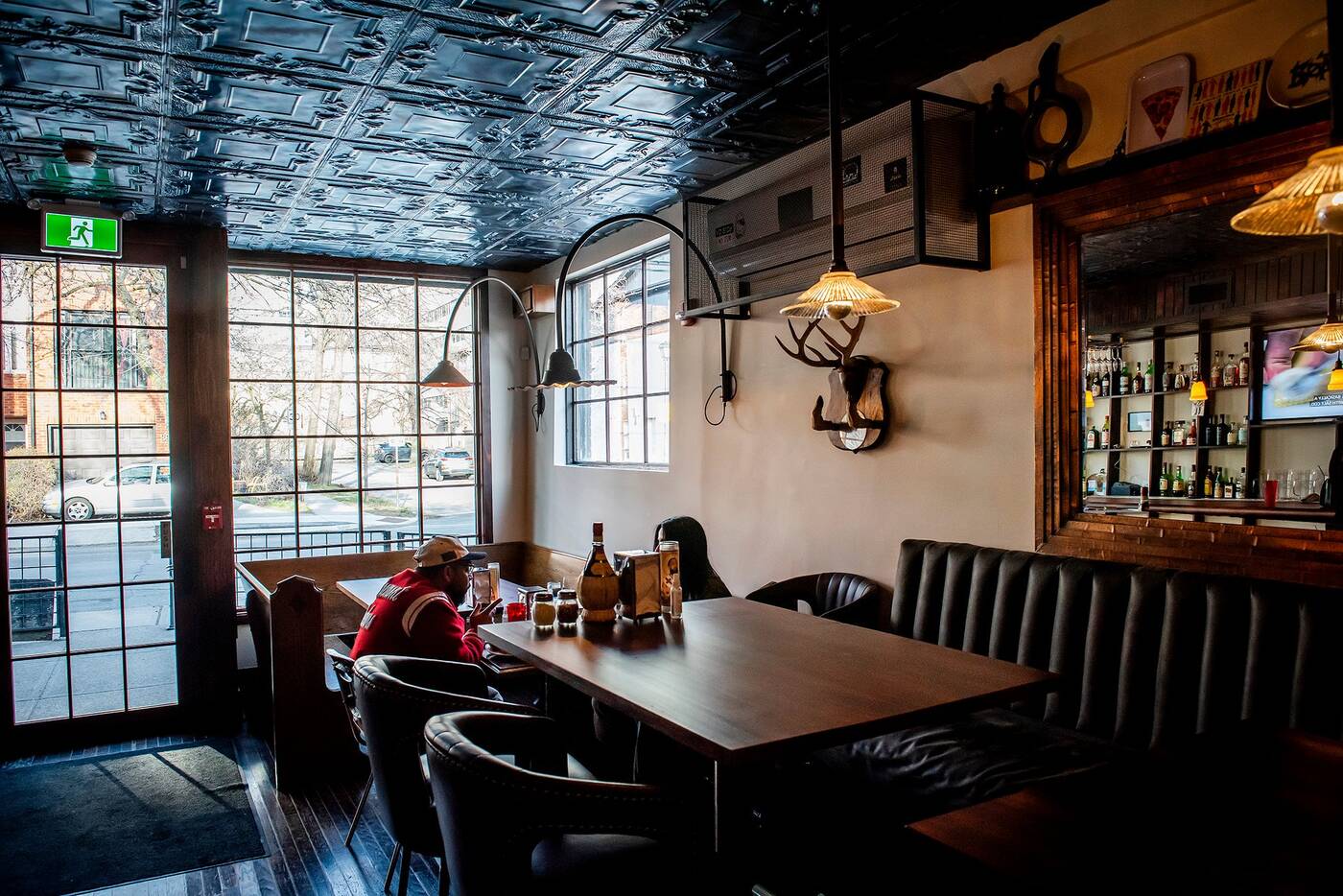 Large circular booths create ample seating for those looking to share a few pies without awkardly reaching over one and other for a slice. 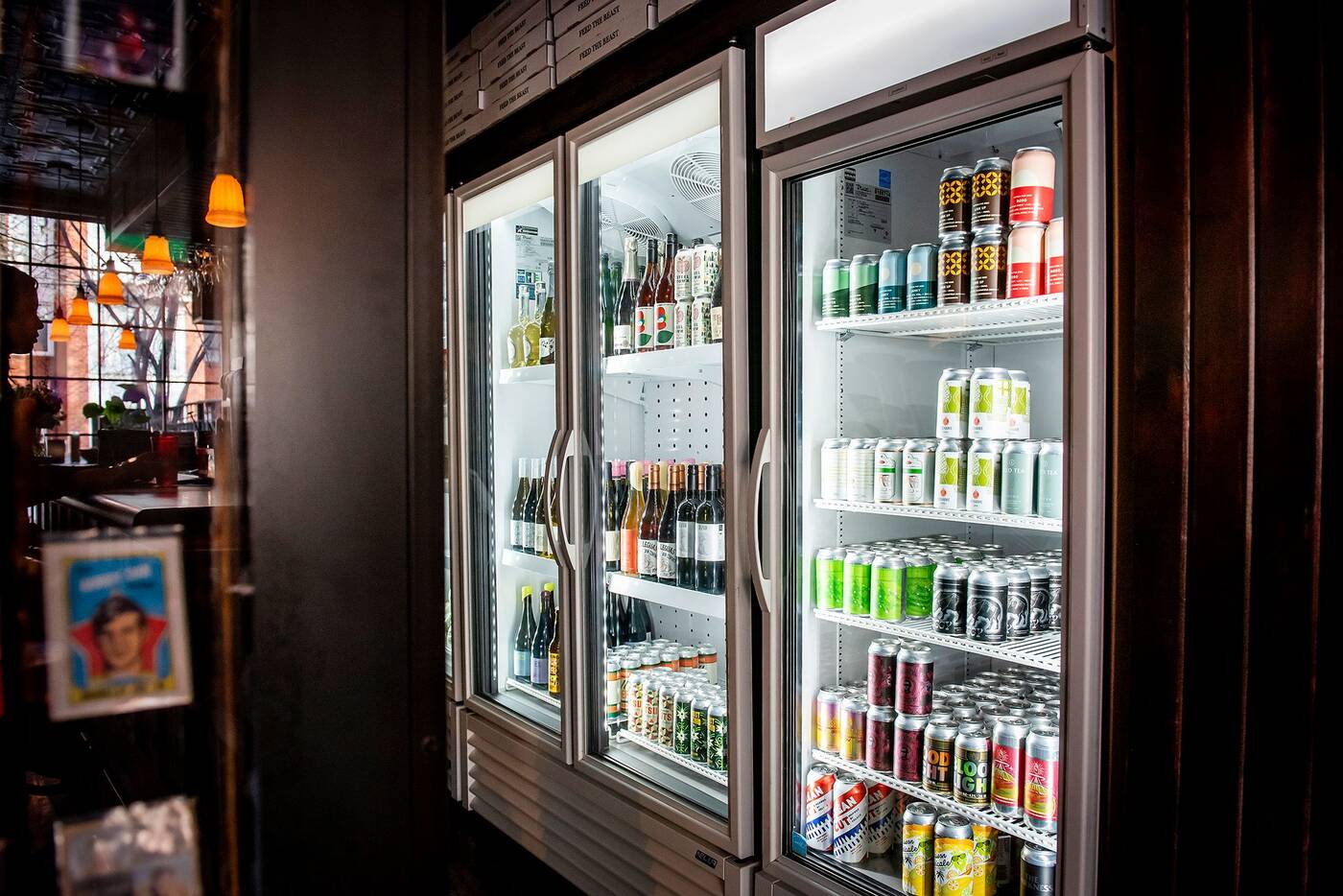 If you're just looking to pick up a pizza, check out their wide selection of rare natural wines and craft beers. You can get a can for half-off when you order takeout, and many of them won't be found at your local LCBO. 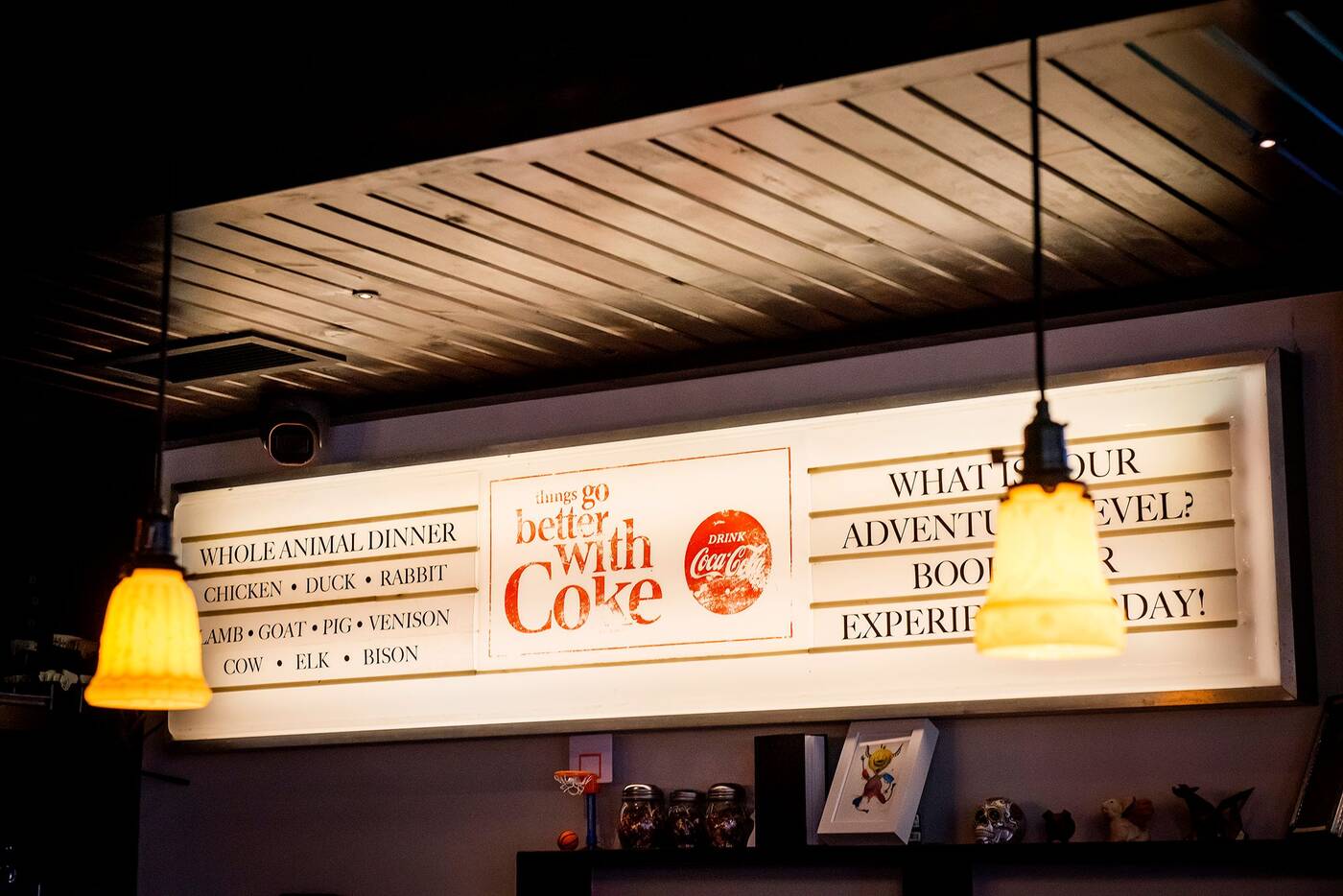 You can still make a reservation at Beast Pizza to experience whole animal dinners ($150.00 per person), where you'll get five courses of any meat you want: beef, chicken, bison, etc. 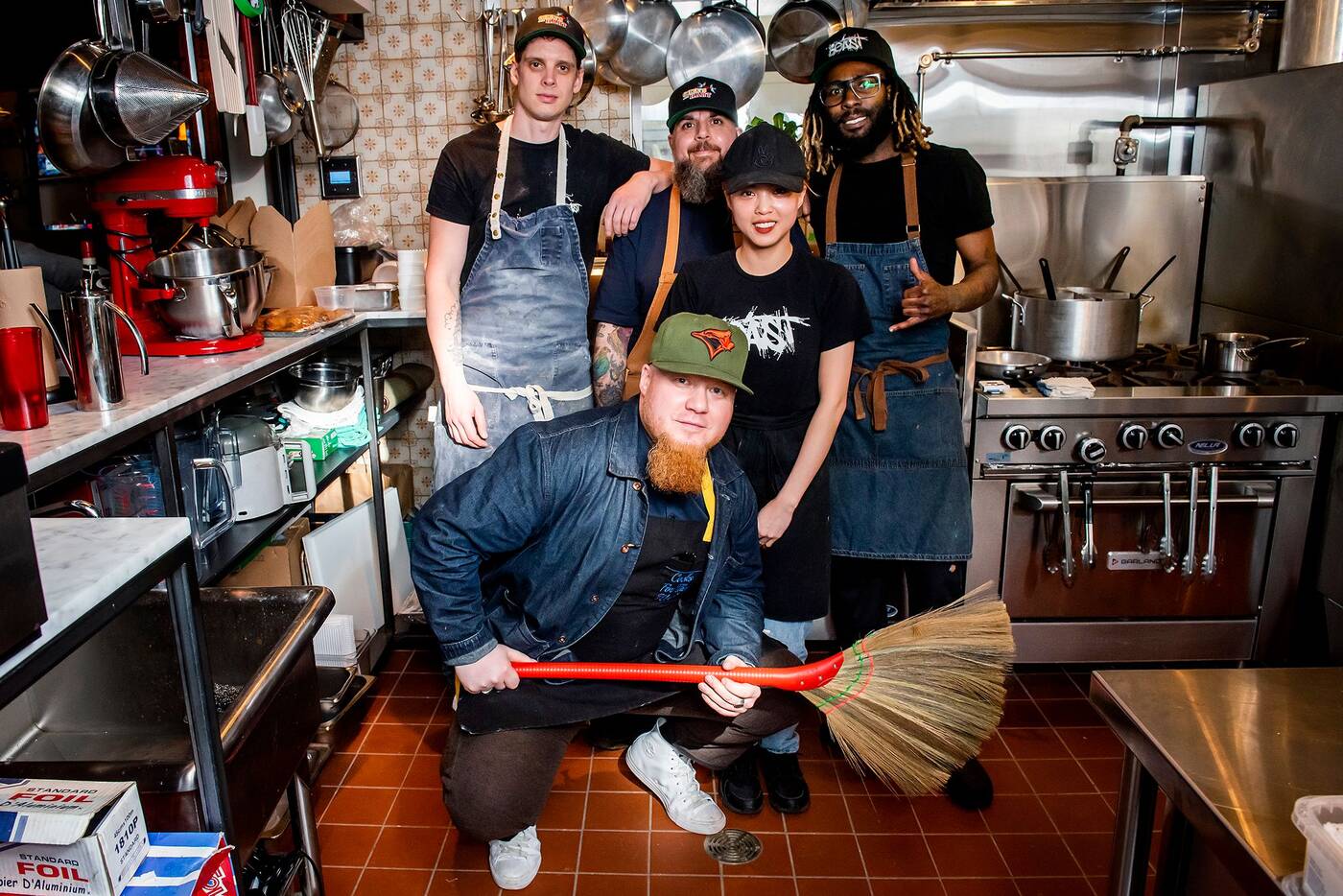 Tell your server that you're "feeling adventurous"and you'll get some pretty wild offerings based on your animal of choice, including brains, liver, or heart. 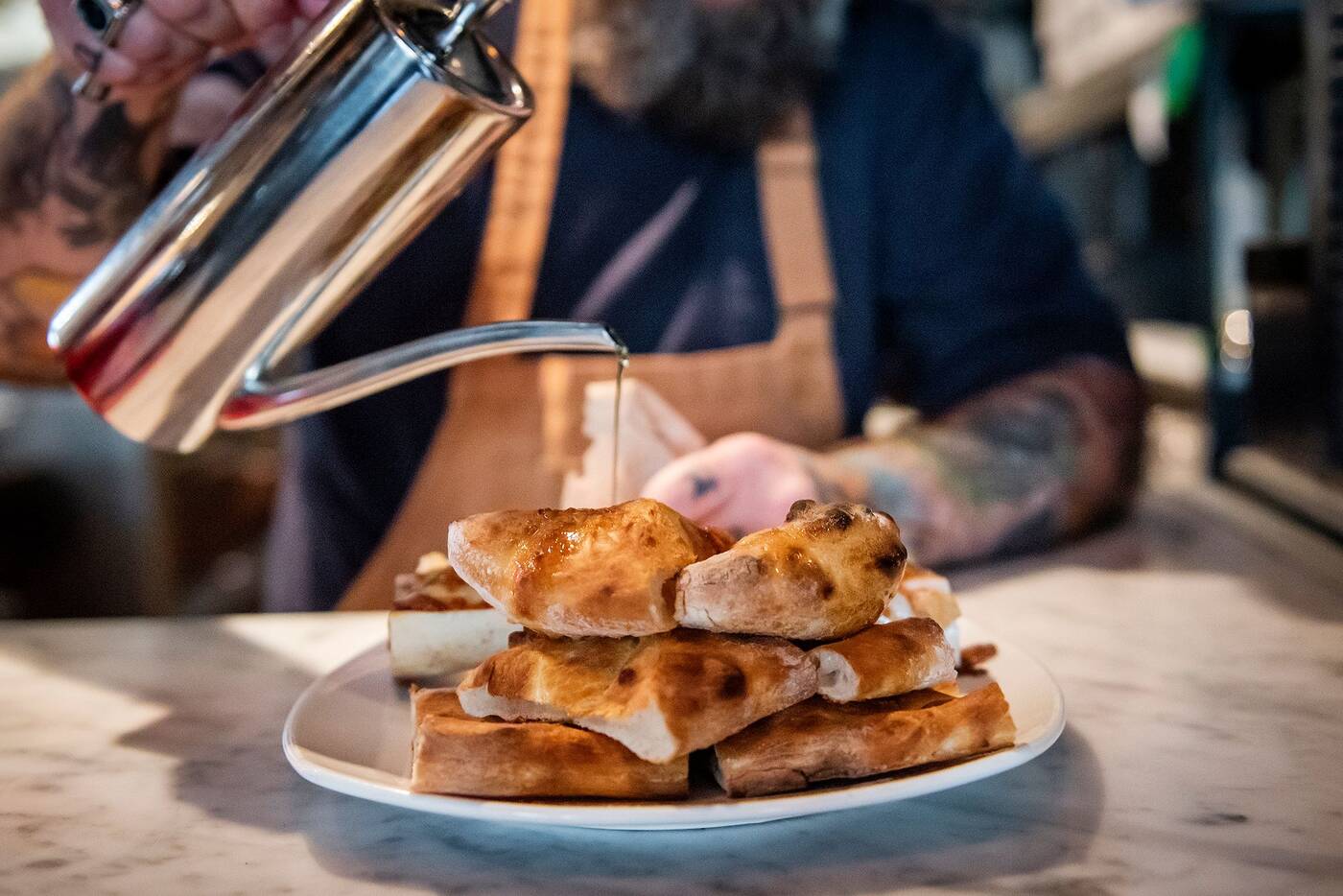 Those who are less daring will still come to embrace the menu at Beast Pizza when tasting their New York-style foldable slices.

That same shock-value that the Beast brand was known for with their whole animal dinners has transitioned to their new menu in the form of bone marrow and beef tongue. 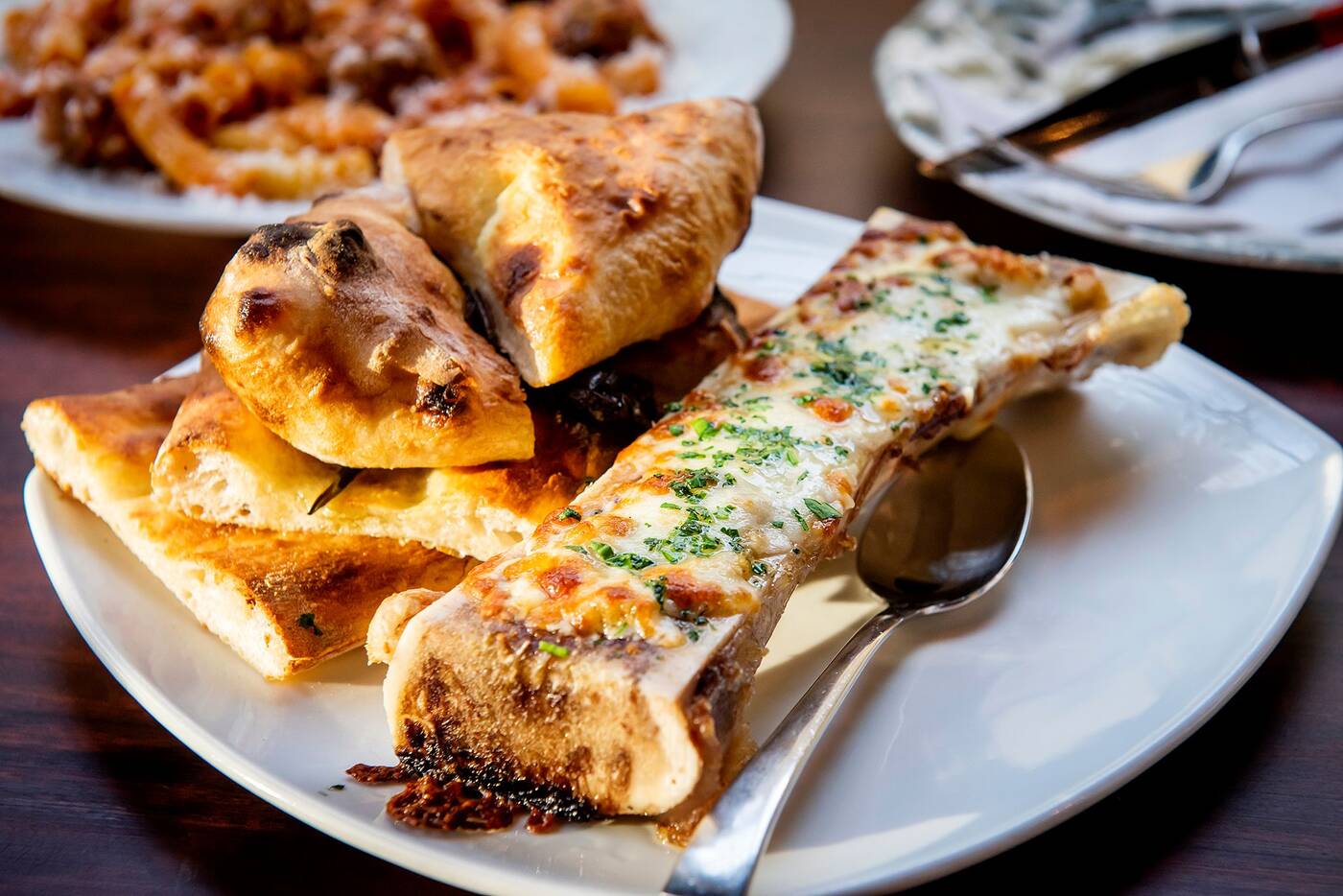 We started off with an open mind and ordered the cheesy garlic bone marrow ($28.00), served with focaccia bread that's sprinkled with sea salt and rosemary. 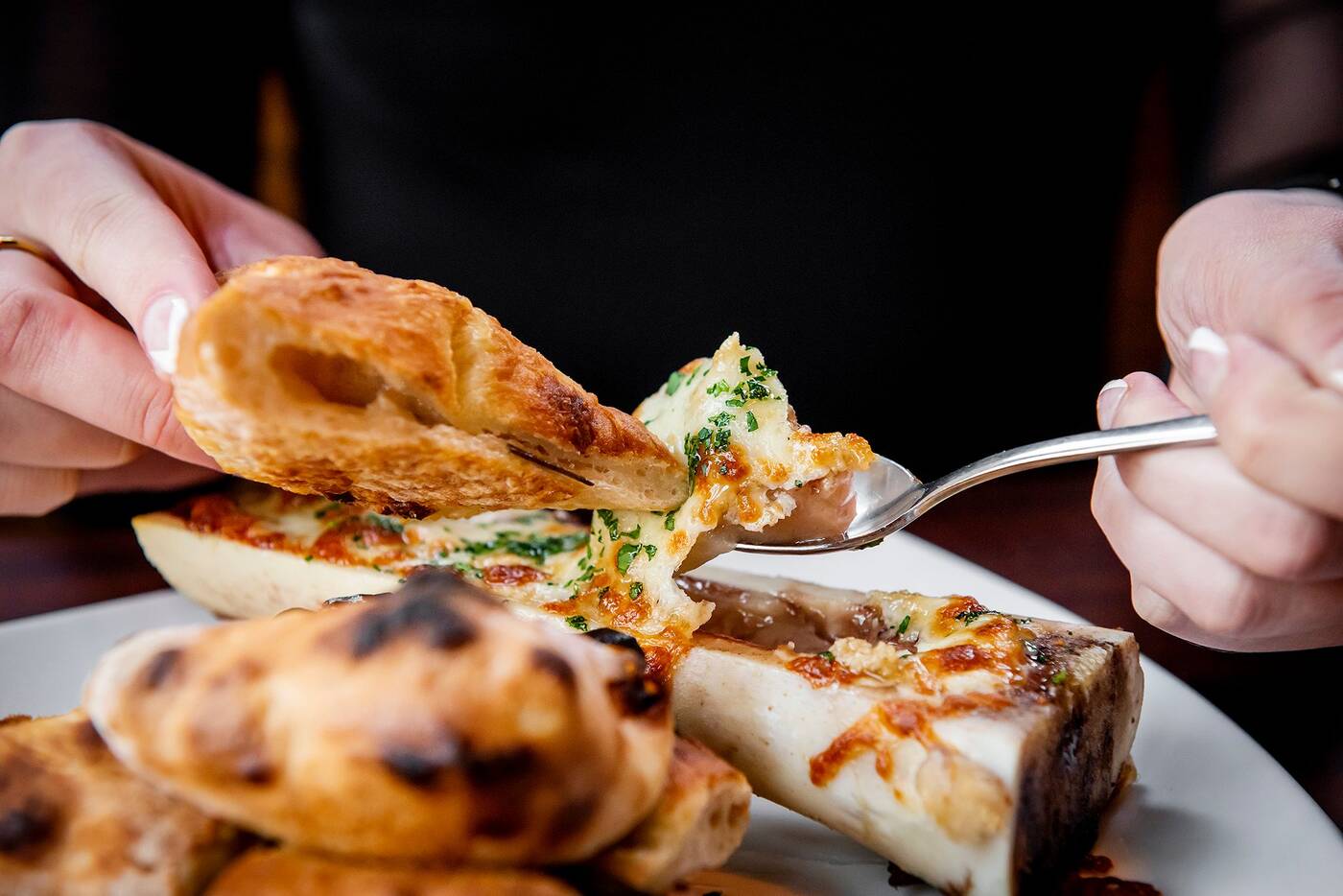 Use a spoon to scoop out the tender marrow pieces that melt in your mouth. It resembles the taste of butter which helps it pair nicely with each slice of bread. 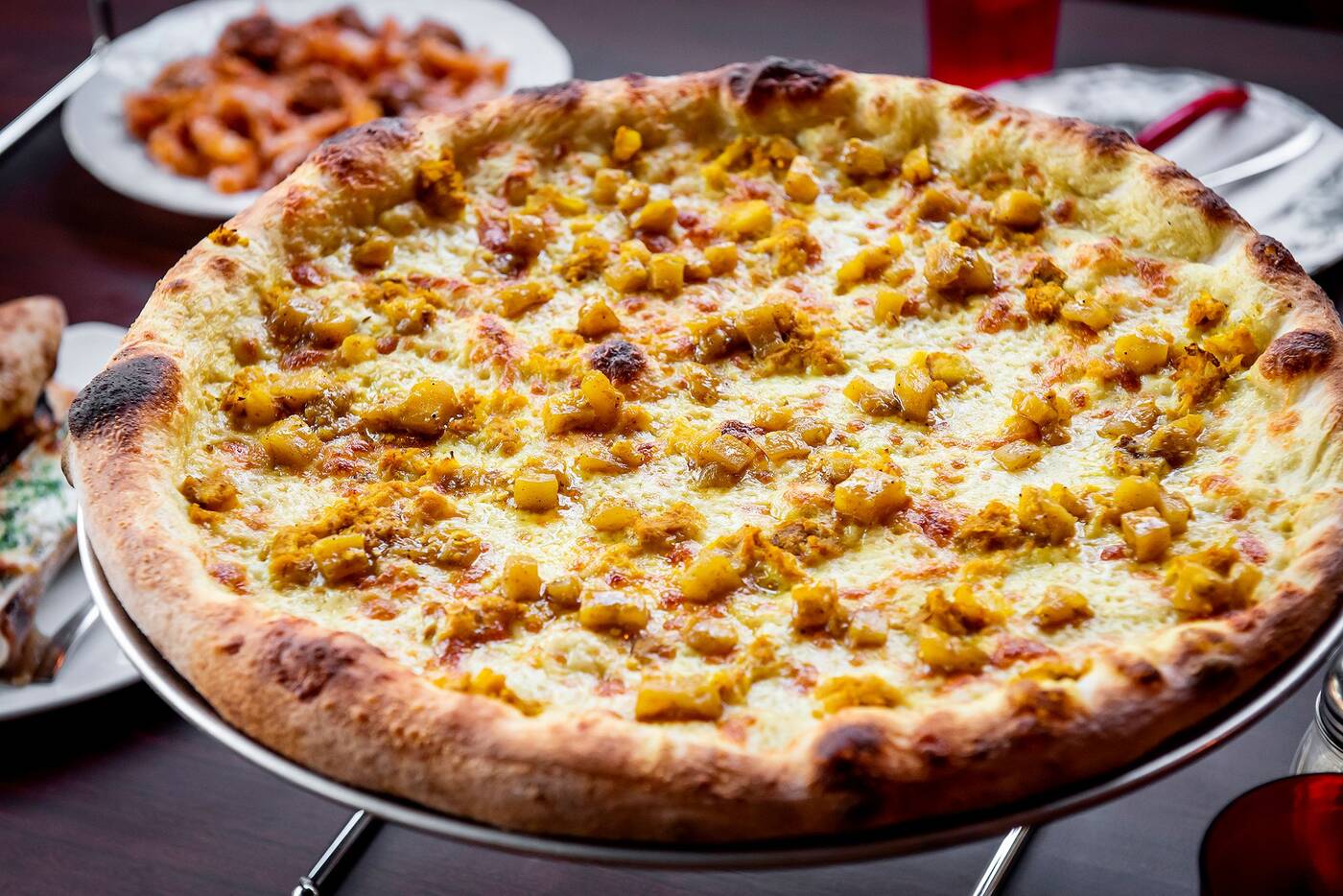 The pizza here is *chef's kiss* coming in 12- or 16-inch sizes. We went big and got the Aloo Gobi ($31.00) that comes with 12 slices. Cauliflower and potato curry is baked into a base of mozzarella and coconut milk white sauce. 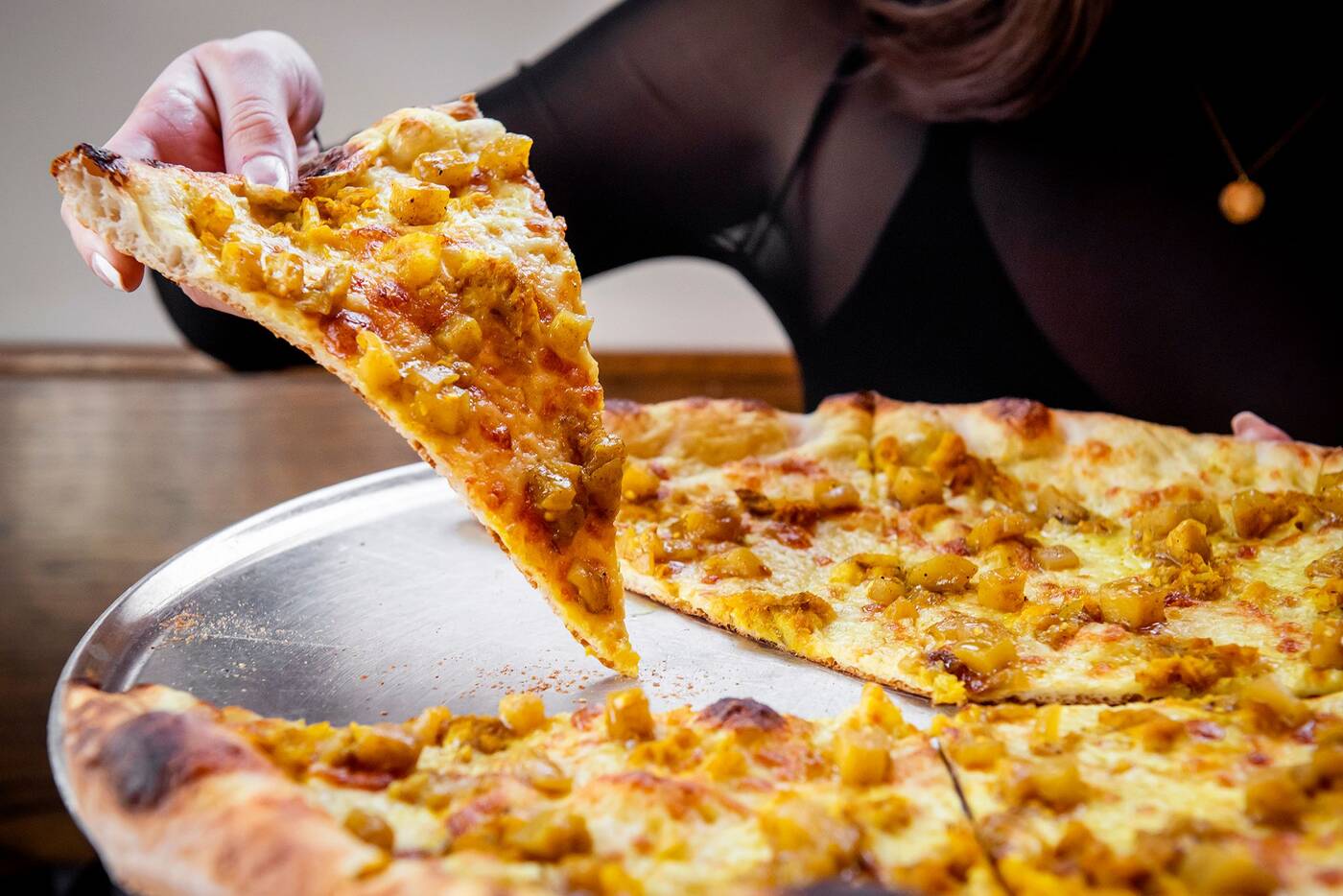 Brinjal pickles, best described as an eggplant chutney, are dotted around the pie, coming together to make a sweetly satisfying spin on a regular pizza. 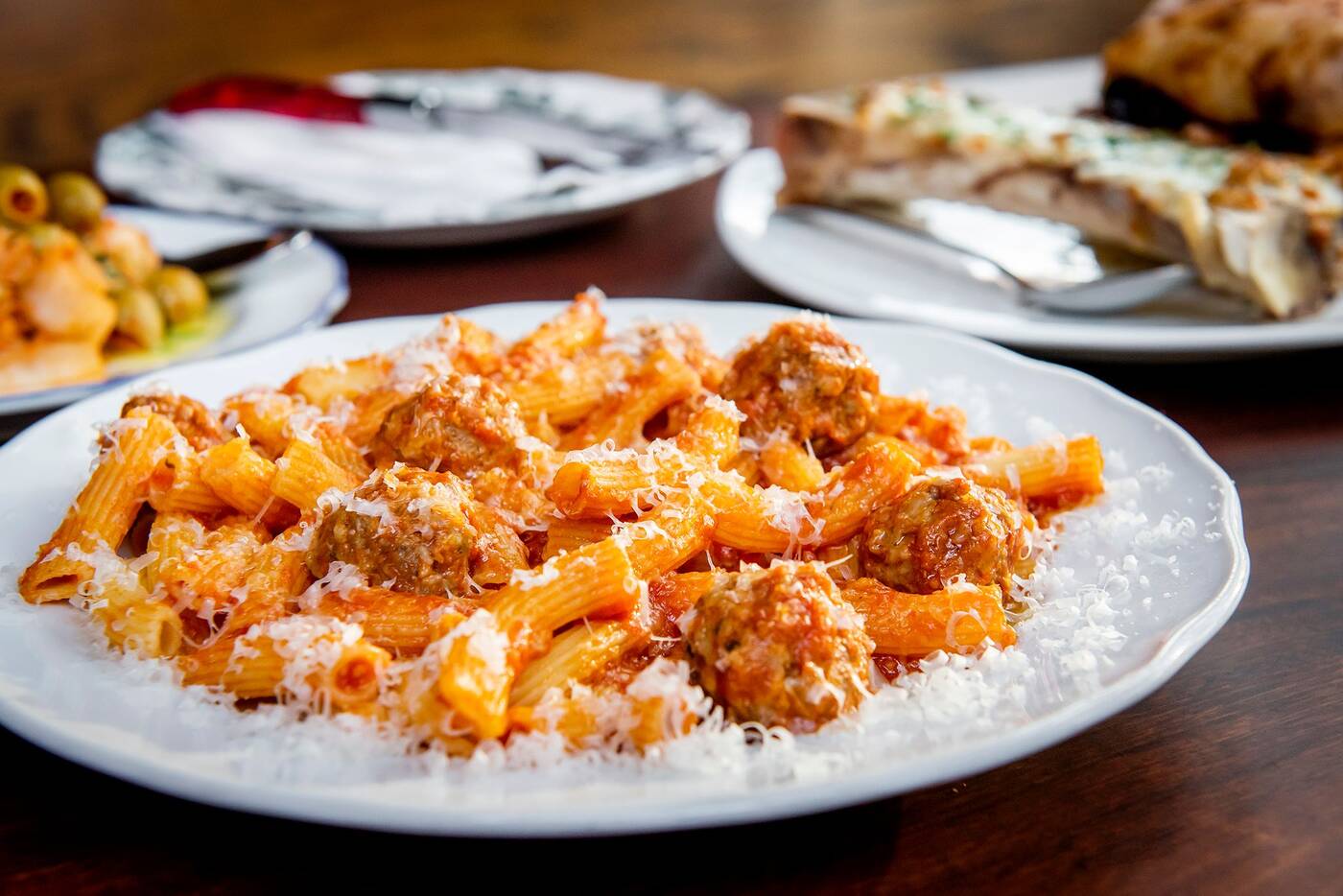 If your carb of choice is a pasta, you can pick between full and half sizes at Beast Pizza. A full version of the Maccheroni and Tiny Meatballs comes to $23.oo, with the smaller version of it at $11.50. 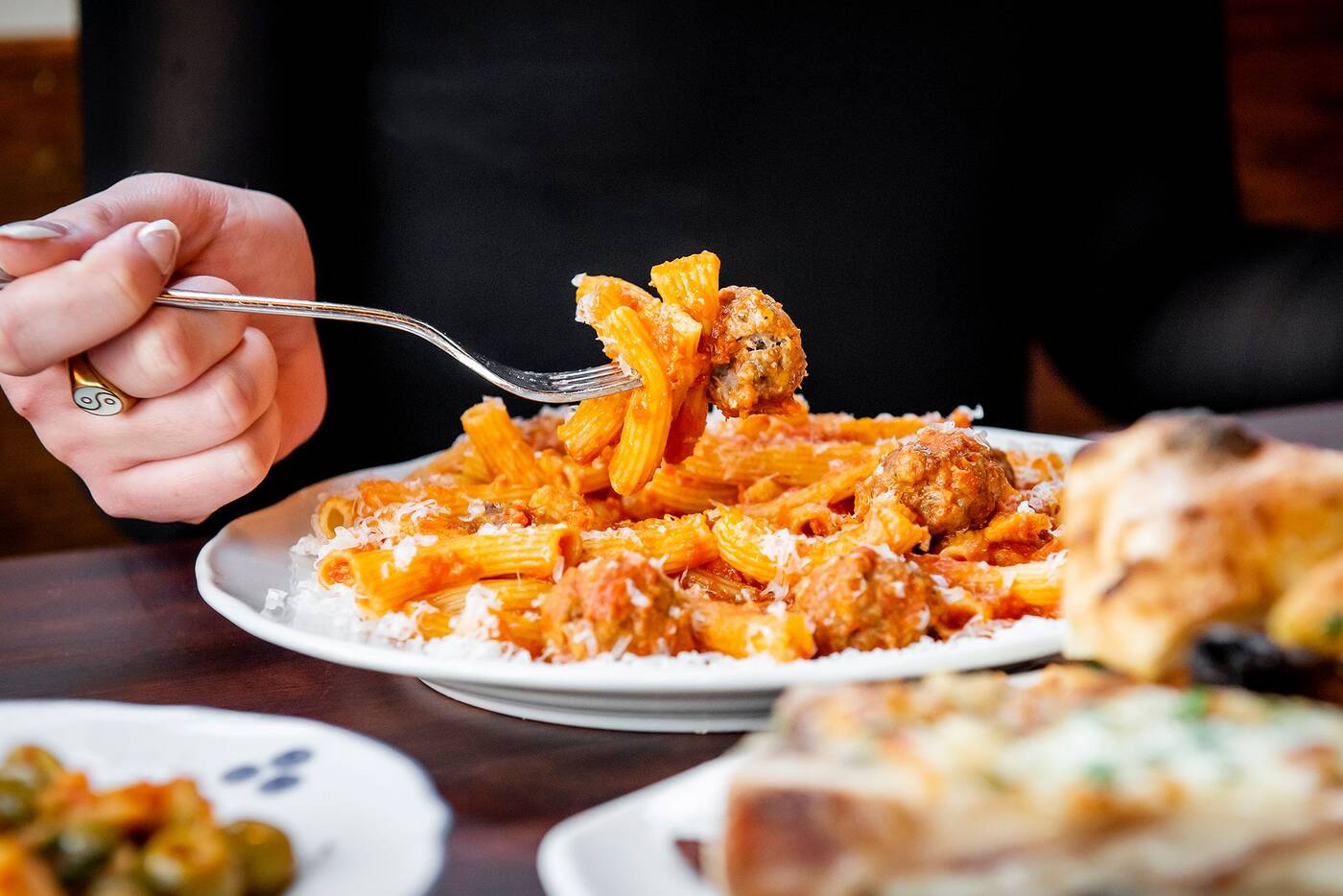 Italian for macaroni, these maccheroni noodles are tossed in a tomato sauce made with kombu, a Japanese seaweed. Then cooked in a pan with meatballs and garnished with cheese, simple and gourmet.

Tongue and Bacon Pizza ($32.00) is the perfect option for meat lovers looking to be adventurous. This one is built with regular pizza fixings: tomato sauce, mozzarella, smoked bacon. Then, slices of beef tongue add an unexpected twist of hearty flavour.

But, nonetheless, it's definitely meant for those wanting to diversify their palates. 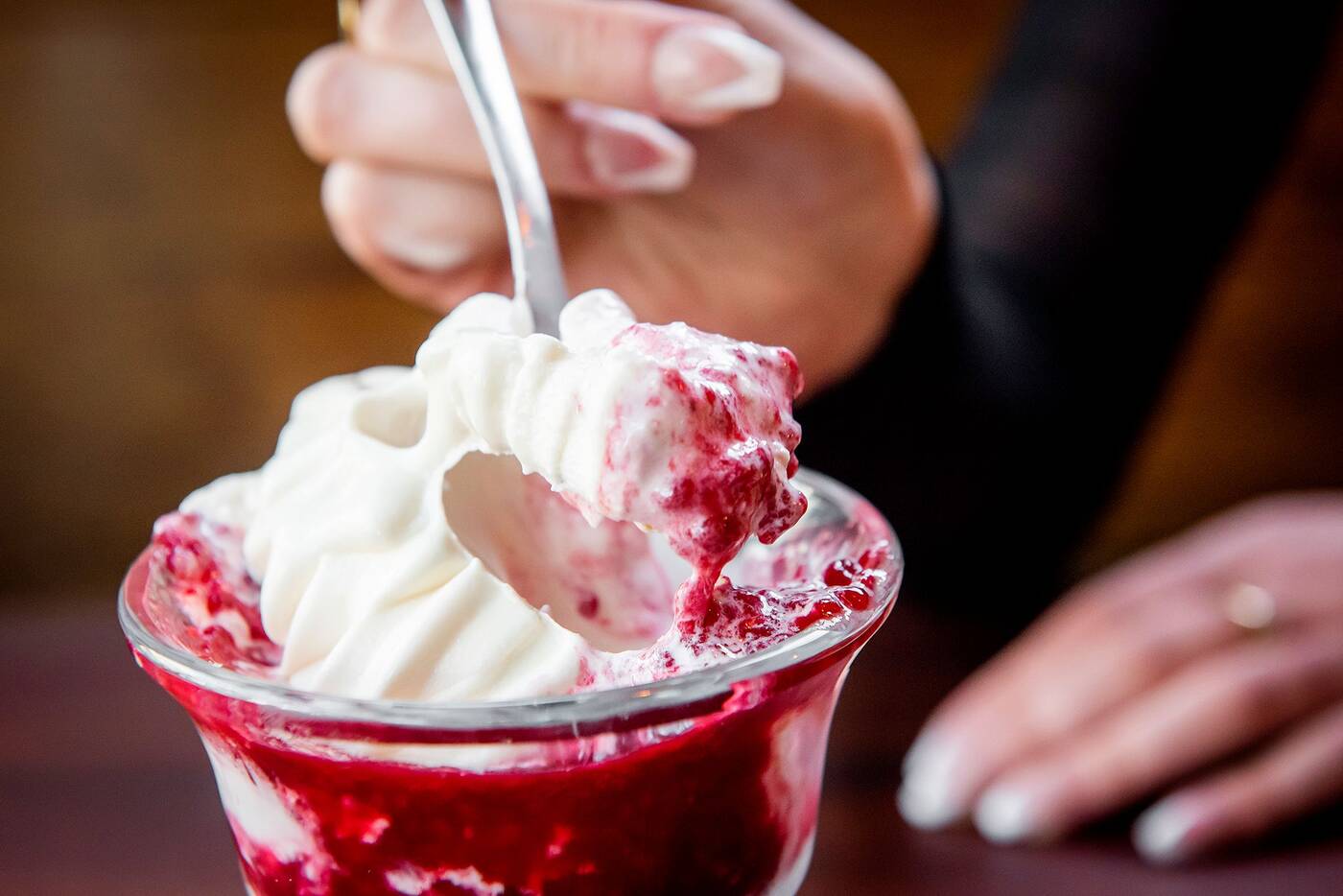 For a pizza joint, Beast does dessert very well. This Raspberry Cheesecake Sundae ($12.00) is inspired by a recipe belonging to Nathan's grandma.

This dish encompasses the sweetness of a vanilla soft serve, doused in a raspberry compote layered between a stack of graham cracker crumble. 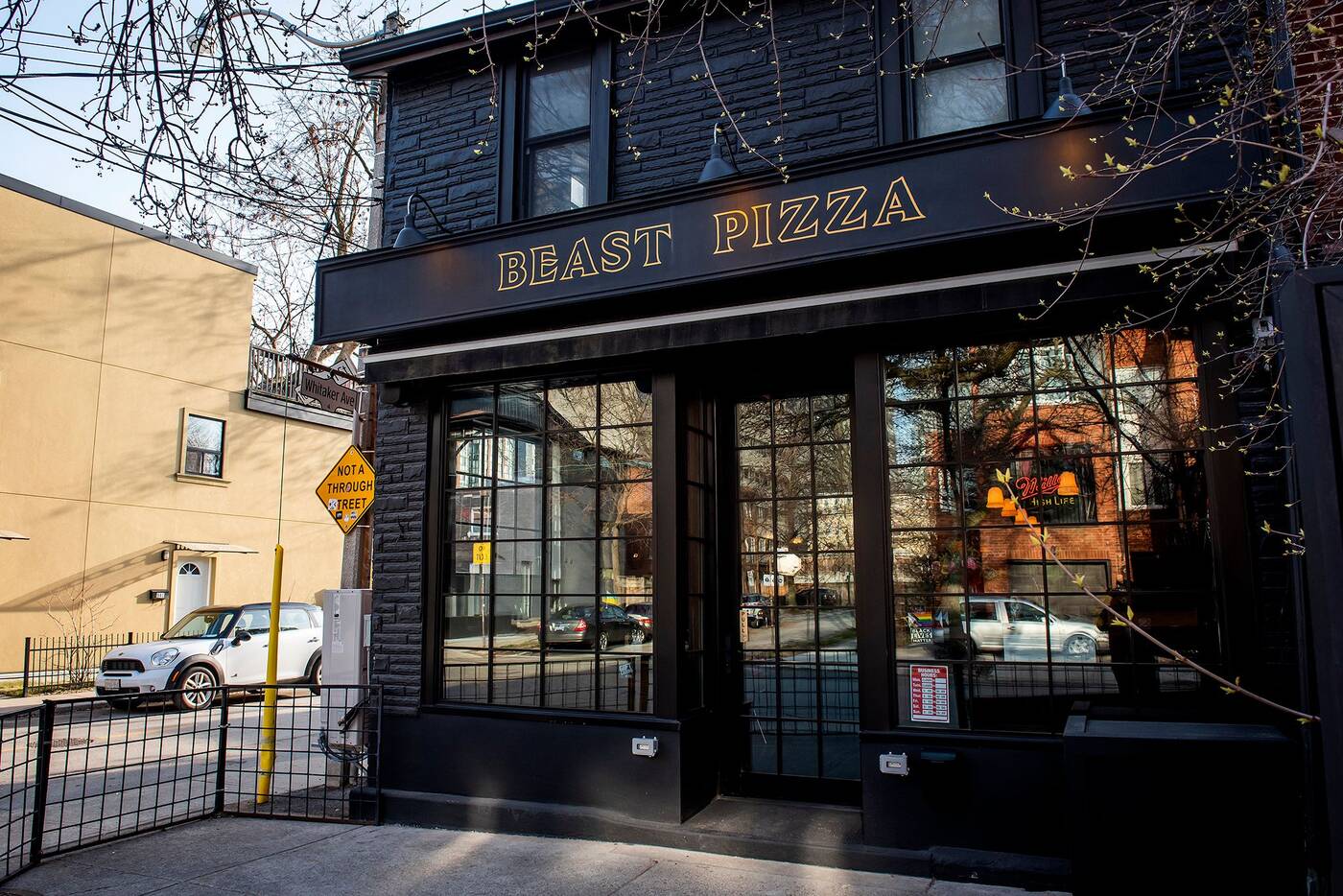 Beast Pizza sports a sleek, black-bricked exterior that takes up a residential corner right off of King Street West and Tecumseth Street.