Aris Place has been grilling souvlaki for the Roncesvalles crowd for over 34 years now -- so you know they've got to be doing something right . I've passed their all day breakfast sign on the street, time and time again, 'til finally this week it won me over and I swung in with a friend to see what old Aris is all about.

We are seated amidst the wooden tables in the main area of the diner (past the bar/souvlaki grill), and are immediately drawn to the beautiful black & white historic photos of the area that grace the walls.

Pulling ourselves away and back to the menu, we marvel at the deals to be had here. A cheeseburger is a mere $3 and the same "Big breakfast" special we'd pay $10 for at Fran's is about $7 here under the "Mega Breakfast" title . As tempting as both were, we decide on the Chicken Souvlaki (on a bun) along with the one piece Fish and Chips dinner. 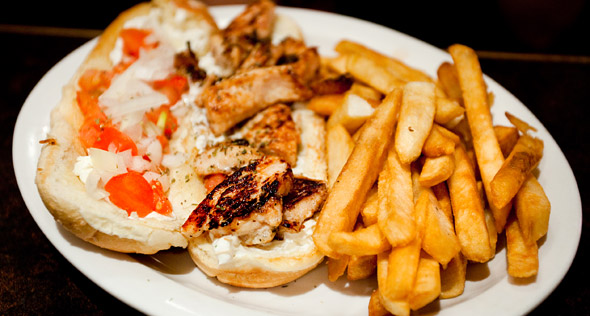 The Souvlaki dishes are available on a pita, bun or as a full dinner. Nothing is going to take you over the $10 range, even the full out large souvlaki dinner.

Our meaty souvlaki on a bun with a side of fries is $6.95. Everything on the plate is pretty good, particularly the chicken: juicy and sizzling off the grill. The hotdog-ish bun is less than thrilling, but we'll take half the blame for flaking out and not going for the authentic pita on this one.

Pictured at the top, the Fish & Chips dinner (1-piece or 3-piece options) comes with potatoes, salad, and a side of garlic bread (not pictured) for $7.25. I ask for fries and gravy instead of potatoes, and it's a no-hassle substitute. Nice.

Despite its tubular shape, the fish is the real deal, chunky and unprocessed. It's also a good sized piece -- I can't imagine how anyone can handle eating the three piece dinner! A packet of Tartar sauce is a nice touch, though you'll probably want to get more than one.

The salad was pretty standard but notably fresh and a nice big portion. The fries were also solid but the gravy-to-fries ratio was a little off. Only the top pieces were hit. Don't be shy with the gravy, Aris!

All in all though, a good meal for the money and the service was so friendly, we'd come back for the coffee alone. Of course, between you and I, I'll most likely be back for the Mega Breakfast -- but you knew that already. 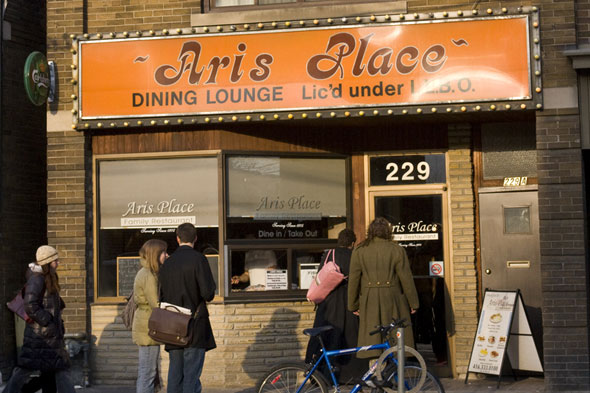