Angelo's serves up coal-fired pizza. It's the first restaurant of its kind in Toronto, but Angelo's actually originates in the Boston area . This is the fledgling chain's second ever location.

Owner Joe Rizzo and Canadian partner Jose Geada have taken over the St. Lawrence Market-area address formerly home to Paganelli's . The eatery will probably attract a lot of foot traffic from tourists, but the place feels more like a suburban neighbourhood joint. 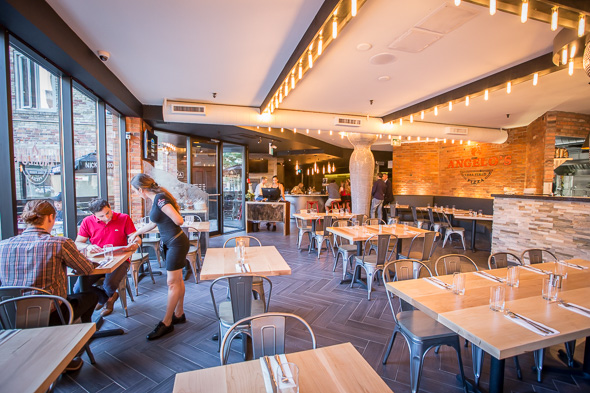 The decor aspires for broad appeal but doesn't convey much personality. It's not that Toronto needs another kitschy Spaghetti Factory , but Angelo's could benefit from a few evocative details, perhaps even a nod to its Boston connection.

The menu triumphs bonafide, unabashed Italian-American classics. Portions are especially generous and many of the dishes are meant to be shared family style. 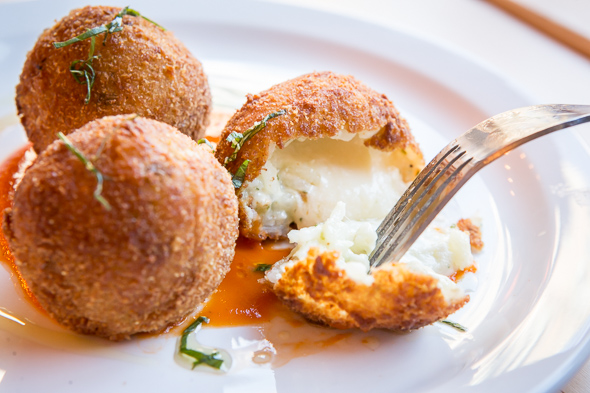 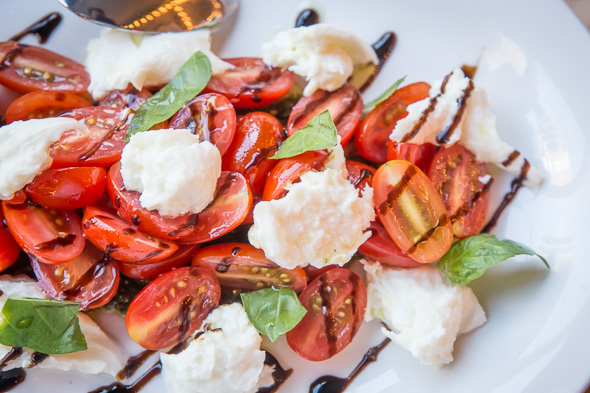 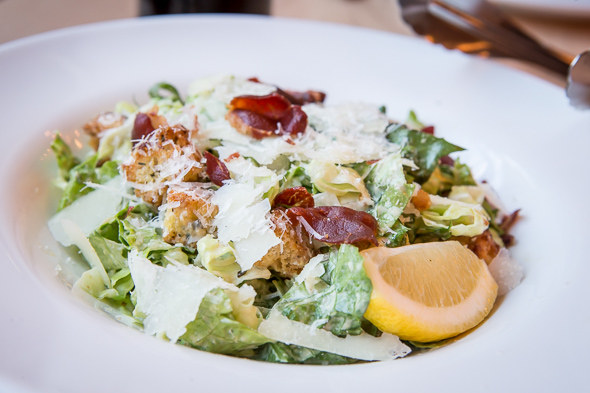 Meanwhile, the Caesar salad ($12) comes with crisp baby romaine, shaved pecorino and crispy prosciutto tossed in a garlicky dressing. It proves to be the only dish of the night that doesn't feel sharable, I'm pretty certain I could tackle this one solo. 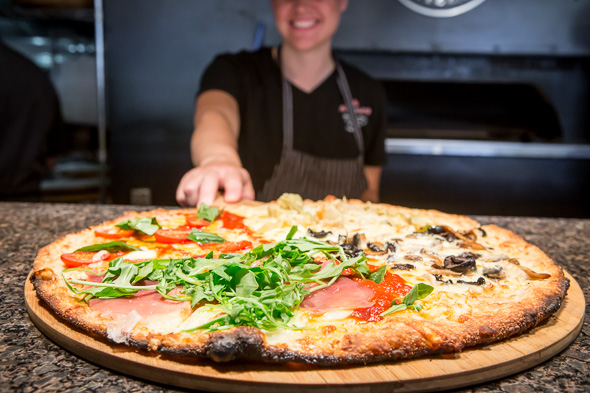 When it comes to the pizza, the style is indeed unique. It's fired in an ultra hot, 32 square foot coal oven and the thin crust is lightly charred on the bottom and the cheese comes almost fused to the dough.

The cornicione is almost non existent, the dough has no rise and boasts a crunchy cracker-like edge that fades into a soft pliable centre. 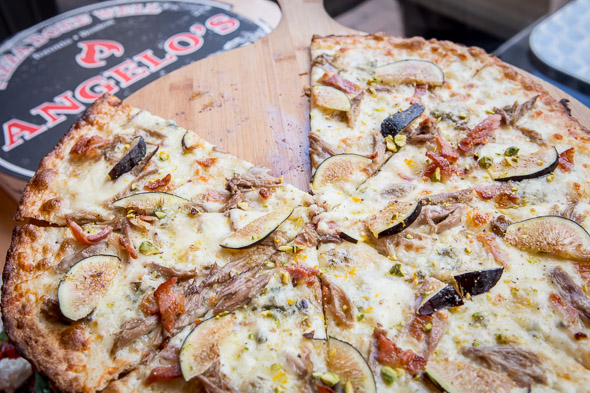 Prices range from $13 for a margherita up to $24 for decadent options like the truffle pizza or the Carole, dressed with gorgonzola, duck confit, pancetta, fresh figs, a sprinkling of crushed pistachios and honey drizzle. 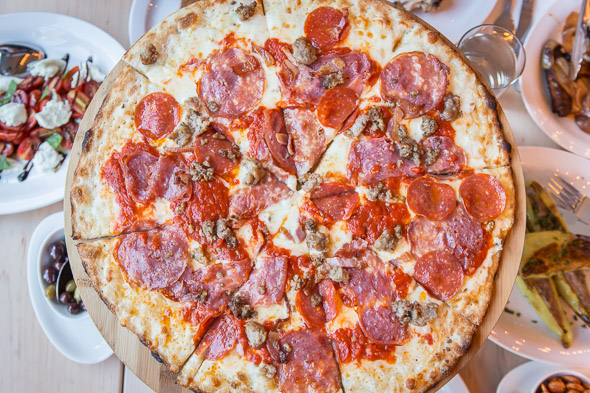 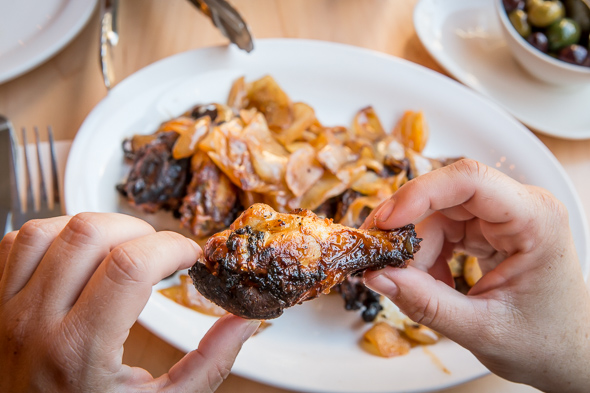 Coal-fired wings ($12) are baked in a skillet and smothered in caramelized onions. They're gently imparted with char-flavoured goodness but are otherwise sauceless. 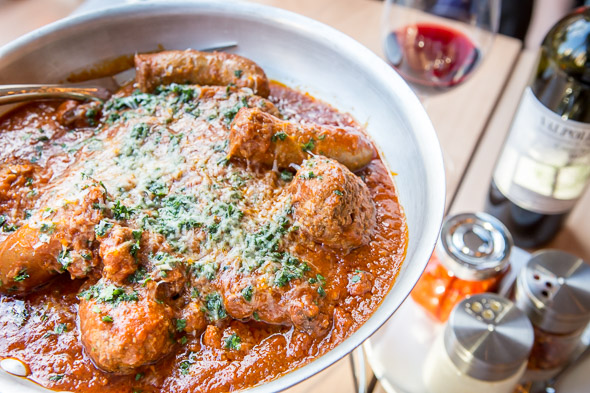 The Sunday gravy ($26) isn't served with pasta; it's literally a giant sauté pan of red sauce loaded with tender pork ribs, sausages and meatballs. You could order a side of pasta, but a basket of house-baked bread ($8) used as scarpetta (a mop for all the sauce) is a delightful hands-on alternative. 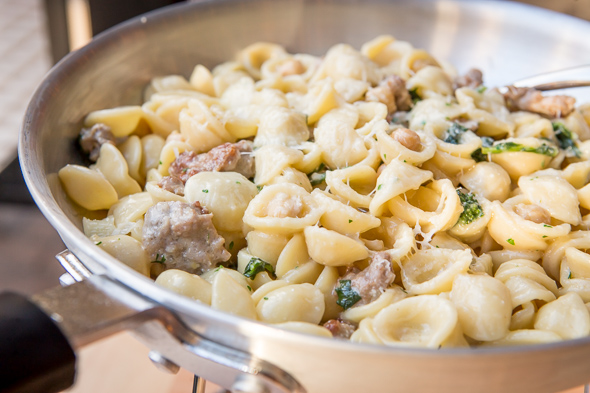 Most of the pastas are made in house, though the orecchiette ($22) is an exception. That's no reason not to try it - store bought or not, it's cooked to a chewy al dente and then tossed with grana padano, rapini, sausage, chickpeas and chilis.

Groups of four or more can take advantage of Nonna's prix fixe family dinner for $48 per person. The multicourse menu includes antipasto, olives and bread, followed by a pizza for the table, a spaghetti platter or the Sunday gravy, salads and desserts. 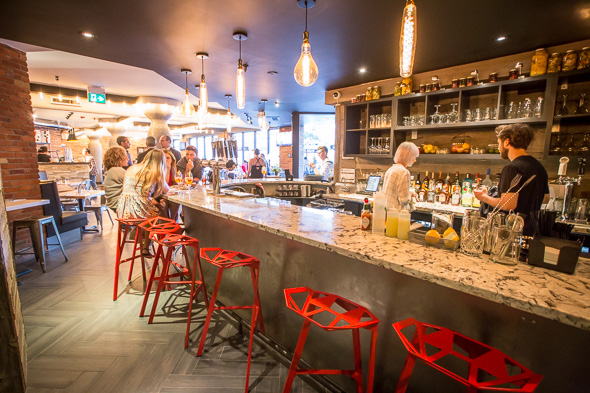 Dessert seems like an impossible ask after the progression of courses I try. Tiramisu, soft cheesecake, Nutella-stuffed bombolone and house made gelato in flavours like salted caramel-pear, milk 'n honey, and grape nut all sound tempting, but I'll have to try them another time... as if I'll be less full next time. Ha. 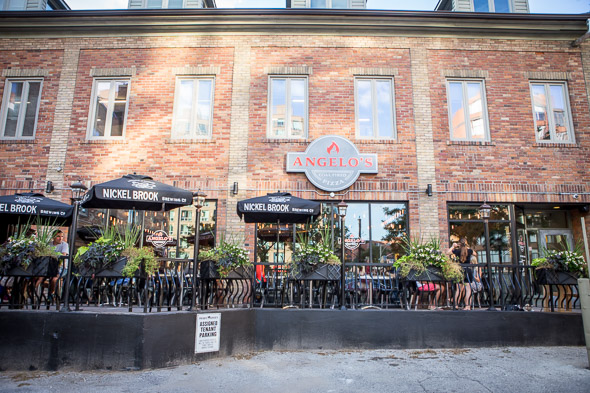