It's been a transformative decade for midtown Toronto's Yonge and Eglinton area. The building boom has added dozens of new towers and thousands of residents to the community, but the area's most significant project yet now looms on the horizon.

Oxford Properties and CT REIT submitted a proposal to the City of Toronto at the tail-end of 2020, seeking to redevelop the 9.2-acre Canada Square property at the southwest corner of Yonge and Eglinton with a five-tower, mixed-use complex. 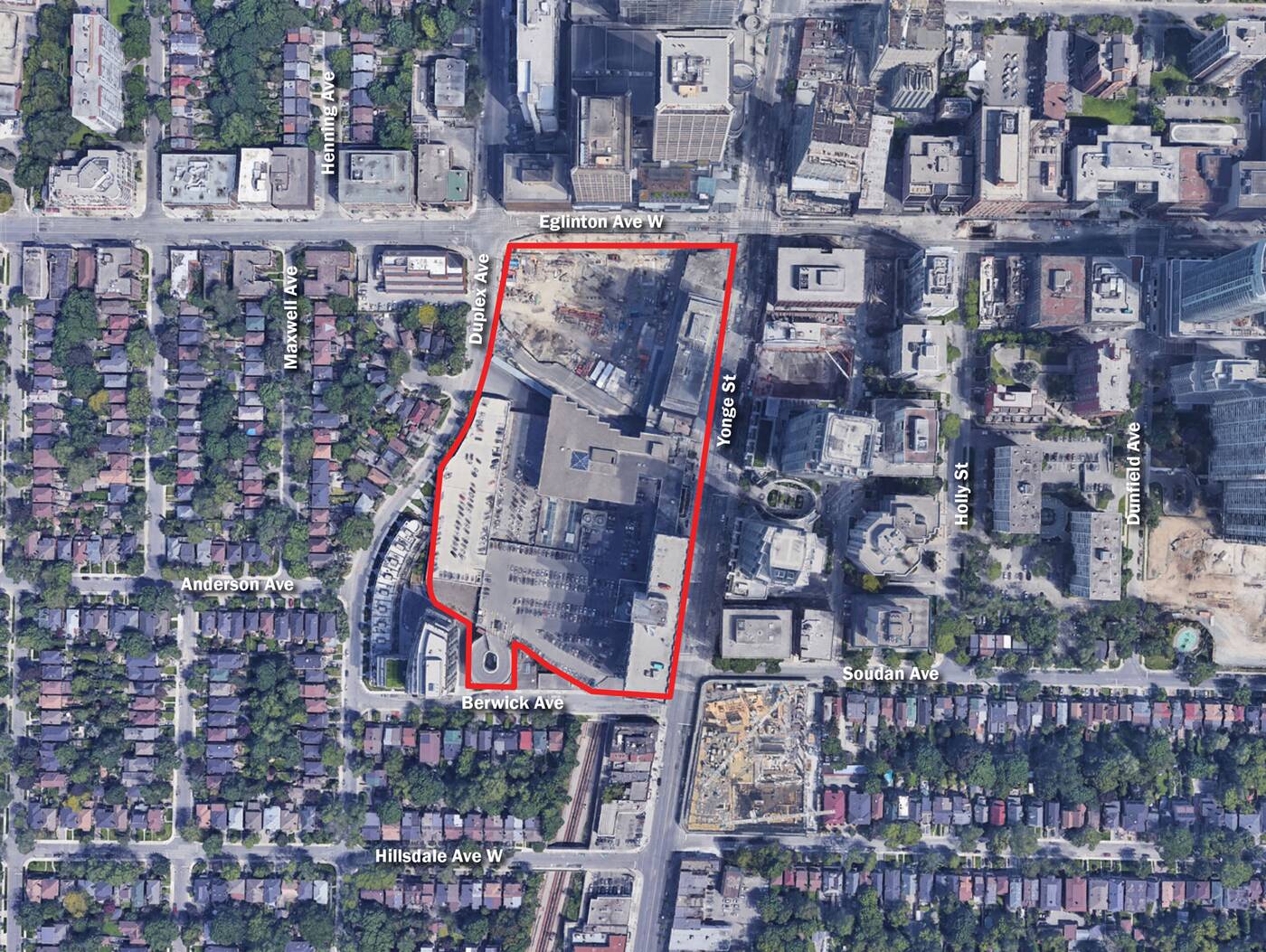 Since submitting this plan, the project team has further engaged with planners, stakeholders, and members of the community, resulting in a refined proposal submitted to the city in the final days of 2022.

There are some substantial changes incorporated in the revised proposal, including the loss of world-renowned firm Pelli Clarke Pelli Architects, with design now tasked primarily to local firm Hariri Pontarini Architects.

One of the biggest changes introduced in the 2022 submission is the retention of the existing office tower at 2200 Yonge Street, half of the complex's pair of Modernist buildings that have graced the Yonge and Eglinton intersection since the mid-20th century.

It was a move decried by a handful of experts, including Globe and Mail architecture critic Alex Bozikovic, who wrote in early 2021 of the project that "A city that grows in increments is always more interesting – and more diverse economically – than a city built from scratch."

And it appears that the development team has taken the criticism to heart in the revised proposal, sparing the existing north tower at 2200 Yonge and integrating it into a new complex of residential and commercial uses. 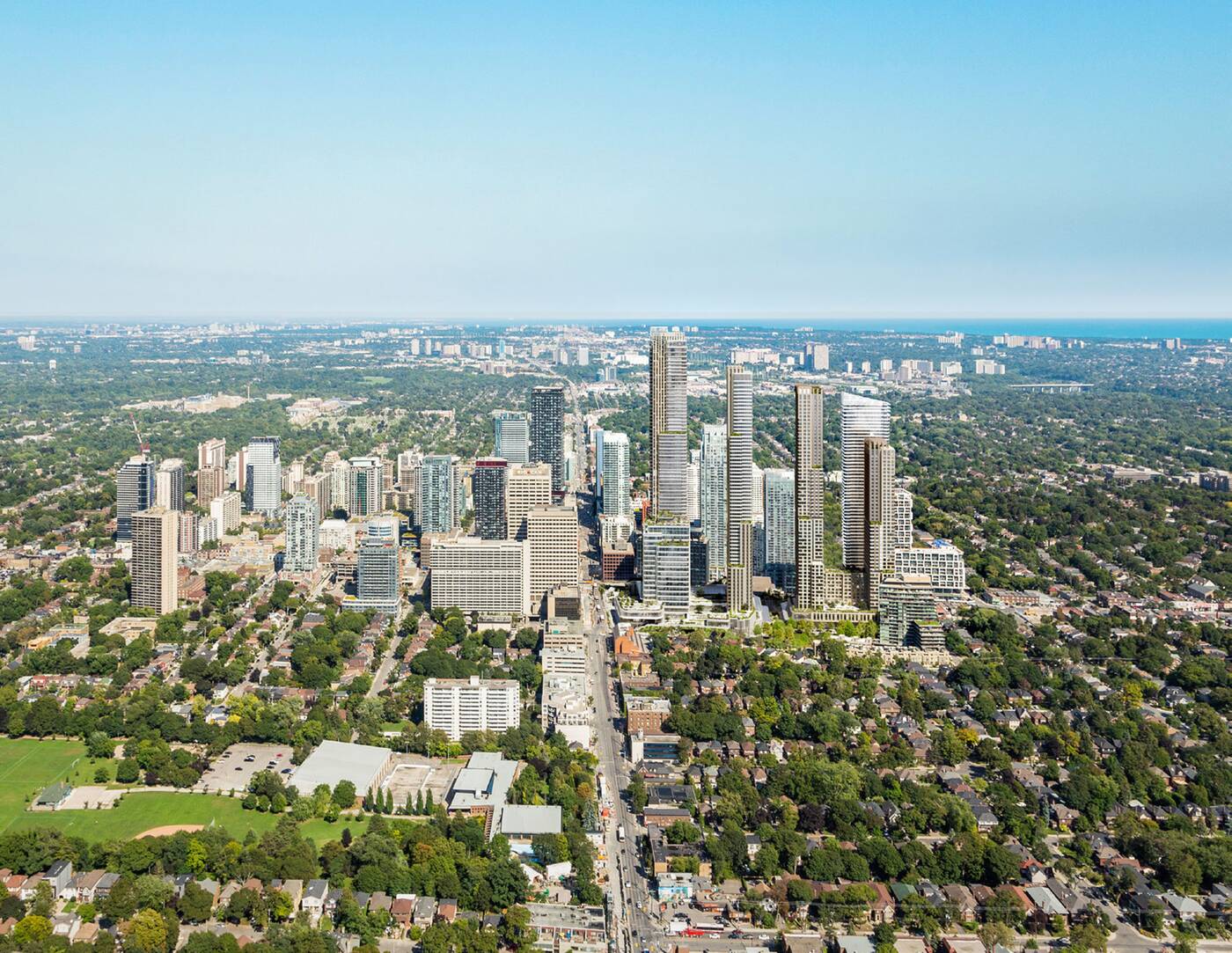 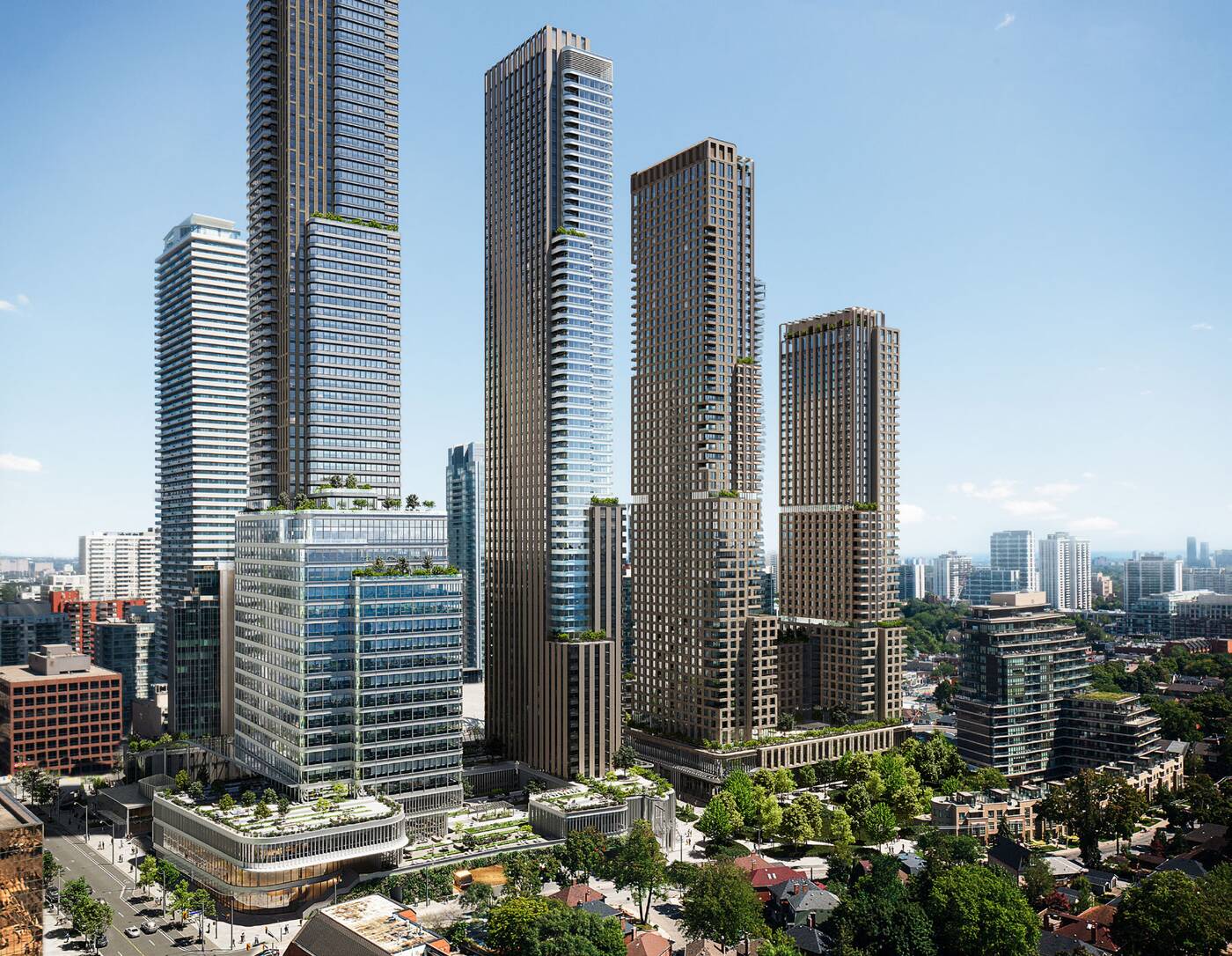 The complex would be constructed in phases, starting with a 65-storey first phase tower rising approximately 247 metres, planned as the tallest kid on the block. The tower's height would be bolstered by the presence of offices on the first 16 floors, which feature much higher ceilings than the residential units above. 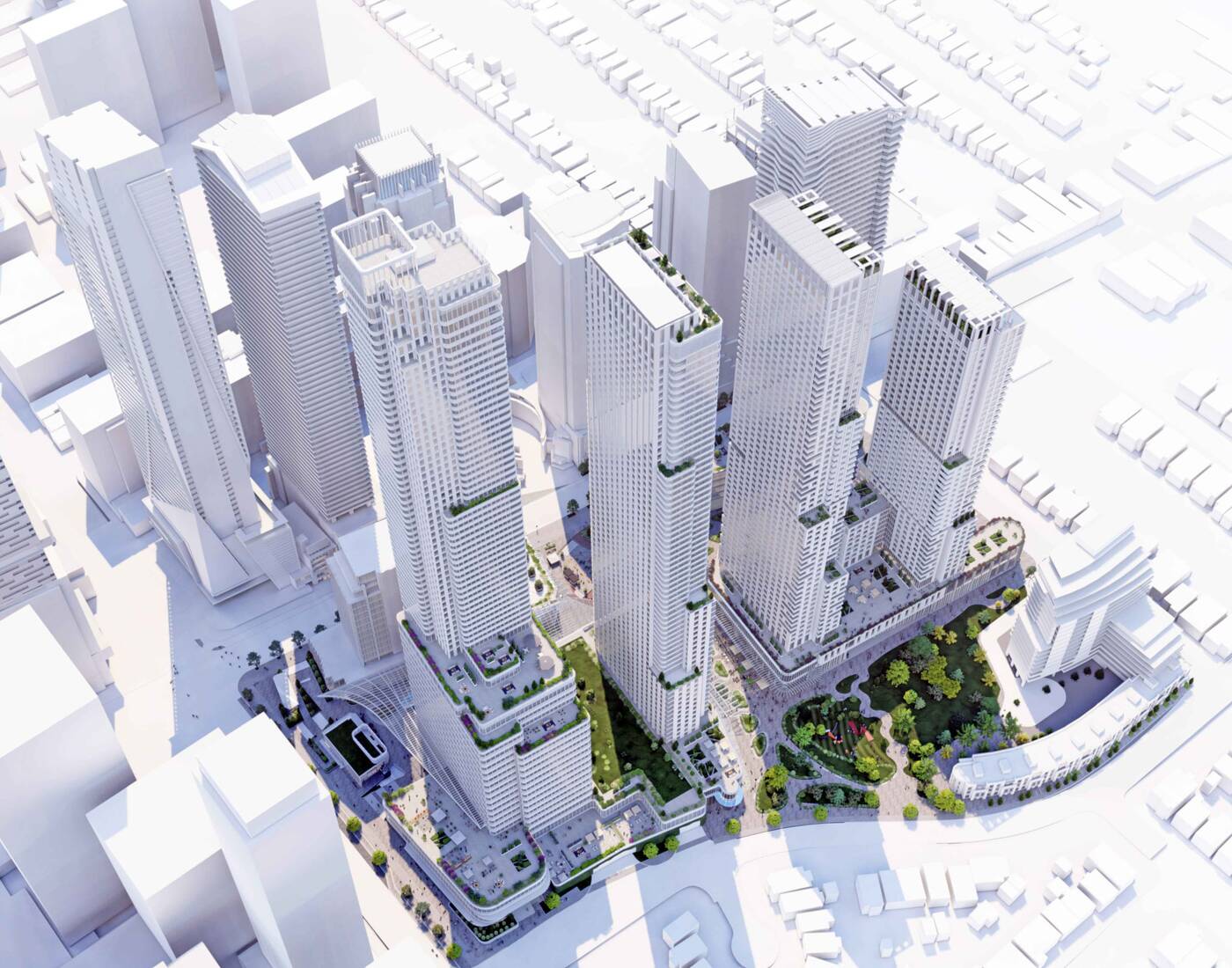 Phase two consists of 65-, 60-, and 45-storey residential towers. Though the floor counts for the phase's taller buildings are similar to the first phase, they would be significantly shorter due to the earlier building's aforementioned office component.

All of this new density would be supported by a large community-use facility, as well as a 4,200-square metre on-site parkland dedication. That equals approximately 1.8 hectares of open space, or nearly half of the entire site footprint. 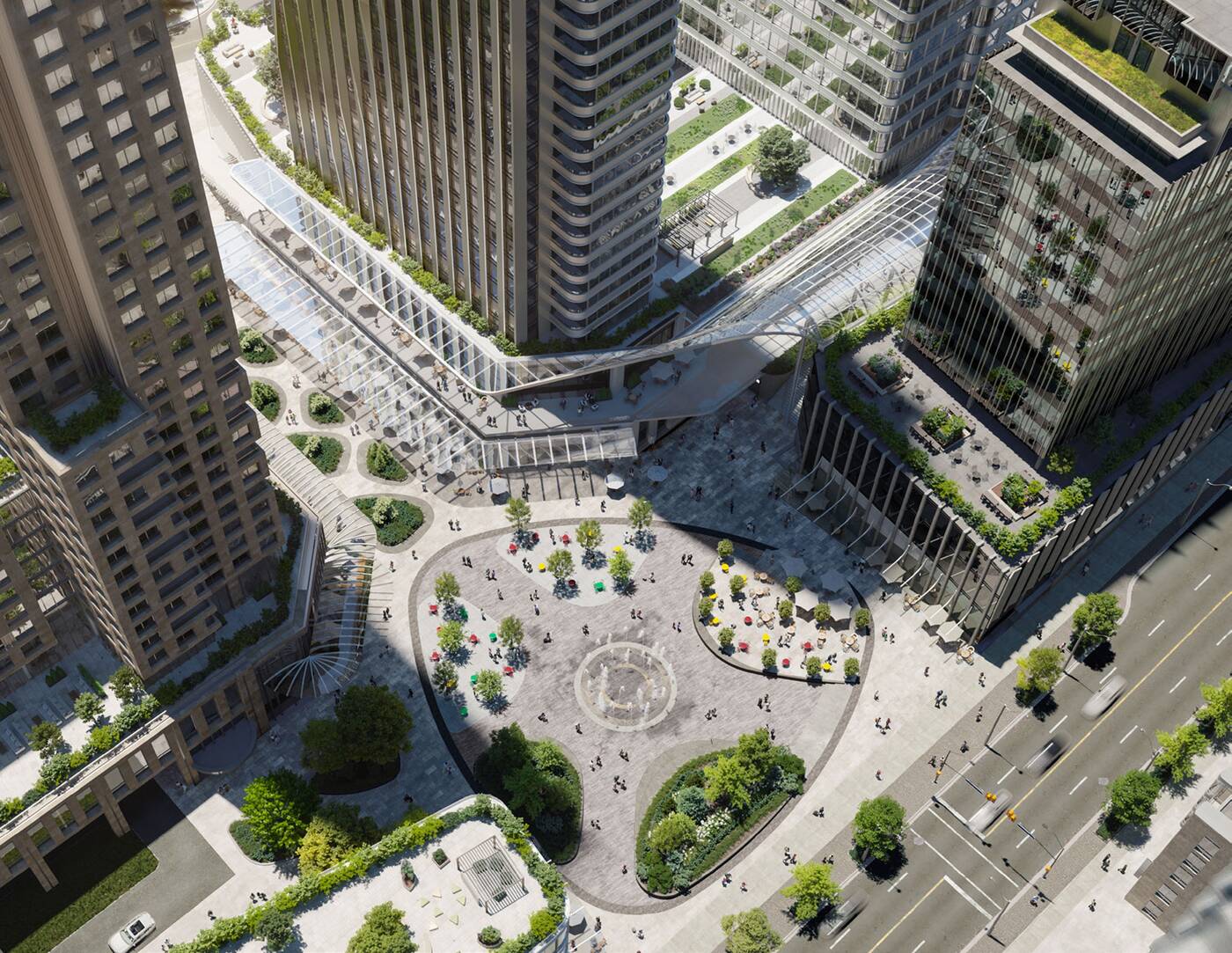 The details of this community-use space are still developing, but feedback was received from locals to incorporate a more significant community or institutional space large enough to accommodate a range of uses, including a new school, recreation facility, community centre, or daycare.

The project team has since held follow-up discussions with both the TDSB and TCDSB.