With the cost of living reaching epic heights this year, Canadians have been seriously altering their spending habits as they struggle to make ends meet amid record-breaking inflation and other factors.

Unfortunately for those under 35, young people are one of the most impacted groups when it comes to dwindling disposable income, and those who were once hopeful about their financial future are feeling notably less so, especially when it comes to certain rites of passage, like eventually buying a home.

While Toronto real estate has long been out of reach for many — surveys have shown that about half of residents have accepted their fate of renting for life — the younger demographics have traditionally shown more optimism in recent years, with most millennials and Gen Zs in the city under the impression that they will one day own a house or condo.

LOL I gave up a loooooong time ago on ever owning a house https://t.co/vZUqDPmUEW

But amid this year's rising inflation, it seems the faith in that potential reality is waning, not only among young people in Canada's largest city, but across the country.

According to a new survey from Royal LePage and Leger, nearly a third of residents aged 18-34 — 29 per cent — have decided to delay or abandon their dream of buying a home here.

This is compared to the 19 per cent of Canadians overall, regardless of age, who have delayed the decision due to higher lending rates and the inflated cost of living. 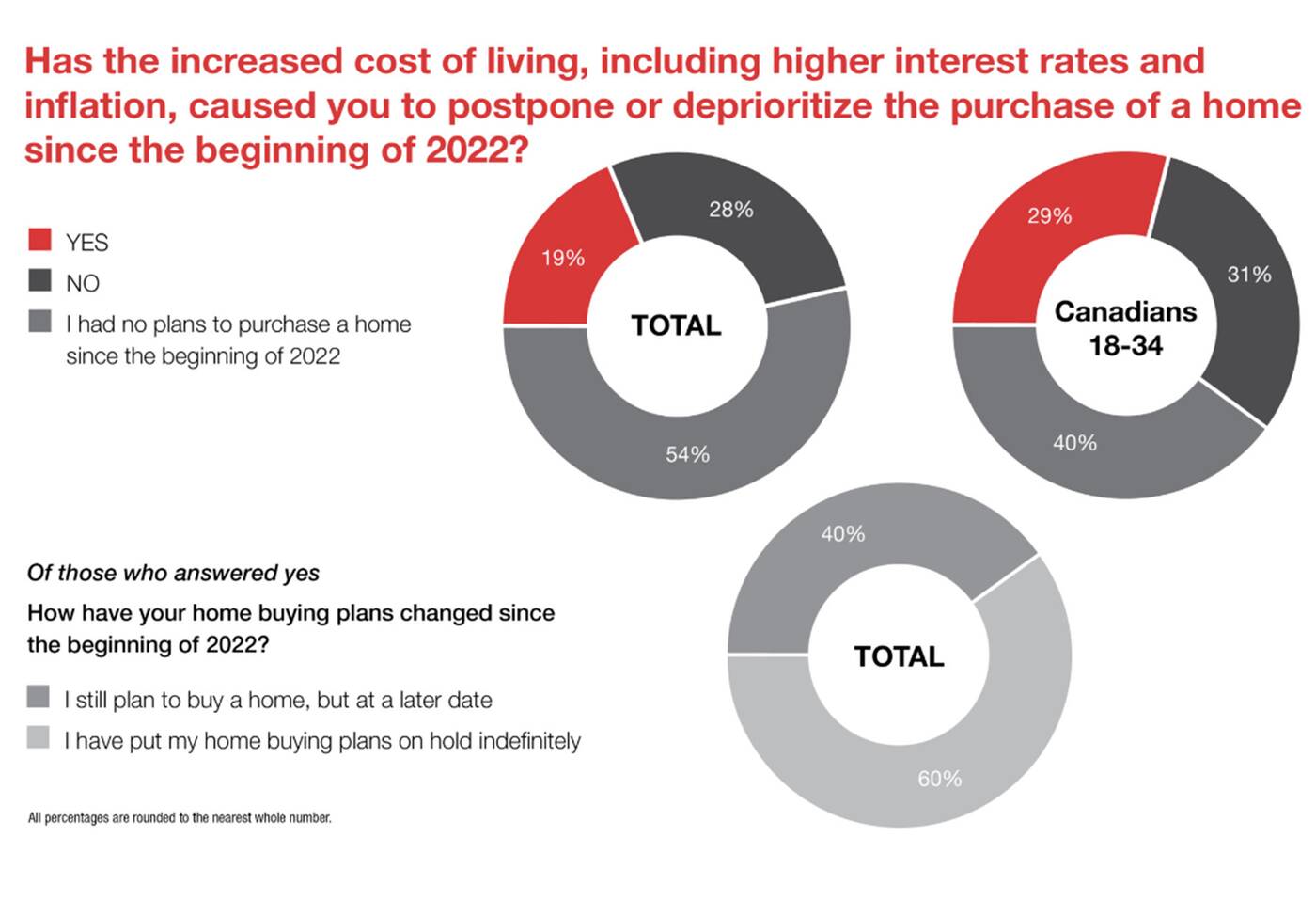 Younger millennials and Gen Zs in Canada are more apprehensive than older age groups about buying a home in this economic landscape, and are putting their plans on hold. Infographic from Royal LePage.

"Respondents between the ages of 18 and 34 were significantly more likely to say they have delayed or postponed a home purchase since the start of the year," the report, published on Monday, reads.

"While monetary policy has had a cooling effect on home prices over the last five months, the cost of consumer goods, including food and fuel, continue to rise. Meanwhile, it has become more challenging to qualify for a mortgage as interest rates go up."

It's become impossible for young people to afford living in cities like Toronto https://t.co/zQHPTB1wpv #Toronto

It also indicates that Canadians' savings are dwindling as they struggle to make ends meet — which is bolstered by new StatCan data showing net savings for all income brackets are down this quarter — making big purchases out of the question.

Many are also stricken by Fear Of Over Paying (FOOP) and are waiting until prices fall more, which they haven't done all that much, considering the fact that there's been a drastic decrease in market activity.

A lot of people waiting to buy.

"A large portion of homebuyers have moved to the sidelines since the cost of borrowing began its rapid increase in March. Everyday expenses have gone up, and compared to periods of pandemic lockdown, Canadians are saving less and spending more," the experts continue.

But, they do expect that a large chunk of would-be Canadian homeowners will be back to their search once interest rates start dropping, especially in Toronto and Vancouver, our priciest markets.