Toronto's topsy-turvy rental market is looking a whole lot more like its old self (before you know what changed everything) these days... which is not to say that prices are stabilizing. Not by a long shot.

Similar to the unprecedented month-over-month declines we witnessed back in late 2020 and 2021, average rents are now rapidly rising as people rush back to cities for work, school and (presumably) a less boring existence now that lockdowns appear to be over for good.

"The July average rent in Canada is now only $20 below the pre-pandemic peak of $1,954 in September 2019," reads the latest National Rent Report from rentals.ca and Bullpen Research & Consulting.

This represents a national month-over-month price gain of 2.6 per cent and an average increase of 10.4 per cent since last July, according to the report.

The trend is far more pronounced, however, in regions like Toronto, where the average rent for all property types rose a staggering 24 per cent between July of 2021 and 2022 to reach $2,691. 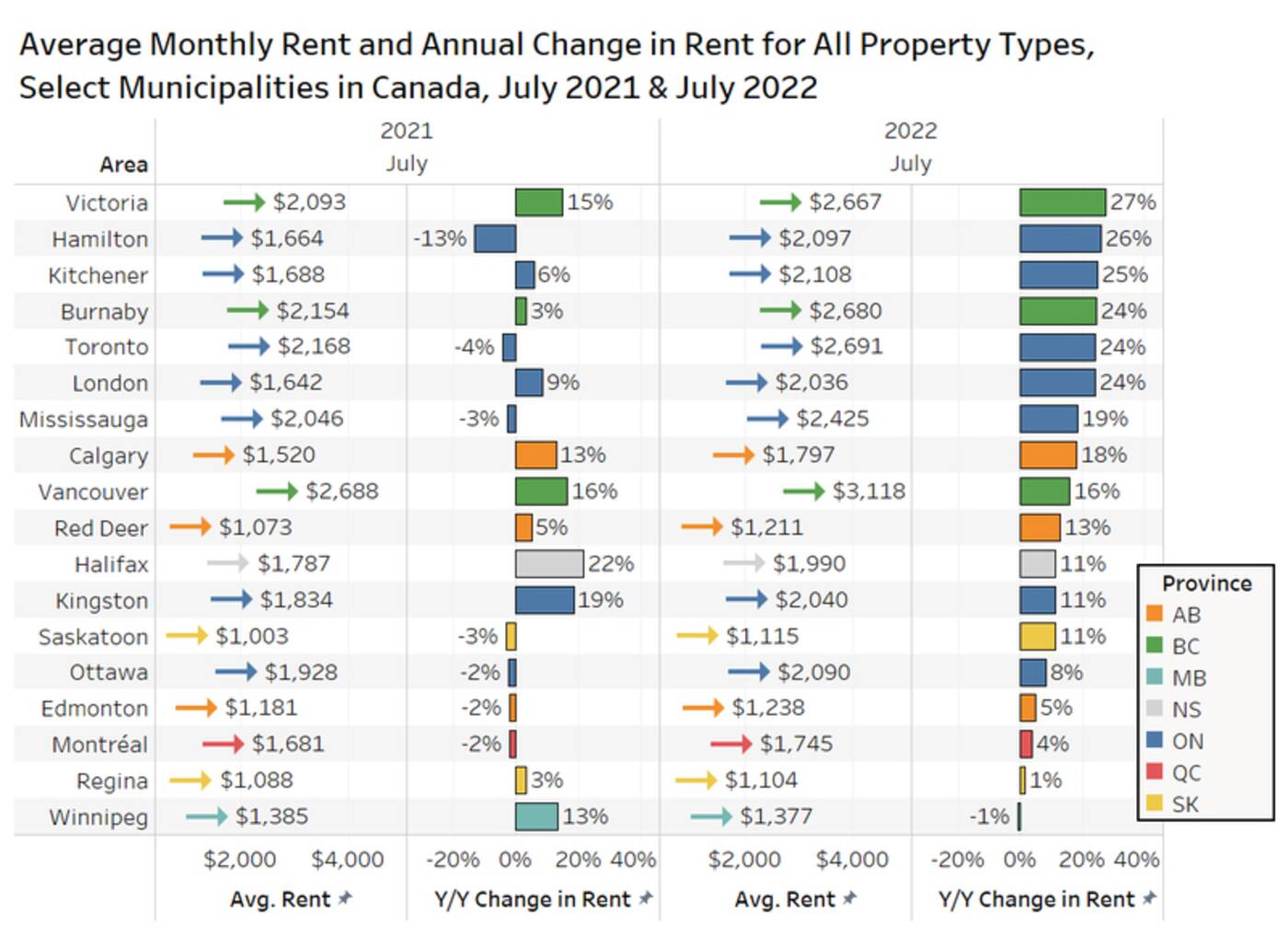 Broken down by rental category, one can observe an uptick in demand for larger urban units, specifically.

The average one-bedroom rental unit cost $2,257 per month in Canada's largest city as of July 2022, while the average monthly rent price for a two-bedroom clocked in at $3,259.

"Workers returning to the office are boosting rents in the most expensive central markets in Canada," say report authors Matt Danison and Ben Myers.

An obvious reason for this about-face would be the reversal of the "mass urban exodus" that caused Toronto rent prices to fall in the first place back when the pandemic hit.

People are returning to the city from larger, cheaper rural properties, no doubt, but the shift can also be blamed in part on rising interest rates and falling house prices, both of which are thought to have spooked many potential homebuyers.

Between fears of not being able to keep up with mortgage payments and losing money on their investments, experts say prospective owners may be more comfortable renting for the time being.

Here are the cities near Toronto where it's smarter to buy than rent a home right now https://t.co/sgUEHD0NPJ #Ontario #RealEstate

While Toronto prices are indeed rising faster than the national average, some cities are faring even worse, particularly out west.

Toronto posted only the fourth-highest growth rate of 35 major cities analyzed last month; Victoria, B.C., topped the list with annual rent growth of 27 per cent; followed by Hamilton (26 per cent); and Kitchener (25 per cent).

Despite this, Toronto remains the second-most expensive rental market in Canada, beaten out only by Vancouver, which posted an annual growth rate of 16 per cent last month to reach a new average rent price (for all property types) of $3,118.