Given how ridiculously unreasonable Toronto real estate prices are known to be, it may be understandably hard to believe the recent chatter about the market potentially cooling off, but the latest numbers indicate that the trend is indeed going that way.

According to the newly-released report from the Toronto Regional Real Estate Board (TRREB), May was a year of big market changes in the GTA, largely in a continued, escalating response to higher mortgage interest rates.

Experts have been predicting a slowdown this year from the ridiculous highs that saw the average home in the GTA hit over $1.3 million and the typical detached house in Toronto proper rise to over $2 million.

And, recent months have seen a huge decrease in market activity, with sales numbers falling so much (even if prices were not) that we reached the cusp of a buyer's market.

While the region may be the most overvalued for housing in Canada — 74 per cent overvalued in some cities — prices are indeed on the decline as fewer and fewer people are buying and hope to own wanes.

The number of home sales was down a shocking 38.8 per cent last month compared to the same time last year, and nine per cent from the month prior, even though listing numbers remained high — active listings were up 26 per cent from May 2021.

Though the average price for the month was 9.4 per cent higher than last May, hitting $1,212,806 for the region, prices and the MLS Home Price Index Composite Benchmark did indeed fall month-over-month, reversing a long-running trend.

When compared to February's peak, this marks a drop of a staggering $121,000, which has happened slowly over the last three months. 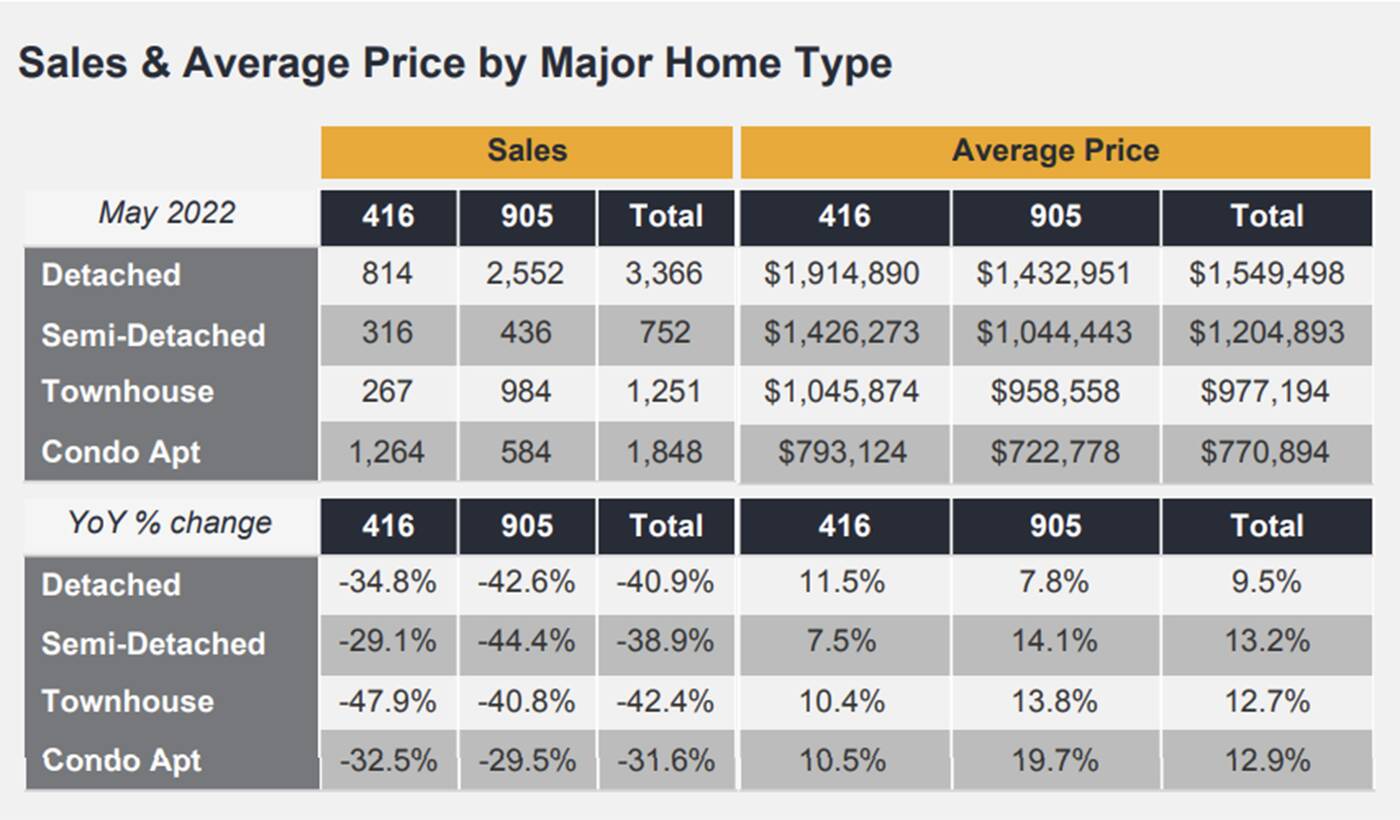 The latest stats for different housing types in different parts of the GTA, from TRREB's May 2022 March Watch report.

The board says this is in line with their forecast for a cooler 2022 with a very different market dynamic than the city has seen ever since it started heating up hard after a brief pandemic low at the end of 2020.

"GTA housing market conditions continued to evolve in response to higher borrowing costs. Similar to April results, May 2022 sales were down on a monthly and annual basis. Conversely, active listings at the end of May were up on a month-over-month and year-over-year basis," the TRREB experts wrote Friday morning.

"More balanced market conditions have provided buyers with more negotiating power. As a result, while benchmark and average home prices were up substantially compared to last year, selling prices trended lower on a month-over-month basis."

Though residents will still need to be pulling in $150k or so per year to afford a condo in the city and around $230k to afford a single-family home, things are looking a little less bleak, with further declines to come.

Meanwhile, the rental market is doing the complete opposite, with prices now at more than $2,300 monthly, on average.