An application submitted with city planners in mid-November could bring about the end of The Irish Embassy Pub & Grill in the heart of downtown Toronto, and of course, more condos are part of the ask.

At first, the application came with scant details hinting at the impending closure of the popular pub. This has now been confirmed as documents made public on Wednesday are providing a detailed look at the ultra-slender condo tower that would sprout above the northeast corner of Yonge and Wellington. 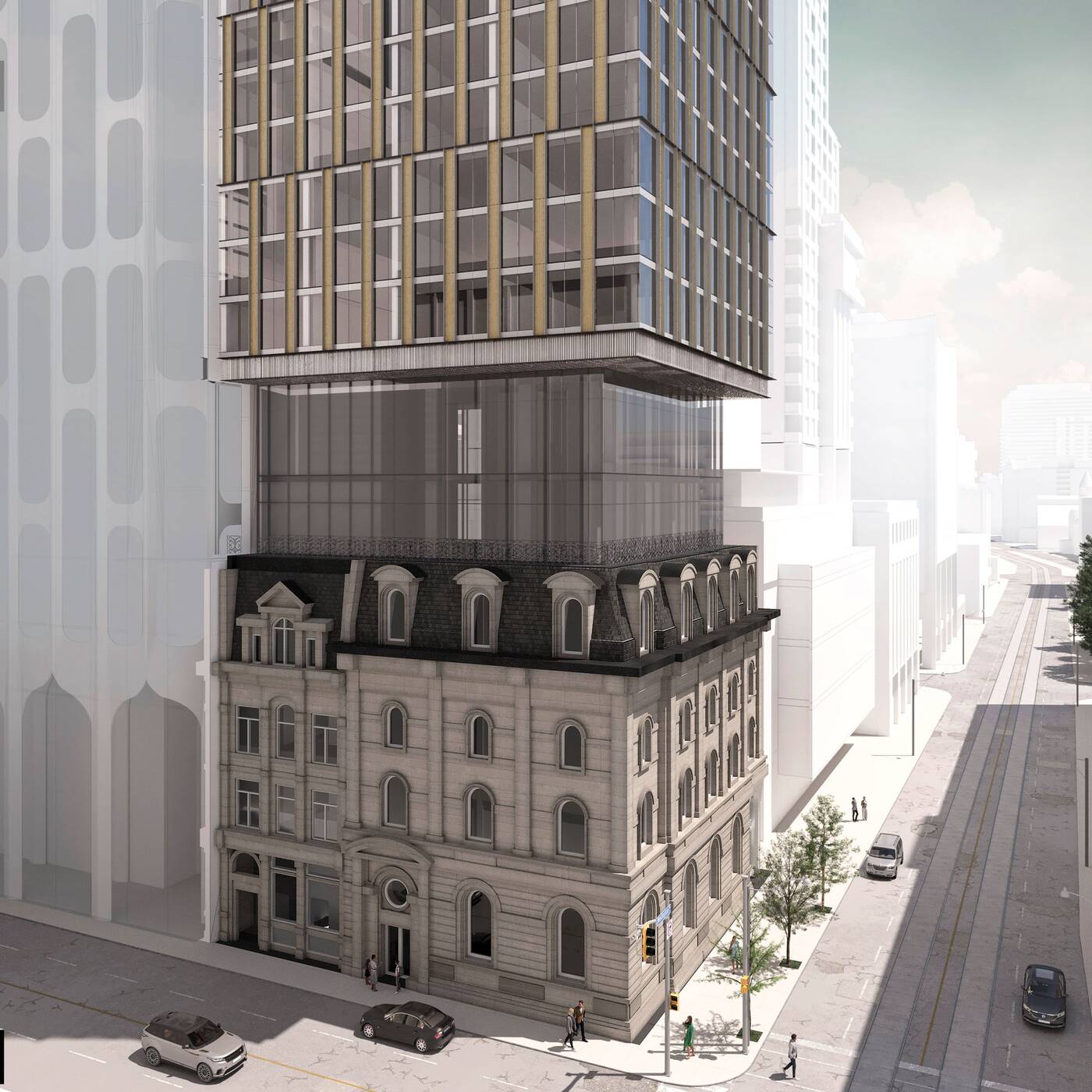 Looking northeast over the tower base, which includes retained heritage facades at 49 and 51 Yonge Street. Rendering by architects—Alliance.

Developer SmartCentre REIT's redevelopment plans call for a 60-storey mixed-use tower at 49 Yonge Street, rising to a height of just over 216 metres.

If completed today, the architects—Alliance-designed building would stand as Toronto's 15th-tallest, and a good deal taller than nearby skyscrapers Bay Wellington Tower and 88 Scott Street.

And while the neighbourhood skyline would look quite a bit different if the tower is granted approval, the plan aims to keep the pedestrian level experience feeling pretty familiar, restoring and preserving the exteriors of the existing heritage buildings into its base. 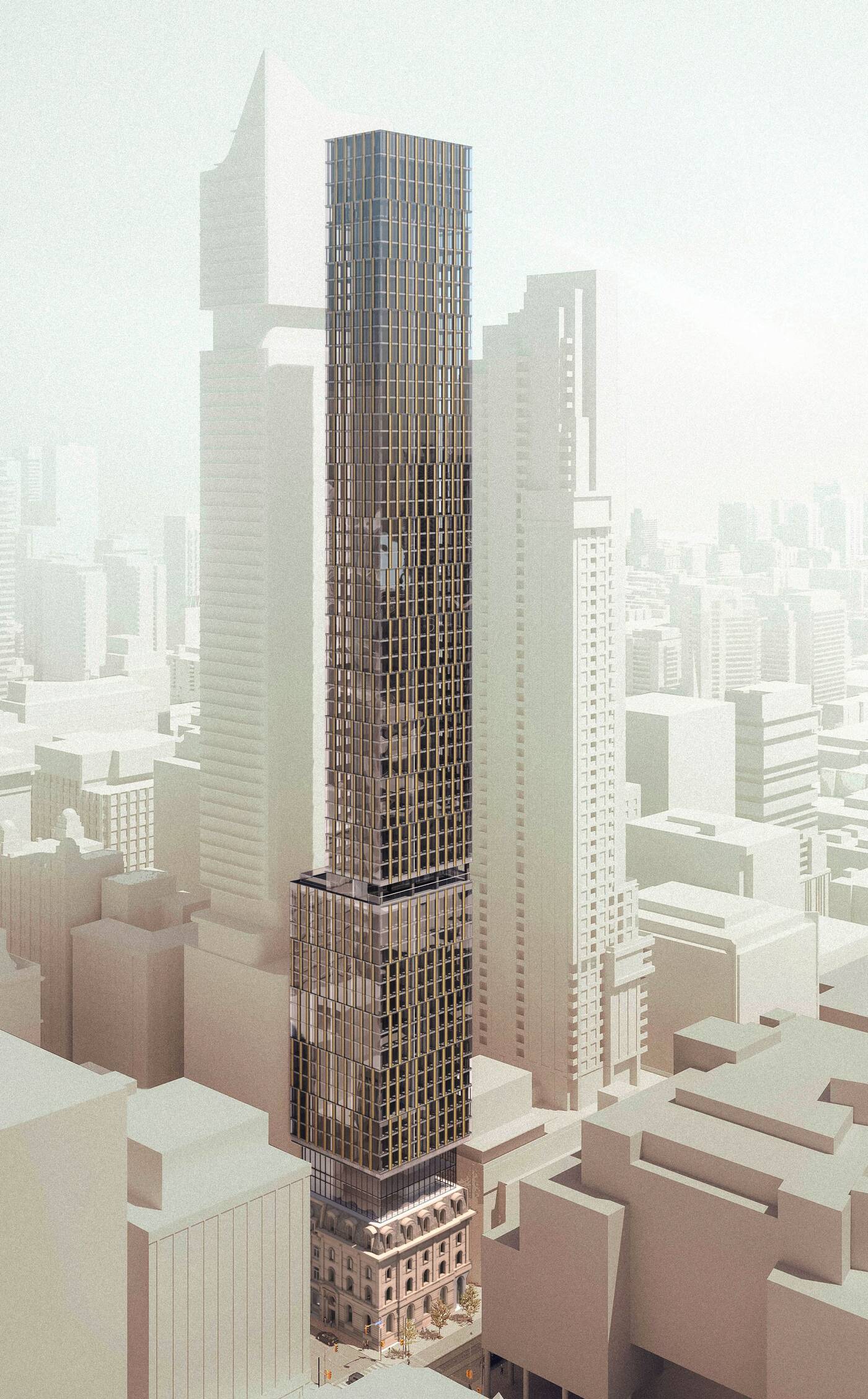 Looking northeast to the proposed 60-storey tower at 49 Yonge Street. Rendering by architects—Alliance.

The 1872 former Bank of British North America building at 49 Yonge Street is a designated heritage building, while the 1847-built Commercial Travellers Association Building at 51 Yonge is listed on the city's heritage register.

Both would have their exterior walls retained and incorporated into the tower's podium, with some minor alterations. 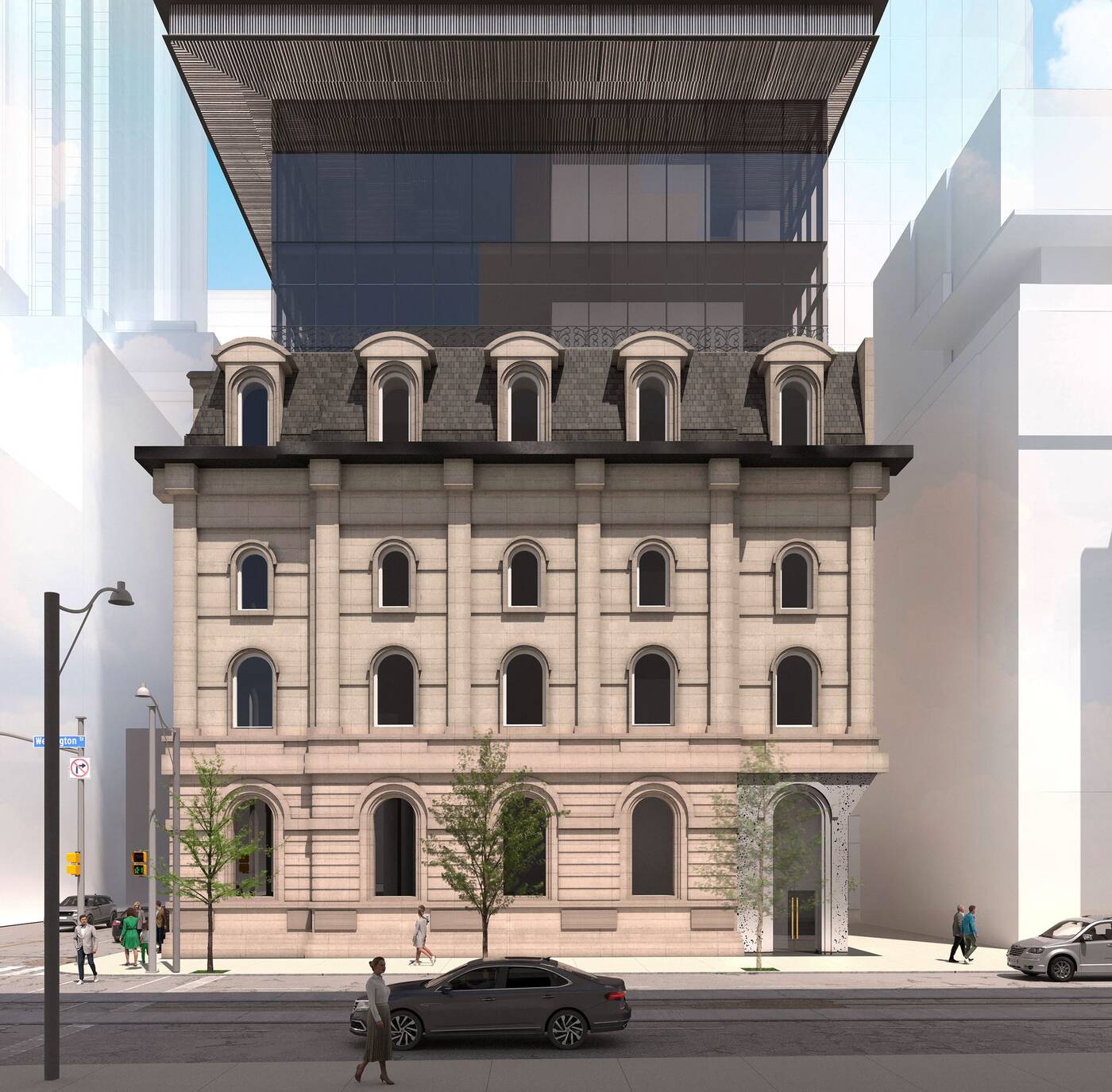 Facing north across Wellington Street East towards the heritage base, showing proposed minor alterations along the easternmost street-level bay. Rendering by architects—Alliance.

Demolition of the buildings' ornate interiors would be necessary to make way for the new tower's foundations and base, though a heritage report submitted with the plans indicates that salvage and reinstatement of interior details are being considered along with the less promising option of replication.

Amenities on levels six, 21, and 22 would give all residents a piece of the sky to enjoy, though some of the views will be pretty intimate, the site partially hemmed in by an existing and another proposed tower.

Starting above the uppermost amenity floor, the tower gets super slender, the floorplate size trimmed down to a minuscule 348 square metres from the 22nd through 60th floors.

This design feature helps to maximize the separation distance between the proposal and the current and future towers on abutting sites.

While 284 bicycle parking spaces are proposed within two underground levels, the proposal is a bit of an oddity, lacking vehicle parking entirely. Though this is likely to become common in downtown locations in proximity to transit thanks to the city's plan to loosen mandatory minimum parking requirements.