With Halloween just around the corner, an interesting real estate opportunity has emerged for morbidly-minded investors just a few hours northwest of Toronto.

The old Owen Sound Court House & Jail is massive, beautiful, and rich with history dating all the way back to its construction in 1854 — and yet, this unique property just hit the market for a measly $229,000. 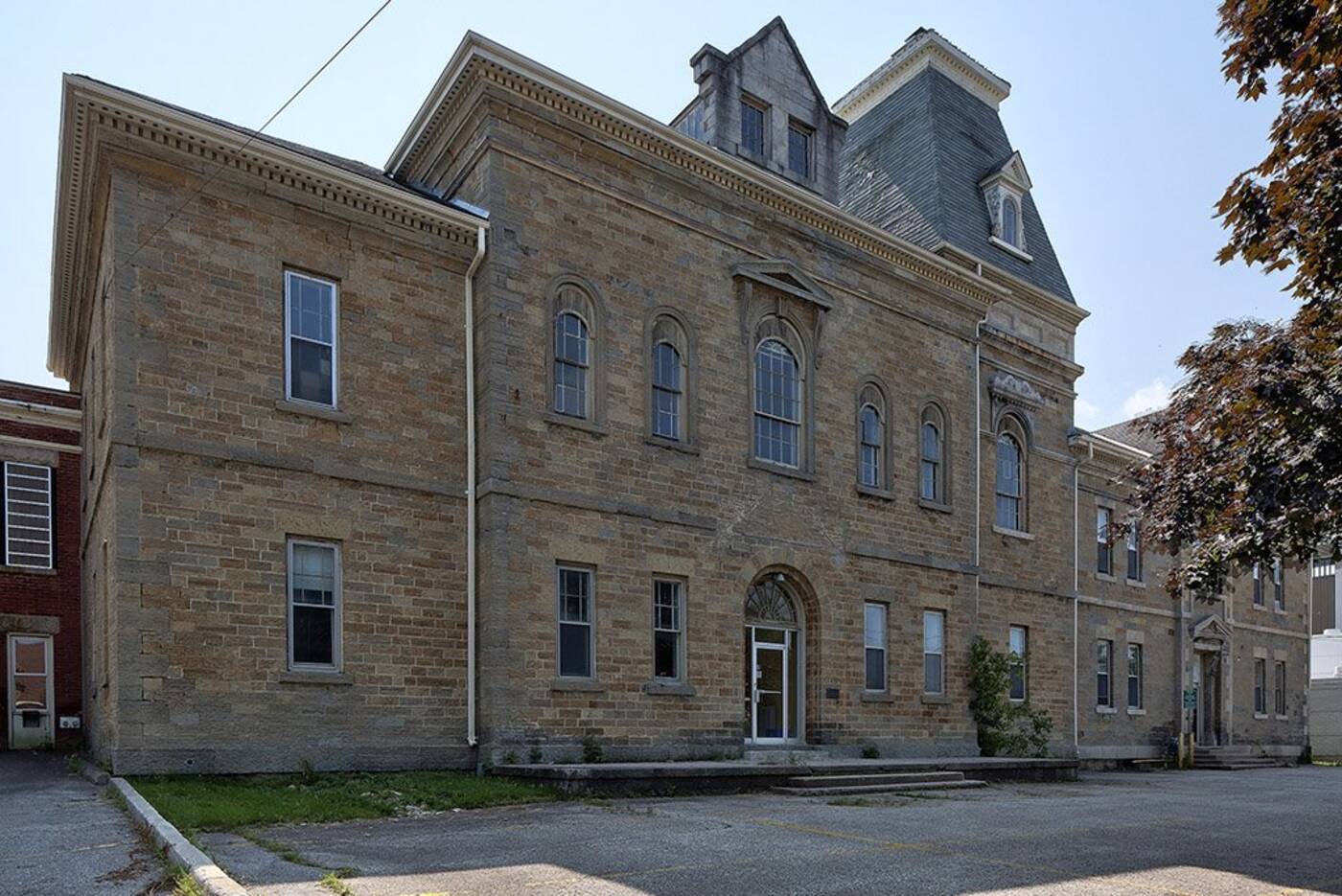 This beautiful brick building might be the least-expensive of its kind on the market right now. Image via Chestnut Park Real Estate Limited.

So what's the catch? It's simple: Whoever is chosen to purchase this place must first survive a night inside one of its spooky historical jail cells.

The actual catch is that the site itself needs some very expensive and specific work done; you can't just buy the cluster of buildings and move in, or do anything at all that hasn't been approved by stakeholders including City of Owen Sound and multiple heritage preservation boards. 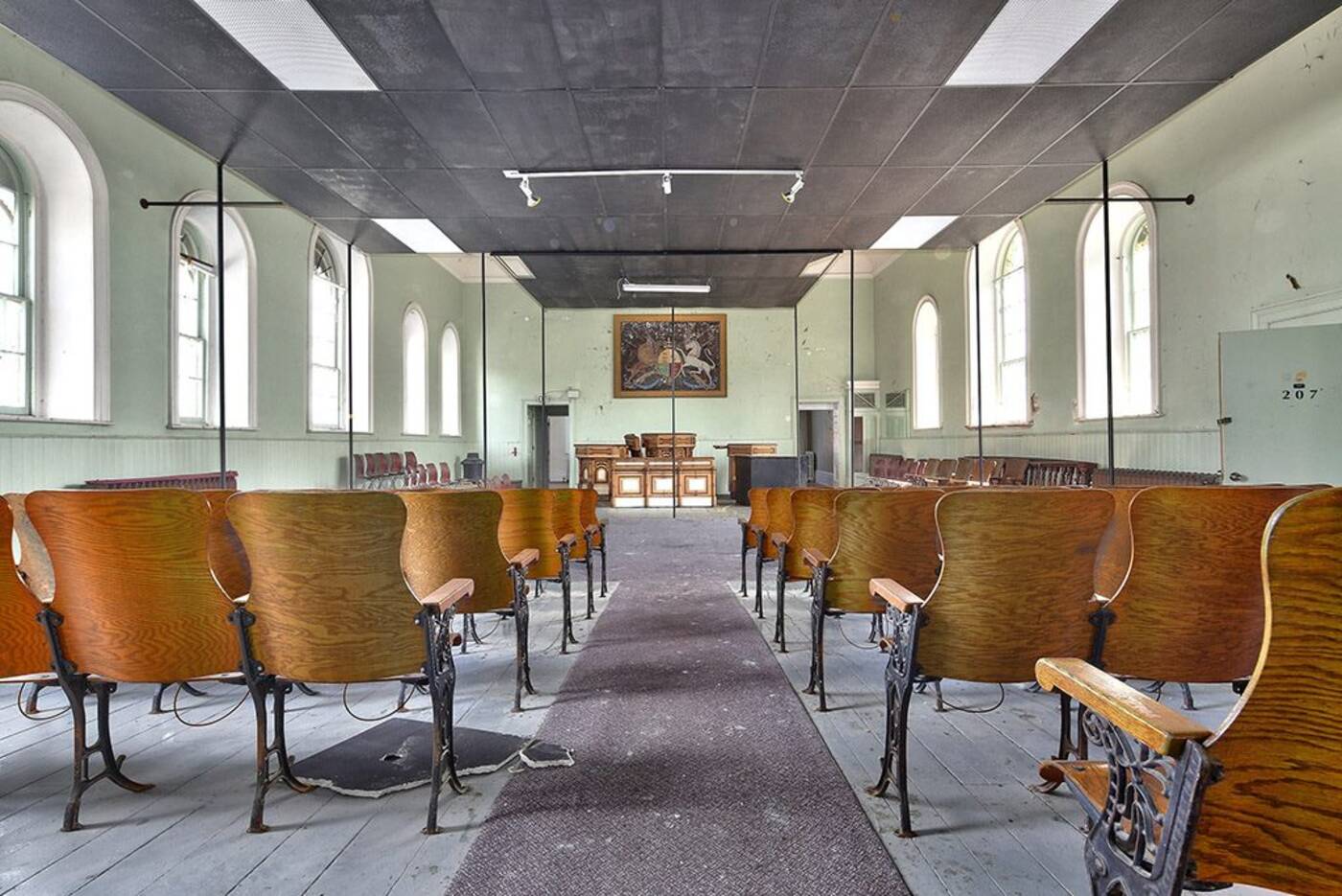 The historic courhouse buildikng was constructed in 1854 for the County of Grey government. Image via Chestnut Park Real Estate Limited.

"This property is a redevelopment site and a substantial financial commitment will be required to complete any project," reads a listing for the property.

"Many potential uses exist for the building and the current owner is looking for that special purchaser that can appreciate the provenance of a property of this magnitude. Bring your ideas forward today, many options for redevelopment." 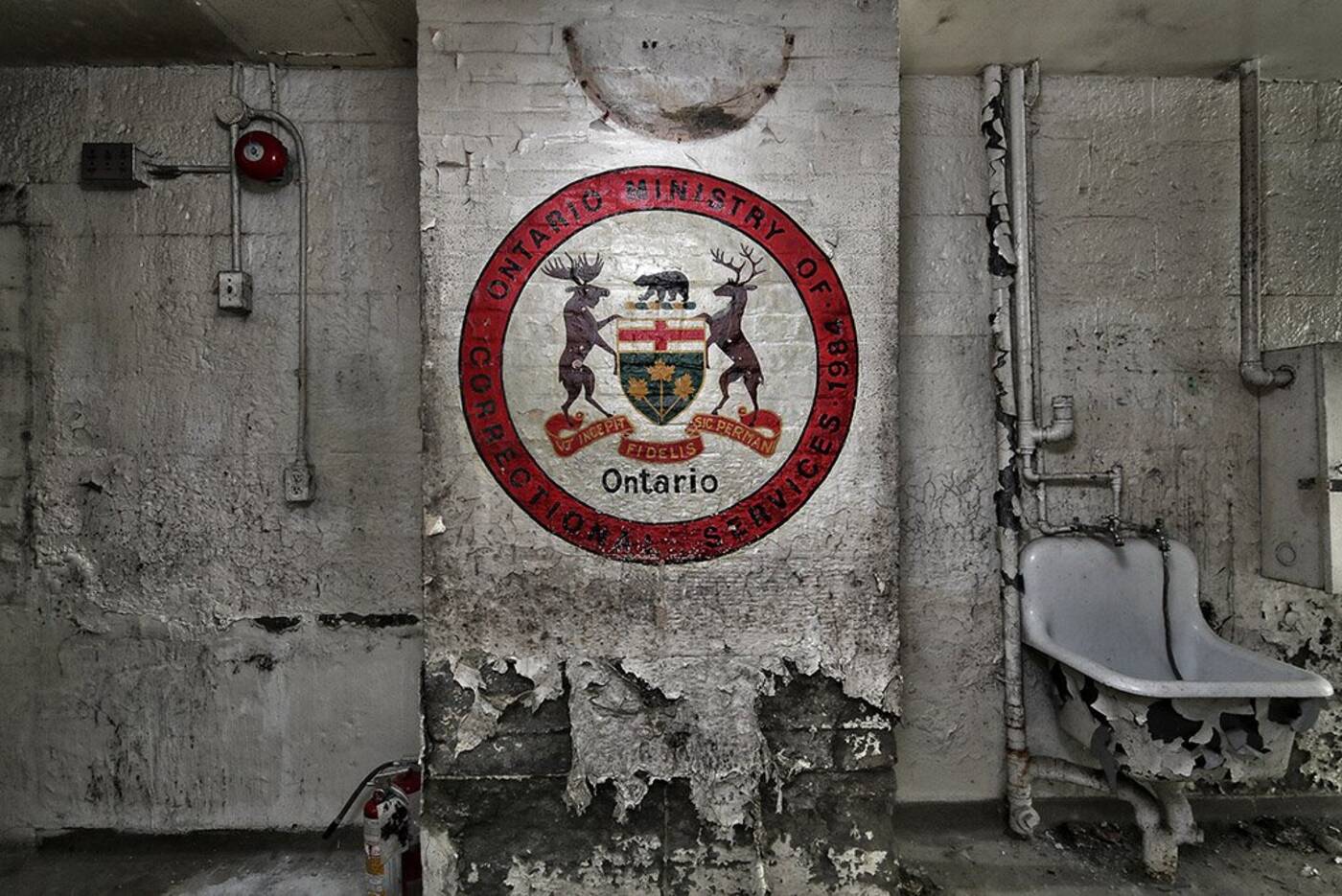 Some parts of the property are in advanced states of disrepair. Image via Chestnut Park Real Estate Limited.

The listing also boasts that this complex, originally built to "act as the centre of Government for the newly formed County of Grey," retains much of it's original character, "including Jail cells reminiscent of 1800's incarceration."

Pretty damn cool for less than what even the cheapest condo in downtown Toronto would cost right now — but again, this is no straightforward residential purchase. 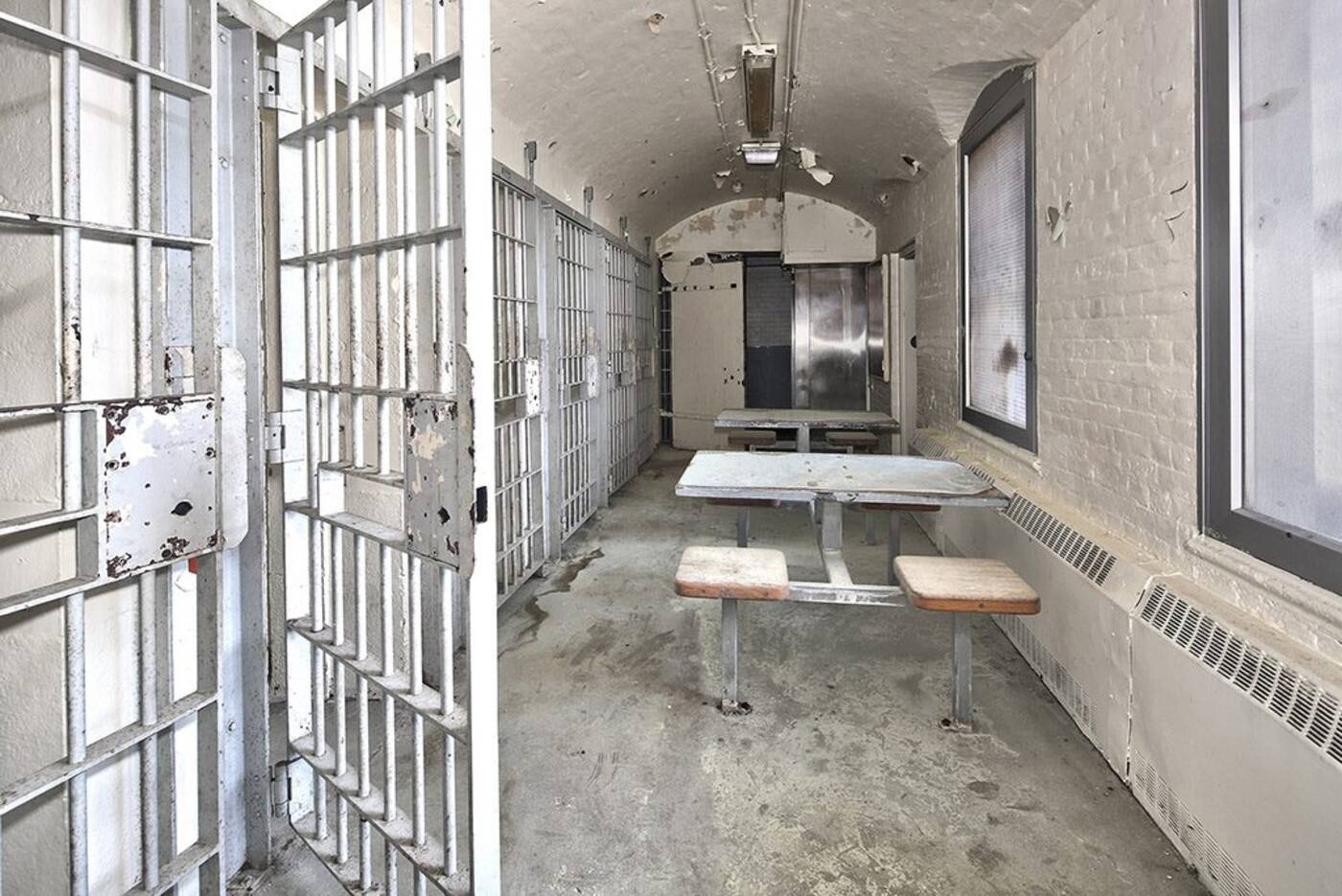 One of the property's most-unique features is a suite of 1800's-era jail cells. Image via Chestnut Park Real Estate Limited.

The entire property was declared to be "surplus" in 2014 and put up for sale by the city, though "the County Jail buildings and structures" were quickly identified as "potential barriers to redevelopment of the lands."

Some seven years and a few comprehensive heritage assessments later, the place is up for sale again — with strict conditions in place. 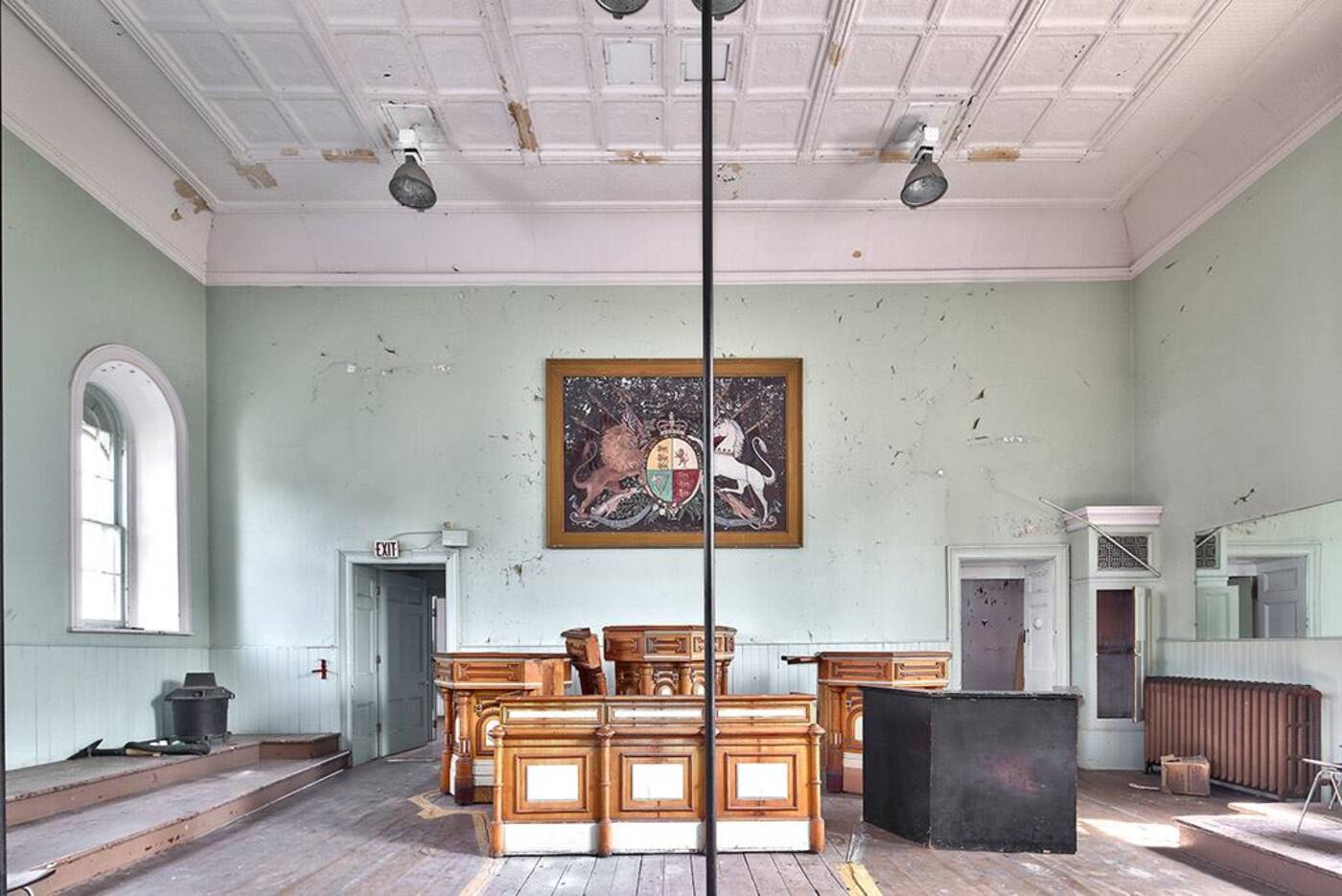 The court house was decomissioned in 2014 and has been sitting vacant ever since. Image via Chestnut Park Real Estate Limited.

The City of Owen Sound recently put up a Public Notice of Intention to Dispose of Municipal Property soliciting public comments regarding what should be done with the old court house and jail.

They found strong support among members of the public for retaining and repurposing the courthouse building, which is good since demolishing it would be tricky given the structure's designation under the Ontario Heritage Act. 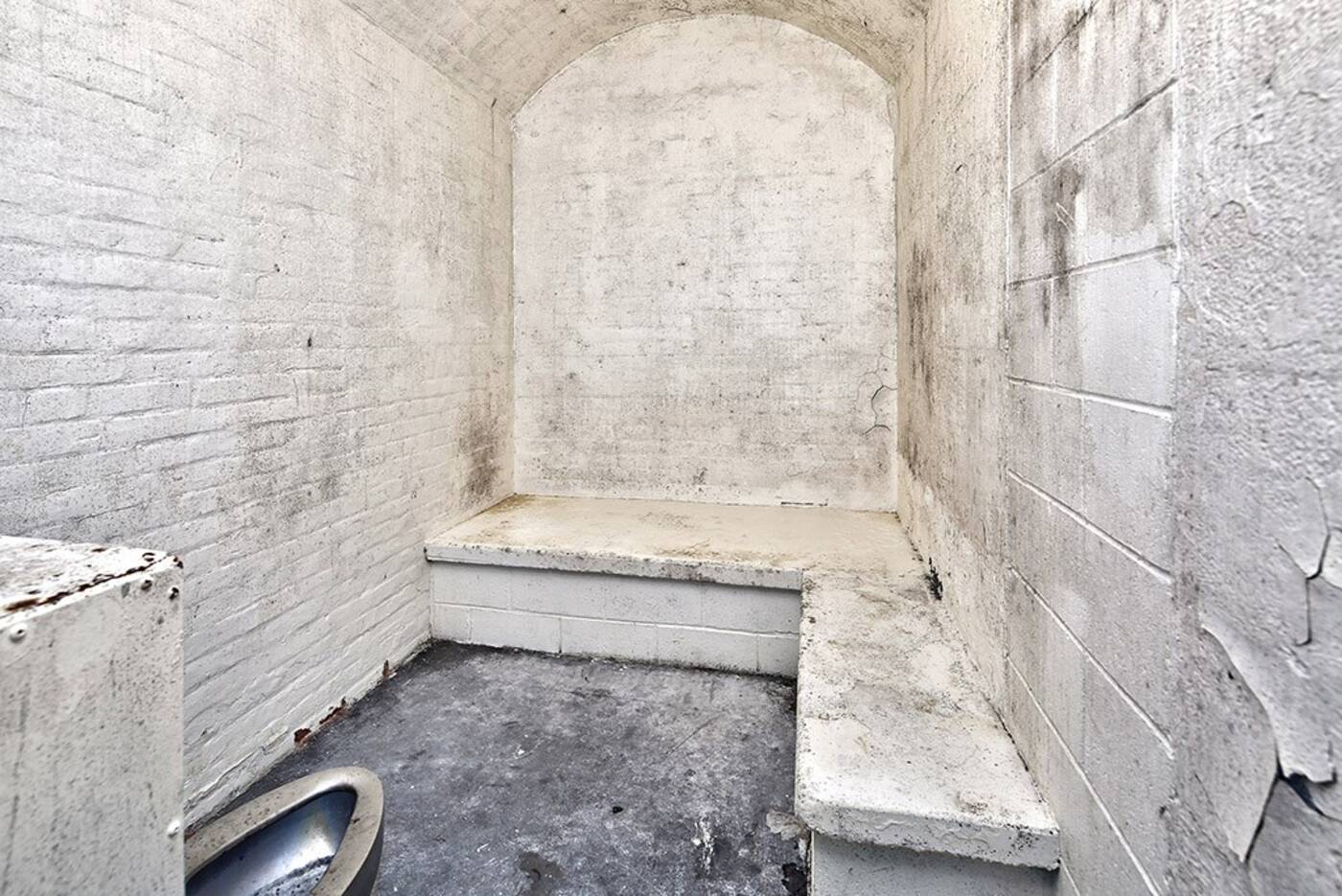 Some parts of the property lend themselves perfectly to a haunted house or escape room, but the city has specific requirements for developers to follow if they want to buy it. Image via Chestnut Park Real Estate Limited.

Four options were presented for the rest of the buildings on the property, ranging from the complete demolishment of all other buildings including the Jail Yard walls to removing only "the Governor's Residence and miscellaneous outbuildings."

Aside from a write-in option to keep all of the buildings intact, the highest-voted option among members of the public was to "retain and conserve in a mothballed state, the 1854 and 1869 Jail and Jail Yard walls." 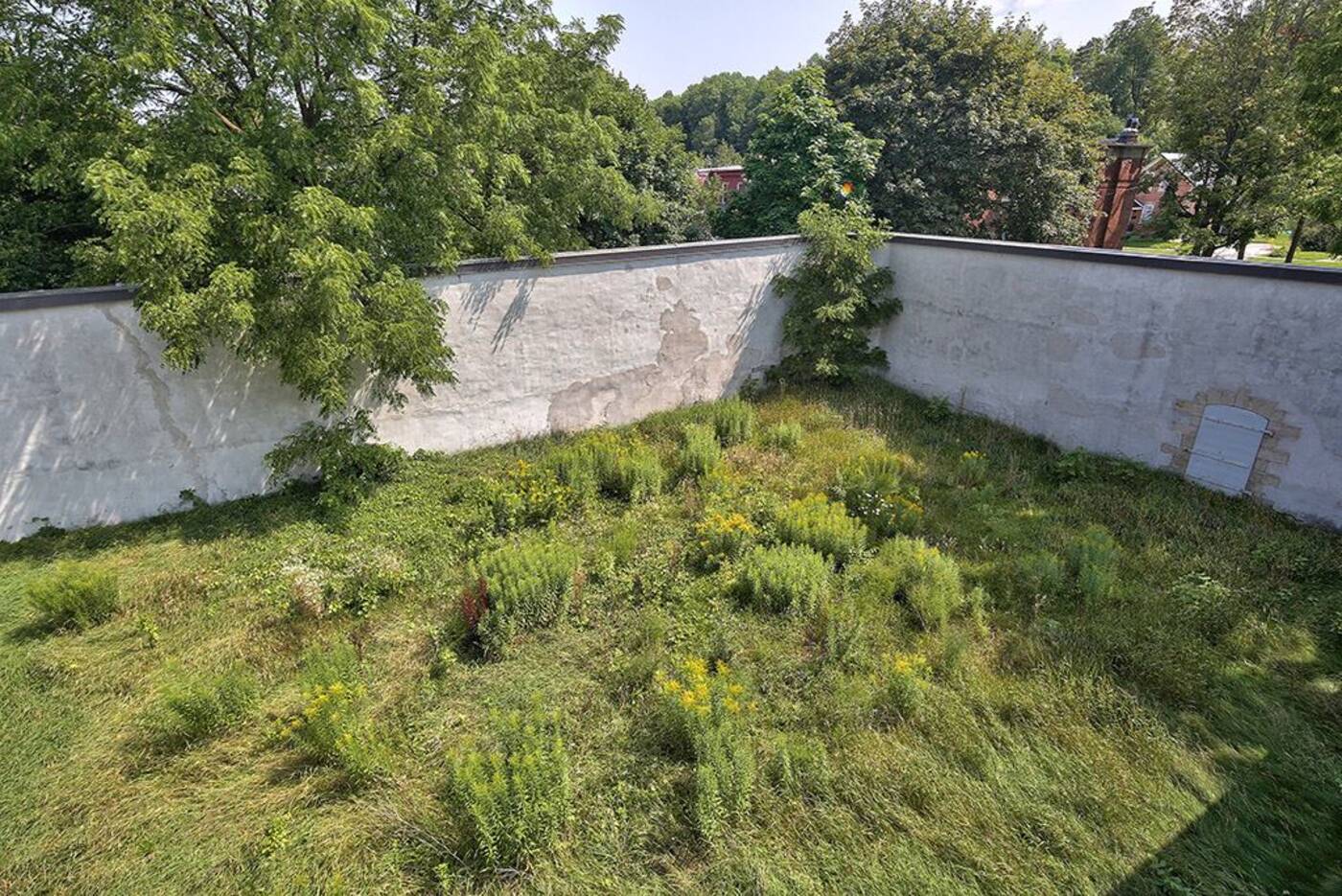 You can read all about the process and the rationale behind preserving these heritage structures on the City of Owen Sound's website, but chief to note is that they're now accepting proposals for "disposition and adaptive reuse" of the historic court-house and jail properties.

While they've had offers in the past, two prospective buyers ended pulling out due to the buildings not being suitable for their purposes. It seems as though the city now hopes to attract another developer, now that the demolition of the "seriously degraded" Governor's Residence and other hazardous outbuildings has been approved. 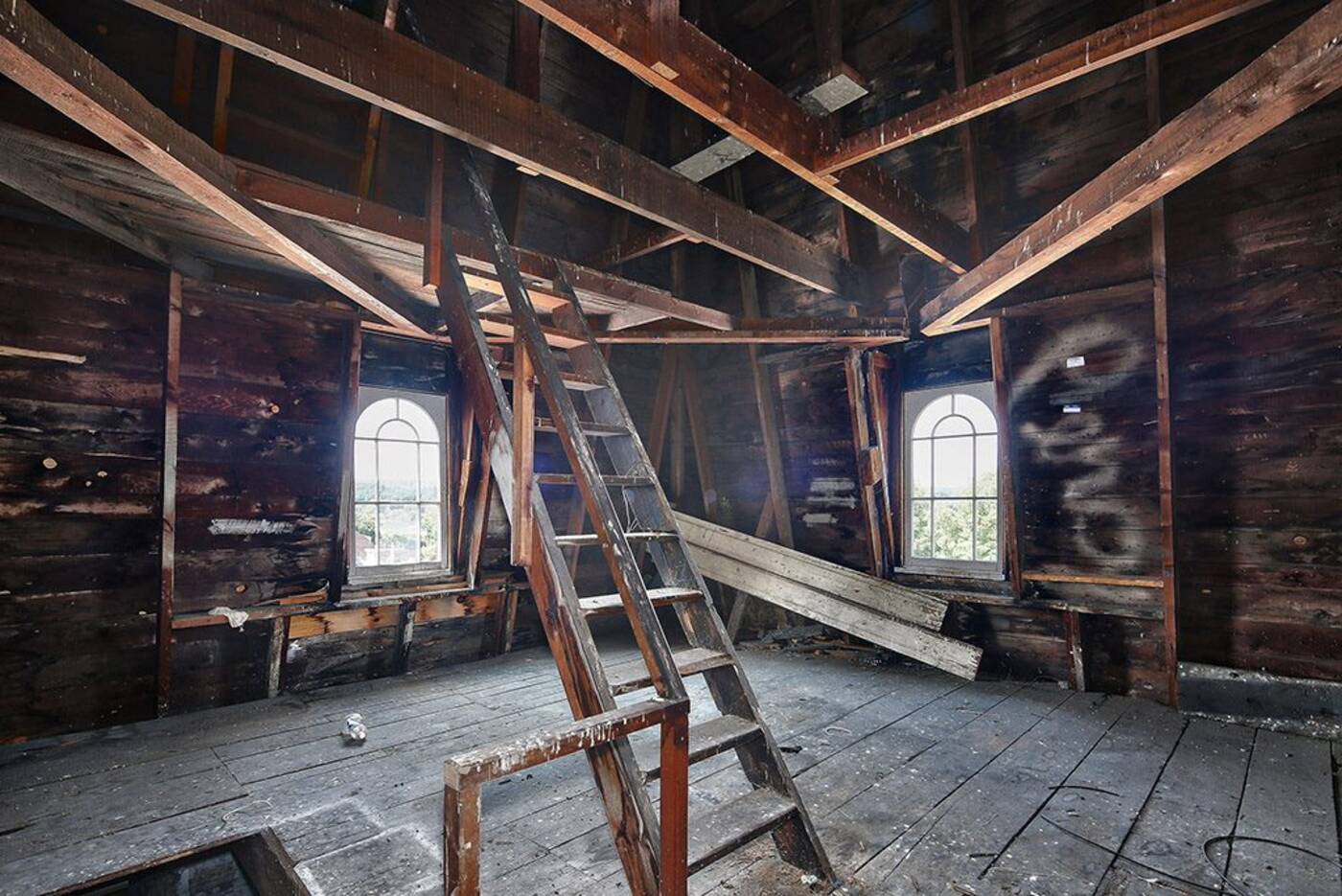 A two-and-a-half storey Governor's Residence was added to the Jail complex in 1889 but is currently uninhabitable and slated for demolishment despite its historical value. Image via Chestnut Park Real Estate Limited.

While whoever buys this land will no doubt have much work and many dollars to spend in their future, the city itself has already allocated funds to replace the Courthouse roof, and a partial demolition as recommended is covered under its 5-year capital budget for 2022.

Because the subject lands are designated and zoned as "institutional," they could easily become home to a new school, clinic, community lifestyle facility, longterm care home or a host of other things. 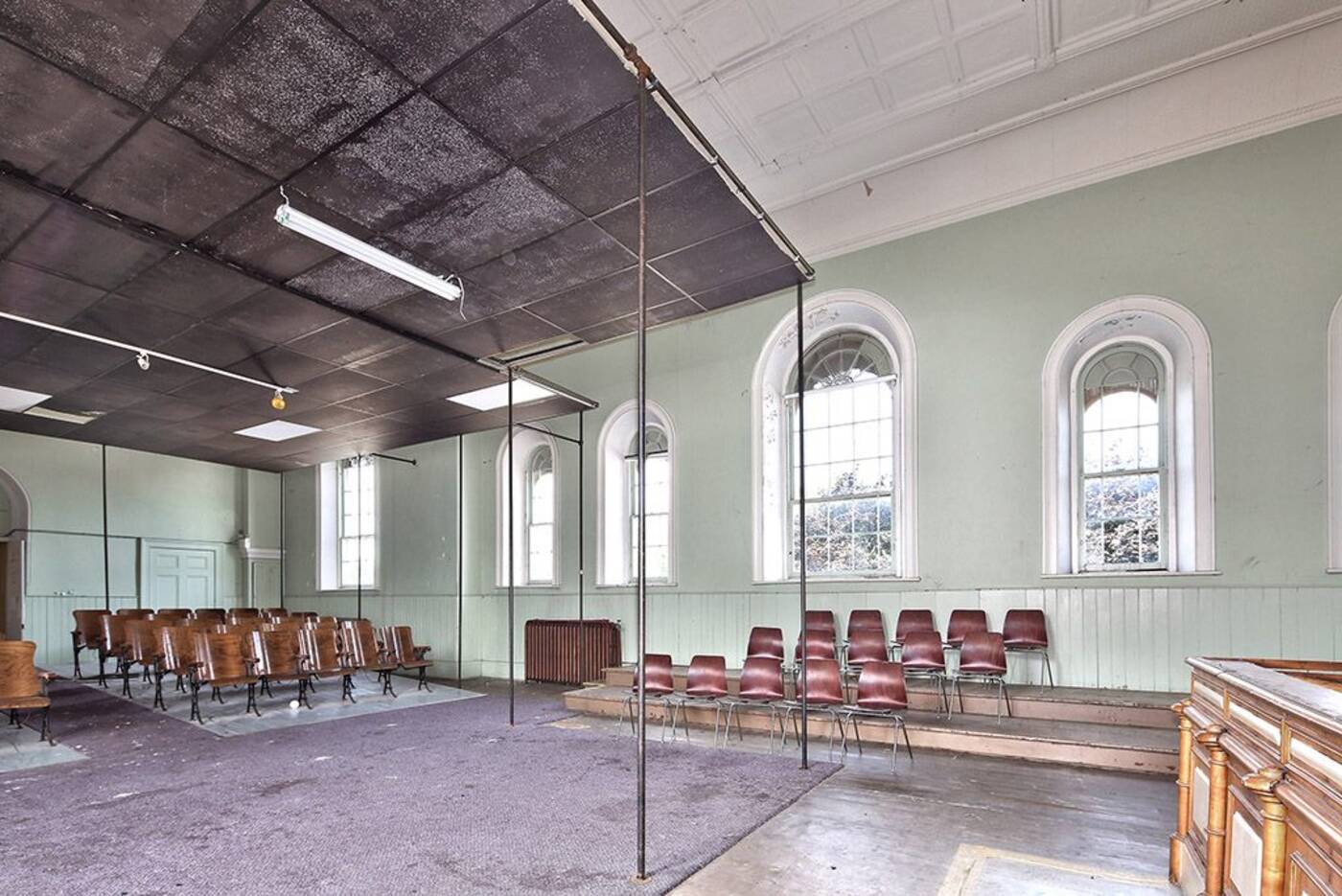 The old courthouse is on a property designated under Part IV of the Ontario Heritage Act. Image via Chestnut Park Real Estate Limited.

The city's documentation does note that the designation could likely be converted from institutional to residential, as the site is currently sitting unused.

It would certainly be interesting to see how the courthouse and jail would be incorporated into any sort residential development. 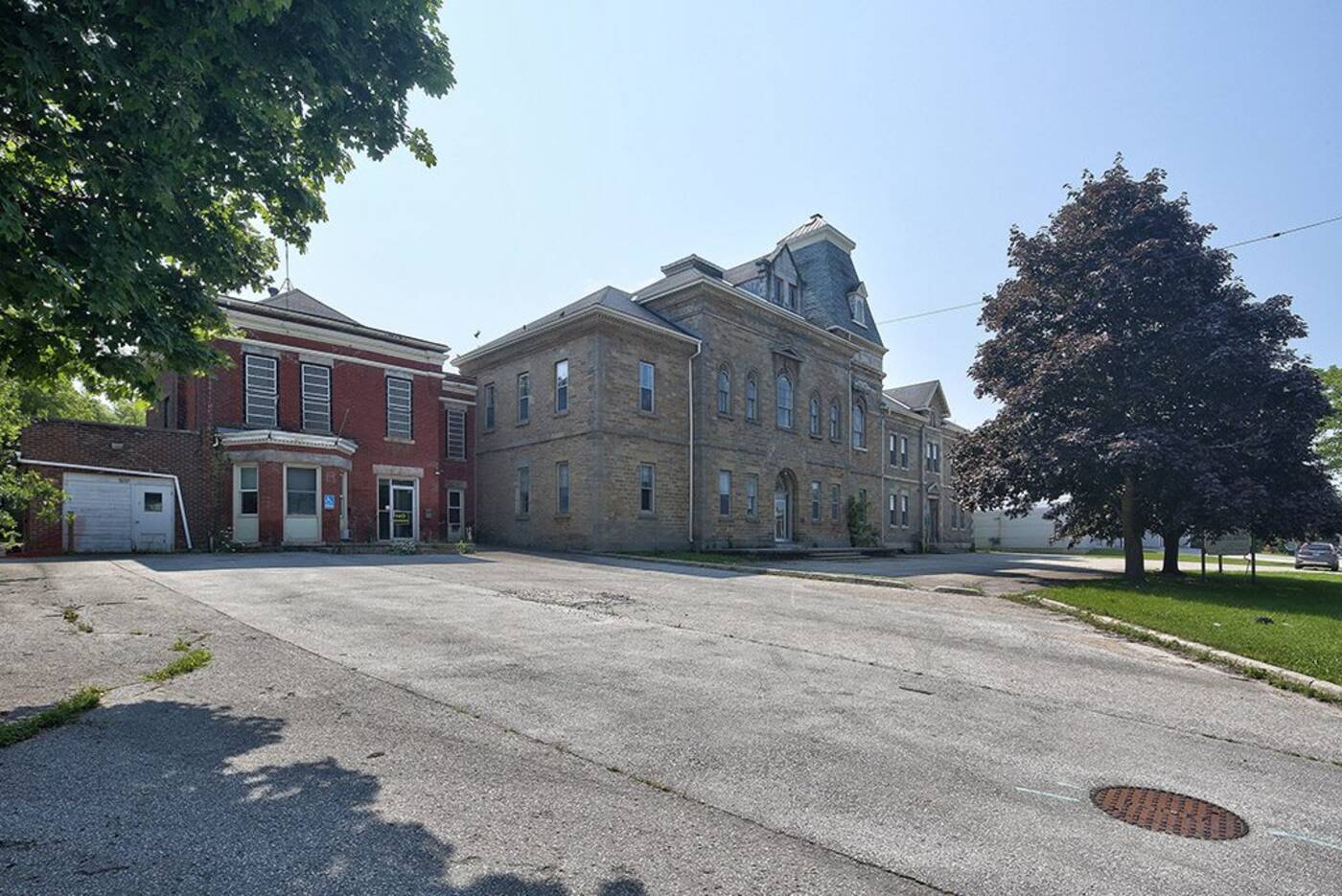 The property is sized at approximately 0.53 hectares in total. Image via Chestnut Park Real Estate Limited.