Toronto rent prices continue to stabilize after more than a year of steadily freefalling amid the COVID pandemic, but as 2021 rolls along under a lockdown that just won't seem to end, it should still be a while before we actually see an actual rebound.

In fact, some neighbourhoods across Canada's largest city are still marking both year-over-year and month-over-month rent declines.

"While this represents a 13.7 per cent decrease year over year, the average rent per square foot has stayed relatively stable throughout 2021 so far, ticking up $0.04 per square foot from January."

In other words, declines have slowed down across the board when comparing average rents month over month, but not at a uniform pace across all housing types and regional markets. 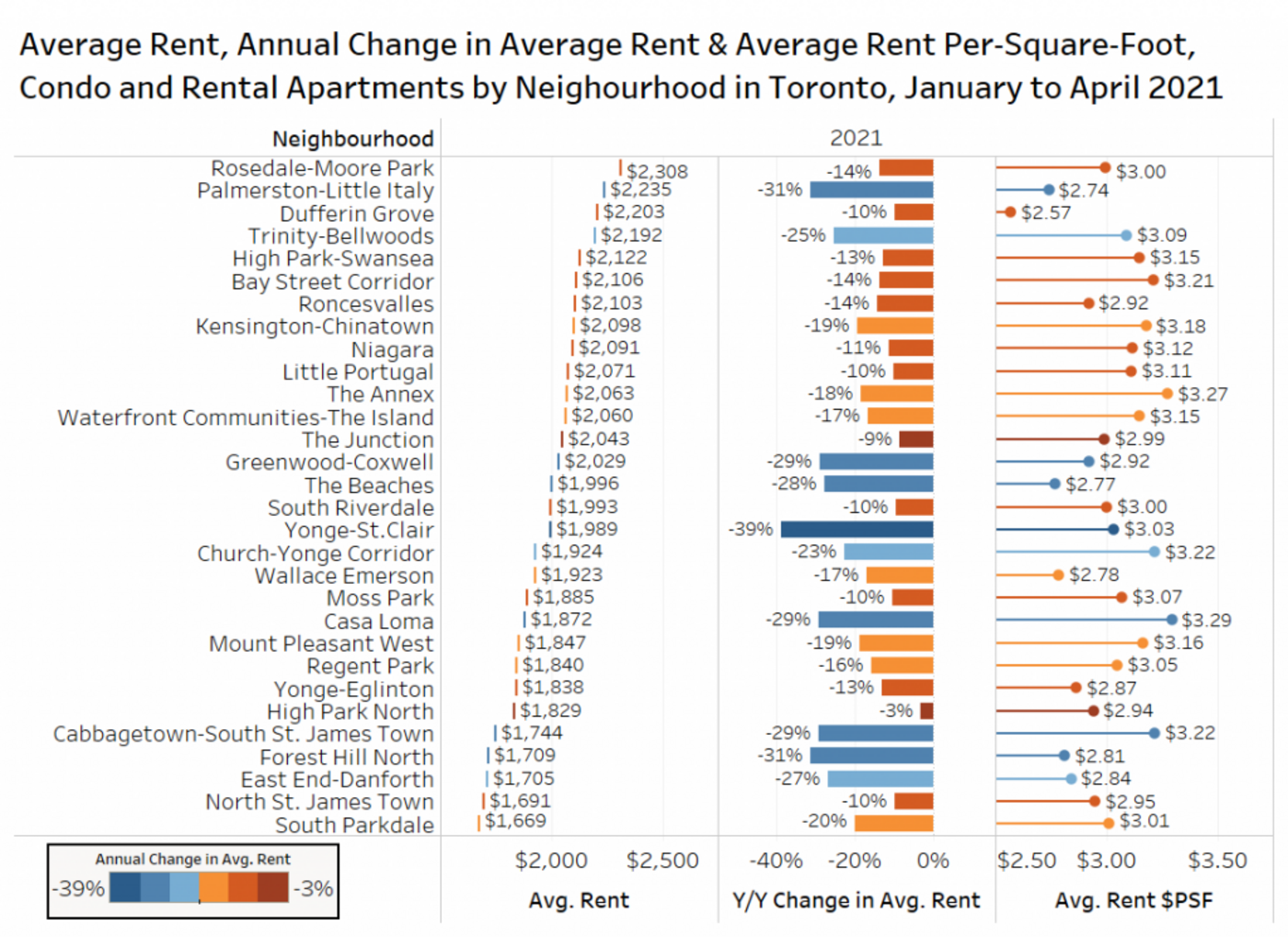 This chart shows the annual change in average rents by Toronto neighbourhood for condominiums and apartments in January to April 2021. Image via torontorentals.com.

The City of Toronto saw average prices increase for both condo and apartment rentals between March and April of 2021 by about one per cent, while other GTA municipalities saw steeper inclines: Oakville rents went up by 4.9 per cent on average, followed by Aurora at 4.1 per cent, Brampton at 4 per cent, Milton at 3.8 per cent and Ajax at 2.3 per cent.

"The most expensive rent this year has been in Rosedale-Moore Park at $2,308 per month, down 14 per cent from the first four months of 2020," reads the GTA May rent report.

In terms of the biggest annual declines, we have the Yonge-St. Clair neighbourhood with an average price drop of 39 per cent. The lowest year-over-year decline was marked in High Park North, where rent prices are now down just 3 per cent compared to the same time period one year ago.

Palmerston-Little Italy and Forest Hill North were both down 31 per cent, while Greenwood-Coxwell, Casa Loma and Cabbagetown-South St. James Town were all down 29 per cent. Average rents in The Beaches have dropped 28 per cent, year-over-year, while East End-Danforth and Trinity-Bellwoods and down 27 per cent and 25 per cent respectively. 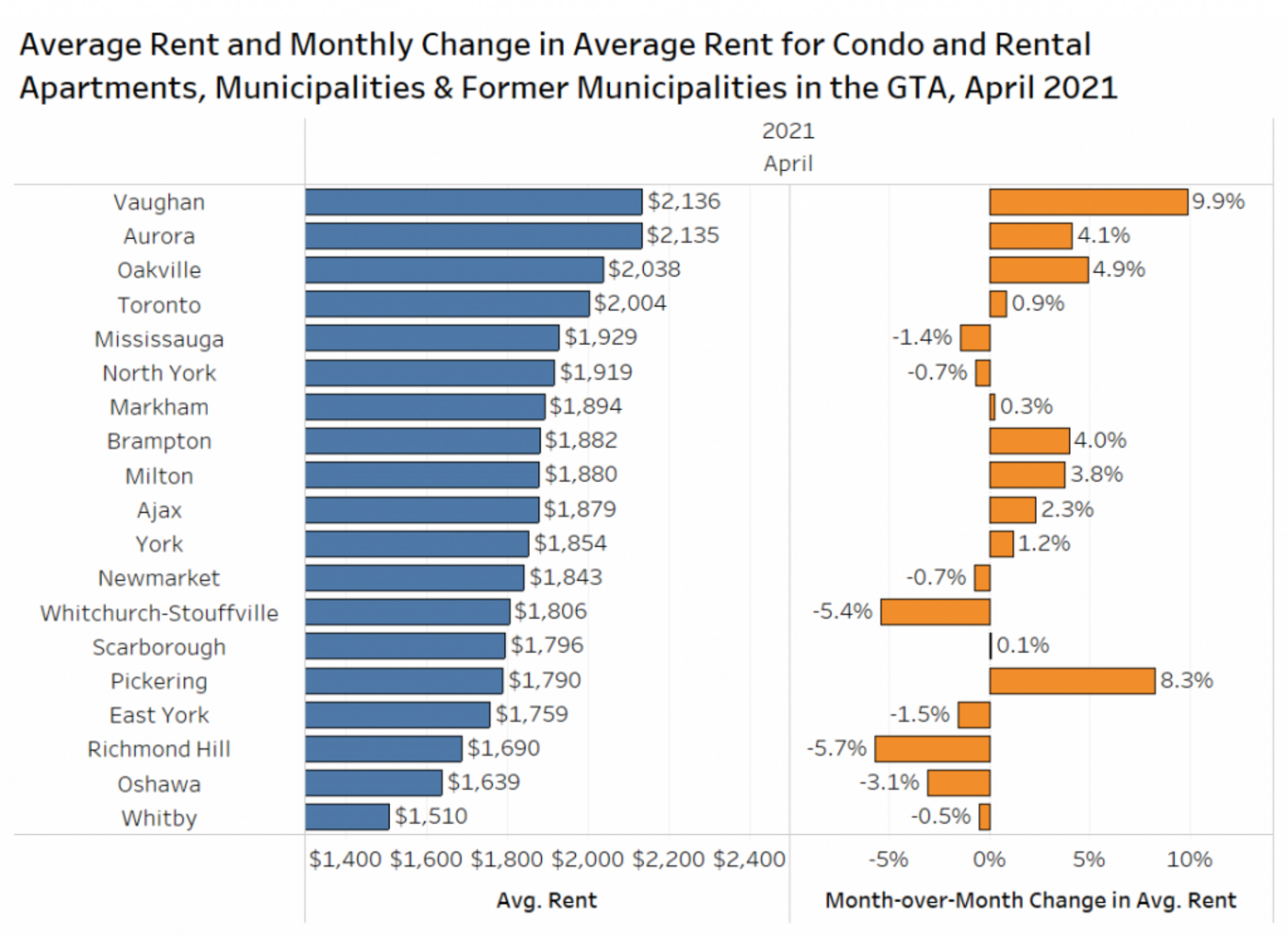 Average rent for condominium and rental apartments in GTA municipalities in April 2021, with Toronto broken up into its former municipalities prior to amalgamation. Image via torontorentals.com.

"The composition of the listings plays a factor in movements in the average rent on a monthly basis," notes the report.

"If there were a lot of large units for rent last year and a lot of smaller units for lease this year, the average rent is lower, but it may not reflect landlords actually lowering rents."

To wit; the analysts say that average rents for four-bedroom units (primarily single-family dwellings) have increased over the time period surveyed, while the average rent for smaller units has decreased.

"Tenants are still seeking larger properties while they work from home and their children learn virtually. With the stay-at-home order in place, many prospective tenants are looking for a property with a back yard," reads the report, which notes that studio, one bedroom and two-bedroom suites were all down about 15 per cent year-over-year on average.

Meanwhile, the average rent on four-bedroom units in the GTA saw an annual uptick of roughly 10 per cent last month.

"Look for continued flatness until the fall in Canada, and rents to start rising more rapidly at that time," says Bullpen president Ben Myers. "The changes to the mortgage stress test and the sharp rise in house prices will encourage more people to continue renting and accelerate the late-year rent increase."