With lockdown measures now fully in place for Toronto and Peel under Ontario's new colour-coded restriction framework, condo boards are once again getting heavy handed with their visitor policies.

"Dear Owners and Residents," reads a letter distributed to all units in one downtown Toronto Standard Condominum Corporation (TSCC) tower.

"At 3:30 p.m. on Friday, November 20, 2020, the Premier and senior cabinet ministers held a press conference where they announced that Toronto (and Peel) will go into lockdown… As of Monday, November 23, we will restrict all non-essential visitors to our building."

The letter, signed by the building's board of directors, notes that "COVID-19 is spreading at an alarming rate and the health and safety of our residents is our number one priority."

It also clarifies that indoor gatherings with people outside of your own home are currently prohibited under Ontario's grey zone lockdown rules. 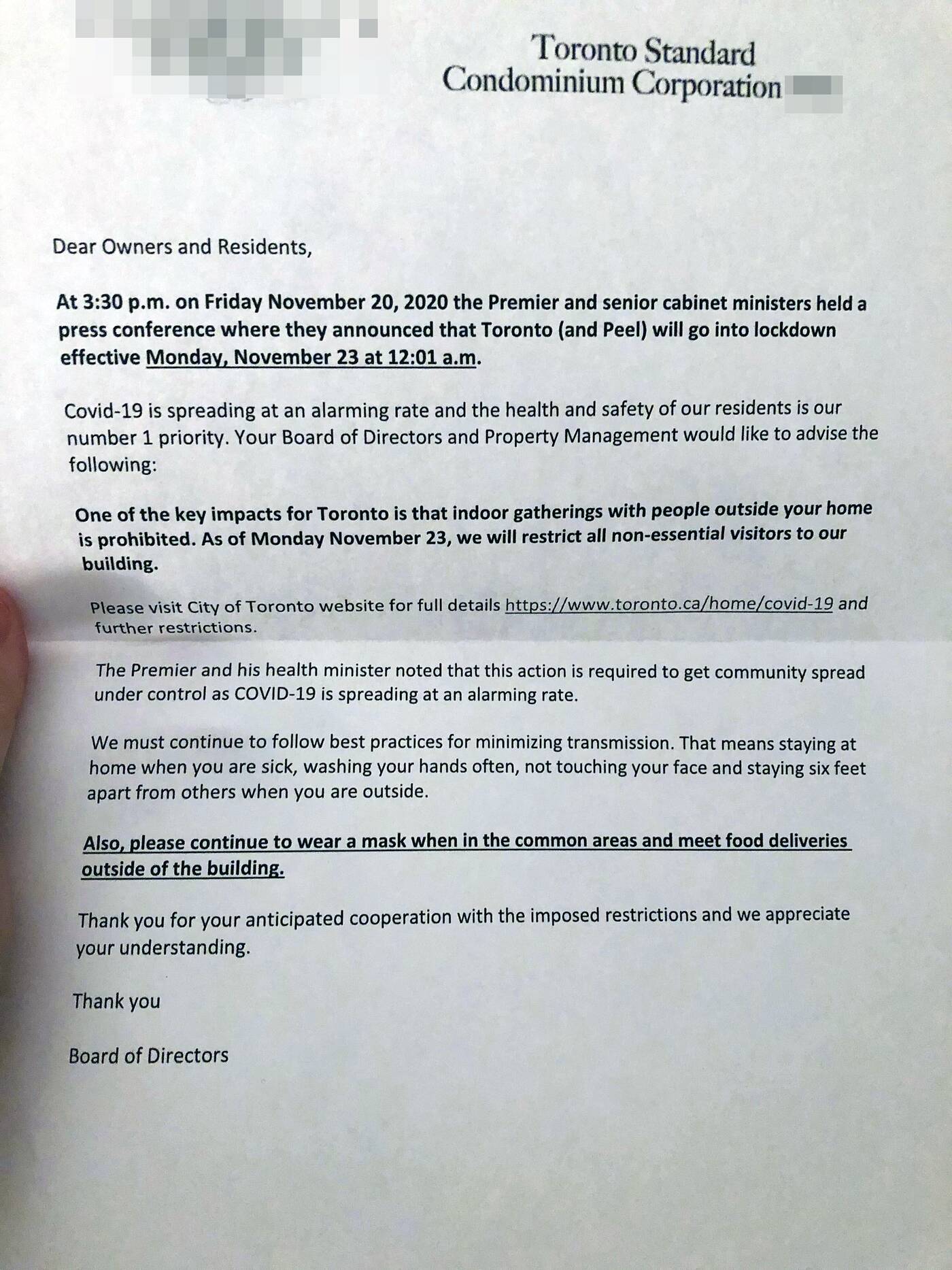 While true that indoor gatherings are prohibited, residents of some buildings have been wondering whether or not their condo boards can legally keep visitors out of their homes.

Under Section 117 of Ontario's Condominium Act, as passed in 1998, condo boards have the authority to control common elements within the building — including elevators, hallways, foyers and the like — specifically if the use of that space is likely to "damage the property or the assets or to cause an injury or an illness to an individual."

Unless you have an accessible outdoor entrance, chances are any visitors you'd have over would need to pass through a common space to get to your unit, and with the threat of COVID-19 looming, such an activity could reasonably cause illness to an individual.

This matter could (and has been) debated at length, but several buildings have implemented such policies regardless of any potential future consequences.

Not all residents are pleased, but the same could be said for how the province has handled this second major lockdown in general.

It is a total joke. While single people living alone are treated like lepers with ‘no visitors’ being allowed to enter condo buildings, parents and students wave goodbye as they head off for their day.

Recent posts on several condo-dense neighbourhood Facebook pages suggest that many residents are actually in support of the move to ban visitors, especially given how many private illegal gatherings have been taking place of late.

"I recently saw some instagram stories of people in Liberty Village having a party indoors with no masks, precautions and doing shots — and they were so happy to brag about it," reads one such post.

"Looks like 8-10 people but that's too many IMO when we've been asked to not socialize with anyone outside our households."

Others aren't so sure about the idea of letting concierges try to enforce government regulations.

"Ford government prohibiting visitors to condos by having building security deny entry to non residents," wrote one resident on Twitter. "So for the ppl that don't have a concierge or security, they’re in the clear and if you live in a house it's even better. Toronto ain't having that... Watch the push back."

Not all condo boards and property management firms have gone so far as to try and ban visitors, but all have been forced to close down common amenities such as gyms, party rooms, guest suites and business lounges under the current lockdown framework.