This is what Dufferin Mall could soon look like

The end is near for Toronto's best-known trifecta of questionable late night drive-thru destinations: The Taco Bell/Pizza Hut/KFC complex at 900 Dufferin St. could soon be but a ghost beneath a swanky new residential tower.

Some seven months after rumours first surfaced about its intentions to redevelop a portion of the sprawling Dufferin Mall site near Dufferin and Bloor streets, Primaris Management Inc. — the company that owns your favourite Mall with WiFi — has formally submitted a development application with the City of Toronto.

Renderings for the project show what the company has in mind for the "underutilized lands" that currently house a parking lot, a Beer Store, an LCBO and the aforementioned KFC/Pizza Hut/Taco Bell at the northern end of the site.

The plans are ambitious, to say the least. 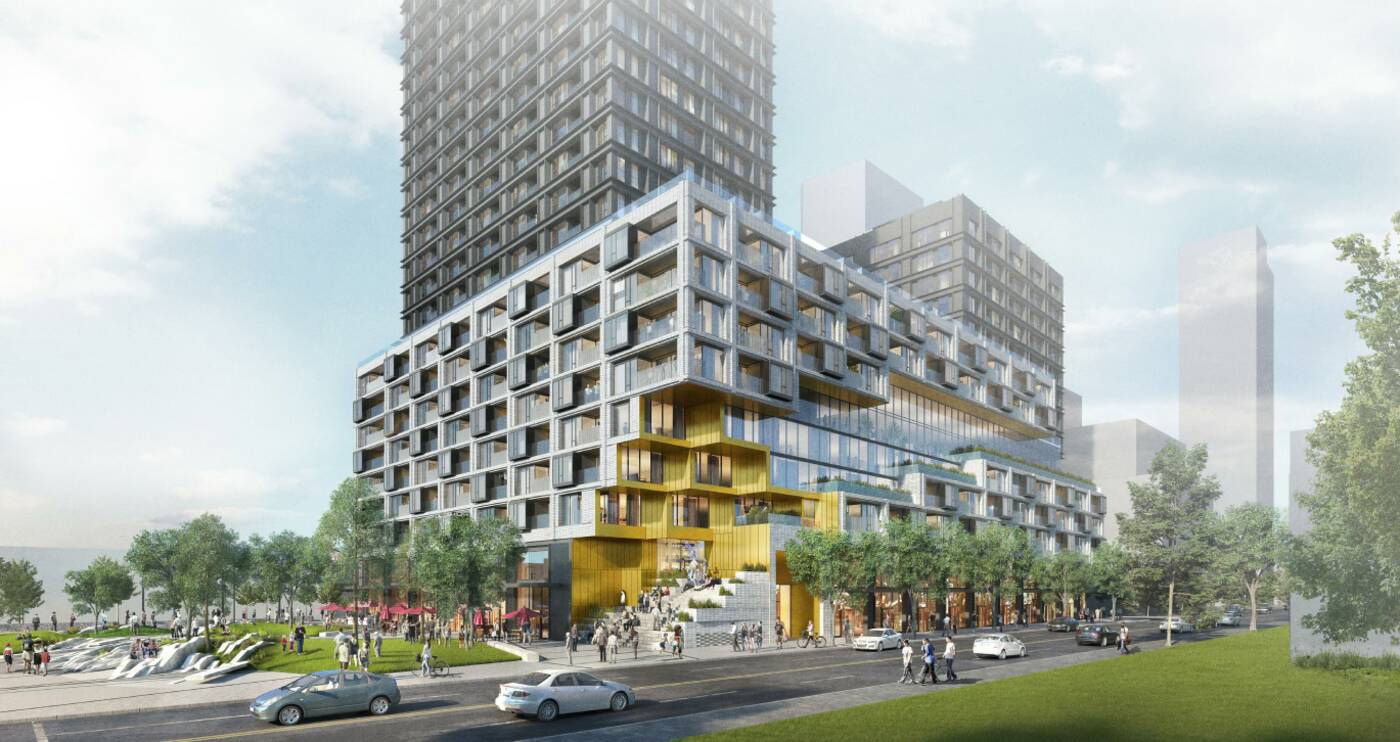 The eastern block of the new Dufferin Grove Village development would house two residential towers of 23 storeys and 14 storeys atop an eight-storey mixed-use podium.  Image via Quadrangle Architects Limited/City of Toronto.

If all goes well for Primaris, it will build a new mini-hood of sorts called "Dufferin Grove Village" in the area bordered by Brockton Stadium to the west, Croatia Street to the north, Dufferin Street to the east and existing Dufferin Mall structures to the south.

Designed by Quadrangle and Urban Strategies, the village will be bisected by a new private road connecting Dufferin and Croatia.

The western portion of the development will feature two massive residential towers rising 35 and 39 stories, both extending from the same six-storey base building that connects directly to Dufferin Mall.

Two more residential towers of 23 storeys and 14 storeys will rise from an eight-storey base on the eastern portion of the site — where the KFC/Taco Bell/Pizza Hut building is right now. 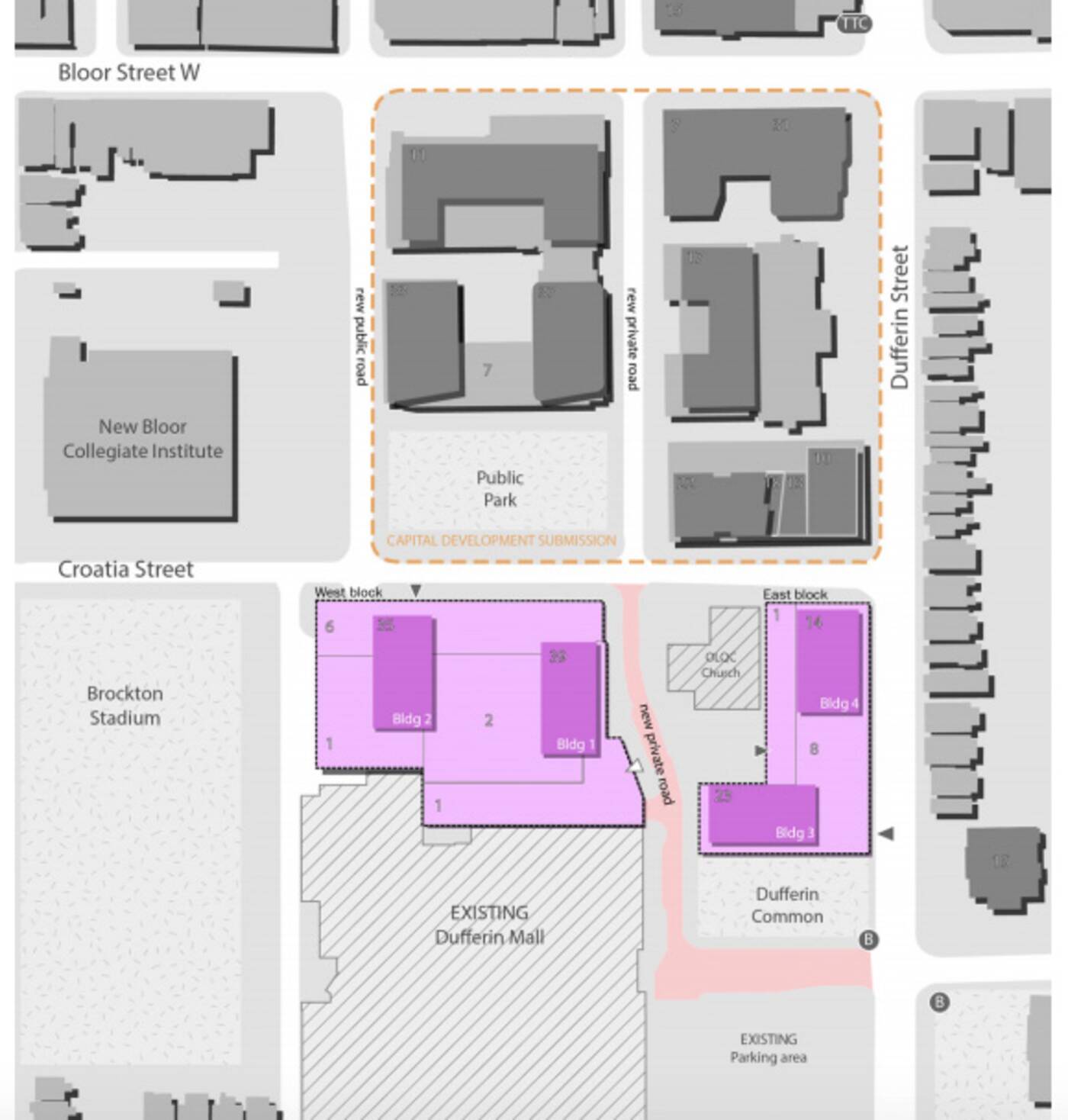 A map of the development site proposes a new private road running through the northern portion of the Dufferin Mall parking lot. North of Croatia Street, a separate development is proposed. Image via Urban Strategies Inc./City of Toronto.

The taller building would be flanked by a new, 1,560-square-metre public park to the south called Dufferin Commons, described by Primaris and Urban Strategies Inc. as "a gathering space for participating in urban life."

In total, 88 per cent of the development would be reserved for residential uses, with 1,135 brand new units extending across the four towers.

Development application materials state that all of these units are "currently planned as rental," and that more than half of them would be "larger two- and three-bedroom dwellings."

Both base buildings (or "podiums," as builders call them) would contain a mixture of retail, residential, commercial and amenity space. 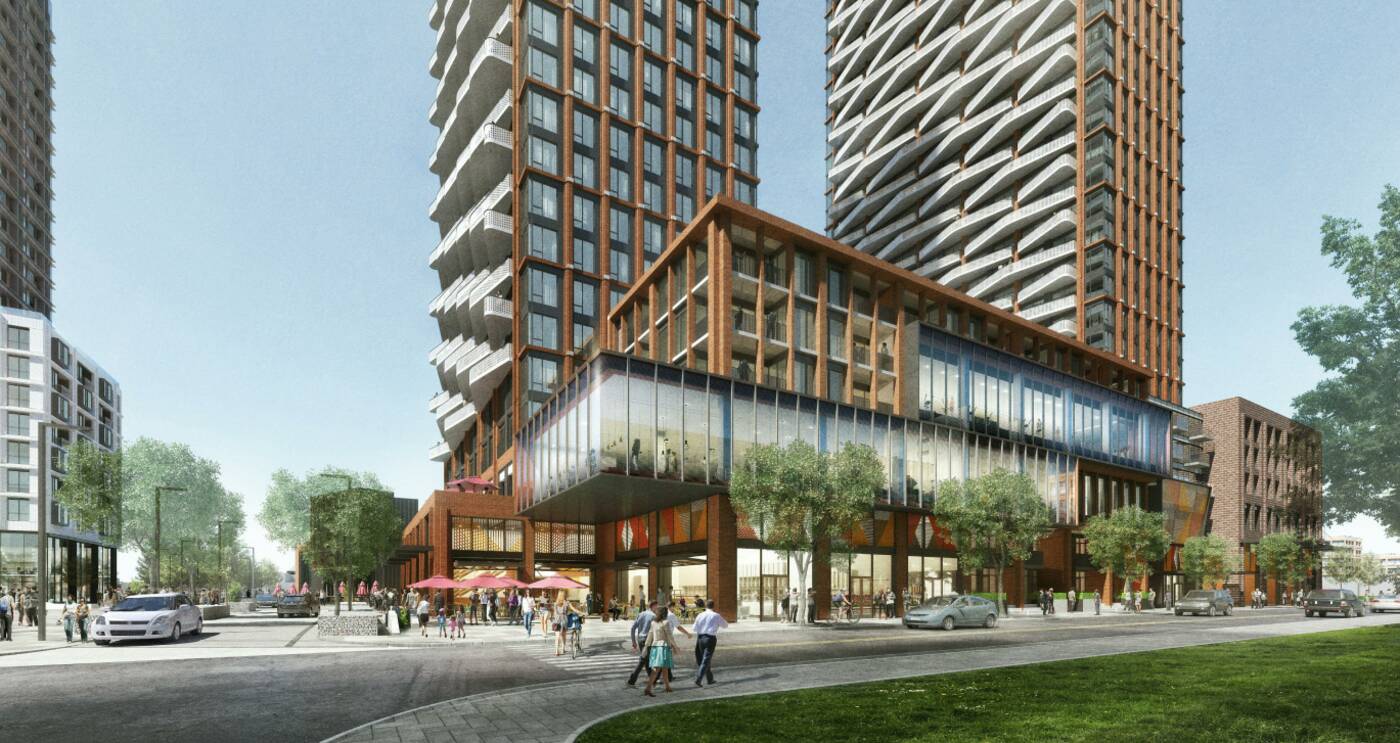 The west block of the development would see two towers of 35 and 39 stories rise from a new podium connected to the Dufferin Mall. Image via Quadrangle Architects Limited/City of Toronto.

In terms of design features, we can expect wavy-looking balconies, chic modular cutouts, landscaped setbacks and a thoughtfully-reworked public realm.

"The landscape design looks to the site's existing and historic uses and materials for inspiration. Surface paving patterns recognize the directional flows of past watercourses and urban form," reads the project's planning rationale document.

"The existing parking lots are full of reusable resources – asphalt and concrete, wood, metal, and resilient plants – which can be reused and artfully rearranged and showcased throughout a new park."

Inspired directly by Denison Creek, which used to run through the site, the park itself will feature wave-like, sculptural concrete seating structures and "large earth mounds planted with native vegetation." 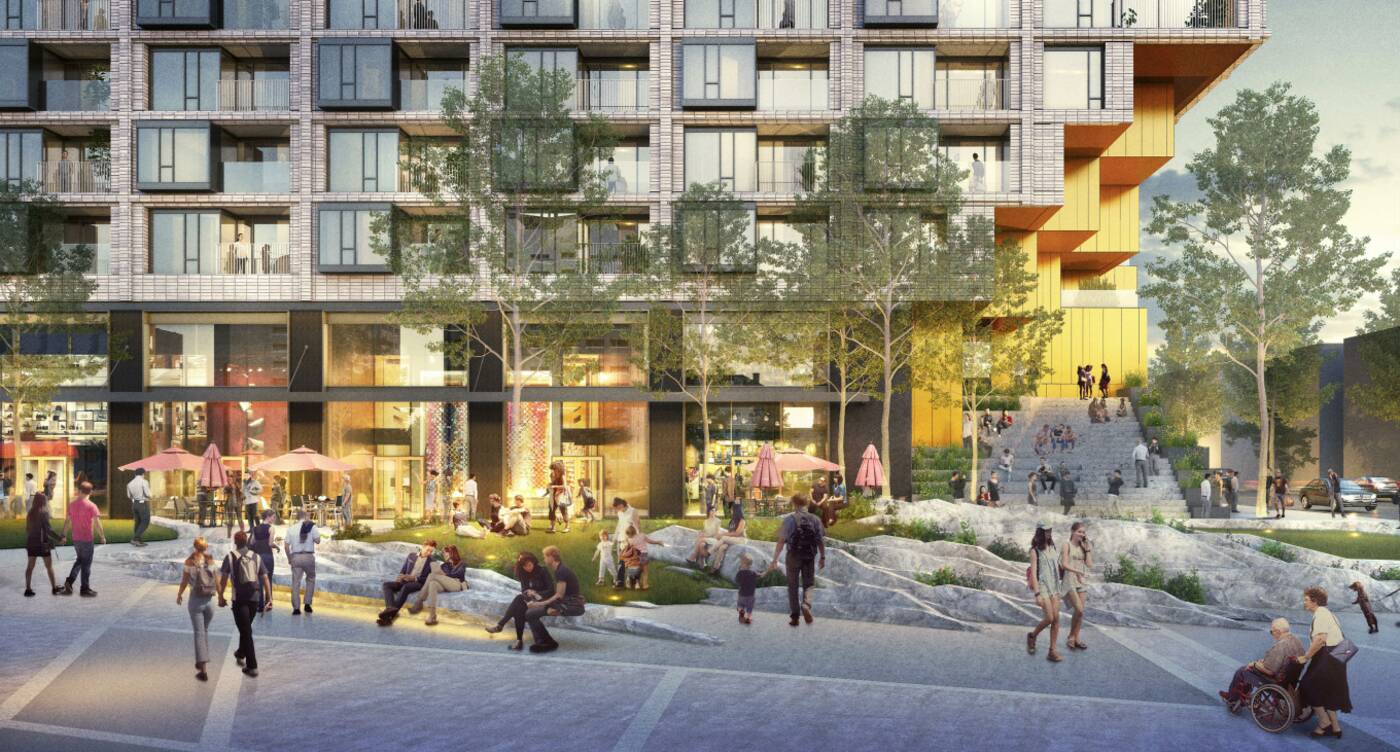 A new public park of 1,560 square metres is proposed for the southeastern edge of the development site. Image via Quadrangle Architects Limited/City of Toronto.

"The park is intended to serve an urban living room or 'common,' with plenty of seating and healthy, thriving, vegetation to create a vibrant gathering space for participating in urban life," reads the planning rationale.

"It will be an inclusive and universal space, designed for a broad range of ages and culture, but primarily for humans — pets of residents will be accommodated on rooftop spaces."

As for when all of this will come to fruition remains to be seen, but fans of the Duff can rest assured that this first phase of redevelopment will not result in the loss of any mall space.

Rather, Primaris intends only to "enhance and expand" the mall through this project by introducing new uses for the space into the mix.