Canada's most expensive home is for sale just outside Toronto

If you're a multimillionaire looking for a home in the 'burbs, look no further than Oakville, where you can buy the most expensive house for sale in Canada for a cool $59 million. 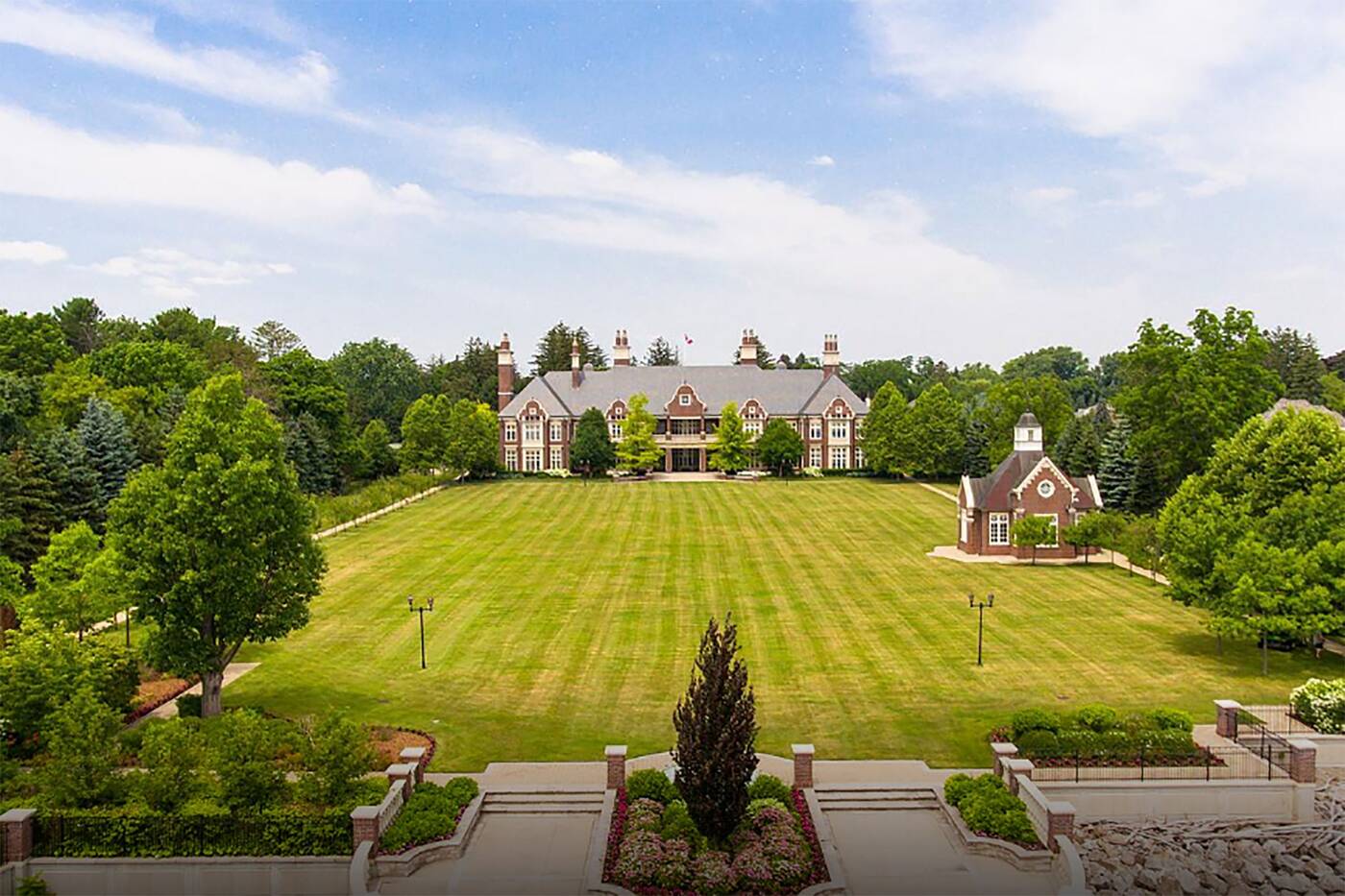 Chelster Hill began construction in 2001 and was completed in 2006. Photo by Andre Mckenzie.

The down payment alone on this gargantuan waterfront castle at 1150 Lakeshore Rd. East will set you back $11.8 million, and a monthly payment will cost roughly $257,341—basically four times what the average Canadian makes in a year.

The home of retired beer mogul Hugo Powell, former president of Labatt Brewing Co. and ex-CEO of Belgian brewing company Interbrew, Chelster Hall may look like it was built in the 1800s but it was actually only completed in 2006. 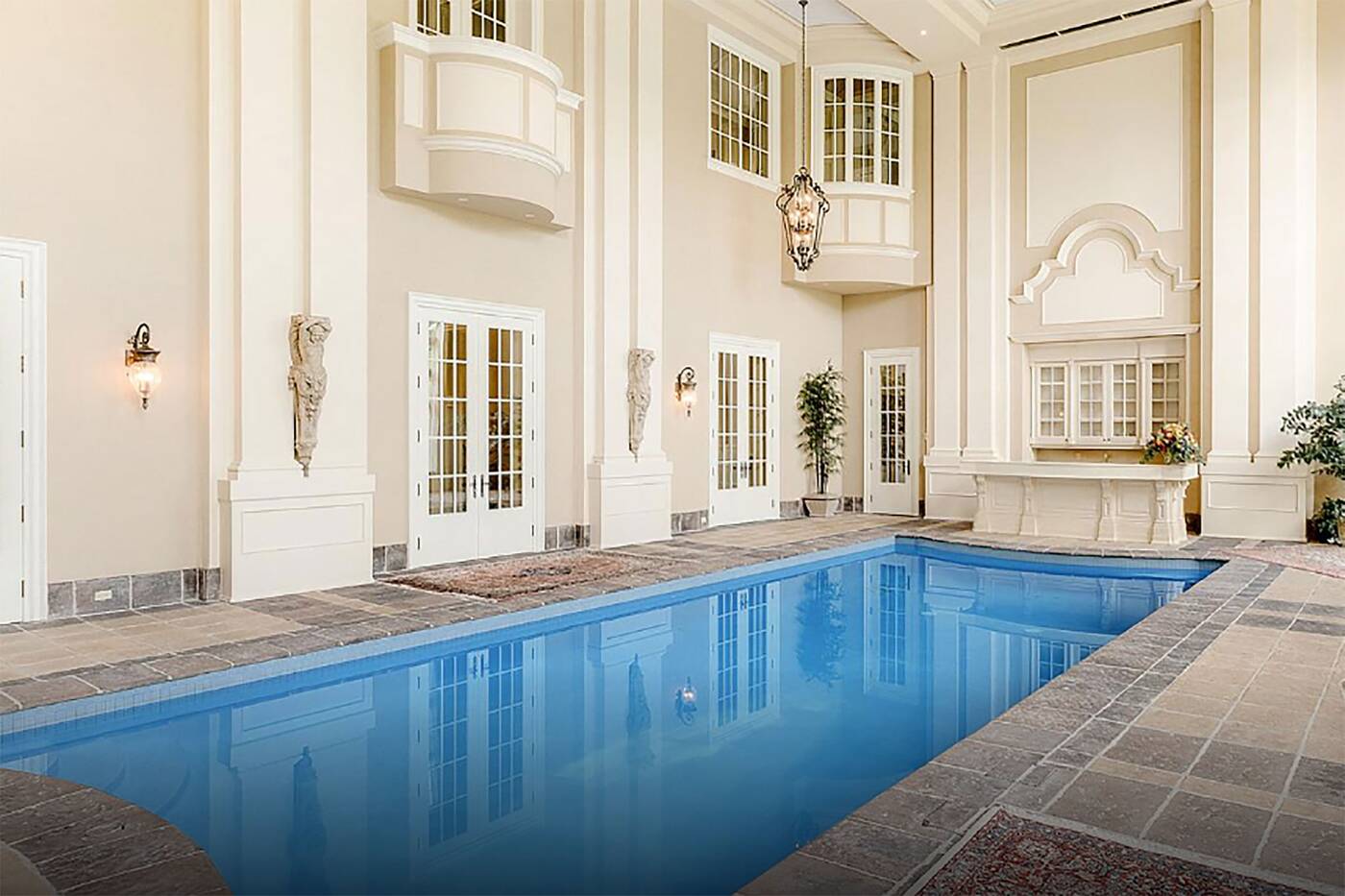 The property features an indoor and outdoor pool, plus many other hotel-like amenities. Photo by Andre Mckenzie.

The ten-acre property, designed by local architect William Hicks, was inspired by the historic homes of England, specifically the Jacobean architecture of Blickling Hall, where Anne Boleyn was born.

Named after Powell's golden retrievers (the most rich person thing to do ever), this property is essentially the ultimate place for wealthy folk to entertain their wealthy friends. 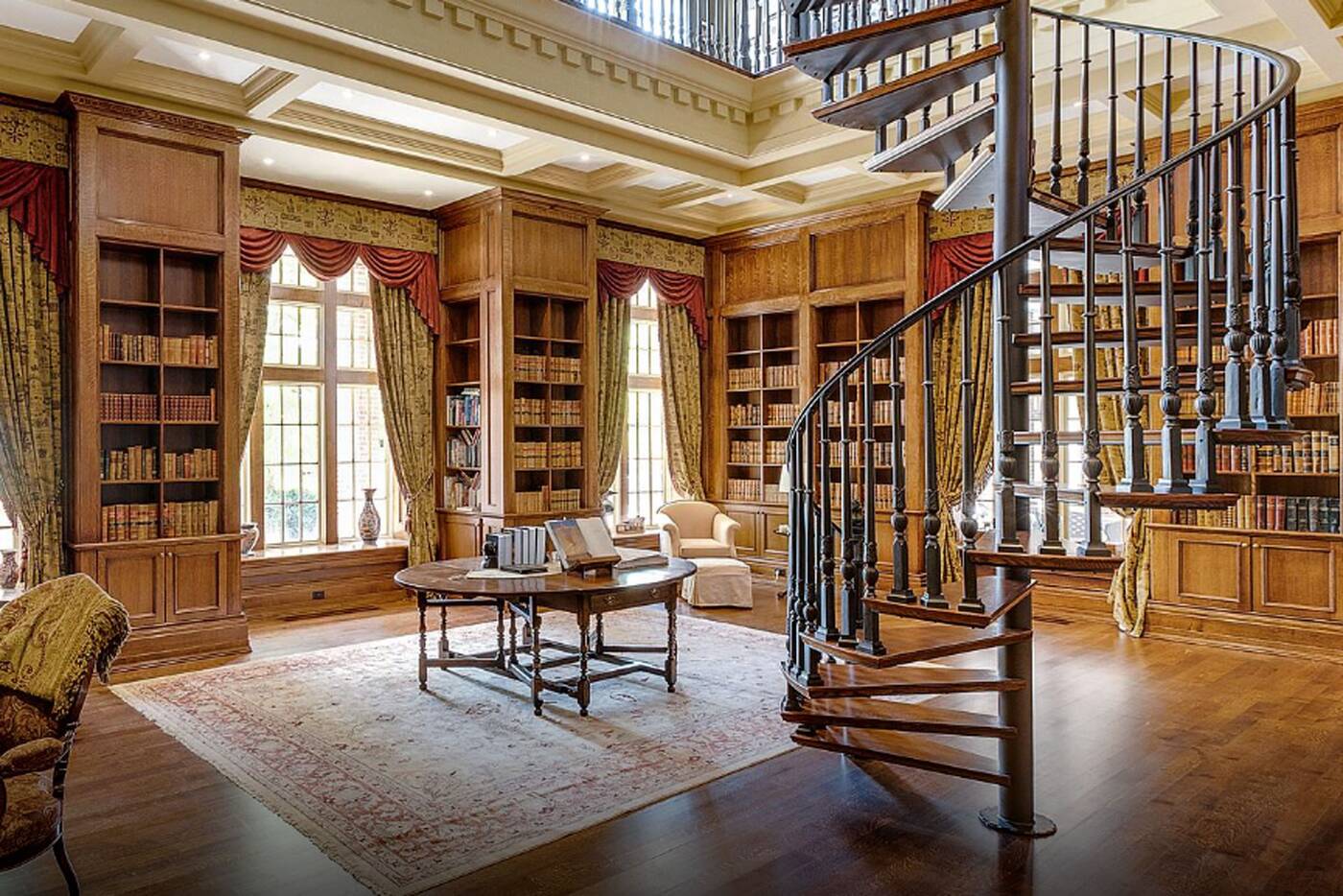 The Jacobean-style home has a library with a winding staircase. Photo by Andre Mckenzie.

Those with a net worth of $200 million and over (aka the only people who can afford this property) will feel extra safe with two sets of gates arming the entrance—a security measure Powell implemented after being robbed at gunpoint in Brussels.

The 43,850 square-foot house is equipped with six bedrooms, 13 bathrooms, and enough parking spaces for 30 Maybachs and Lambos, with a James Bond-style underground lot for avid car collectors. 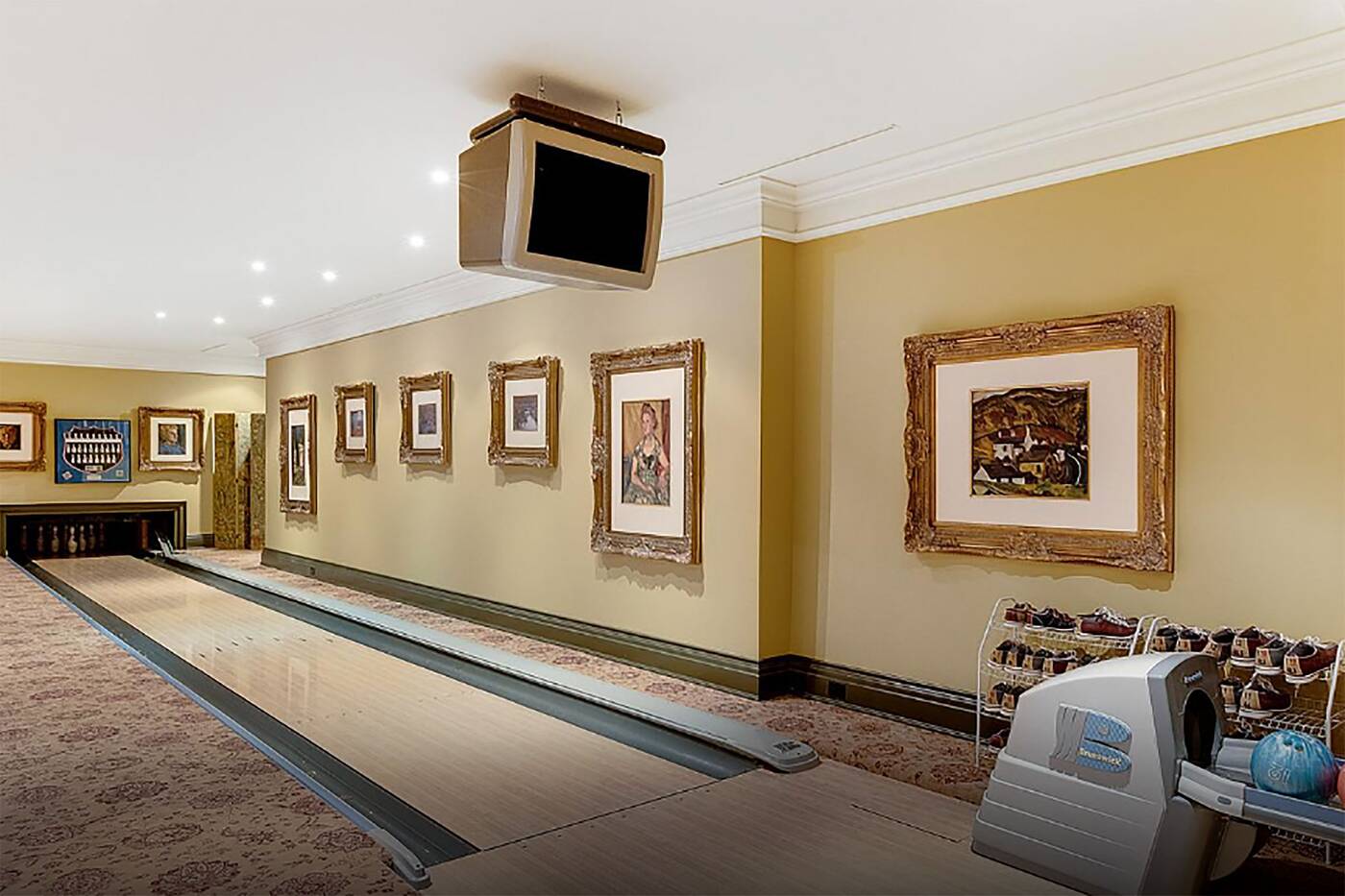 The basement has a movie theatre, dance room, and a full bowling alley. Photo by Andre Mckenzie.

Aside from the standard chandeliers and fireplaces, the home comes with an elevator, indoor and outdoor pool, full gym and spa. There's also a Tuscan wine cellar big enough to store all 7,000 bottles of Château so-and-so's.

In terms of entertainment, you'll find a full movie theatre, billiards room and a bowling alley in the basement. Outside is a tennis court—you're not rich if you don't don a tennis outfit at some point during the day—and a sprawling forest of trees, planted pre-construction. 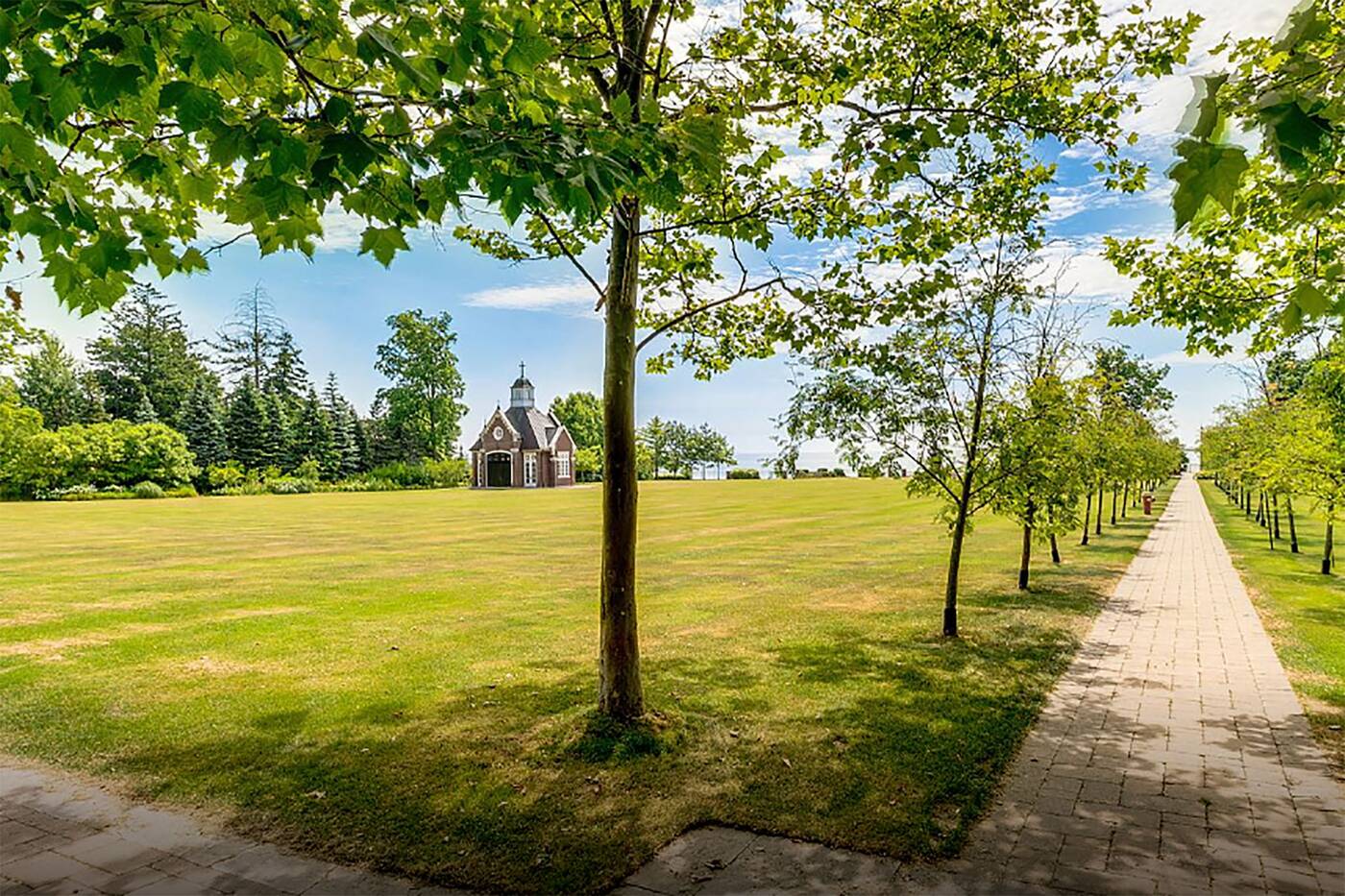 And for the pious, there's a separate 800-square-foot chapel located on the property, complete with pews and crosses.

Though the price for Chelster Hall is already mindblowing, the property was actually more expensive two years ago, when it first went up for sale with ReMax Aboutowne Realty for $65 million.

If prices keep going down yearly, Chelster Hall could theoretically be affordable to the average Canadian in a couple decades or so. Unless Drake decides to invest in another mega-mansion.