Weekend events in Toronto is our guide to events happening this Friday, Saturday and Sunday. Here's what's happening in Toronto this July 18-20, 2014.

TIME Fest
Saturday's diverse one-day line up at Fort York will probably be more fun than Grove was last year, however the loss of Death Grips due to their break up is unfortunate. Grimes, Smith Westerns, Kaytranada, Majical Cloudz and more are still on the bill. TIME took a three year break, so it's not brand new - but a jump from Sound Academy means this fest is going to be a totally different experience. Tip: that experience might include noise bleed from the Honda Indy. Just gimme Indy Rock! Saturday, July 19, 12pm, Fort York Garrison Common (100 Garrison Road).

Honda Indy
Vroom vroom, if we're being totally honest the noise of the Honda Indy is probably closer to what I typically listen to than Time's line up. Cars will race, precious fossil fuels from the depths of the earth will spill out onto the hot pavement, and the music fans at Fort York may or may not grimace with faces as hard as the brave drivers who risk their lives (kinda) for your amusement. As opposed to the brave bikers who risk their lives daily in Toronto to get to work. Fan Friday is free! July 18-20, Exhibition Place (200 Princes' Blvd).

Taste of Thailand
Free VS plane tickets to Asia - it's one of those weekends where your credit limit makes the choice for you. Taste of Thailand, a free outdoor festival celebrating Thai food and culture, takes place at Nathan Phillips Square July 19 and 20 from noon until 8pm. The event will feature free cultural shows, Thai delicacies for sale, cooking demos and carving workshops. LI

Ontario Oyster Festival
The 26th Ontario Oyster Festival at Rodney's (469 King St. West) promises a shuckin' good time, featuring fresh oysters, mussels, and lobster, on Sunday, July 20 from 2pm to 10pm. Tickets ($32) get you admission plus two drink tickets, and one plate of oysters or one hot food item. Additional food and drink tickets are $5. LI

Beaches International Jazz Festival
Having gotten too big for Queen Street East, The Beaches Jazz Festival has expanded in recent years to include events at Woodbine Park. Don't fret - the street festival still shuts down The Beach for three days, but there's now more jazz to go around. The Jazz Festival is one of the more family friendly options on our list, due to the cost (free!), the all-ages atmosphere, and the easy listening of the music on display (no heavy metal or pounding beats here). Best of all the fest is no longer feuding with Drake. Check out our guide to the Beaches Jazz Fest here. July 18-27, Woodbine Park/Queen St. E. (The Beach), free. MF

Airplane Boys
Catch this rising r&b/hip hop duo before they rise as high as the Weeknd and have comedians dressing up as them at shows. Expect Drake-style vocals and a Drake-style play between egoist machismo and sweetie pie vibes from this Scarborough repping group. Sunday, July 20, Mod Club (722 College).

Poor Pilgrim Island Show 7
It's back - Poor Pilgrim presents Doomsquad, IC/JC/VC, Petra Glynt, Carl Didur and more in a relaxing show in hidden spots on the island (a map and tour will guide the way). Hopefully the noise bleed from the Honda Indy won't make it over the waters. Sunday, July 20, 5pm, Toronto Islands, PWYC.

For more music listings, check out our This Week in Music, July Concerts, Summer Concerts, and Summer Music Festivals posts.

Richard Linklater's Boyhood
RIchard Linklater is known for his radical depictions of time passing, most notoriously in his Before trilogy; he could have made each sequel the way most others would: by slathering make-up on his actors to make them appear nine years older. But Linklater prefers to let life do the make-up work, and Boyhood, which chronicles twelve years in the life of a boy named Mason and, yep, took twelve years to film, is his most moving ode to the power of waiting. Set in Texas, it's also a great summer movie, what with the ambience always being summery there, no matter the season. Cineplex Odeon Varsity & VIP Cinemas (55 Bloor Street West). BW

CPFF Days of Summer: Stand By Me coming-of-age flicks
I have watched Stand By Me so many times that I could recite the whole thing from memory, but embedding audio in this post would defeat the purpose of you going to check out this free outdoor screening of the Rob Reiner classic aka the only coming of age film that matters (maybe). Bring a blanket and a small donation. Saturday July 19, 7:30pm, Christie Pits Park (779 Crawford Ave W).

For more dance listings, check out our Top Dance Parties in Toronto in July post.

BIG on Bloor
BIG on Bloor closes the street off to cars between Lansdowne and Dufferin. Last year, the festival, one of Toronto's newer ones, drew about 80,000 visitors. This year, it will be on July 19 and 20, and it will feature 200 local arts and crafts vendors, alongside arts and entertainment showcases. July 19-20, Saturday 1-9pm, Sunday 12-6pm, Bloordale Village. SR

Salsa on St. Clair + Mayoral Dance-Off?
Salsa on St. Clair is probably one of the festivals most fraught with steamy summer possibilities. This year, it's a week long with events across the city, from July 12 to 20. The street festival, which is obviously along St. Clair, this weekend. Most importantly, there are confirmed rumours of a mayoral dance-off. July 19-20, St. Clair Ave West from Winona Dr. to Christie St. SR

Chinatown Festival
On Dundas St. between Spadina and Beverley, and on Huron St. between D'Arcy and Dundas, Chinese culture will festoon the streets from July 19 to 20. One of Toronto's handful of Chinatowns, this neighbourhood is always alive with Chinese culture, but with this festival, the sheer volume of street foods on offer is astounding. You can also catch a dragon winding its way through the area, with lion dances at night. Last year, the festival attracted about 150,000 people, and organizers expect more of the same for 2014. July 19-20, Dundas St. West - Spadina Ave. SR 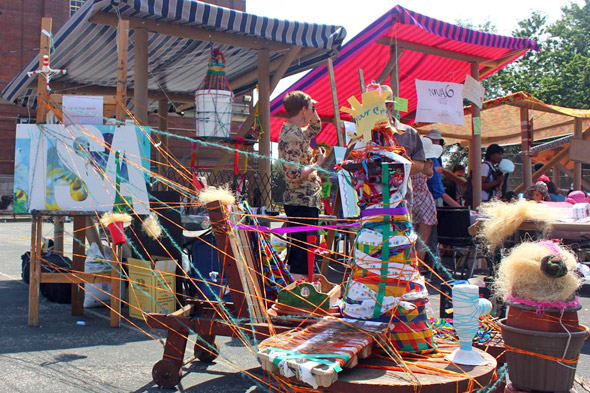 Card Yard at Big on Bloor
As part of Big on Bloor on Brock Street a Senayah Design and PULP joint venture will once again erect pavilions made from recycled cardboard tubes. There will be colourful art creations, poetry, photography, dance, and, according to promoters, actual magic. Unicorn sightings can be tweeted @blogto. Saturday, July 19, Bloordale Village, 12-6pm.

HUSTLEHARD: Art Works
This creative "think tank, but with cocktails" at the Sky Yard wants you to dish the dirty on working as a creative in Toronto, and find new artists to collaborate with. Anupa Mistry hosts and it's $2 to get matched with your future muse, mentor, or friendly rival. Sunday, July 20, 7pm, Sky Yard At The Drake Hotel (1150 Queen St. West).

Live Green Toronto Festival
A true celebration of "all things green" wouldn't be complete without Kermit, but Live Green means it in the earth-saving way. Not that Kermit couldn't share some vital tips on how to keep us from careening into evolutionary oblivion, if only someone would ask. There will be a beer garden, a swap zone, and music on the main stage. Saturday, July 19, 11am-8pm, Yonge- Dundas Square, Yonge Street (Gould to Queen).

Philip Sparks and blogTO Peroni Night
Fashion's noticed that you're into free beer, and this only means good things for you - shop at Philip Sparks on Ossington while drinking free beer and chatting up our lifestyle editor Natalia Manzocco tonight, then stumble out into the street in your new suds - I mean duds - where you'll be indistinguishable from the rest of the Ossington milieu. Friday, July 18, 7-9pm, Philip Sparks (162 Ossington Ave).