Weekend events in Toronto is our guide to events happening this Friday, Saturday and Sunday. Here's what's happening in Toronto this April 18-20, 2014.

420
Ah, yes. Each year, hundreds gather at Yonge-Dundas Square to smoke out the domineering billboards and give peace a chance, while the police will look on and wish the day would end so they could go home and party, Canada-style, themselves. If you're going to brave the crowds, remember not to operate heavy machinery within the next few hours and don't ride the dogs with the pot leaf bandanas, because they are dogs, not dragons. Sunday, April 20, 4:20-ish, Yonge-Dundas Square.

HAIVKY! Spring Revels in the Park on Easter Sunday
Toronto folk collective Kosa Kolektiv, together with a lot of good friends, will host a singing procession that starts at the main gates of Trinity Bellwoods Park and then leads into park for a picnic (BYOsnacks) under a red tent, folk dancing, games and walking formations, Ukrainian and Breton folk dances led by local musicians, Village Voice singing, and games for little sugared-up ankle-biters. If it rains, activities might move into the church basement hall of St. Nicholas Church, 4 Bellwoods Ave. Sunday, April 20, 4pm-dark, Trinity Bellwoods Park.

Girls Just Wanna Have Punk (Friday, Smiling Buddha)
Female-driven punk bands are taking over Smiling Buddha tonight to celebrate the release of international punk compilation This is Not a Test from TO label High Art For The Low Down (HA4TLD). And yes, one of the bands is named Beaver Slaps. Read our preview of the night here. Friday, April 18, 7pm, Smiling Buddha (961 College St.), $10-$12 including a copy of This is Not a Test. All ages.

Folk the Winter
A parade in a FreshCo. parking lot sounds underwhelming, especially from promoters who think mixing "fuck" and "folk" is clever. But just trust us: messing around on the street in West Queen West is more or less time well spent, and this will be a good time if you don't mind some lil' kids hanging around. A surprise guest band is in store - who will it be? Friday, April 18, 7pm, Gladstone Ave. & Queen St. West.

Record Store Day
If you only shop at record stores on RSD, then the industry truly is screwed, but the event is still a fun thing. For music fans and industry peeps, the third Saturday of April is Thy Holy Day of Records, which since 2007 has been a global pep rally for struggling (or are they?) (yes, they are) independent record shops. Mark Sonic Boom's party down - DIANA, Greys, PS I Love You, Unfinished Business, HSY, and The Bicycles are playing for free - then read our full preview of Record Store Day in Toronto here. Saturday, April 19.

Construction
Did you love the Long Winter series so much you betrayed us and used dark forces to make the winter longer, and longer, and longer? You committed a severe error in judgement, because Long Winter will rebrand itself this summer as Construction, an all-ages music series for the hot weather, a.k.a. construction season. The first show is Saturday at Double Double Land (other shows will hop between DDL and Smiling Buddha) with Tasseomancy, Wish, and RLDML. Saturday April 19, Double Double Land (209 Augusta Ave.), PWYC.

Southern Souls Screening
Southern Souls film bands. A lot of bands (well over 1,000), all around Ontario - the list includes names like Austra, Whitehorse, Young Galaxy, and July Talk. This will mark their first screening after five years of hard work. This will also be one of the last shows at Oz (sadface). Read our interview with Southern Souls creator Mitch Fillion here. Saturday, April 19, 9pm, Oz Studios (134 Ossington Ave.), free.

Records Empire
Confession: when I was sixteen, I watched Empire Records over, and over, and over. It gave me this strange idea that working in a record store would be the best thing ever, and I applied to my favourite downtown Winnipeg shop (shout out to Into the Music) with a resume that I airbrushed with green paint so that one of the guys from Love was silhouetted onto it. Needless to say, I looked crazy and I didn't get the job. Celebrate Record Store Day early tonight at this Empire Records-themed comedy show. Friday, April 18, 7pm, Black Swan (154 Danforth Ave).

Studio Warming Party for Papirmass & Paper Pusher
Papirmass and Paper Pusher are two names in Toronto's DIY scene that you need to know. They're inviting you to their brand new studio tonight, so see the magic for yourself. Note: I know you're shy about IRL phone calls, but after 5pm you've got to call the number listed on the page here in order to get inside. Friday, April 18, 4-10pm, #406 196 Spadina Avenue.

AVANT_MUTEK
Montreal's unique MUTEK festival has been delivering impressive programming of electronic music and digital art since 2000. This Saturday, the Montreal fest will present AVANT_MUTEK at 99 Sudbury, together with lauded Toronto promoters breakandenter. Swedish duo Minilogue, who've played MUTEK proper twice, will play a delirious four hour set, and mark their first and last time in Toronto - the duo will take an indefinite hiatus after their current tour. Read our quick interview with MUTEK here. Saturday, April 19, 99 Sudbury.

Mickey Finn
Dance music has made a huge comeback in recent years thanks to the mainstream EDM boom, but that doesn't mean that the old school rave scene has disappeared. If anything, drum 'n' bass seems on the verge of a comeback. See for yourself when UK jungle pioneer Mickey Finn headlines this all-ages Easter Long Weekend party. Sunday, April 20, Opera House (735 Queen St. East), 9pm, $40.

Michel Brault, maitre
If you got a taste of the (sadly) late Michel Brault at Hot Docs last year, you'll no doubt consider TIFF's retrospective of his more fictional work in this week-long retrospective a can't-miss event. A pioneer of the Direct Cinema movement, Brault's eclectic filmography also features some of the most rapturously poetic and scathingly political films in the history of Quebecois cinema, reaching its zenith in 1974 when he won the Best Director prize in Cannes for Les Ordres. April 17-22, TIFF Bell Lightbox (350 King St. West).

Transcendence
Spring's getting into high gear, we had a day this week where shorts were permissible, and studios figure what better way to heat things up than to unleash a $100-million Johnny Depp sci-fi vehicle. I get the logic, I really do - especially in a post-Inception age when anything quasi-future/dream/dystopias appears to be the next opportunity to blow the public's eyeballs and minds. Unfortunately, there's also this thing called a script.

Also opening in theatres this week

For more film events, check out our Top film events this spring post.

Red Bull Race the Place
Ontario Place is opening back up this Saturday for a public urban bike race. Watch as "dozens of seasoned cyclists to chase through the island's abandoned industrial jungle, on a track chock-full of both natural and man-made obstacles." Tires will be flashing mad bling (no? Aw.) while a vendors' village and on-site bike demonstrations amuse those who'd not rather be at the ponies. Learn more here. Saturday, April 19, 10:30am-6:30pm, Ontario Place (995 Lakeshore Blvd. West), free for spectators. 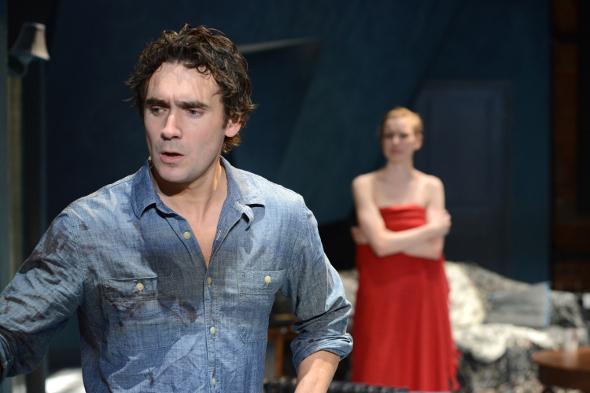 Belleville
Amy Herzog's Belleville is frighteningly intense. So intense, even, that you may find yourself holding your breath and digging fingernails into your seat during one of the many unnerving scenes. Read our review here. Until May 4, Berkeley Street Theatre (26 Berkeley St.).

Beatrice & Virgil
The follow up to his widely celebrated, Booker Award-winning novel Life of Pi, Yann Martel's Beatrice & Virgil is adapted for the stage by Lindsay Cochrane in a collaboration between Factory Theatre and Canada's National Arts Centre. A visit to a taxidermist inspires a journey through the complex story of a donkey and a howler monkey only reached and understood through art, imagination, and the little facts that help sketch the full picture. Given that an adaptation of the visually-stunning Pi was only possible with the most advanced big-screen technology, it will be special to see the celebrated author's work in a smaller, more intimate setting. April 17-May 11, Factory Theatre (125 Bathurst St.), $30-$45.