Weekend events in Toronto is our guide to events happening this Friday, Saturday and Sunday. Here's what's happening in Toronto this March 21-23, 2014.

Fashion Week Closing Party
Rumours have been swirling for the past few weeks that New York mid-2000s super-DJs the Misshapes would be headlining a post-WMCFW party. Turns out that dream is real: The duo (featuring front-row fixture Leigh Lezark) is set to spin at Cube, at a party that will feature "Canadian supermodel (that cannot be named)". (So, y'know, if anyone sees Coco Rocha hanging around this week, you let just let us know.) Check their Facebook event for more info. Saturday, 10pm at CUBE Nightclub.

Midnight MRKT 1yr Anniversary
It's the one year anni for MIDNGHT MRKT (which starts before midnight but lasts into the wee hours or the morning), a unique event that combines DJs (midnight dance party market!) with vintage clothing, Canadiana, street art, and food stuffs. Apparently the organizers just asked themselves "what would Berlin do?" which seems a little suspect -- sure everyone will be speaking English and wearing fancy pants, but you can't drink on the TTC on the way over. Friday, March 21, 2nd Floor Events (461 King St. West), $5. 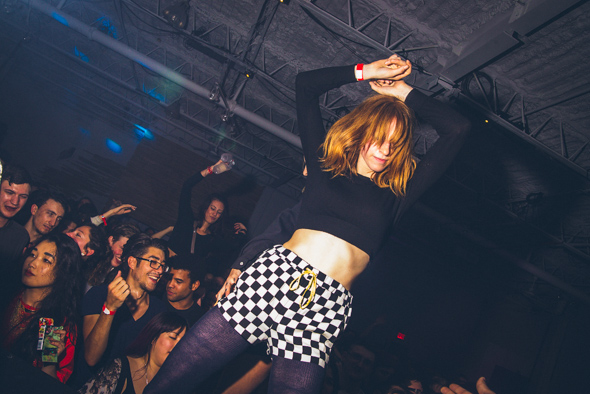 Foundry
Last year Foundry brought together a wide network of underground dance music promoters and scenesters to throw an eclectic mini-festival. This year they return with another talent-stacked lineup. This weekend starts with Red Bull Music Academy's night w/ Efdemin, Cosmin TRG, Nautiluss, and Martin Fazekas, then on Saturday DJ Harvey, Invisible City, and Members Only take over. Note: the fest was moved at the last minute from the Tower Automotive Building to 99 Sudbury. Check out our preview of the fest here. March 14th to April 5, 99 Sudbury St, 10pm, $99.50 series pass, $19.50-$49.50 single nights.

BassWeek
BassWeek kicks off tonight, where a number of TO concert promoters including Toronto Jungle have come together to present two weekends of ear-bleeding, lung-shaking, face-melting acts. Huge names in dubstep and drum and bass are coming across the pond to join local Toronto favourites at some of Toronto's best venues starting next weekend. Read our DJ preview here. March 21-29: full line up here.

Gladstone Karaoke Swan Song
The Gladstone is reluctantly withdrawing their voice from Toronto's karaoke scene, and water damage to the Melody bar is to blame. Read more here. Your last chance to belt it out at Queen & Gladstone is Saturday, March 22.

Marker Starling at Twin Peaks Residency
All month, the Julee Cruise Ships are doing a Twin Peaks residency at Handlebar (playing your fave tracks from David Lynch's unfinished romp in the Black Lodge) joined by five different artists all together over the month, but Saturday is the one to hit if you're a true fan of Twin Peaks' aesthetic. Marker Starling, formerly known as Mantler, is an angel of strange, sincere nightclub kitsch. See below. Saturday, March 22,Handlebar (159 Augusta), PWYC.

Nymphomaniac: Volumes I & II
A two-part, four-hour "sex film" from persona non grata Lars von Trier. The cinema sphere can't honestly say we were surprised. What is surprising, though, is that Nymphomaniac ended up being both a hilarious comedy (Volume I) and a devastating humanist meta-parable that up-converts Tarkovsky iconography into some of the saddest images ever (Volume II). Detailing the sexual history of one promiscuous, self-described nymphomaniac (don't call her a "sex addict"), the film is ultimately about the fundamental nature of storytelling and the ambivalence of empathy. Watch both successively, if you can. TIFF Bell Lightbox (350 King St West) various showtimes.

Outer Space Glitter Face
WORN Fashion Journal's Outer Space Glitter Face launch party is just around the corner! To celebrate their 18th issue, snag a 10 advanced ticket or pay $15 at the door. Wear your best galaxy-themed ensemble, rock one of their sparkly headbands, and get jiggy to all the best oldies for ample fun at The Dovercourt House (805 Dovercourt Rd) Saturday, March 22, 9pm.