Weekend events in Toronto is our guide to events happening this Friday, Saturday and Sunday. Here's what's happening in Toronto this November 22-24, 2013.

Doctor Who 50th Anniversary Celebrations
This weekend is a huge date for Doctor Who fans the world over. It's the 50th birthday of the first episode of what became one the longest running sci-fi television shows in the world. A special episode (or the special episode) of the series is screening Saturday on Space at 2:50pm - but why stay indoors? While Scotiabank Theatre and Yonge Dundas Cineplex sold out tickets weeks ago for in-theatre showings of the premier, The Doctor Who Society is hosting a screening on Saturday at 2:30pm the Elephant and Castle, plus a 5pm post-show mingle that will include ticket giveaways to later screenings. Get ready by reading about Doctor Who's Toronto connection here. Saturday, November 23, The Elephant and Castle (212 King Street West) 2:30pm

The Gentleman's Expo
It's been a good month for guys - Movember means dudes get to bust out their best stache's for a good cause, and now the Gentlemen's Expo, an "innovative consumer show designed for today's modern urban man," is open at the Metro Toronto Convention Centre. Check out their website for a schedule and list of celebrities in attendance. Judging by the naked model holding a Stratocaster on the homepage it looks like if you need a dose over the top camp that might take itself a little too seriously, Gentlemen's Expo has you covered. The good news is a day pass gets you 6 drink tickets, while a weekend pass earns you 18. Friday, November 22 - Sunday, November 24, Metro Toronto Convention Centre (255 Front St W Toronto,) Various times, $30/$60.

Leslieville Wanderlust
Leslieville will host a huge number of activities this weekend for its "Holiday Wanderlust Adventures" from food to street hockey. 35 Participating businesses including restaurants, galleries, and shops will be taking part (and there's a lot of good shopping in Leslieville, don't you know) plus there will be a big draw, a gnome statue scavenger hunt and word puzzle, something called a Wanderlust Cryptogram, wandering raffles, and more. Not sure where the gnome is coming from, but why not? See more about their scheduled events here. Daily until Sunday, November 24th. Queen St. E. between Booth and Vancouver Ave. Times vary.

Winter Magic
The Downtown Yonge BIA's Winter Magic fest is on now until December 1st. Tonight a number restaurants in the neighbourhood will take part in Ice, Wine & Dine by offering sampler menus and signature drinks. There will also be live entertainment, patios for wine tasting, and more. The list of participating establishments and more info can be found here. Then Saturday is Kidzfest, with live entertainment, rides, real My Little Ponys, and more. Yonge core (south down Yonge Street from Grosvenor/Alexander Streets to Richmond Street. Bordered by Bay Street and Victoria Street/Bond Street/Church Street. 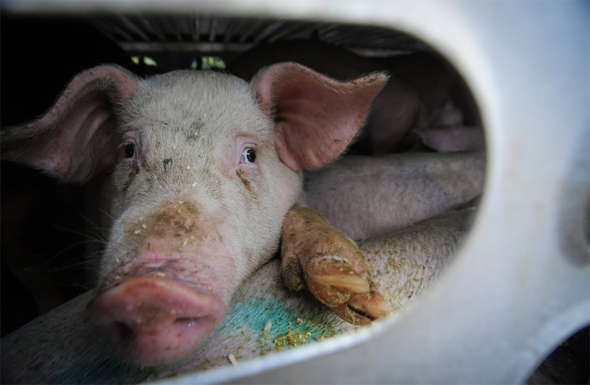 Planet in Focus Film Festival
The 14th annual Planet in Focus Film Festival is on now. A fantastic lineup of program should be a welcome hoist up from the dismal abyss of hopelessness Fordmania has inflicted upon the city of late - the non-profit fest aims to raise awareness about issues from politics to environmental issues through film. Screenings, award ceremonies, and various events will take place all weekend. From nuclear fall out to mischievous crows, read our preview of the fest here. November 21 - 24, TIFF Bell Lightbox and AGO Jackman Hall, various showtimes and prices.

All Toronto's Parties
No, not All Tomorrow's Parties - that's All Toronto's Parties. Tonight the minds of promoters/blogs/labels Weird Canada, Wavelength, Silent Shout, Pleasence Records and Feast in the East are melding for one night only at The Garrison. There will be art installations to gaze at while genre crossing Toronto acts Gay, Young Guv (Fucked Up), Actual Water, Lido Pimienta, Holiday Rambler (Hooded Fang) and Still Boys provide the sound. Friday, Nov 22, The Garrison (1197 Dundas St W), 9pm, $10. 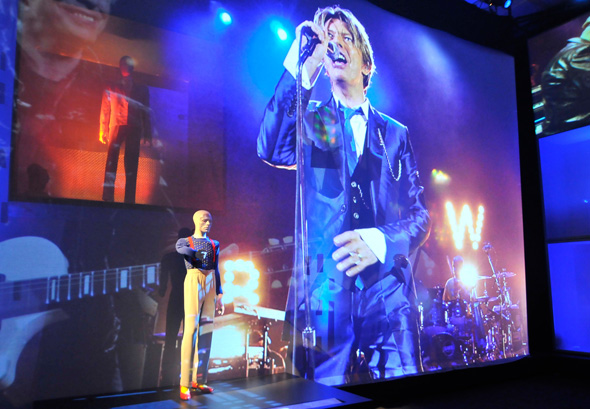 David Bowie Is
If you haven't been to see Ziggy Stardust/The Thin White Duke/etc's life's work of persona-hoarding on display at the AGO, this is your last weekend. Panic! Just kidding - you still have until Wednesday - but if you've been putting off visiting this major exhibit covering five decades of the rockstar's prolific career (over 300 items from Bowie's personal archive are on display over two sprawling floors of costumes, memorabilia, photos, sketches, and sheet music) this is your last chance. Even if you're not a super fan, it's fascinating to wander one's way through this stardust archive. Art Gallery of Ontario (317 Dundas Street West) until Wednesday, November 27th.

Check out our photo gallery here.

Doctor Whom
The Who-tivities (Who-lebrations?) continue Saturday night, and sides will be split - perhaps through time. Truly, this is a show worthy of a childhood favourite. Improv monsters like Anand Rajaram, Matt Baram, and Alastair Forbes, who've done everything from Second City to Straftord, will lead you through an episode that is sure to bring the ruckus. Saturday, November 23, Comedy Bar (945 Bloor St W) 9:30pm & 11pm, $15

Innovation
The National Ballet of Canada's Innovation opens tonight. The new series of shorts will present the words of four Canadian choreographers, including Toronto choreographer Robert Binet's Unearth, a half hour long dance which features an original score by Owen Pallett, whom we chatted with last week about his experiences scoring his first ballet, touring with the Arcade Fire, and moving from Toronto to Montreal. Read our interview with Owen Pallett here. November 22 - 28, Centre for the Performing Arts (145 Queen Street West,) various showtimes and prices.

Needles and Opium
A Robert Lepage production is once again on offer and that's reason enough to celebrate. What's more is that the Canadian Stage production is a contemporary retake on Needles and Opium, which originally premiered in 1991. Lepage revisits the journey of Parisian filmmaker Jean Cocteau who is en route to spend time with jazzman Miles Davis. In true visual brilliance, no doubt, Lepage traces the creative genius' struggle with displacement and drug addiction. Until December 1st, Bluma Appel Theatre (27 Front St E,) 8:00pm/2:00pm, $24-$79. 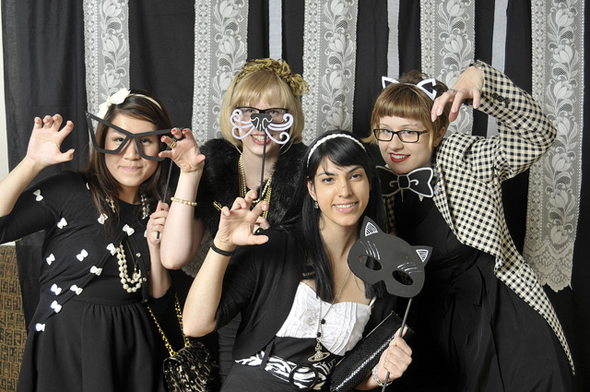 Black Cat Ball
WORN Fashion Journal's popular Black Cat Ball is tomorrow night. They'll be celebrating their 17th issue (and upcoming book). You can snag a $10 advanced ticket or pay $15 at the door to dance like it's not freezing outside until 2am. Wear black and white, rock a pair of cat ears (or dog ears if you want some trouble), and enter one of the many raffles. The Dovercourt House (805 Dovercourt Rd,) Saturday, November 23, 9pm, $15.

Midnight MRKT
Toronto's favourite night market Midnight MRKT is back tonight, this time on King Street West. The usual merger of music, drinks, food, and local retailers (including Toronto's newest vintage shop, Soop Soop) will go until 1am, so you can dance, munch, and shop til late. A list of vendors (and DJs) can be found here. 2nd Floor Events (461 King St. West), 9pm, $5.

LAB Consignment
LAB may have closed its brick-and-mortar location to live as an online boutique, but until Sunday, you can swing by Rac Boutique to peruse the LAB pop-up shop. It's a must visit for hunters of second-hand (and off-priced!) designer fashions. Rac Boutique (78 Ossington Ave), until Sunday November 24.

Startup Weekend Toronto: Maker Edition
OCAD will host a 54 hour exploration of laser cutters, 3D printers and electronics where ticket holders can build prototypes and launch a startup in just one weekend. There will be workshops aplenty and mentors on hand, then it's all or nothing at the Global Startup Battle. You can register as a developer, designer, maker, or non-technical person. Friday, November 22 - Sunday, November 24, OCAD University (100 McCaul Street,) schedule here, tickets $125, after party $10. 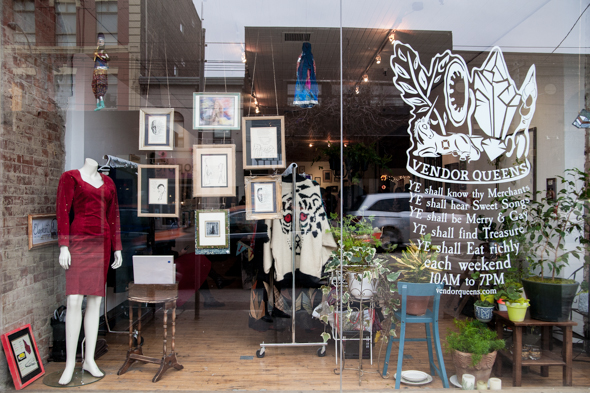 Vendor Queens
At Vendor Queens, the small business is king. The pop-up market, featuring all manner of handmade and vintage goods and about 20 vendors, is taking over part of a condo development centre (the old Thrush Holmes Empire space) at Queen and Dovercourt every weekend until the end of 2013. This Saturday and Sunday look for one of a kind vintage items, handmade packaged food wares, and more. Read our review here. 1093 Queen Street West, Saturday & Sundays until December 29th, 10am - 7PM + three special holiday night markets: Thursday Nov. 21st, Thursday Dec. 12th, Boxing Day.