Weekend events in Toronto is our guide to events happening this Friday, Saturday and Sunday. Here's what's happening in Toronto this March 15-17, 2013.

The Official Budweiser's St. Party's Day
Ontario Place will be mayhem this weekend with the official St. Party's Day two-day festival taking place out on the street. Expecting some 15,000+ attendees, this Budweiser sponsored party will definitely be sloppy with beer flowing freely and plenty of live music and Irish dancers. Heated tents will be set up for those that purchase tickets to drink safely and warmly within secured areas but if you're not into the holiday, our advice is to stay far away from the chaos this festival will create.
Ontario Place, March 16-17, 2013, 11AM $20

St. Patrick's Day Loft Party
St. Patrick's Day lands on a Sunday this year but there's no sense in wasting your Saturday. The Burroughes Loft Building will be hosting the ultimate loft party in honour of the green holiday with the party starting at 2PM and running well into the night. Musical performances will take place throughout the day by DJs like Gray Moonen, James Redi and Kill Them With Color. Acoustic performances will be announced day of, and there will food by Micha Kennedy Fries and The One That Got Away. Tickets are available in advance for $15 but will be $20 at the door.
The Burroughes Building (639 Queen Street West), March 16, 2013, 2PM $15-$20

MIDNIGHT MRKT
The ever-popular MIDNIGHT MRKT is back for an evening of shopping, music and street style food and drink. With music by Johnny Hockin, Lucie Tic and MembersOnly, this Saturday night market transitions into full-on dance party after midnight. Vendors include Shoppalu, Of A Kind, The Anchored Social and Desmond & Beatrice. The $5 entry keeps you in all night so you can grab local finds and stay until last call to drink and dance. Tickets are available at the doors of 2nd Floor Events.
2nd Floor Events (461 King Street West), March 16, 2013, 7PM $5

101 Markets
101 Markets is back for yet another weeky of collectibles, quirks, and curiosities at 3030. With plenty of odds and ends for sale, including collectibles, jewelry, housewares, clothing, vinyl and even cakes, 101 Markets offers a quick browse through vintages on a Sunday morning. The bar's restaurant will be open for brunch and Ontario brews will be served if you're looking for a quieter St. Patrick's Day (without missing out on the beer).
3030 (3030 Dundas Street West), March 17, 2013, 10AM Free

ShakesBeer
Wychwood Barns transforms into a pop-up Shakespearean theatre at ShakesBeer, an informal viewing of all 37 Shakespeare plays in 87 minutes. The abridged version of Elizabethan theatre will involve audiences getting rowdy, shouting at the stage as theatregoers of the 16th century did, as three male players--Matt Drappel
Jeff Hanson and Kevin Ritchie--perform. And it isn't called ShakesBeer for no reason: multiple brewers will be on hand selling their beverages to the crowds. Head up Christie until March 23rd to get rowdy drunk and party like it's 1599.
Artscape Wychwood Barns (601 Christie Street), March 16-23, 2013, 6:30PM $49

SheDoesTheCity Presents: #STAYGOLDEN Spring Breakers
Get messy like spring breakers do with SheDoesTheCity and The Good Kids at Gladstone Hotel this Friday night during their #STAYGOLDEN dance party. Yet another sweaty classic rock party with music by the likes of The Stones, Led Zeppelin and Springsteen playing all night, #STAYGOLDEN is dedicated to the golden era of rock and roll with Steve Rock manning the DJ booth. SDTC's resident photographer Becca Lemire will share the photo love with those with the biggest hair and most acid washed denim. It's only $5 to get in so come out and dance!
Gladstone Hotel (1214 Queen Street West), March 15, 2013, 10PM $5 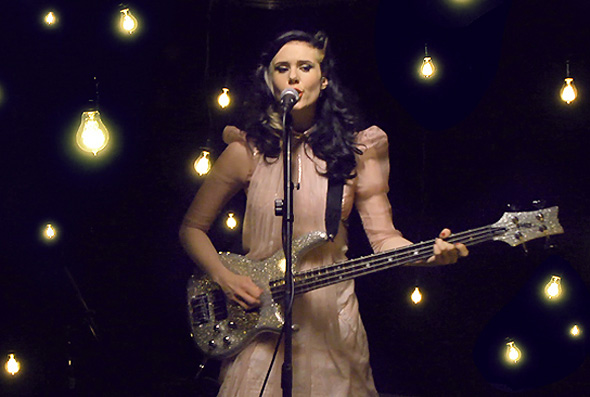 The Big Sound X
It wouldn't be the weekend without one good Motown party and this week it's The Big Sound X at The Great Hall. Playing the best of Motown and soul, the set list will include classics from Wilson Pickett, Irma Thomas, Ronettes, Donny Hathaway, Bill Withers, Otis Redding, and Curtis Mayfield. The party starts early but that doesn't mean it won't go all night. This one is going to be a sweaty good time.
The Great Hall (1087 Queen Street West), March 15, 2013, 9PM $12 before 11PM

Kate Nash
25-year-old singer-songwriter Kate Nash is currently on tour in North America and tonight, she plays the historical Horseshoe Tavern. Touring with her third album, Girl Talk, the British songstress performs her trademark upbeat '60s-inspired pop tunes all night with openers Supercute!, a New York City indie pop group featuring Rachel Trachtenburg. Advance tickets are sold out but there will be some available at the door. Nash hits the stage at 11PM.
The Horseshoe Tavern (370 Queen Street West), March 15, 2013, 9PM $18.50

Bell Free Weekend
The cinema gods are smiling down upon March Breakers this weekend because the TIFF Bell Lightbox is screening their regular schedule completely free. All weekend long, every film--special screening or otherwise--will be completely free. View classics like Stanley Kubrick's 2001: A Space Odyssey and Alfred Hitchock's Vertigo or the latest in contemporary film, like Leviathan. To view the schedule, check out tiff.net/calendar.
TIFF Bell Lightbox (350 King Street West), March 16-17, 2013, All Day, Free

Hip Hop Eh
Hip hop has struggled to create an identity for itself in the Canadian music scene, which is why it took filmmaker Joe Klymkiw five years to document his film. This documentary film opens at Gerrard East's Big Picture Cinema this Friday for a one week run. Featuring interviews with Canadian hip hop artists like Cadence Weapon, Skratch Bastid, Classified, Kardinal Offishall and Buck 65, the film attempts to present an oft dismissed subculture in an understanding and historical light. Hip Hop Eh will remain in theatre until March 21st.
Big Picture Cinema (1035 Gerrard Street East), March 15-21, 2013, 7PM $10

Comedy Hypnosis Show | Hypnorrish
He may not be a stand-up comedian but Paul Norrish typically makes audiences laugh. The hypnotist will take the stage at The Black Swan Tavern this Saturday night, asking for volunteers from the audience who wish to act out scenes while under his influence. If you want to be entranced, show up at 10PM and be ready to raise your hand as soon as volunteers are summoned.
The Black Swan Tavern, Second Floor (154 Danforth Avenue), March 16, 2013, 10PM $10 advance, $15 door

Toronto Storytelling Festival
Gather 'round, children, for the 35th annual Toronto Storytelling Festival is back in session. Traditional and experimental storytellers who have traveled internationally to perform in their art pack a full schedule of story sessions over the course of the next week, targeting audiences of every . Guests like Sandra Shamas, Jay O'Callahan and Matthew Byrne will tell fables, cultural stories and tales befitting specific subcultures at locations like Bata Shoe Museum, Daniels Spectrum and Market Gallery. The stories begin March 16th.
Various venues across the city, March 16-24, 2013, 11AM Free-$20