Weekend events in Toronto is our guide to events happening this Friday, Saturday and Sunday. Here's what's happening in Toronto this January 4-6, 2013.

The Young Novelists
The folks behind the rising folk group Graydon James & The Young Novelists bring their 8-instrument, 6-person band to Lee's Palace this Saturday night for a show featuring friends and openers The Fires Of and Wool & Howl. In an evening of good old roots rock with a contemporary spin, the headliners will perform pieces from their recent EPs, including the acclaimed a small town eulogy as well as songs from Graydon James' double album release from 2009. Tickets are just $7 but are reduced in price if you bring a non-perishable food item (or two!) along with you.
Lee's Palace (529 Bloor Street West), January 5, 2013, 10PM $7 or $5 with non-perishable food item

Outtacontroller with Pink Wine and Non-Stop Girls
Eric Boshart recently gave blogTO readers the rundown on what's new in Toronto music and named Non-Stop Girls as a garage punk band to keep an ear out for. The Girls join powerpop group Pink Wine this Friday night at Parts & Labour as openers for Halifax band, Outtacontroller, who specialize in gritty, frantic, fuck-with-your-head pop punk. Cover is $5, action takes place in The Shop Under Parts & Labour, and this party will definitely not recreate your New Year's Eve hangover.
Parts & Labour (1566 Queen Street West), January 4, 2013, 10PM $5

Connie Kaldor
Connie Kaldor is the reason that Hugh's Room exists, so it's only fitting that she plays the venue during her visit to Toronto. The legendary Saskatchewan-born Juno Award-winning folk artist will perform music from her 14 solo albums in the space dedicated to Hugh Ogilvy Carson, a man who recognized Toronto's need for a folk music venue. The folk singer-songwriter plays two shows this Saturday and Sunday night. Reservations can be made by filling out a request form on the Hugh's Room website or by calling the venue at 416-531-6604.
Hugh's Room (2261 Dundas Street West), January 5-6, 2013, $27.50-$30

Motown Party
751 Lounge at Queen and Bathurst does Motown right with an all-vinyl set being played in the basement space by Brett Millius and Reverend Throwdown, while guest DJ Splattermonkey plays Motown remixes upstairs. Old favourites by the best of Motown like Jackson 5, Marvin Gaye, Smokey Robinson, Stevie Wonder and Diana Ross will be playing all night long with $11 pitchers to give you the liquid courage you'll need to dance. Get there before 12:30PM if you want in; space is limited.
751 Lounge (751 Queen Street West), January 5, 2013, 10PM $5 before midnight, $10 after midnight

Sudden Death
Award-winning playwright Charlotte Corbeil-Coleman fills the void the NHL has left during the lockout in Sudden Death, a play about a hockey legend battling addictions during the most pivotal point of his career. John "Rambo" Kordic is a tough guy at his breaking point--he's a brawler addicted to cocaine and steroids who can't seem to get it together for the biggest night of his life. A dark comedy that explores the unexamined side of our national sport, the play premieres at the Next Stage Festival this Friday night.
Factory Theatre Mainspace (125, Bathurst Street), January 4, 2013, 9:15PM $12 early show, $15 late show

For more theatre listings, check out our Next Stage Theatre Festival Preview post.

Audit Ride of Sherbourne Street Protected Bike Lanes
The first protected bike lane in Toronto sits on Sherbourne Street and is up for audit in 2013. Organizers of the audit invite all cycling-enthused Torontonians to join them on their ride to gather feedback on the rolled curb design north of Gerrard and the raised track design that heads south. The analysis is designed to help protect bike lanes in Toronto and measure their impact on riders and traffic flow; so the more participants, the better for the city! Cyclists will meet at the corner of Bloor East and Sherbourne at 11:30AM to begin their ride.
Bloor Street and Sherbourne Street, January 5, 2013, 11:30AM Free 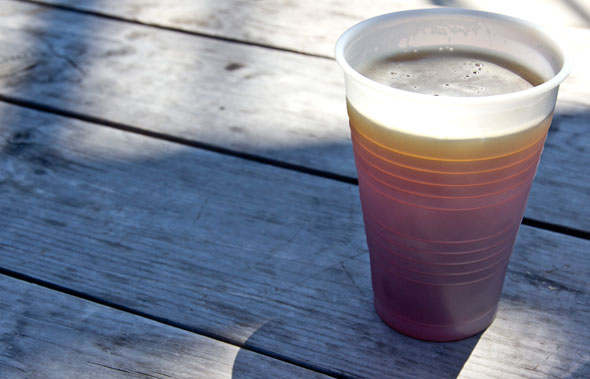 Brewer's Backyard: Brew Year's Day
Six craft breweries showcase the best in winter ales at Brewer's Backyard: Brew Year's Day at the Brick Works this Sunday afternoon. Imperial stouts, baltic porters, oak-aged ales, and black IPAs from brewers like Indie Alehouse, Amsterdam, and Great Lakes will be up for tasting inside the Young Welcome Centre. Big E's Grinds will be serving Hawaiian street food and the outdoor skating rink will be open at this free, all-ages event that welcomes old man winter with a brew. Note that food and drink are for purchase only.
Evergreen Brick Works (550 Bayview Avenue), January 6, 2013, 12PM Free

Feast In The East 21: Yacht Club + Digits + Beta Frontiers + Miss Elizabeth
The monthly east ender's carnival of sorts returns with new bands, a new chef, and a new installation for 2013. Dan Bedard will be cooking up a free dinner while Adrian Dilena will preview his latest artwork Environs. The night will include performances by Yacht Club (the side project of Fucked Up's Ben Cook), Berlin electropop star Digits, Beta Frontiers and Miss Elizabeth. The event is all ages with advance tickets available at Circus Books & Music, The Film Buff, Grasshopper Records, and Soundscapes.
Polyhaus (388 Carlaw Avenue), January 4, 2013, 9PM $7 advance, $10 door

7th Really Really Free Market
Winter gear is up for grabs at the 7th Really Really Free Market, which once again takes place in Campbell Park this Saturday morning. This month's market will be for any winter clothing or items you need to give up--whether it's your old hockey gear, a sled or last year's parka--or desire. The rules are the same as always: All items must be submitted by 5PM and there is to be no trading, bartering or exchange of money. All leftover items will be donated to a local charity.
Campbell Park (Campbell Avenue, between Wallace Avenue and Antler Street), January 5, 2013, 10AM Free

Opening Reception: 2nd Annual Emergent Artists Exhibition
With a new year marks the return of O'Born Contemporary's 2nd Annual Emergent Artists Exhibition, which showcases upcoming local talents of mixed mediums. This show will display works that signify the cycle of a new generation of artists that are gaining traction in the city. Jeff Bierk, Lindsay Lauckner, Benjamin Freedman, and Kyle Brohman have all submitted their pieces for this coming-of-age compilation exhibit, which opens publicly on Saturday with a special preview at the Friday night opening reception.
O'Born Contemporary (131 Ossington Avenue), January 4, 2013, 6PM Free

Prom Night
Toronto's best-kept secret cinema starts out its 2013 programming with a 1980s Canadian teen slasher film that is equal parts camp and horror. Prom Night stars Jamie Lee Curtis and Leslie Nielsen in a story about a masked killer seeking murderous revenge at a high school prom. This Paul Lynch directed film will be a fun one to watch on the big screen in the Palace's dank basement particularly if you attended the local high school where the film was shot. Tickets are a reasonable $5 for a Friday night out at the movies.
Trash Palace (89-B Niagara Street), January 4, 2013, 8:30PM $5

Toronto Strip Spelling Bee
It's a known fact that strip spelling bees are hilarious--right? Buddies in Bad Times Theatre hosts a version of strip poker based solely on third grade spelling test scores where people deluded about their abilities (and maybe more) will get onstage to compete for a spelling champion title. Prizes for the winner and Best Striptease will be given out to one of the ten participants. Entrance is free for competitors brave enough to spell (and strip) in public! Play nice--no photos and no booing rules are strictly adhered to.
Buddies in Bad Times Theatre (12 Alexander Street), January 4, 2013, 10:30PM $10

For more comedy listings, check out our This Week in Comedy post

Photo by Ian Muttoo in the blogTO Flickr pool