Weekend events in Toronto is our guide to events happening this Friday, Saturday and Sunday. Here's what's happening in Toronto this December 7-9, 2012.

Unsilent Night Toronto 2012
A cloud of sound envelops the city this Saturday night during Unsilent Night, the cult holiday event that sees citizens of Toronto participating in an outdoor sound sculpture. A choir of boom boxes, cassette players and iPhones will parade from Dufferin Grove Park to Trinity Bellwoods, playing a downloaded soundtrack. Participants will meet at Dufferin Grove at 7PM where they will be instructed when to hit play. Find the soundtrack at www.unsilentnight.com/download.html.
Dufferin Street and Dufferin Park Avenue, December 8, 2012, 7PM Free

GLDSTK Standard Holiday Pop-Up Market
Made in Canada and proud of it, Gouldscttock Standard Supply Co. opens the doors on their holiday pop-up market on Friday night. Open for the weekend, the shop will offer the quality garments Gouldscttock is known for, with high-end fabrics in cut and sew fashion. Accessories will also be available at the pop-up but it is important to note that due to short run production, stock is limited. Pop-in while there's still stock!
109OZ (109 Ossington Avenue, 2nd floor), December 7-9, 2012, 5PM Friday, 10AM Saturday, 11AM Sunday Free

Holiday Art Market at Artscape Wychwood Barns
Opening a holiday-themed marketplace in their own personal mecca, artisans bring their one-of-a-kind items to Artscape Wychwood Barns this Sunday for a one-day only sale. The covered barn will become a festive atmosphere with a large Christmas tree and seasonal cafĂŠ serving hot drinks for customers to browse the 56 exhibitors of jewelry, clothing, homewares, art and various other tchotchkes. The market will be short but sweet so waste no time getting there this Sunday.
Artscape Wychwood Barns (601 Christie Street), December 9, 2012, 12PM Free

Accessory Swap & Shop
Looking to change out your jewelry for the season? Yorkville's The Black Box Boutique hosts a swap & shop just for accessories. Guests are invited to bring their pre-loved jewelry to the party, swapping them out for new things to love from other attendees. Regular merchandise will be available for sale as always, with featured vendors Neha Varma Handbags, Pinky's Nails and LightFound on display in-store. All money raised from the $5 entrance fee will go toward the YWCA.
The Black Box Boutique (106 Yorkville Avenue), December 7, 2012, 5PM $5

AZ
Rapper, member of The Firm and frequent Nas collaborator AZ comes to Toronto this Friday night to perform at The Great Hall with Tona & DJ Big Jacks. Not yet a household name despite his 2003 Grammy nomination, this Brooklyn rapper has released 8 studio albums with his ninth, Doe or Die 2, in the works. Referred to by some as the most talented lyricist of all time, tonight's performance is sure to showcase what the world has been missing. Tickets to the concert are available through Eventbrite.
The Great Hall (1087 Queen Street West), December 7, 2012, 9PM $25

Hoodie Allen
OK, so we're suckers for a good rapper name--Hoodie Allen, a New York-based rapper and music nerd, lands at the Phoenix tonight for his headlining show. With his diverse music that mixes hip hop with indie music and pop samples, the 24-year-old mixtape master and former Google employee (for real) will play tracks from his 2 EPs and 3 mixtapes, all released within the past 3 years. Tickets for the show are available through Ticketmaster, Union Events, Rotate This, Soundscapes and Play De Record.
Phoenix Concert Theatre (410 Sherbourne Street), December 7, 2012, 8PM $22

For more music listings, check out our Hot Ticket post. 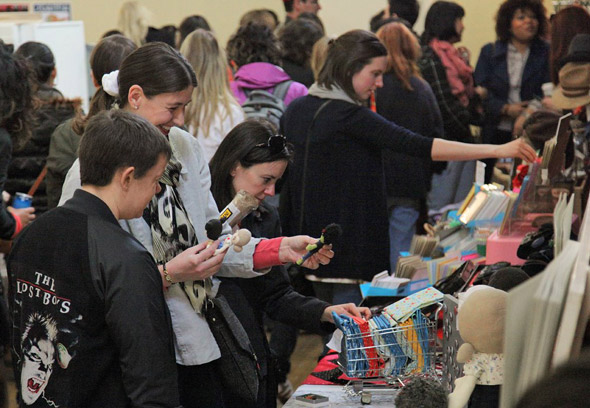 City of Craft 2012
Crafters invade Queen and Dovercourt this weekend for unique, handmade goods at City of Craft 2012, opening at the Theatre Centre on Saturday morning. Local vendors like Coriander Girl, Hot Pop Factory, Ursa Minor, Caitlyn Murphy, and Worn Fashion Journal will be selling everything from independent magazines to clothing to pots. Though we're pretty sure this is the cutest craft fair of all, be sure to check out our recap of the many upcoming holiday craft shows in the city.
The Theatre Centre (1087, 1093 & 1095 Queen Street West), December 8-9, 2012, 11AM $2

Nacho Mama's Craft Show
This is not your mama's craft show: Nacho Mama's takes place in a bar with the city's best nachos (topical) while selling the arts & crafts of local businesses like holly knitlightly, Curious Oddities, Charlotte and Stewart, and Brazen Razor. This crafty bunch sets up shop Saturday morning at Sneaky Dee's, offering beer, brunch and cool finds while raising money through their raffle prize pack for Sketch, a community arts initiative that engages young people to participate in the arts. Bring your mama, grab some nachos and check out the crafts until 5PM Saturday.
Sneaky Dee's (431 College Street), December 8, 2012, 11AM Free

Holiday Sweets Tour
Kensington gets buttery sweet this Sunday with the Holiday Sweets Tour, a magical guided walk through the market to munch on chocolates, candy canes, and other sweets at five of the neighbourhood's specialty shops. Holiday history will be covered while introducing those on the tour to the best sweet shops and bakeries in the market with free samples at each location. The walk begins at Ding Dong Bakery on Spadina, where guests will meet their guide from Tasty Tours. Bookings are available through Tasty Tour's website.
Ding Dong Bakery (321 Spadina Avenue), December 9, 2012, 11:30AM $30

The Snowman
Animated Christmas classic The Snowman get the Toronto Symphony Orchestra treatment in its Roy Thomson Hall debut this Sunday night. The 1982 film will be screened with live accompaniment by the TSO, headed by conductor Stuart Chafetz. In addition to Howard Blake's original score, the Cawthra Park Chamber Choir and
The Holiday Dancers will complete the live performance of Dianne Jackson and Jimmy T. Murakami's film. Tickets are available through the TSO website.
Roy Thomson Hall (60 Simcoe Street), December 9, 2012, 3PM $20-$65 adult, $16.50-$33 child