Weekend events in Toronto is our guide to events happening this Friday, Saturday and Sunday. Here's what's happening in Toronto this November 23-25, 2012.

Annex Mistletoe Kissing Stations
Let's get romantic, Toronto! Bloor Street will be decorated with mistletoe from Spadina to Bathurst beginning this Saturday so be sure to bring along the one you love to steal a kiss. The mistletoe will remain in the designated Annex kissing stations until January 3rd. Look for the signs and try to keep the PDA to a minimum for all our sakes.
Bloor Street (between Spadina Avenue and Bathurst Street), November 24, 2012, Free

Winterfest
The weather outside is not yet frightful, but the Toronto Waterfront BIA is making the Queen's Quay Terminal festive nonetheless. Setting up shop--as in Santa's workshop--this Saturday, children are invited to meet the grandfather of the North Pole and participate in arts and crafts workshops with the elves. Winterfest continues every Saturday and Sunday until December 16th.
Queen's Quay Terminal (207 Queen's Quay West), November 24, 2012, 12PM Free

WORN Fashion Journal Issue 13 Launch: The Black Cat Ball
With the release of lucky issue number 13, WORN Fashion Journal is throwing a ball! Guests are encouraged to dress in black and white and participate in the raffle while oldies play. Drinks will be sold so partygoers can gather the courage to take photos in the famous (infamous?) WORN photo booth after sitting down for cat face with a face-painting artist. Cover includes a copy of the magazine and a good time at this Saturday night Black Cat Ball.
Dovercourt House (805 Dovercourt Road), November 24, 2012, 9PM $12 door, $10 advance

For more fashion listings, check out our This Week in Fashion post

Smashing Event
Saturdays are for getting smashed, which is why Estonian/NYC performance group Non Grata will be destroy cars in a performance art piece on Sterling Road on Saturday afternoon. Taking place in the empty lot next to 163 Sterling, cars will be smashed in this controversial piece co-presented with the Dundas West store and gallery SMASH. Local artists like Noise Band, Wesley Rickert, Kathleen Reichelt, Jubal Brown and more will participate in the destruction, all for the sake of art. An indoor event will take place afterwards at The Theatre Centre Pop Up (1095 Queen Street West) at 7PM, followed by a reception.
Lot next to 163 Sterling Road, November 24, 2012, 3PM Free

FunnyMan Fridays Live Comedy Show
A group of men who think they're funny (not totally uncommon) band together for a Friday night of stand-up comedy in Richmond Hill (somewhat more uncommon). Fellow Canadian talents Jack Dani, Lars Classington, Matt O'Brien and Anthony Ciardulli join headliner Jeff Leeson in an evening that is all about wise guys. Marc-Anthony Sinagoga hosts this second show of the FunnyMan series, now in its second season. Tickets are available online and at the door.
Richmond Hill Centre for Performing Arts (10268 Yonge Street), November 23, 2012, 8PM $15

For more comedy listings, check out our This Week in Comedy post

Metric
Metric has been releasing full-length albums for nearly a decade and are currently on tour with their fifth studio album, Synthetica, out on their independent label this year. The new wave indie rockers play the ACC this Saturday night and tickets are surprisingly reasonable, considering the band's current reach. The band will play their "classics" along with the new stuff that has already experienced considerable radio play in Canada. But is there any better reason to go than to see Canadian darling Emily Haines tear up an entire arena of fans? Didn't think so.
Air Canada Centre (50 Bay Street), November 24, 2012, 8PM $49.50-$64.50

The Who
Let's talk about real classics for a second--British hard rock band The Who is back on tour, stopping in Toronto on Friday night for a show at the ACC. The band has been active since the mid-60s, having recorded 11 studio albums (1969's rock opera soundtrack Tommy arguably being their most popular). On the 2012 tour, however, the band is scheduled for 35 dates in which 1973's Quadrophenia album will be played its entirety. Tickets to the show range in price but if you aren't a die-hard fan, stick to the semi-affordable nosebleeds to save yourself some cash.
Air Canada Centre (500 Bay Street), November 23, 2012, 7:30PM $53.25-$143.25

Cuff the Duke & Jenn Grant
Oshawa country folk five-piece Cuff the Duke join ethereal folk singer-songwriter Jenn Grant to play the Winter Garden Theatre this Saturday night. Cuff the Duke, whose former members include The Sadies' Paul Aucoin, are on tour with their recent album, Union, released in October of this year on Paper Bag Records. Grant joins the Ontario leg of the tour with several successes already under her belt (she has collaborated with Canadian acts like Ron Sexsmith and Buck 65). Tickets are available through Ticketmaster.
Winter Garden Theatre (189 Yonge Street), November 24, 2012, 8PM $25-$50

For more music listings, check out our Hot Ticket and November Concerts posts 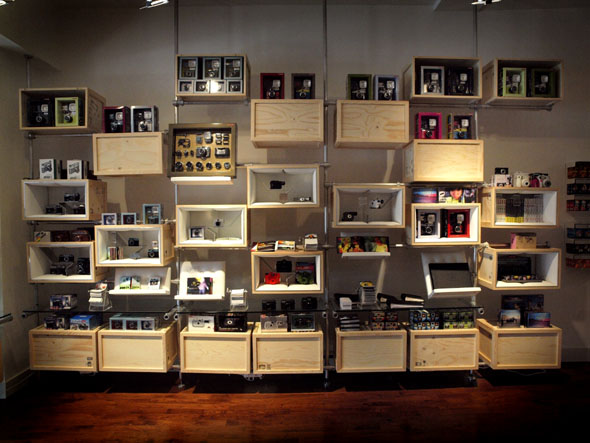 20 Years of Lomography
Twos can be terrible, except when it comes to parties. The Lomography Gallery Store celebrates its 2nd year anniversary, nestled in at Queen and Bathurst, while throwing a party in recognition of 20 years of the art of lomography photography. The store will house performances by bands, music by DJs and, yes, there will be cake. Break out your lomography camera and bring your friends who are down with the analog way of doing things.
Lomography Gallery Store (536 Queen Street West), November 23, 2012, 7PM Free

Film Fatale: Blood Simple
The Coen Bros. directorial debut Blood Simple, a 1984 film about misunderstandings, deceit and extramarital affairs, screens at the Dominion on Queen this Friday evening. Presented by the Toronto Film Noir Syndicate, the film stars Coen-favourite Frances McDormand along with John Getz and Dan Hedaya. Tickets can be purchased at the door to the back room of the Dominion and will cover the price of the feature along with several shorts playing beforehand.
Dominion on Queen, Back Room (500 Queen Street East), November 23, 2012, 8PM $5

For more film listings, check out our This Week in Film post

Tagged and It's Complicated
The perils of dating in a time of social media are explored in Tagged and It's Complicated, a musical about Tim and Katherine, two lonely young people in the throes of quarter-life crises, who turn to social networking and dating sites to find mates. Set in Toronto, the play focuses on the hilarious shortcomings of the online dating world and the e-personas that we create to make social media bearable. All performances take place at The Palmerston Theatre with tickets on sale at Out of Reach Theatre.
The Palmerston Theatre (560 Palmerston Avenue), November 24, 2012, 8PM $15 door, $12 advance

For more theatre listings, check out our This Week in Theatre post

Final Notice Zine Fair
With XPACE Cultural Centre closing the doors on its current location soon, they are throwing a Final Notice Zine Fair to shut the place down properly. Over 30 vendors will be selling their small press publications--from comics to zines to poetry books--with handmade goods like t-shirts, notebooks and posters also available. Absolutely Free is scheduled to perform along with DJ sets by Mama Knows and Dirty Blue Gene. Take notice of the final zine fair within XPACE before it's gone!
XPACE Cultural Centre (58 Ossington Avenue), November 24, 2012, 12PM Free

Star Trek Day Toronto
This one's for the Trekkies: Star Trek Day Toronto kicks off its second annual event by showcasing fan-created content surrounding themes and characters from Gene Roddenberry's franchise. Participate in Star Trek Jeopardy to show off your knowledge of the Klingon dictionary (or the Star Trek Encyclopedia, you know have a copy) and play card and board games based on the various series. Star Trek collecitbles and toys will also be for sale so be sure to stop by the vendor booths for souvenirs. Tickets are available to Star Trek Day Toronto through eventbrite.
Tranzac Club (292 Brunswick Avenue), November 24, 2012, 7PM $18 door, $15 presale