Weekend events in Toronto is our guide to events happening this Friday, Saturday and Sunday. Here's what's happening in Toronto this October 19-21, 2012.

10th Annual Toronto Zombie Walk
The dead walk again this Saturday when hundreds gather at Nathan Phillips Square to participate in Toronto's 10th annual Zombie Walk. Circling City Hall and heading down Queen West, the festivities begin in Nathan Phillips with vendors and bands as well as appearances by Night of the Living Dead's John Russo and Russ Streiner. The first 100 registered zombies to visit the official booth at Nathan Phillips will receive a copy of Alice in Zombieland. Check out our full guide to the Zombie Walk with ideas on where to purchase costumes for the event.
Nathan Phillips Square (100 Queen Street West), October 20, 2012, 12PM Free

Brian Posehn: Dark Comedy Fest Preview
Brian Posehn may be better known as that guy from "Tim and Eric Awesome Show, Great Job!" and "The Sarah Silverman Program" but this awkward, self-professed nerd's film and stand-up comedy career has taken off in recent years. Posehn has appeared in the Just For Laughs 2011 Festival and more recently in Judd Apatow's Five-Year Engagement but this Friday, he'll be doing stand-up at the Annex Wreck Room in his return to Toronto to perform during The Dark Comedy Festival. Mike Rita hosts the event with an appearance by Rob Mailloux. Tickets are available on TicketWeb.
Annex Wreck Room (794 Bathurst Street), October 19, 2012, 8PM $20

SBTRKT
Musician and producer SBTRKT prefers to let his music speak for him but he can't hide behind anonymity this Saturday night. Playing a DJ set at Wrongbar, SBTRKT will play his usual blend of electronic, house and post-dubstep music for a 19+ crowd along with some special, yet-to-be-revealed guests. Tickets can be purchased through the usual places--TicketWeb, Rotate This and Soundscapes--but will likely sell out fast.
Wrongbar (1279 Queen Street West), October 20, 2012, 10PM $20

For more music listings, check out our Hot Ticket and October concerts posts.

The Rocky Horror Show
The cult horror classic The Rocky Horror Show returns to Lower Ossington for its 5th year, once again in time for Halloween. Playing only 16 shows from this weekend until November 3rd, with a special sing-a-long night on October 25th, the performance sells out each year due to the overwhelming popularity of Janet, Brad and the bizarre people they encounter when their car breaks down in an isolated part of town. We know you have your Dr. Frank-N-Furter costume handy from last year's performance so dress up and head down to Ossington Avenue this Friday to catch the opening show.
Lower Ossington Theatre (100A Ossington Avenue), October 19-November 3, 2012, 8PM $35-$45

Canzine 2012 Symposium
Broken Pencil's one-day conference on zine design, creation and output is a chance for content producers in the indie arts community to share their knowledge and skills with one another and learn about enhancing their publications. Workshops, presentations, a zine swap and a vegan lunch are all included in the full day pass price ($38) but individual sessions are also available, like the Primp Your Zine workshop, lead by Lisa MacDonald, Ian Sullivan and Elija Montgomery ($12). Break pencils and learn how to turn your zine hobby from backbreaking work into a business at Canzine.
918 Bathurst Centre for Culture, Arts, Media & Education (918 Bathurst Street), October 20, 2012, 7AM $12-$38 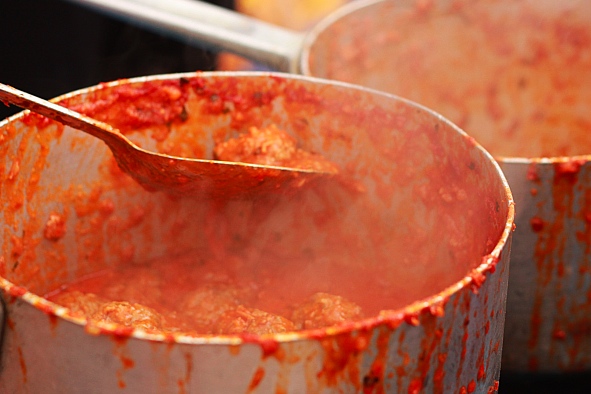 Soupstock
A little bit of protest mixed with a lot of soup is the idea behind Soupstock, a culinary event that will see over 200 chefs slaving over stoves to raise awareness and stop the controversial Highlands Mega-Quarry. A celebration of clean water and good food put on by the David Suzuki Foundation and Canadian Chefs' Congress, Soupstock will have hundreds of flavours of soups to try. Join the protestors in Woodbine Park on a cold day with a warm bowl of soup to learn more about their cause and get involved in the community.
Woodbine Park (Queen Street East and Coxwell Avenue), October 21, 2012, 11AM Free

For more food events this week, check out our This Week in Food post.

Riverside WALKfest
Explore the Riverside neighbourhood by joining in on theme walks at the 4th annual WALKfest. Six different types of walks with expert leaders will take you through the Queen East neighbourhood, exploring places like chocolate shops and bakeries (The Culinary Walk), galleries (The Art Walk) and even pet-friendly businesses and parks (The Dog Walk). All walks are free and a new theme starts each hour, on the hour, at 756 Queen Street East. Pre-register at riversidewalks.eventbright.com for free.
Riverside Toronto (756 Queen Street East), October 20, 2012, 10AM Free

Movies Made By Other People
Toronto film collective Made By Other People gathers at Cinecycle for a free and friendly screening of local short films, documentaries and music videos made through the group's network. Movies Made By Other People is an evening for indie filmmakers to gather, chat, and enjoy the products of their labour while having some cheap booze. Filmmakers such as Mitch Arend, Nathanael Chadwick and Yaz Rabadi will screen a variety of works in the second instalment of the series. All are welcome, just look for the old coach house down the lane of 129 Spadina.
Cinecycle (129 Spadina Avenue), October 19, 2012, 8PM Free

A L O N E together
Outside the Lines art collective throws a group show, opening at Triangle Lofts Gallery this Friday. Featuring 8 artists working in differing forms of media under the same ideals, artists like painters Mark Kellett and Laura Culic, and mixed media painter Jennifer Lawton present their works alone as independent artists yet together as critics and supporters of one another's work within the group. Sharing interests and philosophies that direct a unifying vision in the show, A L O N E together opens tonight with an artist-attended ceremony at 5PM. The show runs until October 25th.
Triangle Lofts Gallery (38 Abell Street), October 19, 2012, 11AM Free

The National Women's Show
Mitt Romney may have binders but the Metro Toronto Convention Centre will be filled with real, live women this weekend as vendors step out to directly tackle a broad market (pun seriously not intended). 450 exhibitors will offer food, wellness, beauty, travel, and entertainment services and goods targeting women while workshops and shows take place throughout the venue. Tickets are available through the official National Women's Show website. The show runs until Sunday.
Metro Toronto Convention Centre, South Building (222 Bremner Boulevard), October 19-21, 2012, 12PM $15