Weekend events in Toronto is our guide to events happening this Friday, Saturday and Sunday. Here's what's happening in Toronto this October 12-14, 2012.

ROM Friday Night Live
Friday night dance parties at the museum return for the fall season when the ROM reboots Friday Night Live for the 20- and 30-something set who like to drink and look at dinosaurs. This year, the ROM has brought plenty of Toronto-based craft beer brewers on board to sell at the event, while DJ's TIGERBLOOD and Simon Jain provide the music. Fidel Gastro will be filming his new reality show "Rebel Without A Kitchen" on-site and there will also be a sneak peek at the Planet in Focus Film Festival with screenings happening throughout the ROM. This is a 19+ event that takes place every Friday until November 30th.
Royal Ontario Museum (100 Queen's Park), October 12, 2012, 7PM $10 adult, $9 student/senior

Drake Fall Market
The Drake CafĂŠ patio transforms into a market, bake sale venue, and trading post this Saturday for their annual Fall Market. Handicrafts and jewelry made by local designers and artisans like Scarf Faces and Baby Elephant Designs will be for sale, while a freecycle table will offer gently used Drake products for free on a first come, first served basis. There will also be baked goods like mini doughnuts and pies, and, of course, good people stopping by between 10am and 4pm, rain or shine. Visit the Drake this Saturday to chat with your neighbours.
The Drake Hotel (1150 Queen Street West), October 13, 2012, 10AM Free

Toronto Garlic Festival
Insert bad breath joke here--the Toronto Garlic Festival opens this weekend with chefs, garlic scholars, and growers exhibiting dishes, drinks, books and lectures, all about one stinky little plant. Taking place at the Evergreen Brick Works this Saturday and Sunday, scientific presentations about the relationship between Dracula and garlic, and the folklore behind garlic will be highlights of the event. If you can't bike, walk or drive, there is a shuttle leaving Broadview station every ten minutes while the festival is open.
Evergreen Brick Works (550 Bayview Avenue), October 13-14, 2012, Saturday beginning at 1PM, Sunday beginning at 9AM $10

True Stories, Made Up Plays
Hand-picked storytellers have their true stories turned into short pieces of theatre at the Black Swan Tavern this Saturday night in True Stories, Made Up Plays. Improv troupes People and Chairs, Jersey Laur, and House Team Corgi In The Forest take on real-life stories from three individuals, and manipulate the tales into short dramas, comedies, and maybe even tragedies. Diana Bailey will do a stand-up set to open this theatre of imagination and get the crowd excited for what promises to be a hilarious evening.
Black Swan Tavern (154 Danforth Avenue), October 13, 2012, 10PM Free

One Night Stand
69 Vintage invites fashion lovers to revisit some old flames at One Night Stand, a vintage market and party taking place this Friday evening at 109OZ. Boutiques like Miracle Thieves (249 Crawford Street), Bridge and Bardot (1138 Dundas Street West), and Magwood (1418 Dundas Street West) come together to sell goods alongside some independents. Drinks and dancing happen later in the evening, so get an early start on shopping at 5PM, and stick around for the party, which will last as long as the customers do.
109OZ (109 Ossington Avenue), October 12, 2012, 5PM Free

PRESENCE: The Invisible Portrait Book Launch
In the search for celebrity, photographer Chris Buck keeps celebrity hidden. Launching in Canada this Friday night at TYPE on Queen, PRESENCE is Buck's latest book of celebrity portraits in which all celebrities are within the frame, but are kept unseen. Buck's take on portraiture is to learn about the person being photographed by capturing the environment around that person. The photographer will sign copies of the book until 8PM.
TYPE Books (883 Queen Street West), October 12, 2012, 6PM Free

Katrina Onstad and Marvin Etzione
Music and literature collide as Toronto author Katrina Onstad (longlisted for the Giller Prize for her novel Everybody Has Everything) will do a reading and book-signing, supported by the musical talents of Marvin Etzione, with Alice Kos and Everett LaRoi. The friendship between the writer and the musician began when Onstad used a quote from one of his songs in her book, and the afternoon promises to unite these two art forms in memorable ways.
Soundscapes (572 College St.), October 13, 2012, 2PM 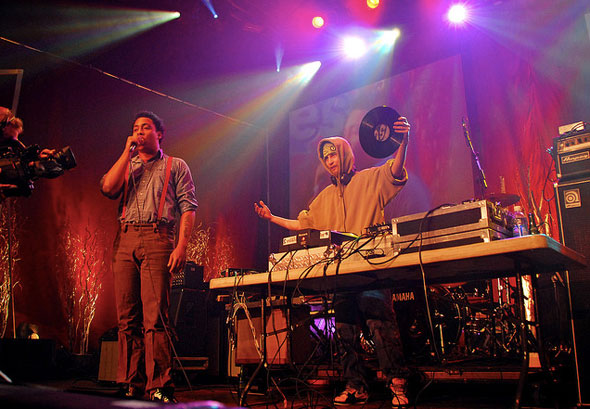 Cadence Weapon
Cadence Weapon, the Polaris Prize-nominated hip-hop artist, seems to be popping up everywhere since his performance at the awards gala, and this Friday, he headlines at Wrongbar. Following a tour of summer festivals in the UK and North America, Cadence is joined by special guest Digits, a local electropop musician who will take the stage with the rapper at tonight's show. The show is 19+ and tickets are available through Ticketmaster, Rotate This and Soundscapes.
Wrongbar (1279 Queen Street West), October 12, 2012, 7PM $12

For more music listings, check out our Hot Ticket and October concerts posts.

Pink Films 2.0
The Shinsedai Cinema Festival showcases the best of Japanese indie films for Toronto audiences, and to honour the many great Japanese directors who spawned from the genre (i.e. Kurosawa, Takita), the festival presents a double bill evening of pink films. Back-to-back screenings of Yukio Kitazawa's sci-fi comedy Deep Contact and Daisuke Goto's romcom Blind Love will take place at The Projection Booth Metro this Friday night with performances by Red Herring Burlesque to complete this evening of softcore erotica. Tickets are available at the door with a discount in pink film-inspired outfits. Naturally, this one is for the 19+ crowd.
The Projection Booth Metro (677 Bloor Street West), October 12, 2012, 9PM $10

Big City Improv Festival
Though the Big City Improv Festival doesn't officially kick off until October 15th, a special opening preview will take place all weekend long at Comedy Bar. A prelude to the 75 comedy acts that will perform throughout the weeklong festival, Jerry Minor (Community) and Steve Little (Eastbound & Down) start the show with two improv performances each night, from Friday through Sunday. Joining them onstage are local comedians like Bob Banks, Adam Cawley and many others. Each show costs $10 but a festival pass (good for the entirety of the festival) is only $35. The festival ends October 20th.
Comedy Bar (945 Bloor Street West), October 12-20, 2012, 8PM $10

Screemers
The original Halloween scream park returns for its 20th year at the CNE with six main attractions including a haunted house, an insane asylum full of psychos, a wax museum of slasher film characters, and a maze full of maniacs. The Ex midway will be open with five rides, such as the Sizzler and the Freakout. Screemers is open every Friday and Saturday in October and every day during the week of Halloween.
Screem Elizabeth Building (190 Princes' Boulevard), October 12-31, 2012, 7PM $23.50

Lead photo from a previous Friday Night Live at the ROM event, photo of Cadence Weapon by fotograf.416 in the blogTO Flickr pool