Thanksgiving weekend events in Toronto is our guide to events happening this Friday, Saturday and Sunday. Here's what's happening in Toronto this October 5-7, 2012.

Buzzfest 2012
Indie rock bands from across North America gather at the Hard Rock all weekend for Buzzfest 2012, a music festival that showcases original talents from multicultural backgrounds. Bands like Sounds For Scieris, Uppercase, and Lucy Diamond will play to raise money for the Canadian Breast Cancer Foundation, and attract attention to unconventional underground bands. Cover is by donation only, with a suggested minimum of $10.
Hard Rock Cafe (279 Yonge Street), October 5-7, 2012, 8PM $10 minimum donation

6th Toronto Independent Music Awards
Comedian Sean Ward hosts the 6th bi-annual Toronto Independent Music Awards at the Phoenix, which will feature headlining acts like Dilly Dally, Rich Kidd with Famous, and HOTCHA! with special guests. The awards show packed with local independent acts aims to highlight musicians within Ontario without emphasis on record sales, industry contacts and recording quality. In its 8th season, TIMA will give away over 15 awards this Saturday to new and upcoming talent. Tickets are available through the official website or at the door.
The Phoenix Concert Theatre (410 Sherbourne Street), October 6, 2012, 7PM $15 advance, $20 at the door

Teenage Kicks
After a successful showing at NXNE, Toronto's Teenage Kicks, a genuine rock band who have been busy making up for the lack of alternative music coming out of the local scene these past 5 years, play Lee's Palace this Friday. Joined by The Sweet Mack, The Dirty Nil and Cubs, Kicks will play music from their latest EP Be On My Side in their hometown return show. Tickets are available at the Horseshoe and the other usual suspects (Rotate This, Soundscapes) with a price hike at the door.
Lee's Palace (529 Bloor Street West), October 5, 2012, 9PM $10 advance $12 at the door

For more music listings, check out our weekly Hot Ticket and our October concerts preview post.

Thanksgiving Day Brunch at Casa Loma
Casa Loma hosts an elegant Thanksgiving brunch in the stately library of the old Pellatt home for those who prefer to give thanks to Canadian history and gothic revival architecture this long weekend. Taking place on Sunday, with table openings happening from 10:30AM to 1PM, meal prices reflect a full brunch set up as well as a self-guided tour of the home following brunch. Reservations can be made by calling 416-533-1573.
Casa Loma (1 Austin Terrace), October 7, 2012, 10:30AM-1PM, $13.45-$51.45

Youth Dialogue: In Search of Shared Identity Through Food and Language
Chef, restaurateur and author Sang Kim leads a workshop for young food enthusiasts that will allow them to explore identity and cultural connectedness through the culinary arts. Engaging the group in a sushi-making workshop, Kim will instruct on the linguistics behind food tasting and prep at the North York Civic Center this Saturday. This is the 7th event in the Youth Dialogue series as presented by the Toronto Association for Learning and Preserving the History of WWII in Asia (ALPHA) and it is open to all, with registration required by e-mailing youthdialogue@torontoalpha.org.
North York Civic Center (5100 Yonge Street), October 6, 2012, 11AM $5

For more food news and events, check out our This Week in Food post as well as our round-up of restaurants serving Thanksgiving meals.

"The Cliff" Books 1 & 2 Comic Book Launch
Author and illustrator Matthew Brown releases the latest two books of his graphic novel series "The Cliff" this Saturday at Tranzac Club. The story of a young prince exiled from a strange world known as "The Cliff" when he meets a troubled young woman who leads him on dangerous adventures, the book is as charming as it is quirky and violent. The artist will be present at the launch tonight to chat and sign books, and violinist Ezra Azmon will perform. The launch is free and will feature the comics on sale at a discounted rate.
TRANZAC (292 Brunswick Avenue), October 6, 2012, 6PM Free 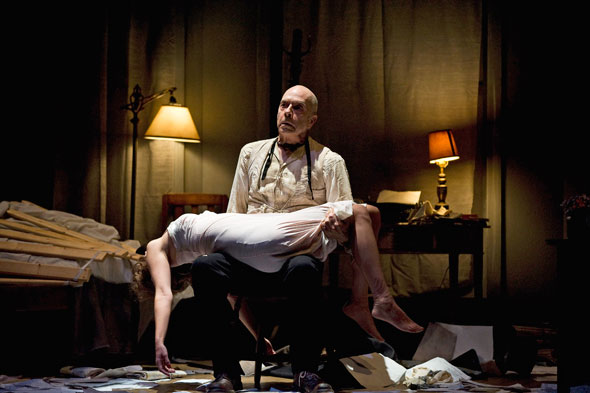 Tear the Curtain
Set in 1930s Vancouver, theatre critic Alex falls for actress Mila and finds himself entangled between two warring mafia families--one that controls local theatres, and the other in charge of the town cinemas. Opening Sunday afternoon for a limited two-week engagement at the Bluma Appel Theatre, Tear the Curtain is a psychological thriller created and directed by Kim Collier and starring Jonathon Young. Tickets available through the Canadian Stage website.
Bluma Appel Theatre (27 Front Street East), October 7-20, 2012, $24-$99

The Nightmare Before Stripmas: A Tim Burton-Themed Burlesque Show
The Underground Peepshow takes a twisted turn into the dark side of a genius' mind with a Tim Burton inspired burlesque show. Opening this Saturday at the Projection Booth, The Nightmare Before Stripmas pays tribute to the films, style, and iconography of the director's work through costuming, music and stage design. Hosted by Alex and Velvet Valhalla, the evening will feature performances by Gigi Vanilla, Bella Fox and Betty Quirk amongst others. Tickets are available through the UP website and at the door.
The Projection Booth Metro (677 Bloor Street West), October 6, 2012, 9PM $16 advance, $20 at the door

Really Really Free Market
A one-stop swap where you can grab anything from clothing to shoes to accessories (and even a toaster), the Really Really Free Market returns for the long weekend--so you can be thankful for finally finding something cheap in Toronto. Gently used items donated to the market by good folks like you are up for grabs, with zero tolerance for money or bartering. All goods you wish to contribute must be submitted by 5PM, and anything not grabbed is donated to local charity. It's really, really free so stop by Campbell Park on Saturday to rummage.
Campbell Park (255 Campbell Avenue), October 6, 2012, 10AM Free

Fedora Upside Down Festival
Music, poetry, performance art, and clowns may sound like an odd mix but that's exactly why this festival is called Fedora Upside Down. Taking place this Saturday across four stages at the Ukrainian Cultural Centre, artists will mill about everywhere, performing and collaborating in the open and friendly environment that is FUDF. Music by bands like Lemon Bucket Orkestra and Nick Teehan will be accompanied by artwork from the likes of Kosa Kolektiv, as well as dance, workshops and poetry. Purchase tickets pre-sale to save a large chunk of change, and in the spirit of obviousness, bring a fedora.
Ukrainian Cultural Centre (83 Christie Street), October 6, 2012, 2PM $20 advance $30 at the door