Weekend events in Toronto is our guide to events happening this Friday, Saturday and Sunday. Here's what's happening in Toronto this September 14-16, 2012.

Queen West Art Crawl
The QWAC returns for its 10th annual art festival, where Queen Street is overtaken by canvasses, prints and sculpture. 250+ artists are set to participate in this year's art crawl, which takes place over 2 days from the Fashion District through Parkdale to Roncesvalles. The Parkdale Nightcrawl returns on Saturday night and the outdoor show and art sale will be based out of Trinity Bellwoods Park this year. Be sure to check the Queen West Art Crawl website for the schedule of walking tours hitting up galleries and stores like Lomography Gallery Store and Goodfellas Gallery.
Queen Street West (between Bathurst and Roncesvalles), September 14-16, 2012, 11AM Free

The Power Plant Gallery's Opening Party featuring Christian Marclay's "The Clock"
The Power Plant is kicking off its Fall 2012 season in style, with a free and open-to-the-public party as part of its year-long birthday celebrations (it turns 25). With the DJ stylings by Brendan Canning of Broken Social Scene, a cash bar, and snacks from Fidel Gastro and Ezra's Pound, perhaps the coolest part is the opportunity to be among the first (in Toronto) to witness Christian Marclay's fantastic "The Clock," which will keep the gallery open for 48 hours straight to allow for full viewings of the 24-hour looped installation.
The Power Plant (231 Queens Quay West), September 14, 2012, 5 PM-11PM, Free

Toronto VeloReel
A one-day festival celebrating bike culture in Toronto, VeloReel makes its debut as a film festival this Saturday in Liberty Village. VeloReel features 8 hours of short films, including special screenings at dusk, all circling around the theme of bikes. With a majority of Canadian films on the roster, the festival takes a look inside subcultures Canadians normally ignore: bike messengers, local bike gangs like The Deadly Nightshades and Alleycat racers are the subjects of various films at this festival. This isn't TIFF, so bring your bike and stay for the after-party, where all are welcome.
7 Fraser Street, September 15, 2012, 12PM $5

Roncesvalles Polish Festival
When in Polish town, drink as the Polish do! Roncy opens its main street to pedestrians this Saturday and Sunday for its annual Polish festival. The best Polish food in the city will be served out of food stalls with plenty of carnival favourites also being up for offer (and just in case you didn't get your deep fried fix at the CNE this summer, there will be funnel cakes). Beer gardens and modern, as well as traditional, Polish music and dancing make for the main attractions. Stop by for some paczki!
Roncesvalles Avenue, September 15-16, 2012, 11AM Free

September Swap Party
If you're sick of looking at your Fall 2011 clothes already, head down to McCaul Street this Saturday to swap them out for someone else's wardrobe. The September Swap Party is looking for participants with at least 5 articles of clothing in clean, good condition to contribute to the swap. Clothing, shoes and accessories are welcomed with on-site alterations available on site. Don't have anything to swap? Just bring an extra $10 and "shop" around. All articles not swapped out will be donated to charity at the end of the event.
Beaver Hall Gallery (29 McCaul Street), September 15, 2012, 12PM $8

Lomography's Big Sale
Looking to capture the changing colours of the season in style? Lomo's got you covered with a sale that promise up to 70% off cameras and accessories, so you can put down your Instagram, and get a bit more DIY.
Lomography Gallery Store (536 Queen St. West), September 14-September 16, 2012

City Cider
Spadina Museum welcomes fresh food and cider lovers on to its historic site for Not Far From The Tree's 2nd annual City Cider Festival. Freshly-pressed cider will be made and served in front of attendees, who are welcome to heritage apple tastings and orchard tours. Local food and music will provide full bellies and entertainment and there will be plenty of activities and workshops to participate in. If you love to eat fresh food and drink, this is your event for a September Sunday.
Spadina Museum (285 Spadina Road), September 16, 2012 12PM $5 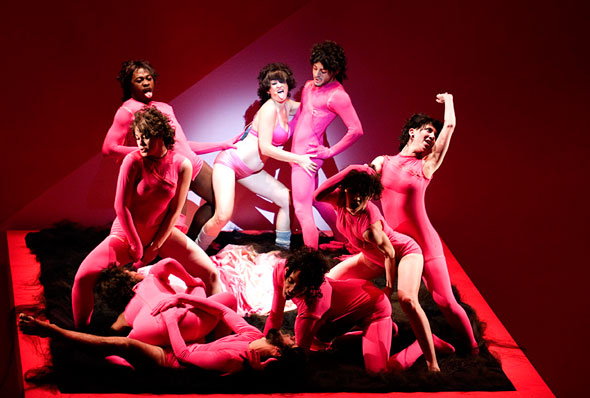 S.S. Songs
Young Lions Music Club is throwing an end-of-summer party out on the water of Toronto Harbour called SS Songs, featuring special guest Andy Rourke of The Smiths DJ'ing on the main deck. Below decks, Toronto's favorite cover band Dwayne Gretzky, July Talk and Stella Ella Ola will be playing sets in the ship's dining hall. Dwayne Gretzky are one of the worst-kept musical secrets in the city, a must-see not-so-guilty pleasure act, and July Talk and Stella Ella Ola are each getting plenty of buzz on their own.
Get on board The River Gambler at Pier 31 (333 Lakeshore Blvd East), 9:30pm sharp (so get there early to avoid -- I can't believe I actually get to write this -- missing the boat) $15.

Toronto Bicycle Music Festival
An affiliate of Toronto VeloReel film festival, the Toronto Bicycle Music Festival kicks off its third annual mobile music fest this Saturday with a ride around the city to catch bands like Lemon Bucket Orchestra, Gentleman Reg and Rae Spoon. The ride begins near the lake at Coronation Park and continues on to Liberty Village and Christie Pits Park. Bring a bike, picnic blankets and some cash to donate to the helmet that will be passed around. See, hear and spin your little hearts out!
Coronation Park (Lakeshore Boulevard West and Strachan Avenue), September 15, 2012, 2PM Free

Peaches does the Drake
Peaches--a.k.a. the soundtrack to your confusing, sexualized teen years--knows how to put on a show. As part of TIFF Future Projections, and to promote her film, Peaches Does Herself, she'll take over three floors of the Drake, alongside The Fatherfucker Dancers and performance artist Danni Daniels, and backed by her 3 channel, collaborative video installation with Vice Cooler. There will also be a lazer harp. Enough said.
The Drake Hotel (1160 Queen St. West), September 14, 2012, 9PM, $10

For more music listings, check out our weekly Hot Ticket post and our round-up of September concerts.

Time Out
Torontonian Erin Keaney is the momedian behind MotherloadTV, a hilarious webisode series about the trying times of motherhood. Keaney brings her special maternal comedy flare to Lazy Daisy's Cafe this Saturday with some friends and special guests joining her onstage. Time Out tickets can be purchased through the MotherloadTV website or at the doors. Be forewarned, this event is standing room only.
Lazy Daisy's Cafe (88 Hollywood Crescent), September 15, 2012, 7PM $10

Til Death Do Us Meet
Touch My Stereotype presents a one-night only performance of Til Death Do Us Meet, a piece of mystery theatre surrounding the events at a memorial service for Mr. William Hale Gallagher. A veritable whodunit with a cast of actors portraying the many wives and children of a well-to-do oil tycoon, the 60-minute performance is an original piece by the TMS comedy group. Seated is limited, with tickets available only at the door. Meet early or meet death (just kidding; hope not).
The Unit 102 Theatre (376 Dufferin Street), September 15, 2012, 10PM $15

Lead photo by Roger Cullman, second photo from Peaches Does Herself