Photo: Fleur/Flower by faramars1, member of the blogTO Flickr Pool.

MUSIC | Small World Music Festival
For the next week, the Small World Music Festival will be bringing some of the best in world music to Toronto. Now in its eighth year, the fest will feature more artists of greater variety than ever before. The genre of world music is always difficult to define, and the descriptions on the festival's website are as intriguing as they are cryptic. What exactly is electro tango rock? Klezmer fusion? Gypsy beat? You'll just have to show up to find out. The SWMF kicks off tonight with two shows: Indo jazz ensemble Tasa at the Lula Lounge and Electric Gypsyland at the Gladstone. Runs til October 1.
Lula Lounge, 1585 Dundas St. W., $20, 9 pm
Gladstone Hotel Ballroom, 1214 Queen St. W., $15, 9 pm

MEDIA | DigitalJournal.com presents The Future of Media
As the slew of newspaper closures this year can attest, the media landscape is changing, and changing fast. Tonight at the Drake a panel of influential leaders in new media will discuss the challenges facing media outlets, and examine the role user-generated content can play in the digital news age. Speakers include CBC News' director of digital content Rachel Nixon, Rogers Communication's director of social media Keith McArthur, and Tim from blogTO. Come out to learn how ordinary netizens are contributing to the news cycle, and what the future holds for journalism as we know it.
Drake Underground, 1150 Queen St. W., Free, 7:30 pm

THEATRE | Jerry Springer -The Opera
It's a little known fact that Jerry Springer was once one of the most progressive and popular politicians Ohio had ever seen, until his political hopes were dashed when he paid a prostitute with a signed cheque (oops). Since then he's been many things: a talk show host, a poster boy for the moral decay of America, and a national joke. Thankfully, now he's also a hilarious opera. This musical is so funny that one reviewer confessed he laughed so hard he farted. The Hart House production of the British-penned play is back tonight, promising to offend even the most liberal minds with profanity, blasphemy, and a tap-dancing Ku Klux Klansman. Runs til October 10.
Hart House Theatre, 7 Hart House Circle, $25/$15 for students, 8 pm

MUSIC | Kids on TV CD Release w/ Diamond Rings
Kids on TV are known for their high-energy live shows, which usually have the band decked out in costumes decorated with sparkles or, on one occasion, angel's wings made out of 45 records. Tonight they're throwing a party to celebrate the release of not one but two records: their latest EP Shapeshifting Mutants and an album of remixes. Their homoerotic electro stylings will be preceded by Diamond Rings, the D'Urbervilles frontman John O'Regan's side project which has made some buzz thanks to his nifty lo-tech video for All Yr Songs.
Gladstone Hotel, 1214 Queen St. W., 10 pm

FUNDRAISER | Regenesis Eco Fashion and Art Show
This eco-friendly party will raise funds for the About Face Collective, a very ambitious group of local designers, artists and activists. As part of its urban ecovillage project, the collective is planning to buy an historic building downtown and retrofit it to provide sustainable and affordable living spaces for the city's green creative types. The plan calls for a rooftop garden, organic market, solar powered laundromat, and storefront art spaces. It would be really neat if they could pull it off and they need all the help they can get. Tonight's event is PWYC and features a fashion show including designs from the Deadly Night Shades and 69 Vintage, a performance renowned violinist Dr. Draw, and a silent auction of local pieces.
Arta Gallery, Distillery District, 55 Mill Street, PWYC, 7 pm

MUSIC | The Antlers live at Criminal Records
Brooklyn band the Antlers released an album earlier this year called Hospice, which went against the grain of the New York borough's hipster party pop by taking as its subject the sobering theme of terminal illness. By turns moody and boisterously defiant, the album received some great reviews from tastemakers in the U.S., including hip liberal bastion National Pulic Radio, and the trio are gracing Toronto with a free performance at Criminal Records tonight. Long live the in-store!
Criminal Records, 493 Queen St. W., Free, 6 pm

GALLERY | 8 Secondes by Nicolas Ruel
Quebec photographer Nicolas Ruel is known for his large-scale photographs. For this exhibition, Ruel visited major cities around the world, taking pictures at eight second intervals and combining the images. The result is images of urban centres overlapping each other, creating a sense of movement, confusion, and beauty. The large dimensions of the photos are designed to draw the viewer in, which should make the exhibition an engulfing experience. Runs til October 18, with a special 7 pm - 7 am session over Nuit Blanche.
Thompson Landry Gallery, Distillery District, 55 Mill Street, Free, 10 am-6 pm 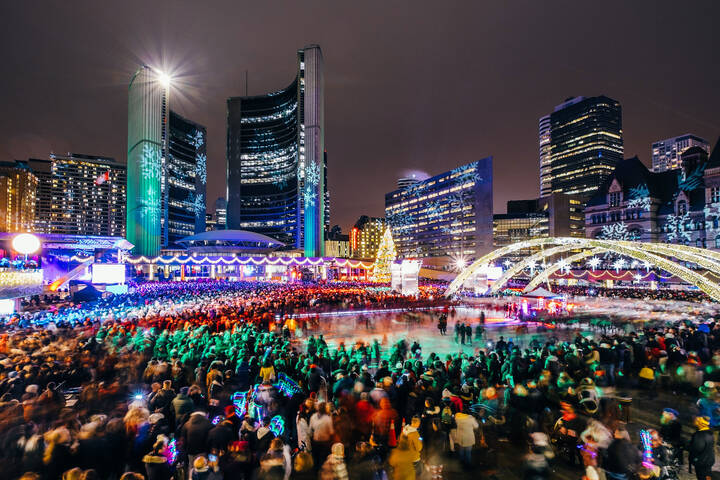