In what might be a perfect visual metaphor for the cancellation of Kanye West, a prominent Toronto street artist has erased the megastar (who now goes by "Ye") from his place next to Drake in a downtown mural.

D.TERRA, whose work can be seen on garages, walls and businesses all over the city (even on the water!), first installed his large mural of Drake and Kanye in an alley just south of Dundas, between Shaw and Ossington, in October of 2021.

"New Mural up in the alley! Drake vs Ye... celebrating two of the best hip-hop albums & artists of 2021 - inspiring!" he wrote when sharing photos of the piece on Instagram. "Thanks to the property owners for the opportunity."

This was, of course, long before the renowned Chicago rapper, producer and fashion mogel elevated his controversy-courting shtick to a level that many say is beyond redemption. 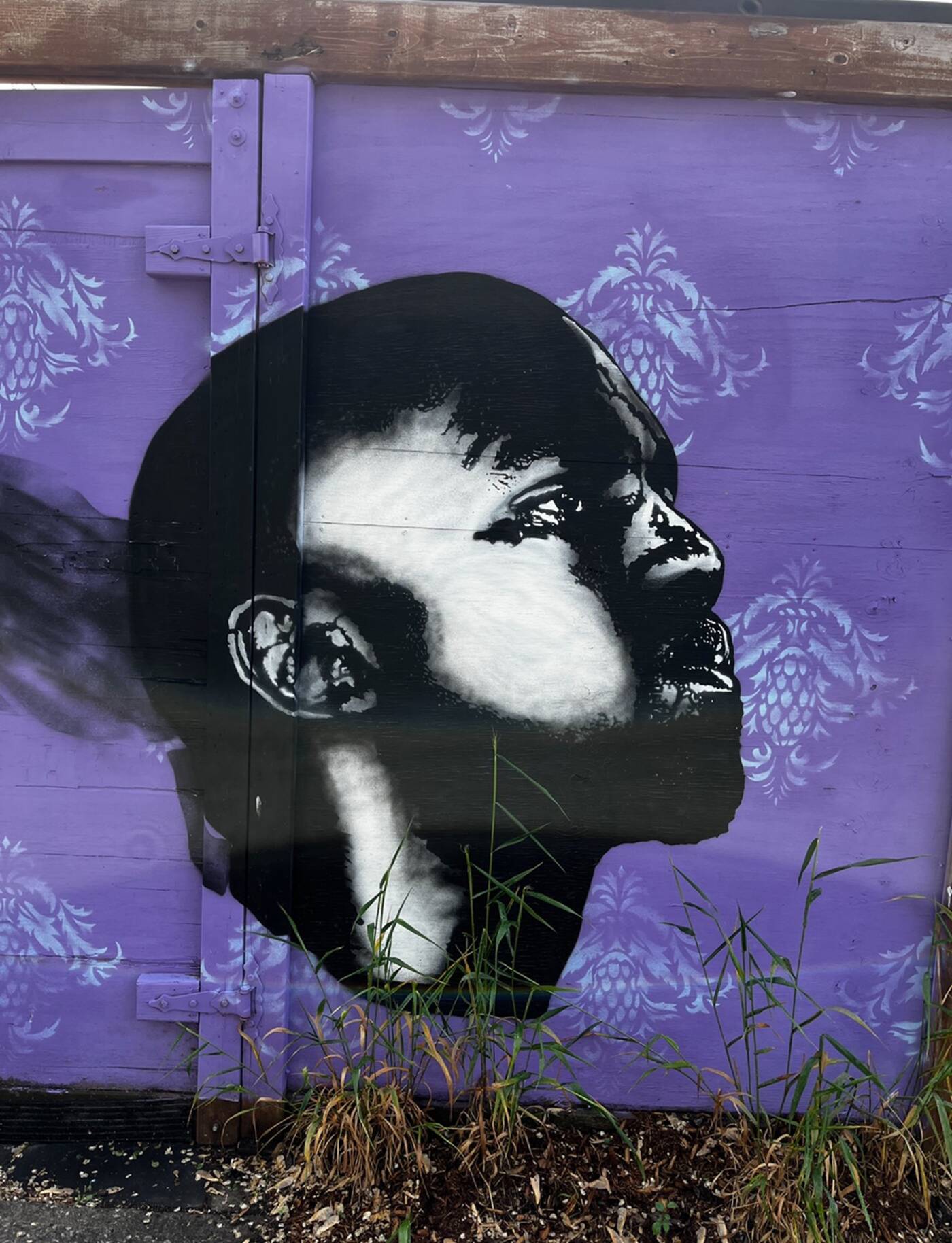 This photo was taken during summer 2022 of D.TERRA's Drake and Kanye mural, first installed in late 2021. Image via Brock McLaughlin.

Despite outburts including "George Bush doesn't care about Black people," "I'mma let you finish," "I love Donald Trump" and even "Slavery is a choice," Ye has managed to maintain a thriving music career and build a billion-dollar fashion empire.

And then, during a private fashion show for only 100 guests in Paris on October 3, he debuted a shirt that read "White Lives Matter." It's all been downhill from there: Antisemetic remarks and wild conspiracy theories led to Kanye's ban from Twitter.

Leaked footage from an interview with Tucker Carlson followed, presenting the world with Kanye's strange take on abortion and some fatphobic comments about Lizzo.

Unrepentant, Kanye continues to repeat anti-Jewish rhetoric in interviews, prompting many brands to cut ties with the artist this week — including his longtime footwear partner Adidas.

His lawyer is out. His bank is out. Balenciaga, Vogue, CAA, Gap and a whole host of athletes who've worked with Kanye have publicly severed ties.

It looks like Ye might actually be cancelled this time, and D.TERRA's recent alteration of the mural in question gives credence to that assertion. 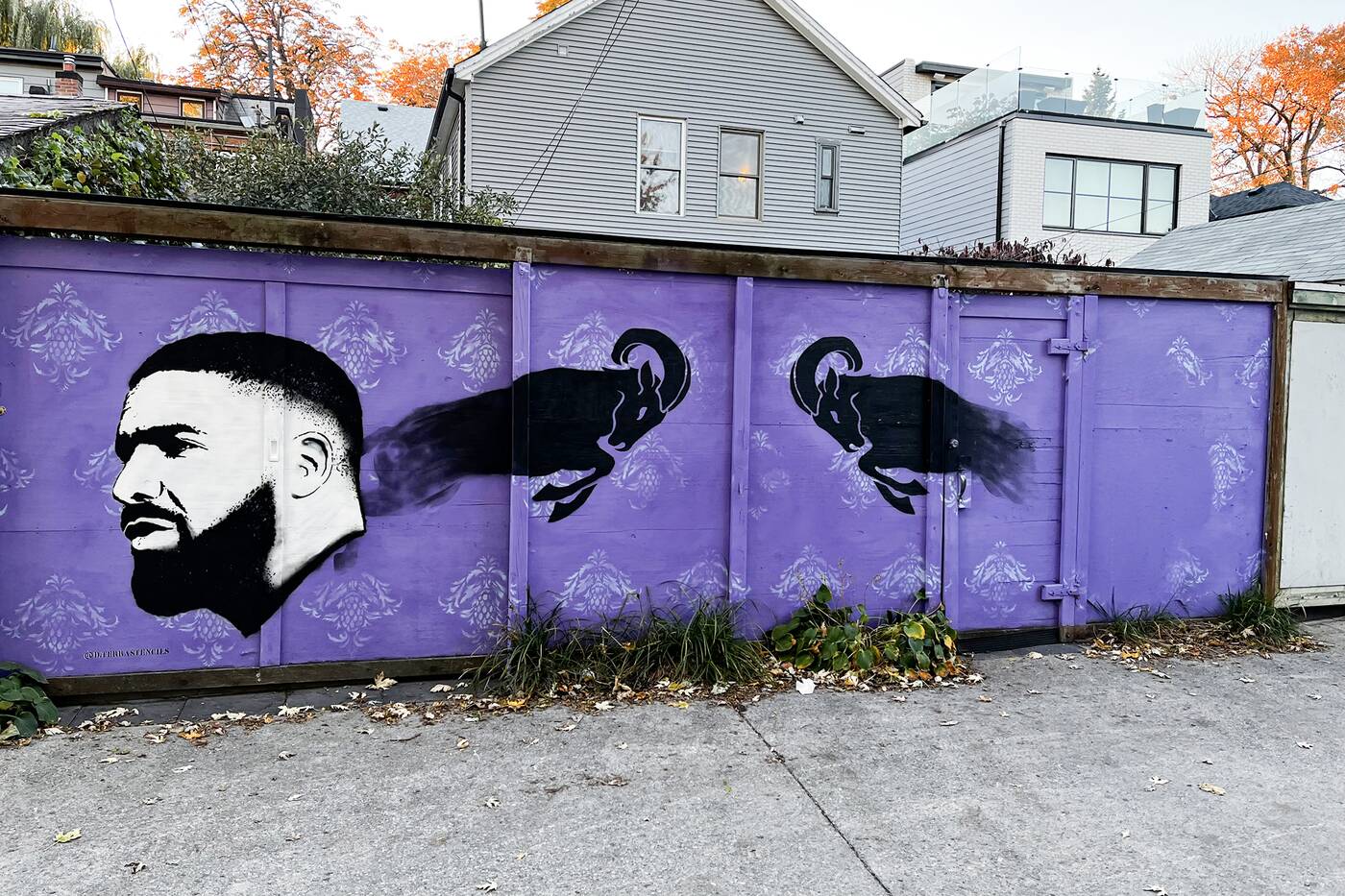 As spotted on October 26, the mural of Drake and Kanye had been modified to include Drake alone. Image via Brock McLaughlin.

"I removed Ye from the mural yesterday afternoon... I've never felt the need to do that type of thing until now, but it was the right thing to do," D.TERRA told blogTO on Friday.

The prolific artist also took to Instagram on Friday with a message explaining his decision.

"Being a music fan has never been complicated for me... until now. Last year, on the tail end of the release of two major albums by Drake and Ye I created a mural celebrating these two artists and their creative battle for the best album that year," reads the post.

"It's never been easy being a fan of Ye, always trying to give him the benefit of the doubt because I truly believed he was a genius. I don't feel like I can do that anymore."

"I've never felt the need to do something like this before but considering the dangerous hateful ideas Ye is perpetuating, I and the property owners feel it is best to remove Ye from this mural as he no longer lives up to the title of 'Greatest Of All Time'... looks like Drake won the battle in the end," the caption continues.

"J. Cole said it all in his song 'False Prophets' in 2016! I'm in the process of redesigning this mural — stay tuned."