A videographer from Toronto known for working with such local artists as the late Houdini, Burna Bandz and NorthSideBenji is calling out the city's rap scene this week for what he says is a huge level of disrespect for people in his line of work.

David Del Rosario, who has been shooting photos and videos for more than five years and went to school locally for music business, made an Instagram post about quitting the industry that has now gone viral.

In a serious of IG stories, Del Rosario stated that he's planning on selling off all of his expensive video equipment and switching careers completely because of how he's been treated by performers that he's partnered with.

"Toronto is just a city full of artists selling dreams who don't respect you unless you're slaving yourself for them," Del Rosario wrote, going on to talk about how videographers often end up getting forgotten by artists they've worked with as soon as those artists get a taste of fame, and then snubbed as soon as they start setting boundaries or "say no to something or can't do something."

He also cites people offering low pay and asking for deals, rather than accepting the rates demanded by his skillset and resume. "Boutta just go get a regular job, this ain't worth the headaches," he said. 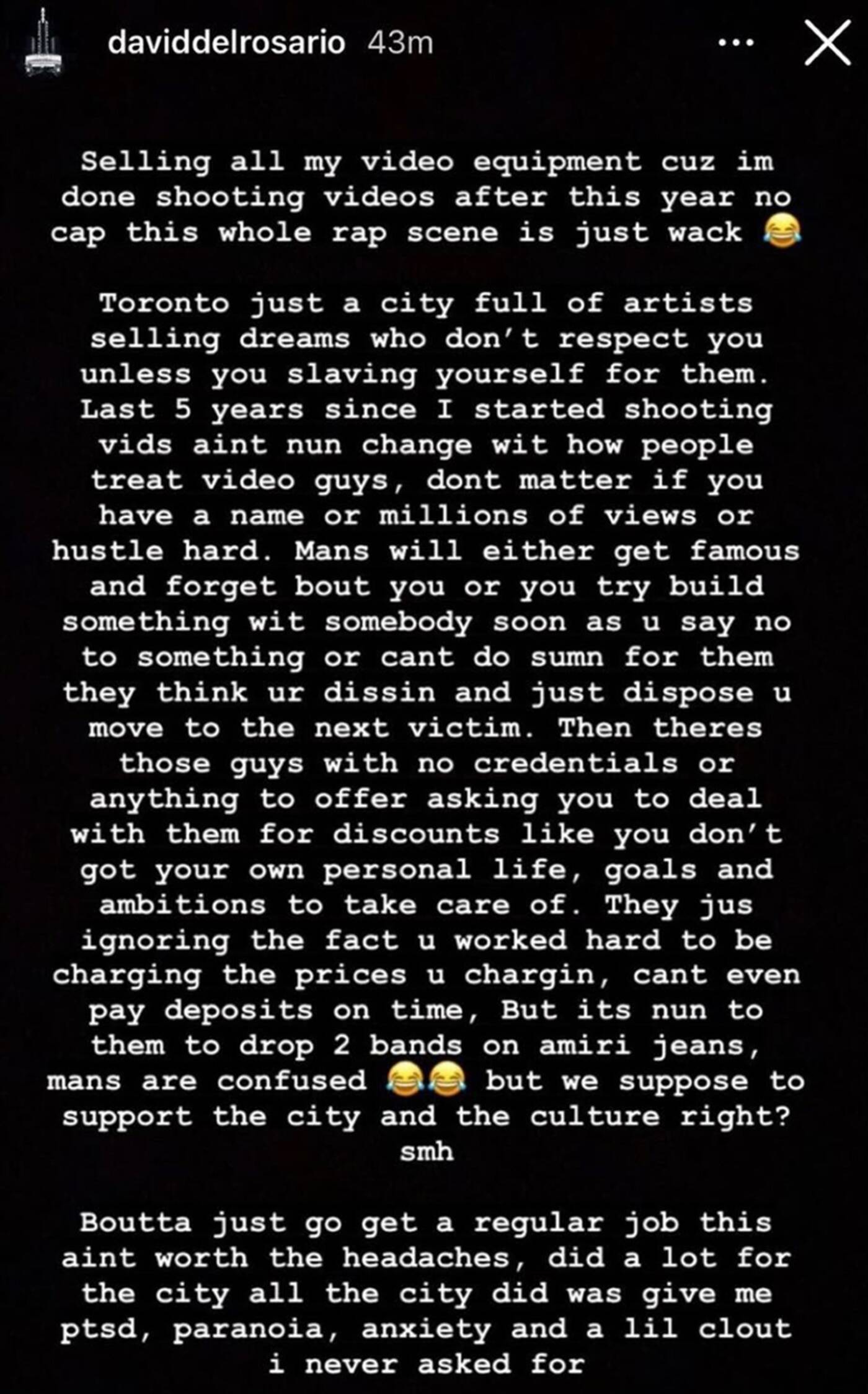 One of a series of Instagram stories in which a  Toronto videographer calls it quits over the city's rap scene.

The creative confirmed to blogTO that he is, in fact, in the process of finding a different, more stable job, and still plans to sell off his equipment as soon as he finds one.

But, he does hope to at least stay within the industry, perhaps moving over to the audio engineering and producing side of things, event hosting, brand management, or other areas he has experience in.

"I've worked in this scene and played different roles over the years [and] am very passionate and well-connected in the local music scene, so it would feel almost like a waste not to stay and utilize my network and the few good, genuine relationships I've built."

He adds that his ultimate goal would be to eventually work in A&R; at a label, as he feels like he's always been able to "spot out talent before the talent blows up."

As his post has circulated and been reshared on popular accounts like RealTorontoNewz, people have encouraged Del Rosario to switch up his location or the people he's working with instead of moving away from his passion.

But it seems that with the plans he's got, he thankfully won't be wasting his talent or abandoning his passions completely.