He made hundreds of commercials and ultimately in 2011 decided to pursue another passion and open a second-hand bookstore which will celebrate 10 years this November.

Once the business became established and developed a loyal clientele, the next chapter was making Sellers & Newel into a uniquely intimate concert destination.

"I started the live music in June 2015 and all this time it hasn't gotten that much attention, at least not from the media" says Sellers on a sweaty August afternoon, his tiny store a treasure cove of quality titles mostly under $20, as well as rarities for collectors priced in the range of $500.

"It hasn't bothered me at all, because I was getting contacted by musicians from all over the world. 'Hey we hear you have a great place to play….' I was getting emails from Nashville, from the UK, from Australia, from the west coast, from Newfoundland. And I was replying, saying 'Do you understand that this is a 600 square foot bookstore?'"

Sellers recounts how it all got started.

And then one day, a guy named Tim Hamel, who is as astonishingly great local trumpet player, and who was a customer of mine, he was in here we were chatting and he said 'you know Peter, this would probably be a great place to play music,' so that confirmed what I had been thinking.

So then I got in touch with someone who had a really big following, and whom I really liked, Kevin Quain.

In June 2015, Kevin came in and we sold 35 tickets. The place was full, everybody had a great time. And Kevin said to me, it sounds great in here, the one thing that I realized was that I couldn't do it in June because there is no AC in here, it's like a concert in a sauna.

There were requests with people from other places, Like Gary's Garage in Newfoundland…In a couple of cases, people had shows booked at Hugh's Room, and when that closed, shows were moved here. So I had Matthew Byrne, Sherman Downey, Ian Foster, some folks from out east.

Australian blues guitarist Lloyd Spiegel, he has been in here 4 times. His first show sold out in a couple of days. Then I got an email from his manager asking for nine comps from his manager, and I said 'you can’t have them, it's SOLD OUT! There's room for you and me and that’s it.'

So he said 'We have to do a second show!' and I said 'OK! We have to start with the waiting list. You want nine? That's all you're gonna get because this will sell out.'

While the series does receive some word of mouth by way of the musicians booked, the majority of the audience comes in through an internal mailing list to members of the Sellers & Newel Literary Society, currently at over 400 members.

"I have people who have come to pretty much every show, I have people who come to certain kinds of shows, and I've done all kinds of music....I try to make this welcoming, to treat the performance really well, and for the most part everybody says 'when can I come back and play again? and I sure hope it’s soon!,'" recounts Sellers. 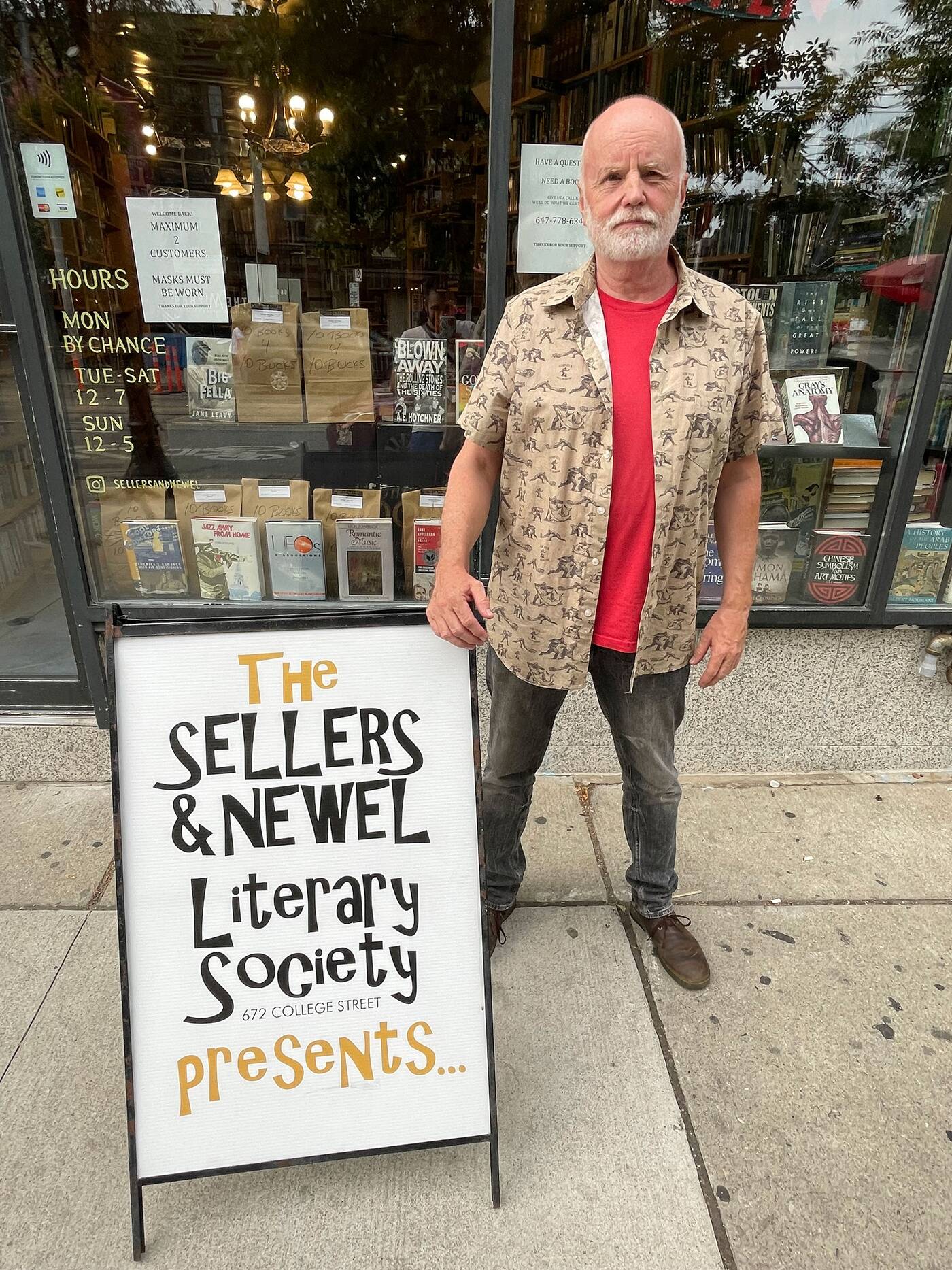 Peter Sellers outside his bookstore on College St.

Sellers also makes sure that musicians are getting paid for their efforts. The audience is expected to give a minimum donation and the performers receive 100 per cent of that money, as well as any money from the merchandise that gets sold at the events.

The lockdowns Toronto has experienced over the past year and a half has prevented this music series from happening indoors, and while there are now plans to revive it, live music is currently only happening outside of the store on Saturdays and Sundays from 3 to 5 p.m..

Music lovers are encouraged to bring cash to tip the band – and of course, to check out the timeless selections of used books at Sellers & Newel at 672 College Street.