Toronto has already proven itself as a city that can throw one hell of a summer music festival. That's why it makes sense to host a huge winter music festival, complete with igloos and fire pits, right?

Right! It looks like the people behind Montreal's Igloofest could finally be bringing a winter wonderland of a music festival to Toronto in late February 2017.

Toronto has tried its hand at a major winter party in the past with Brrrrr! and it kind of failed. While it was modelled after Igloofest, we weren't able to pull off the same sub-zero magic as Quebec's 11-year-old, multi-stage extravaganza. 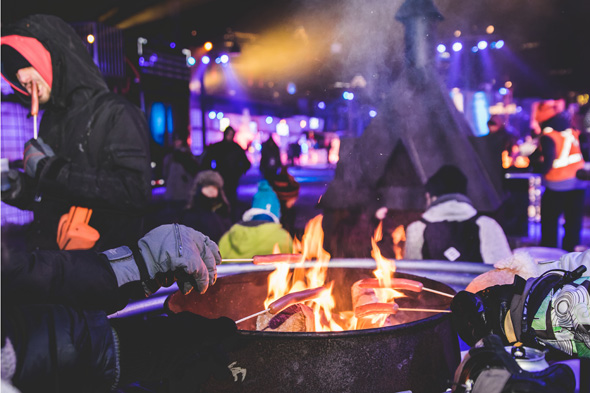 Now the Montreal organizers, the same folks who throw Piknic Electronik, appear to be ready to give it a try. They've applied for permission to "operate a beer/wine garden, host a ticketed event, solicit donations and use special effects pyrotechnics" at Nathan Phillips Square from February 17 to 20, a request which city staff have endorsed.

This proposal is on the agenda on the November 15 Toronto and East York Community Council meeting for approval.

We reached out to the organizers for confirmation on their end, but mum's the word so far. Still, there's every reason to get excited about Igloofest Toronto based on what we already know.

Montreal's Igloofest starts on January 12, 2017, so you have time to check out how the pros do it before the three-day festival lands in Toronto. Fingers crossed this all comes together.