UPDATE: An earlier version of this post said both Drake shows were cancelled. Only the Oct. 9 concert is cancelled, the Oct. 8 one is still on at the ACC.

Drake fans in Toronto (AKA the entire city) are in for a big disappointment because our city's most famous rapper announced he's cancelling an upcoming Toronto show at the Air Canada Centre.

According to a note on the OVO website, Drake writes that he has to postpone one Toronto concerts (slated for Oct. 9) as well as one in Philadelphia due to a recent ankle injury.

"I hate to be told I can't do something," he says. "But under doctor's orders to allow me time to recuperate, I am being forced to postpone the intense three shows in a row in cities which have only shown me unconditional love and support." 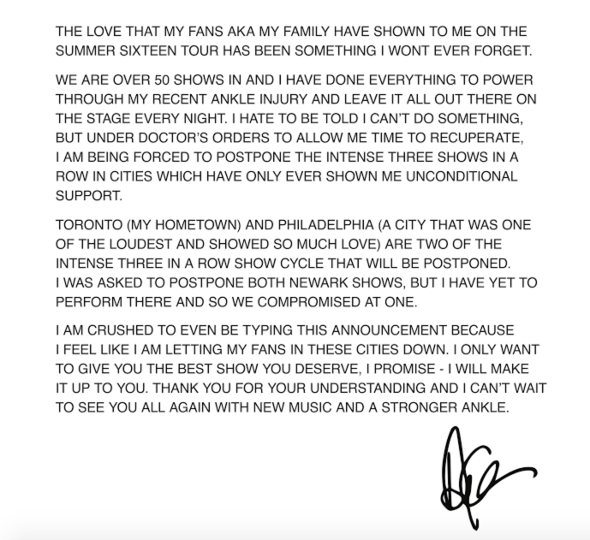 There's no word yet on whether or not the show will be rescheduled any time soon. It's also totally a coincidence that one of the concerts would have conflicted with one of the Jays playoff games versus the Rangers.