Imagine a musical genre with no rules, no real notes to read, no restraint. A genre where even if you're completely tone deaf or if you were that kid in grade five choir who sang louder than everyone else, you'd feel right at home.

This genre exists. It's beautiful in its own way and while some will first hear it and think "what in the hell is this noise?" others will be moved, open their mouths and join in.

The genre is called Shape Note singing, and it's one of the oldest forms in American music history.

"Everyone experiences it differently," Frank Griggs says. He's been participating in Shape Note "singings" since he was in high school and now helps with Toronto events.

He's travelled through the US and Europe singing as well. "It can be a very moving experience. [It's] really loud, you're singing harmonies with a big group of people, there's reverberations and over tones and you can feel things. People ascribe whatever they want to those feelings."

It all began in the late 1700s in churches in the American colonies. Musical notes were assigned shapes (triangle is fa, square is la and the circle is so and the diamond is mi) so that people who couldn't read music could join in. Essentially when you sing a song, you're reading shapes. 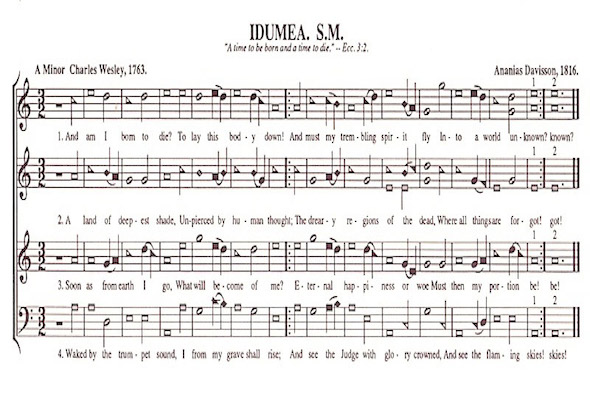 All the songs come from one book called the Sacred Harp, which is like the genre's bible. The words are dark, they're usually super religious, and there's a lot Jesus. "It was the pop music of it's day," Griggs says.

"People were obsessed with the Sacred Harp back then. 'OMG what's your favourite song?' 'OMG I love page 235!' It was pop music in a sense." Then the trend suddenly ended.

"It fell out of fashion in New England because European classical music was introduced," Frances Miller says. Miller is an ethno-musicologist, a trained singer and a Shape Note participant and organizer. " The genre was looked at as a low brow musical form in the way people thought about punk. It's beautiful you; just need to look at it in a different way."

It was not until the 20th century that the American folk tradition adopted it, mostly ignored its deep religious roots and started the Shape Note resurgence. It's not really associated with a church or a religion anymore. It hasn't stopped since and is now sung by Sacred Harp groups literally all over the planet.

Miller was struck by Shape Note for the first time after stumbling upon a 1942 recording of The Alabama Sacred Harp Singers' "Present Joys" recorded by Alan Lomax.

"They were singing four part melodies, which just happen to interweave and as a singer I recognized that it was an incredibly challenging thing to do without any music training. I was so confused."

So why is it so popular today? There are groups all over the world (find them all here), and the Toronto group is a popular one with singing sessions every month and larger meet ups a couple times a year. What makes this fluid, loud, lawless genre so appealing?

"When I first went to the Toronto group, having no clue about the words and understanding the fact that most people in Toronto signing it are not religious," Miller says. "They were singing about hell fire and 'we're just passing through this life and waiting to die,' and I was just like oh God."

But she kept going back.

"Often it's just a cathartic experience singing with these people," she says. "Singing often times as loud as you can. It's very therapeutic.

"Even if you don't believe in what you're singing, there's still this euphoric feeling that overtakes and there's some sort of rhythmic coming together that could be synching brain waves and pulses... people experience that feeling whether you're religious or not."

It's messy, but at the same time organized in a lovely communal way. People stand in a square and sing into a middle space, not to an audience. You can come and go as you please, and similar to a groups like Choir! Choir! Choir!, but without the pop melodies, it's a space to show up, sing at the top of your lungs and leave feeling great.

"There's no director, no one's really listening to you, and that's the best thing," Griggs says. 'Everyone's singing together as a group, but you're singing loudly and it's more about the act then about the end result."

There's a leader who counts time with every song, but there's definitely no judgement and singers of all levels and non-levels.

"It's a welcoming, non-judgemental space, where you don't need to be able to read music but you will over time," Miller says. "The shapes eventually embed themselves in your mind.

"If you're interested in historical poetry, it feels like they're stepping in the shoes of someone from back then."

All the lovely people you meet and yell/sing with aside, it's also a pretty bad ass, goth-fuelled dark activity for those who need to rebel against something.

Miller continues, "He was brought there from a metal head who was just like, 'these songs are so dark man, you gotta hear them."

Photo by Thomas Evers from the Toronto Shape Note website.