Earlier this month Toronto's most noteworthy underground radio station announced it's pulling the plug at the end of August. While this may not be absolute end of the Toronto Radio Project (TRP), everything definitely needs to be reimagined.

"The simple reason is money - lack thereof," Frazer Lavender, one of the founders of the station says. "City Beat is closing down and we can't swallow the extra rent. This has forced us to look at how we can revamp the project, so that we don't operate on such a shoestring budget."

Lavender started the station back in 2014 after he moved to Toronto and realized there was nothing like it. He posted an online ad looking for interest and Michael Newton answered the callout. They immediately began looking for local DJs and programmers to create content, all the while building the studio in the basement of a Bloordale vintage shop.

In June 2015 the boys and their army of music-minded hosts moved above ground to a tiny space at College and Dovercourt, the former home of Blood and Bandages barber shop. It may have been the size of a closet, but it was effective nonetheless.

"The main two things the move brought was greater visibility in the community, like, physically, as we weren't tucked in a basement anymore, but also the inclusion of City Beat Records, whom we've shared a location with," Newton says.

"You get people popping in, shopping for records and just kinda listening in on the live programs, all a few feet away from where they're happening. I always thought that was a really cool concept to have an open studio. It's more of an old-school radio thing.

"Nobody lets you just drop in on the action anymore, and I think it's important that people got to see that our programmers weren't just playing a tracklist of some automated radio-DJ software. They we're lugging records to the studio or switching things up on the go. It brought a sense of excitement and 'live-anything can happen' to the station."

If you ever walked by the space while a show was happening, there was a buzz outside. Even if you didn't quite know what was going on, you wanted to. It was a miniature musical workshop, where hosts expertly plugged away at creating unique programming unlike anything you'd ever, ever hear on mainstream radio.

"Moving to college felt like we arrived," Lavender says. "It also coincided with us winning Best Online Station in North America at the Online Radio Festival in Zurich. With international DJs coming into our tiny studio to spin, coupled with an ever-expanding, eclectic roster of local hosts we were definitely making an imprint culturally. 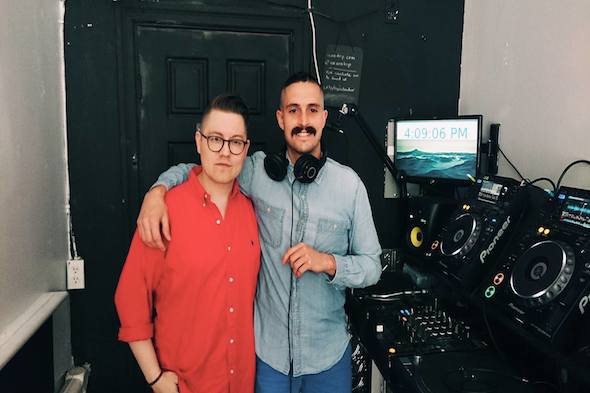 Dylan-Thomas Childs is one half of Toronto Disco dynamos A Digital Needle had a show called Beam Me Up with his partner in crime John Michael Joseph McLeod. They're among the 62 other shows the station hosted.

"The experience was wonderful," Childs says of their time there. Their final show will be August 24 from 4-7 p.m. "Complete creative control and terrific support from staff. We were shocked [about the closure], but we knew they were operating on a shoestring. Hopefully this is not the end but simply a hiatus and a new beginning."

So, about the shut down. It happened fast and it happened not only because of City Beat, but a few other factors that make it difficult for an independently run station to exist in Canada.

"If we were to get on-air sponsors on the station, the SOCAN fees we pay shoot up," Newton says. "There's a bunch of grants we're ineligible for because we don't adhere to CRTC broadcasting standards, and for us to adhere to those standards, the entire landscape of the station and what gets played would change.

"That's not to say that there isn't a tonne of local and Canadian talent represented on the station, but it's done naturally as so many of the programmers are also Canadian artists within the music community."

It's the programmers that Lavender and Newton can't stop gushing about. Hanging out with the "ultra passionate about music" day after day and the content that blasted out of the speakers is what gives them hope that TRP isn't actually over.

"I think TRP was, and still will be, important to Toronto as it was an outlet for outsiders to share and present something they love to a decent sized audience," Newton says.

"In a world where with the internet and streaming services and even YouTube where [many] don't care much for audio quality, you can pull up nearly anything you can think of, and listen to it on demand, I think it's really touching so many people chose to listen to us.

"That's 100% because of the strength of our programmers, DJs and hosts. I think it will be missed for that reason exactly. Tastemakers don't often get open, restriction free platforms, and TRP offered one."