Women DJs get the spotlight in Kensington Market

Ahh, techno. It's noisy, joyful, body-centric, and wonderful in many ways but it can also be pretty awful when it comes to gender. Ask DJ Mag's Top 100 DJs why there are so few women on the list in 2015 and you'll read a pile of convoluted manboy garbage, full of cringe-inducing quotes such as "guys get way more into this stuff than girls."

A Tumblr called Very male lineups shows that the problem is invasively systemic, from big-room commercial DJs to underground scenes. For this reason, seeing DISCWOMAN play in Toronto on Saturday October 25 was a blessing that our city was much in need of.

The NY-based female DJ collective has been turning heads in the past year, playing alongside Detroit legend K-Hand and doing international gigs everywhere from San Juan to Puerto Rico. Helmed by co-founder Frankie Decaiza Hutchinson, their mission is simple: showcase the wealth of female-identified DJ talent in the electronic music community. 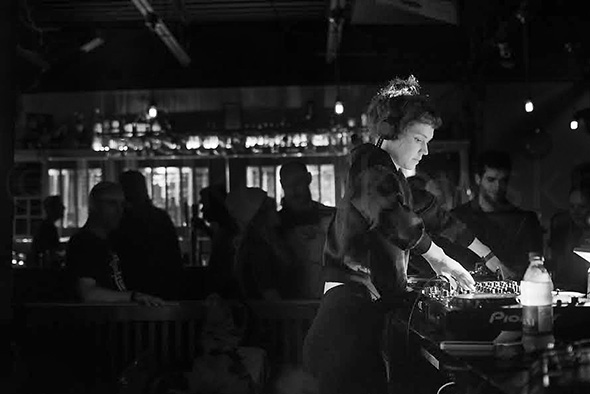 DISCWOMAN's presence in Toronto was facilitated by a new up and coming group of promoters, the Work In Progress crew. Made up of Cindy Li (whose radio show on TRP shines a spotlight on amazing, consistently under-looked female techno artists) and Nancy Chen (who, between Otto's Berlin Doner and Mansion parties, has been traceable to 70% of successful events in Toronto at this point).

"For me, representation, visibility and equality has been, even before specifically listening to techno, really important to me," Li tells me. "It seemed like a no-brainer - from the point that I started to book shows, this just made sense."

Held at Round in Kensington Market, the event saw the dance floor fill up quickly as CL (aka Cindy Li) warmed the room up with the dystopian, paranoid clang of tracks like Matrixxman's "Sermons". The energy of her set felt palpable, with the crowd already shouting out cheers of support during the breakdown of one of Li's tracks.

ORPHX's Christina Sealey followed, ratcheting up the energy with a set that felt like it was consistently scaling upwards.

Perhaps the highlight of the night was Volvox, who's recently become well-known for her monthly residency at New York's Bossa Nova Civic Club. Over the last few years, she's built a reputation as one of the city's most in-demand and versatile DJs, and her skills were out in full force as she banged out a relentless set of acidic house that kept all the integrity (and pure joy) of the early 90's. 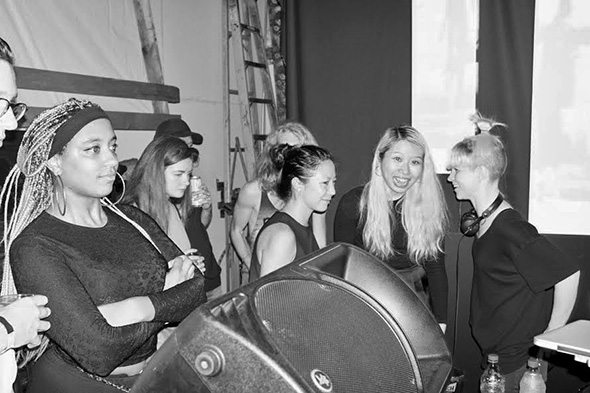 Because Round agreed to keep the music playing until 4 a.m., Brooklyn's UMFANG was able to take things into deeper territory, kicking off her set with the muted spiritual tones of Huerco S' "No Jack." Emma Olsen's extensive knowledge of dance music history came across in a set that felt like it touched on many a dusty, long-forgotten corner of the rave world.

While the techno community should feel a moderate amount of shame that booking women-led DJ collectives is still an exception to the norm, DISCWOMAN feels like a shift in consciousness, a catalyst for change.

"I want women who to go out to see someone DJing in front of them that looks like them" suggests Li. "By doing a party like this, we want to perpetuate a change in the scene where there are more women taking charge and stepping up to the plate."