Toronto concert-goers latched on to more than just music after a Disclosure show at Exhibition Place's Enercare Centre this past Saturday night. Following the performance, a crowd of people rushed into the coat check area, leaving many without their belongings.

Many are now claiming to have had their jackets stolen, reports CityNews. And despite the rather chaotic post-concert scene, others allege that on-site security did little to control the apparent looting.

One woman says it was one of the most poorly organized events she'd ever been to. While she left the concert prior to the coat check fiasco, she remembers seeing men and women lining up to use the washroom in any random closet or corner they could find.

Some say they lost expensive leather jackets. As CityNews notes, another woman, who traveled to Toronto from a town near Sudbury, is not only missing her jacket, but also $200 in cash, her inhalers and her house key. On Instagram, one woman posed with a passport she picked up at the show. According to the Toronto Star, her account is now private.

Embrace Entertainment organized and promoted the concert. By Sunday, many disgruntled Disclosure fans took to Reddit and to Embrace's Facebook page to voice their complaints. The promotion company responded, directing those with missing items to info@coatconnexion.ca, the coat check provider.

A video, posted to YouTube by Melanie L appears to show the post-concert coat check mayhem.

Some of the concerns from disgruntled concert goers are captured in the Facebook screengrab below. 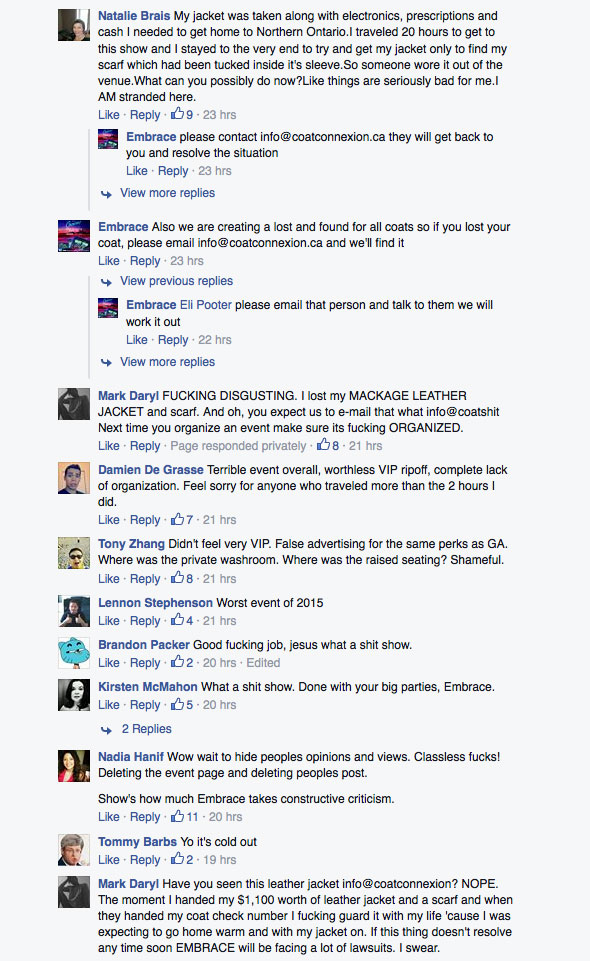 Did you go to the Disclosure concert in Toronto? Share your experience in the comments.