Polaris Music Prize winner Tanya Tagaq and Tuvan folk musician Radik Tyulyush approach the intensely visceral technique of throat singing from traditions born on two radically different continents, and take nearly opposite approaches to presenting their craft to audiences, but proved to be a perfect match for each other at the Aga Khan Museum.

The combination of Tagaq's experimentalism and Tyulyush's traditionalism made for a thought provoking evening of music and ideas, not to mention dazzling displays of vocal talent.

The Aga Khan museum is an indisputably gorgeous building, but not that welcoming to get to if you don't drive. Especially if you get off the bus prematurely and get lost in the winding pedestrian-unfriendly roads surrounding the complex.

The centre's focus is on Islamic history, art and culture, but their live performance programming stretches far beyond that in an effort to build bridges with other cultures. The concert hall itself boasts great acoustics, a crystal clear sound system, comfortable seats, and a deceptively intimate design that makes the room feel much smaller than it is. 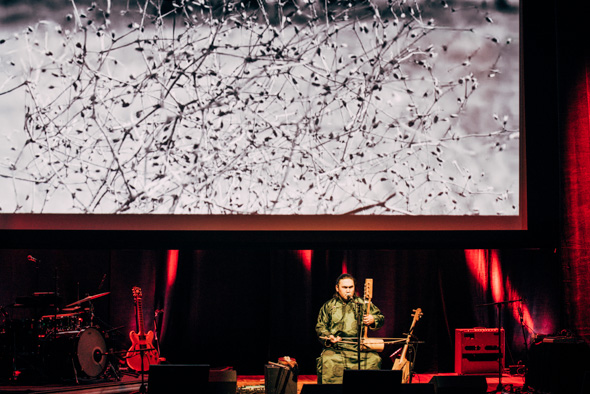 Radik Tyulush was raised near the border of Mongolia, and originally made his name playing in fusion bands that combined traditional Tuvan sounds with rock music. In more recent years his work has become increasingly traditional though, whether performing with the band Huun-Huur-Tu, or solo, as in this case.

Extremely soft spoken, Tyulyush cycled through a number of instruments throughout his set, offering brief explanations in between songs. As skilled as he is bowing, plucking, and blowing his various musical tools, the most arresting moments came when he relied completely on the power of his own voice, stunning the crowd with dazzling displays of control. 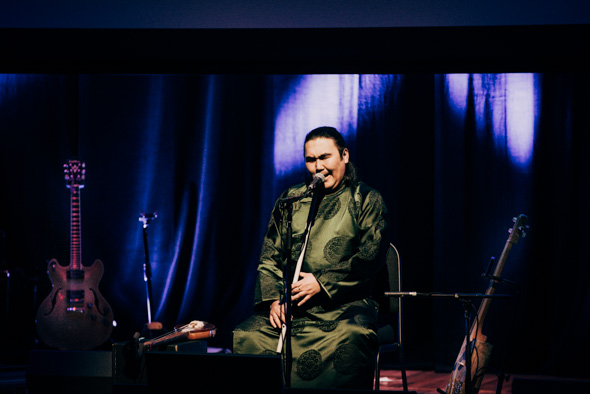 Hearing Tuvan throat singing from a group is an otherworldly experience, but it's even more impressive when you hear the eerie resonant tones coming from a single body. The physical control required to sing such long drone notes while modulating a second melody by changing the resonance of his throat and mouth is undeniably impressive. At times his voice sounded more like an analog synthesizer than a human. 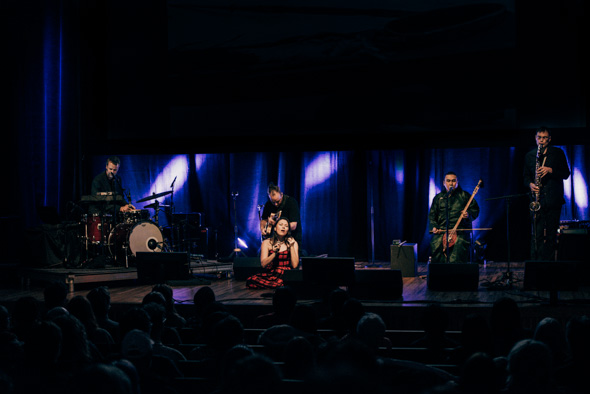 After an intermission, Tanya Tagaq took to the stage with her band and began her set with a long patient explanation of the tradition of Inuk throat singing, while taking pains to make it clear to the audience that her use of those techniques is very far removed from the historical model. Unlike Tyulush, her career trajectory has seen her move further and further away from folk music and towards the avant-garde, although her use of ancient Inuk techniques has helped her gain a foothold in settings like this.

This performance was a bit different than her usual stage show, in that she and her band were providing a live soundtrack to the controversial 1922 documentary Nanook Of The North. Considered one of the first documentary films ever made, the film has also been broadly criticized for staging scenes, using a fictionalized narrative, and for distorted portrayals of the lives of indigenous people in Canada's north. 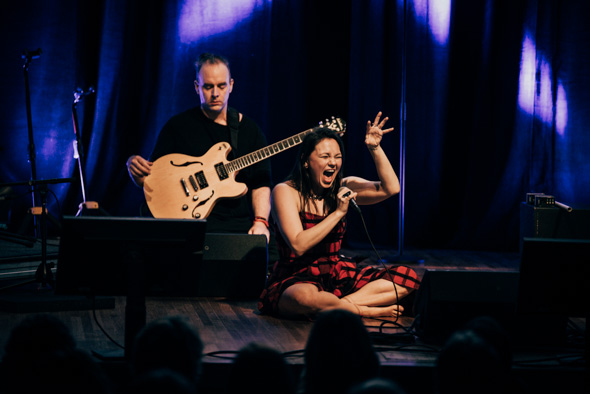 Tagaq took pains to explain that while aspects of the film are inaccurate and arguably manipulative, there are other parts that ring true, and that her performance was meant to negotiate between those responses. She said that she hoped it would be apparent which parts of the film she was reacting against, and while that distinction wasn't always completely clear, it was a powerful exercise to force the audience to continually question how to interpret the visuals. 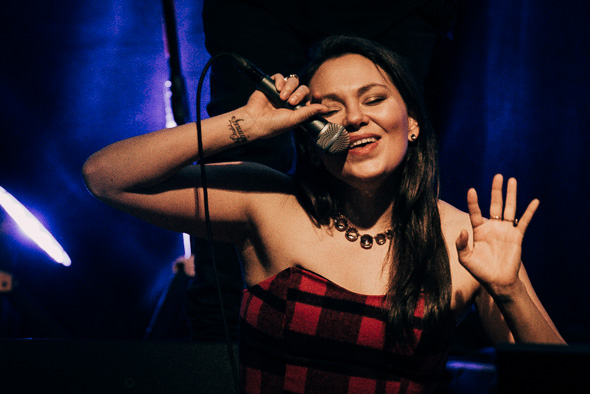 Her lengthy pre-show introductions and explanations at the beginnings of her shows are crucial to what follows, although she jokes that when she's more rich and famous she'll hire a pair of traditional throat singers to open for her so that she doesn't have to explain it. She gently warns the crowd that it will get loud at times, and calmly reassures them that no matter how she sounds she is ok. Then she tears the audience's mind wide open with powerful rhythmic grunting, wailing, and growled vocals.

The video projection above her head occasionally distracted from her actual performance, but the extra layer it added made up for pulling the focus away from Tagaq once and a while. Besides, her live show is so intense that sometimes it's a relief to have something else to look at as she contorts herself and prowls the stage, channeling demons, beasts, and goddesses. 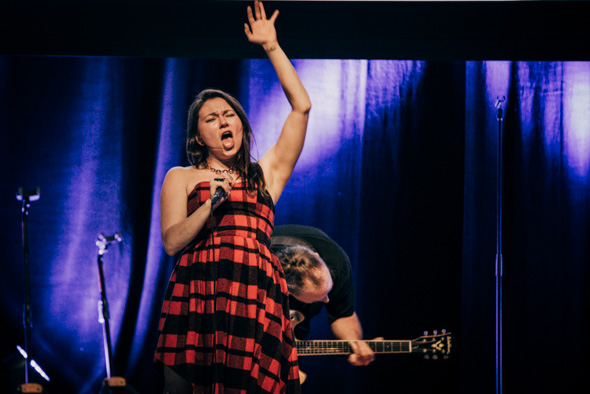 When Tanya Tagaq won the Polaris Music Prize this year, she was asked if she was surprised by the standing ovation she received after her performance at the gala. Some took it as bravado when she answered "no, we're kind of used to it", but the truth is that it's hard to react any other way after experiencing her live.

Tanya Tagaq will be back in Toronto for Luminato to recreate Apocalypsis with 1,000 other performers.