The top concerts in Toronto from 2014 were, to some extent, impossible to pinpoint, even beyond differing palates and opinions: with multiple concerts going on across the city every day, there's no way to see every mind-blowing, sweat-dripping, bone-chilling live performance. Summer overwhelmed us with concerts and festivals, but as we sit back now in the cold of December, the range between the shows we remember most fondly speaks volumes about the diversity we enjoy as a city.

Kraftwerk (March 29, Sony Centre)
This is how it feels when robots cry. Emotions were strong at Kraftwerk's Toronto show, with metal bodies thrilled to the mainframe by the rare appearance of the German electro gods. 3D visuals were very... Krafterwerkian, for better or for worse, but they included a CN Tower shout out. All in all our reviewer gave it 9.5 Tschernobyl melt-downs out of 10. 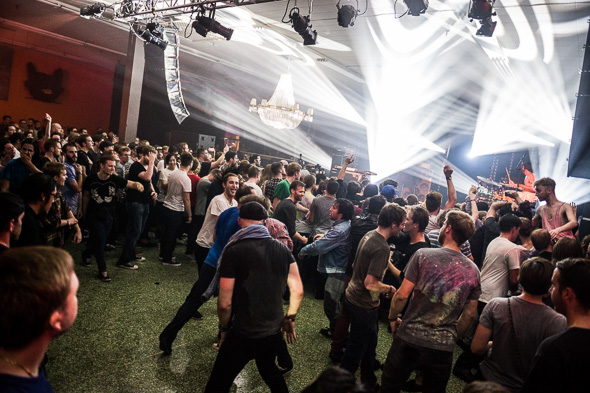 Death From Above 1979's come back shows
The return of DFA1979 seemed largely self propelled this summer, but they did a good job of stirring up local enthusiasm with two secret pop-up shows - the first at their pop up merch/tattoo shop at the old Edward Day Gallery Space, and the second in the former Sonic Boom space in Honest Ed's. Whether Toronto is chanting "DFA" or "Tina Fey," it's clear mosh pit-happy fans will always show up in force for these dudes.

Wild Bengal Tigers (May 15, The Music Gallery)
The Music Gallery ran a tight ship of exploratory music, and Emergents IV, Jason Doell & Germaine Liu's Wild Bengal Tigers, was a demonstration of why the city needs non-traditional spaces like this. A half unpacked kitchen lay out on stage, and instruments and objects lined the pews to the door. The minimalist performance was enchantingly physical - and surprisingly musical. AJ

Slowdive (October 28, Danforth Music Hall)
We'd been holding our collective breath for Slowdive to reunite for 20 years. The English shoegaze pioneers did not disappoint the sold out crowd, and their material showed zero signs of sounding dated (Pygmalion was released in 1995). Solo at the Dakota in 2013 Neil Halstead had said, a twinkle in his eye, that a Slowdive reunion wasn't out of the question. Hearing his warm vocals paired with Rachel Goswell's angelic voice made it feel like things had come full circle. WL 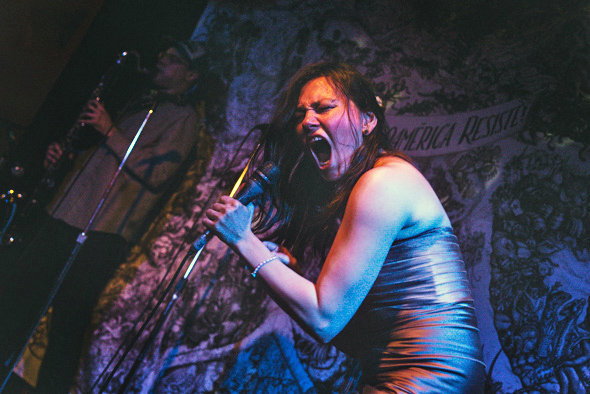 Tanya Tagaq
Of a handful of Tagaq's Toronto appearances this year, I first made it to her Lula Lounge show with Lido Pimienta, where the two respectively, then together, won over every person in the room. Inuit throat singer and Bjork collaborator Tagaq, shrieking "colonizer, colonizer," is a Francis Bacon painting come to life, CanCon style, and her rise in 2014 to her current position as Canada's most important musician was capped by fall's Polaris win (after she won over yet another room). AJ 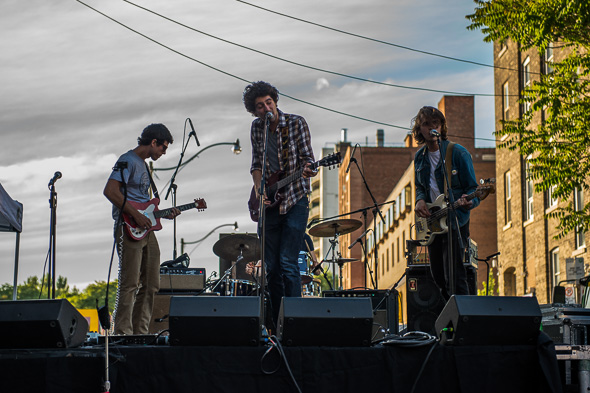 Double Cuts, Whitney Rose, NQ Arbuckle, Ferraro, Sam Cash & the Romantic Dogs, Zeus (June 21, Cameron House)
While Sam Cash, NQ Arbuckle, and Whitney Rose all had showcased shorter sets as second billing at the Horseshoe the night before, the Cameron House NXNE outdoor stage was their moment in the sun this summer. The swing-danceable Double Cuts opened the weather-perfect afternoon for extended sets, and rockers Zeus closed out the day to a crowd of 300+. RA

Run the Jewels (November 26, Danforth Music Hall)
After stellar NXNE sets, Run the Jewels made a triumphant return in fall despite fire that stranded their intended openers. Killer Mike and El-P were in full force delivering passionate, politicized lyrics. Songs touching on police violence hit especially hard just days after the Ferguson grand jury verdict. The rowdy crowd knew every, word and the sense of community was palpable. DB

Constantines (October 2, Danforth Music Hall)
A lot of bands are bringing polish to their live shows. Constantines just pour on the raw energy, and every band member matches Bry Webb's electrical current. It's unadulterated. It's authentic. It gets your hands in the fucking air. Reunited after a four year hiatus, Constantines didn't disappoint at summer fests (they were standouts at Field Trip), but they're at their best playing to diehard fans in a theatre. RB

The Space Lady (November 15, Double Double Land)
Double Double Land's 5th anniversary was Kensington's most magical night of the year. The Space Lady docked in from San Francisco to cap off to the venue's birthday weekend, playing psychedelic covers and a few touching originals for a packed house. I haven't seen this many smiles at a Toronto show since the Induced Labour reunion. AJ

Token photog's pick: The Weeknd (September 21, Molson Amphitheatre)
This was probably the best show I saw all year. It was just an epic show: the band was tight, girls were taking off their panties and throwing them on stage, there were clouds of ganja, everyone sang along to every syllable, and it rained all night but no one left. He's like MJ with a dirty mouth. AS

What did we miss? Let us know your top 10 live shows of the year in the comments.