The scariest thing that Halloween can do is remind you that the days are getting colder and shorter. This October 31st was no exception, with icy drizzle quickly turning to snowflakes shortly after midnight; a threshold representing the last fleeting minutes of autumn and scaring some away from venturing out at all.

Fortunately, Mansion's Terror Vision party offered an immersive night of dance music that allowed us to forget about the coming onslaught of winter, packing 99 Sudbury with a combination of local talent complimented by Jus-Ed and DJ EZ, two veteran dance music producers from different corners of the globe. 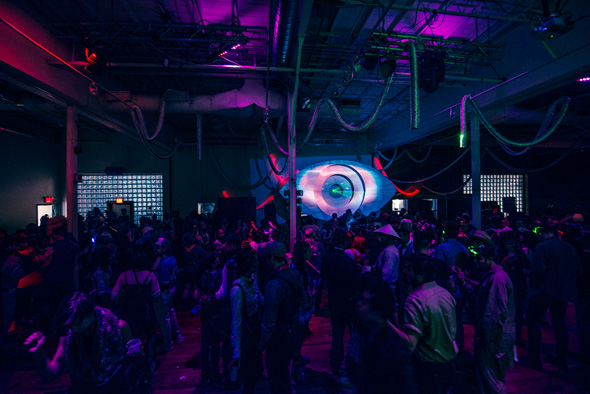 I was immediately struck by the mesmerizing visuals that characterized both rooms. The entrance to the Glass Factory room showcased a massive all-seeing eyeball looks out over the crowd, cascading a series of twitchy laser patterns across the room. Bedroomer's Jennifer Illet and Liam Sanagan perfectly nailed the feeling of dystopian surveillance, evoking a post-NSA feeling of paranoia. What's creepier in 2014 than acknowledging the reality that your every moment is being watched, recorded, or posted to Twitter? Foucault would be proud. 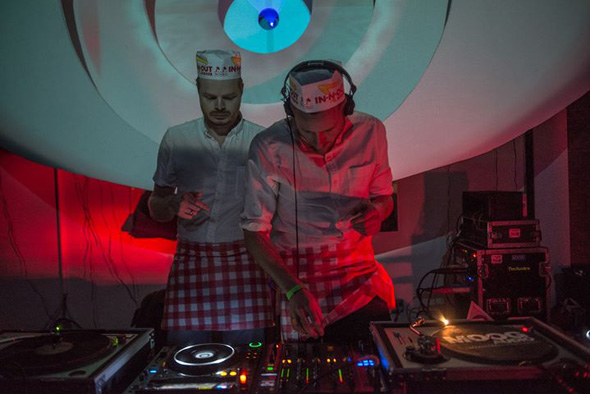 The main gallery showcased an immersive 360 degree projection by visual artist Timur Musabay, which blended grainy footage from 80's horror VHS tapes with modern digital editing techniques - no matter which way you turned, a Dali-esque eyeball stared back at you. Though costumes were varied, no one's getup came close to overshadowing the looming installations. 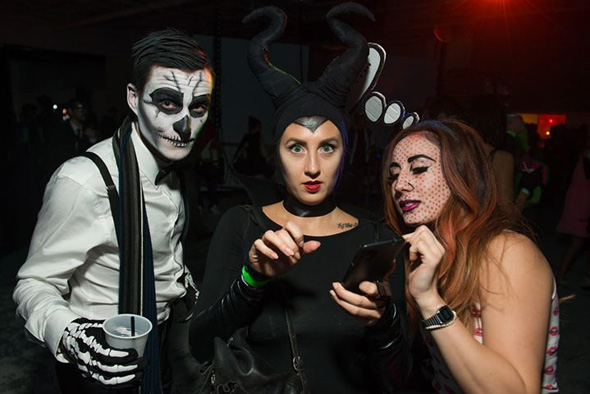 Terror Vision's promoters have begun to specialize in fostering new collaborations with local talent - and nowhere was the growing synthesis between different Toronto musical communities more evident than with their Bedroomer collaboration, which also included a noteworthy est by the duo of Eytan Tobin and LUM, both clad in nerve-jostling evil mime apparel. 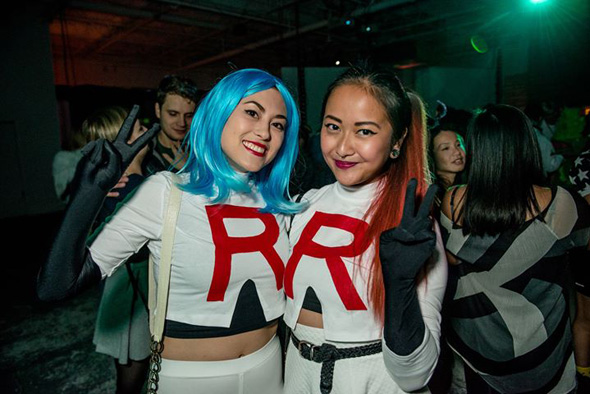 The duo bridged a perfect gap between Bedroomer's indie-focused output and the body-centric four-to-the-floor needs of the crowd, incorporating LUM's feverish remix of Majid Jordan's "A Place Like This" and Tobin's juke-focused, Aubrey Graham sampling "2On" to an extremely warm reception. Those interested in both producers should look out for a free mixtape end of November / beginning of December via Bedroomer, the first in an ongoing series.

Following Bedroomer, ÈBONY's Sylvermayne and Jordan Gardner brought the room to a temperature that briefly made me think my brain might be overheating, which had multiple dancers shedding layers of their costumes to facilitate better dancing. 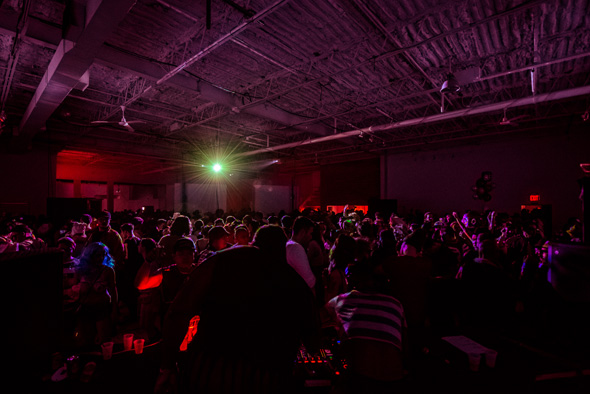 ÈBONY's devotion to eclectic techno and house that shies away from predictability makes them one of my favourite acts to see in any sized venue - but here, they used the room's booming sound system to excellent effect, airing out the careening gospel house of Floorplan's "We Magnify His Name" to Kyodai's piano-led "Sex Affair", all with a mixing style that was both precise and free-flowing; well-disciplined and uninhibited. 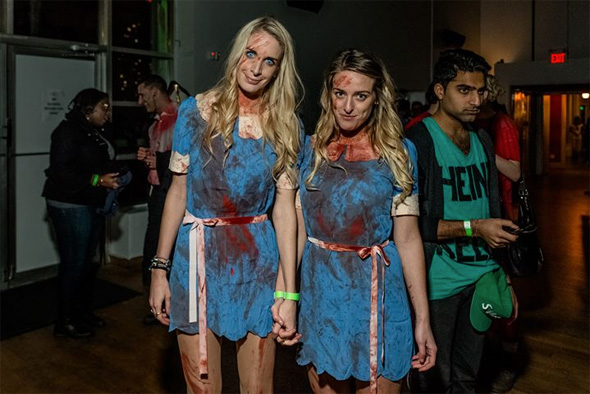 While ÈBONY's set kept me glued in the gallery for most of the night, I managed to duck into the Glass Factory in time to catch a bit of an Ace Ventura dressed Gingy and mustachioed Kevin McPhee playing vinyl cuts back-to-back, including a mix of Prince's "Purple Muisc" that fit the hallucinogenic vibe of the night to a tee.

Contemporary dance music has a thorny reputation of paying tribute to its elders, which is why I'm consistently impressed when Toronto showcases genre originators (earlier in October I caught Paris Mitchell, one of Daft Punk's overt influences). 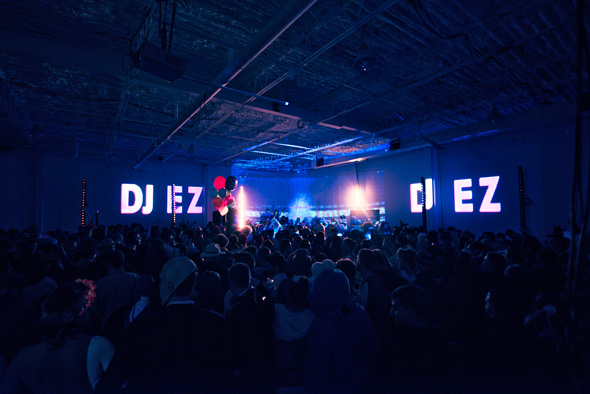 This Halloween brought two separate heavyweights, including London's DJ EZ, who debuted to an absolutely packed room, immediately leveraging the energy of the night to drop into a workout-paced routine of garage classics, from MK's remix of Nightcrawlers' "Push The Feeling On" to choppy edit of Harddrive's "Deep Inside". 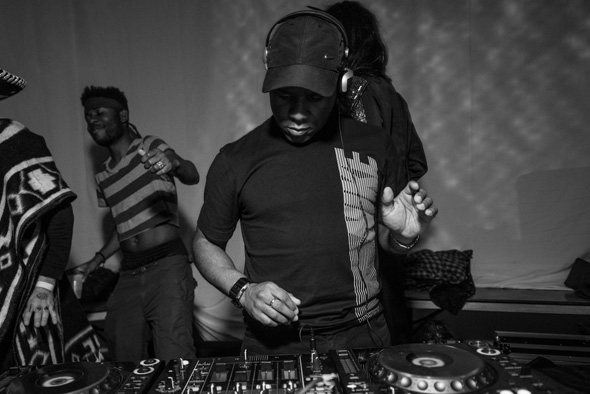 Otis Roberts' career in dance music has spanned over a decade and a half, so it's unsurprising that the whole thing was edited together with a tightly-stitched surgical technical quality, using a series of drops, echoes, delays, reverbs and cuts to keep transitions quick and lively- the kind of mixing that causes sporadic cheers to escape out your mouth without even realizing it. 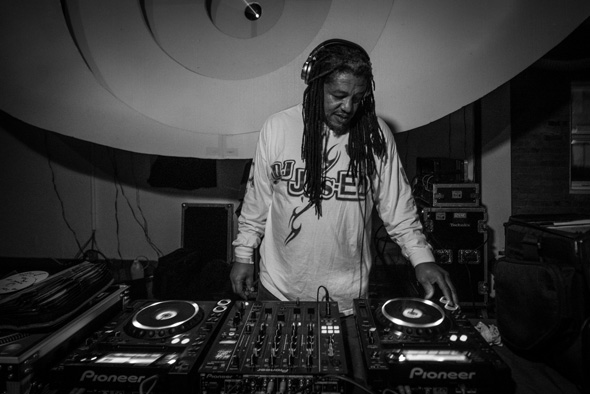 Wearing a white long-sleeve shirt with his name emblazoned on it, New York's Jus-Ed closed out at the Glass Factory room, showcasing some of the deeply soulful, bass-driven house music that's made his Underground Quality label one of New York's forces to be reckoned with. While the superior sound system in the Gallery room drew a sizeable portion of the crowd away from Jus-Ed's set, he carved out a rollicking groove that made his two-hour set melt away in no time, cycling through a series of choice cuts that made the large room feel as intimate as a tightly-packed basement party. 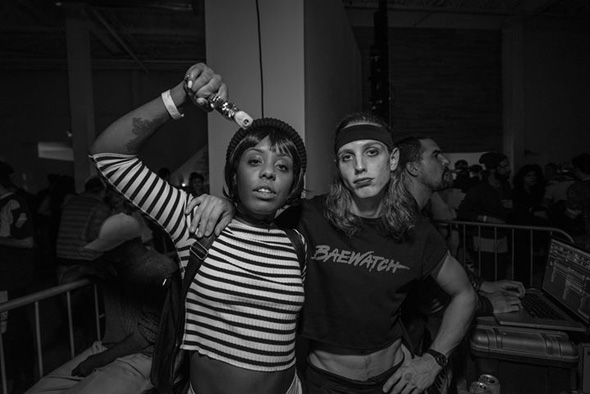 Lawerence's "Tangled Track" and the Mekanism's "Missing Love" were two tracks that I recognized amongst the selections; but really, one of the most enjoyable parts of Jus-Ed's set is to forget about trainspotting tracks, close your eyes, and let the textures sweep you into another realm.

The knowledge that dance music from past and present, originators and up-and-comers can not only co-exist together, but thrust the party into this blurred, communal let-go zone of total chaos is what makes me continually hopeful about Toronto's dance music community. And stepping out of the party into the blustery snow of early November, I wasn't feeling depressed about the end of autumn. Instead, I found myself thinking 'the beast is still very much alive.' Long live the new flesh.