Chris Isaak a dazzling beacon of light at Massey Hall

An angel descended at Massey Hall last night and blessed Toronto's most gentle kitsch-country fans with a light show that will endlessly dance as beams of pure love in the deepest reflective surfaces of our retinas, until we too pass on to the next life and become miniature rhinestone angels, serving the good word. The news of camp, mirror ball suits, and our most beloved Chris Isaak. 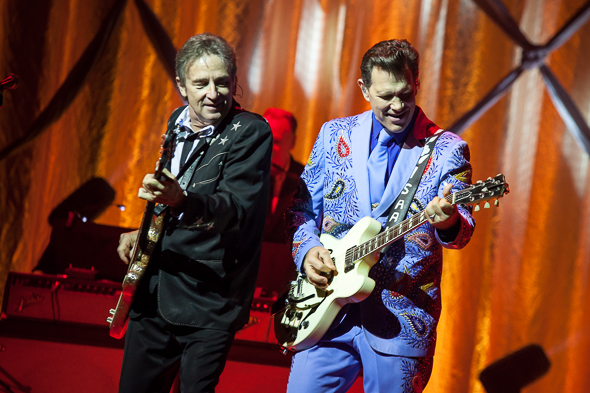 The scene in the rows at Massey Hall was neither country nor rock-and-roll last night. In fact, I realized I'd found something very rare here: the people that still buy CDs.

Ha ha? Shortly after I made this off-the-cuff observation the devotees seated behind me expressed desire to buy a CD post-show. Wrapped in lightweight cotton, they enthused that Isaak was fantastic last year; we are the gentle ones, the hidden freaks, the secret lovers of camp. We float in a beige army of wonder and true love. I snuggled into my reclining seat. 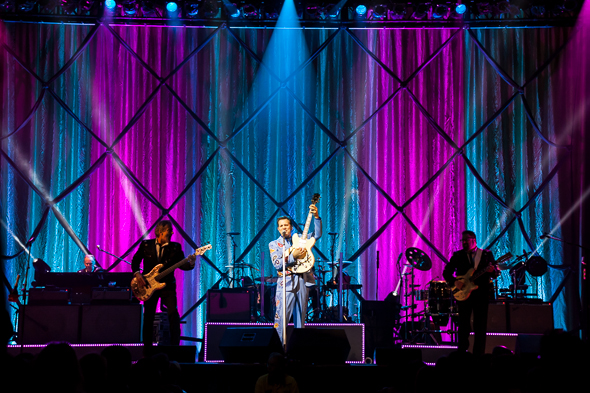 As Isaak did as well, later on - coming out into the crowd with a wireless mic (Isaak's band have wireless, sparkly guitars - the future is here) to sit with, dance with, croon to, and caress (I am jealous and I am glad for thee) believers while the stoic gentleman in the seat next to me was content to tap his knee in time to the music, ceasing only to clap between songs, for two hours. We embody our devotion in different ways.

My own palms found my chin as my eyes grew to their widest potential, for it is through our eyes that adoration must pass.

In a brave and holiest of bad ass moves, Isaak chose to play breakthrough hit and only reason some of us are above ground (never mind reading this), 1991's "Wicked Game," mid-set rather than later on in the night. Fog machines pumped translucent velvet: Isaak was full drama; full gothic master. The auditorium was exorcised and a single tear dropped from Massey Hall itself, nestling on Isaak's shoulder like a dog at the foot of one's bed. 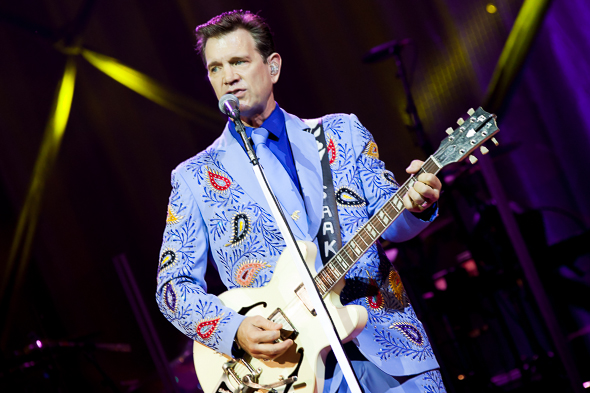 I've never wanted so badly to be someone as I want to be Chris Isaak. To rest each night knowing I had recorded the most important and realest song of all time. Any tension in the air vanished and we breathed the alms of Isaak's lungs with new vigor while the set pushed onward into its second hour.

Chris Isaak, if you're wondering, is 58 years old; spending 58 years on Earth is a clear sign that an extra terrestrial being of eternal light truly has compassion for our human vulnerability.

Singing the praises of Massey Hall through countless guitar changes, Isaak told us he'd like to stay all night, which was sweet, though we all know at midnight an angel becomes a dove. Playing a wide range of songs from Forever Blue, from "Somebody's Crying" to, of course, "Baby Did a Bad Bad Thing," the setlist also nodded to less divine (but still perfect) albums, and artists whom we hold dear, though we know will never match Isaak's grace, such as Jerry Lee Lewis. 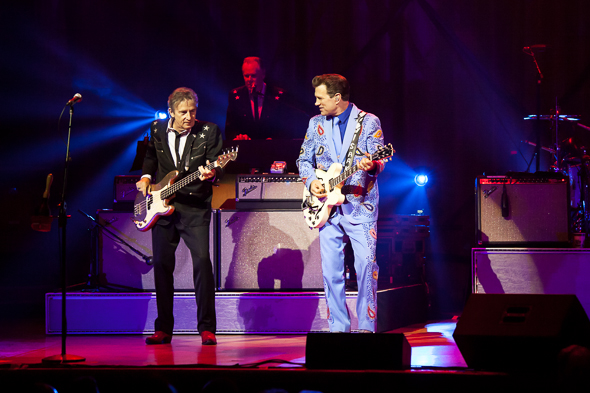 Oh, and Isaak made us laugh. There is stage banter, and then there is a man who is funny - who can joke for several minutes straight on stage at a kitsch country rock show in Canada and feel only love emanating from the beige and doe-eyed crowd. "Let your freak flag fly," Isaak said, and each of us opened our palms to find a single sequin winking at us. 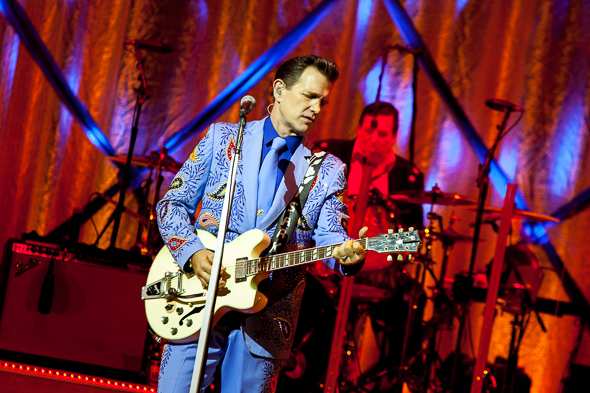 The fog, the piano shooting fake fire, the two-drummer band, the sequins and the costume changes: all these things impressed us, to some degree, and yet nothing truly mattered but Isaak's supreme presence.

A blue spirit bathed in a body halo sewn from the sequins of the heavens, his voice rose up true to those timeless recordings and beyond, puncturing the walls of our hearts and the muscle memories we flex when listening to track 5 over, and over, and over.

Everything was superfluous. Everything but love. The man from the seat next to me taps on resolutely at his desk today, bathed in the light of his brush with the great beyond.

Check out these drawings on Chris Isaak's website. What is going on with them?? 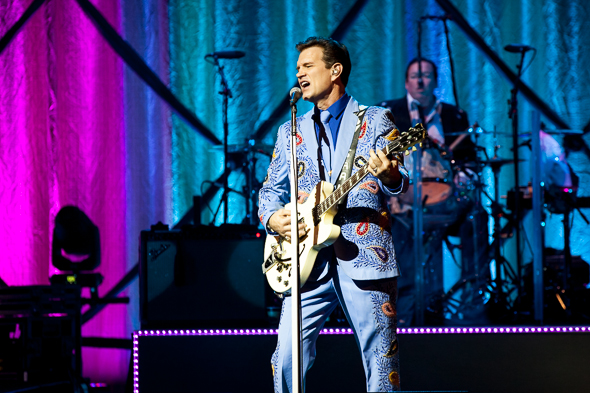