Mexican Slang are not exactly new to the Toronto scene, but there's a decent chance you may not have heard of them yet. As their new record Inside the Velvet Castle drops on buzzy (sorry) Toronto label Buzz Records, here are some key notes from the Mexican Slang phrasebook.

Singer/Guitarist Annabelle Lee started as many aspiring artists do: writing and recording everything with little more than a computer and a guitar. "The main reason I started playing music is I had to get out a lot of anger," says Lee. "I just wanted to get it out of me. The music is angry so that I don't have to be." Writing as exorcism inspired the four EPs she released in quick succession. Lee took on the name Mexican Slang after reading a traveler's guide to Mexico.

"The idea behind it is essentially daydreaming about running away from my crappy life to live in the Sonoran desert. The music is supposed to be a hazy, noisy soundtrack for the head trip," she says, expanding on her original motivations.

The project eventually expanded about a year and a half ago to include Jimmy Tony Billy (bass) and Denholm (drums). "Before getting the band together I just wanted to make something and put it out there for whoever wanted to listen," Lee says - "those EPs got me a band."

"I was listening to all the demos and asked if I could be in her band," adds Denholm (perhaps best known as part of the team that brought you Toronto's label phenom and new home to Mexican Slang, Buzz Records). "In terms of Slang, I brought that in once we had the EP ready and gave it to the guys and they liked it so we moved forward."

The addition of Mexican Slang looks great amongst marquee label mates Odonis Odonis (whom Denholm also plays bass with), Greys, and Weaves. The camaraderie between the bands is something Denholm has always wanted. "That was the goal behind the label and I think that's still what we're trying to encourage with our bands," explains Denholm. "When I was a kid I found out about bands through labels like Kill Rock Stars or Subpop. You could always trust them to give you something you might like."

Call it Elizabeth Fraser and The Banshees; the seemingly impossible combination of sludgy-gothy-dreamy is one that Mexican Slang has made near perfect. There is an incomprehensible warble-like quality to Lee's vocalization that certainly evokes the Cocteau Twins at their '80s best, while the guitars conjure up The Cramps' Poison Ivy kicked in to overdrive.

"Oh wow. Cool," says Lee with some surprise on hearing my comparison. "I get influence from a lot of things. I just try to make things sound the best that I can make it sound." As for appealing to their goth underbelly she simply laughs and says "I wear a lot of black."

Now as a strong 3-piece unit, the band is on the cusp of releasing the stellar Inside The Velvet Castle EP (now streaming at here) on July 15th. Lee sounds completely happy sharing writing duties with her band mates - "it sounds better having input from different people."

In doing so, Lee's sacrificed none of the immediacy of her early EPs and only solidified her grasp on the band dynamic. "I still do the guitar and lyrics," she says. "But they come up with their parts. Sometimes it [writing] starts with a bass part or the drums as opposed to guitar. I'll build off what they are doing." 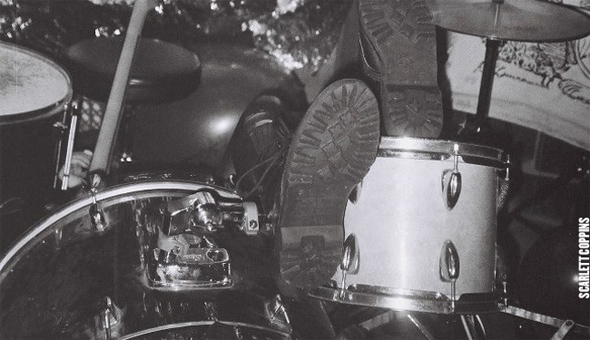 There's a particular image posted online that shows Lee strewn over a drum kit which might give you the impression that Mexican Slang are chaos personified. "I prefer an energetic performance as long as it's real, you know," says Lee. "As long as it doesn't feel 'put on.' I feed off the crowd."

Currently preparing to take the band on the road for the first time (full details available here), Lee is excited to kick it off with the EP release party on Saturday July 12 at Manifesto's space (37 Bulwer Street). The $10 admission will also get you a limited edition cassette copy of the new EP.

Writing by Evan Sue-Ping. Photo by Sevres Babylon in the blogTO Flickr pool.