NXNE to host a panel called "WHY NXNE SUCKS" (yes, all caps)
Long story short, last week an interesting exchange happened between myself and NXNE after we reported on a disturbing Twitter conversation. The fest's been feeling the heat all year for their radius claus, non-transparency, use of SonicBids, not paying small bands, and more, but what happened between the fest director and Weird Canada's Aaron Levin was unusually odd. The director of NXNE has since deleted his heated communiques, generating interest in what exactly was said. No one needs to feel gas-lighted here, so we've documented the conversation as it stood when we posted about it last week. Read screencaps of the full Twitter convo here. 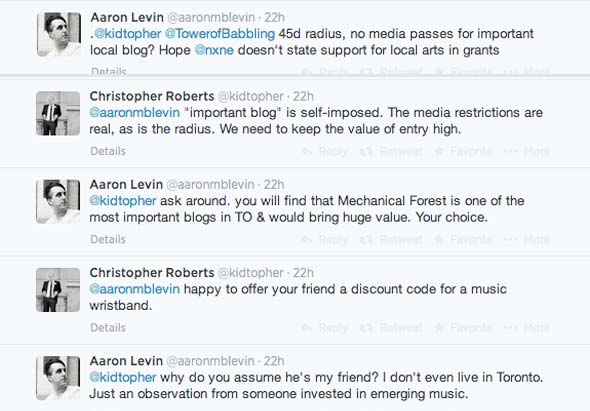 I'll be speaking at the actual WHY NXNE SUCKS panel (tellingly named by NXNE themselves, who have a reputation for taking a "haters gonna hate" stance to anyone who comes to them with genuine concerns) along with Paul Lawton (Ketamines), Daniel Seligman (Pop Montreal), and moderator Shaun Bowring (The Garrison). If you have any concerns you'd like to see addressed at the panel, email aubrey@blogto.com (off record or on) or come out to ask questions or speak concerns from the floor. OMG NXNE SUCKS LOL is free to attend Friday June 20, 1pm, Hyatt Regency Toronto (370 King St. West), Regency A, Mezzanine floor. Is it a trap?

Airplane Boys drop Egos and Expectations album for free
The Beau Monde Collective has release APB's album Egos and Expectations for free - I'm not even sure why we get to be this lucky, but download it before they (or some major) take it down. Drake-style rap/r&b vocals, production's good, Scarborough tough/sensitive guy vibes, more macho than I was expecting from "Harvest" but I don't know these guys or where they're coming from. Check out "Under the Influence," "Different Worlds," "Industry People," (so Crystal Castles-y) "Scarborough Kids," and of course "Harvest."

Stream Greys new album If Anything
If Anything is all online. Spoiler: it's loud. Greys are one of Toronto's loudest hype bands - you can call them noise rock if you want. Check out our Breakout Band feature on Greys and then catch them at NXNE.

Tasha the Amazon - Fearless and Peerless
"Half the people I meet make me want to claw their eyes out but who these kids look up to if I was serving 20 to life now?" Tasha, It's like you know my life (except for the Amazon vacation thing). Toronto ball-cap looks rad in the jungle in this nature-ific video. Lizards rule.

Man Made Hill - Speed Dating
Huckleberry Friend's fan vid for "Speed Dating"is like if David Cronenberg had a Tumblr as a very troubled teenager. The endless flashing pics really highlight the creepiness of the song.

NXNE / various / until June 22
Those free Yonge and Dundas shows at Toronto's largest music fest run from Thursday to Sunday. From rap to indieTM to Swans, check out our preview of what to see at NXNE here including Future Islands on Toronto Island and some late night dance parties, and don't forget about the local bands playing NXNE and the load of free events like record swaps and in-stores to hit up.

Construction Unofficial NXNE / June 20 / 9pm / Double Double Land / PWYC $5-10
Digging this line up: New Zebra Kid, Wild Highways, and Zoo Owl will perform as part of Long Winter's summer series Construction at DDL on Friday. Check out our Breakout Band feature on Wild Highways here. The show is all ages, and you can pay on a sliding scale from $5-10

Unaffiliated / Artscape Gibraltar Point / June 22 / 2-11pm / $10
This unofficial NXNE show doesn't really want you to call it that, but it does want you to notice it's unaffiliated with the festival even though it occurs on the final Sunday. Unaffiliated Events (Halloway Jones & Julia Dickens), No Visible Means (Jesse Locke & Tom Avis) and Weird Canada will combine forces to bring Zacht Automaat, Petra Glynt, Man Made Hill and more to Artscape Gibraltar Point on Toronto Island along with food, refreshments and art installations.