Canadian Music Week 2014 runs in Toronto May 6-10. Here's a roundup of our must-see shows.

It's time to pull yourself out of mega-fest hibernation: CMW gets underway next Tuesday at over 60 venues across the city. This year, the fest has moved from its usual March slot over to May, where it will kick off Toronto's festival fever as over 1000 artists set up and tear down on Toronto stages. There's a whole lot going on, from music, to a conference, a film fest, comedy fest and even a few award shows.

You don't want to lose yourself in a desperate TTC struggle, frantically jetting around the city in hopes catching all your favourite bands (not to mention carrying the cash required to shell out cover each time). To avoid this, plan ahead by checking out all the CMW shows on their schedule page, as well as setting yourself up with a five-day wristband, which will let you into most shows hassle-free. Purchase yours here.

To help fans gain access to some of the larger shows (City and Colour, Neko Case, the 1975, Owen Pallett, Mastodon and the Canadian Radio Music Awards), CMW has introduced a concert lottery. Fans can RSVP for select shows through the daily social media announcements, and those who are quick on the draw will win guaranteed spots on the list. Lottery contenders must be wristband holders, which is another good reason to spend the $75 ahead of time.

The number of musical offerings at CMW is a little, um, unmanageable, even for the most proficient festival-goer. To help you out, we've broken it down to our top 25 picks that will make for a happy CMW. We've included links to each band's CMW page, where you'll find info on set times, whether a set is all ages or 19+, and how your wristband can help you out. Leave your suggestions for other not-to-miss shows in the comments below. 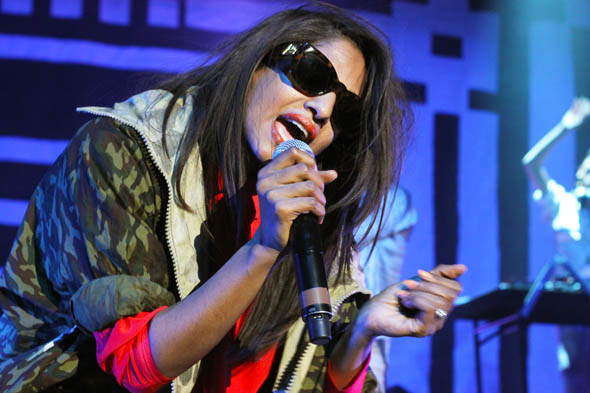 M.I.A. / May 3 / Tattoo
Contrary to her name, M.I.A. has been quite visible lately. She released her new album Matangi not too long ago, and now she's jet-setting around, playing tour dates like it's going out of style. This free performance falls a little before the festival officially kicks off. Initially scheduled as a huge, mind blowing free show at Yonge & Dundas Square, the move to the (admittedly revamped, but insanely smaller) Tattoo on Queen has dampened enthusiasm for this year's fest. Still, it's M.I.A.

Tegan and Sara & Ellie Goulding / May 9 / Kool Haus
Well done, CMW - you've brought in the big guns for Fanfest 2014. Still smelling of Winnipeg and champagne, Tegan and Sara will be headlining fresh off their three Juno wins. There's even another heartthrob in the mix: British mega-star, Ellie Goulding will take the stage beforehand. Did you nab tickets early? Beause otherwise, tough luck - they're sold out now, but you could try out the CMW lottery mentioned above.

Owen Pallett and Doldrums / May 10 / Danforth Music Hall
Owen Pallett is one of the several impressive names CMW scored this year. Plus we have Doldrums going up first as the perfect opener to set the best mood. This is going to be good.

ODESZA / May 9 / Tattoo
Music festivals can get you in a bit of a haze, running around the streets of Toronto, drinking the night away, while trying to make sense of some scribbled schedule you thought you'd stick to. Forget everything else, and run on over to Tattoo where you can trip out in all the good vibes of a packed Odesza show.

Neko Case / May 9 / Massey Hall
Neko Case basket cases shrilled with joy when CMW announced that the folky songstress would be making a festival appearance. She'll be filling Massey Hall with her beautiful sounds at 9:15pm. Go hang on her every poetic word.

The 1975 / May 6 / Kool Haus
These British boys will be kicking off the first day of the fest with their super catchy indie pop-rock. This show was in such high demand that it got moved from Danforth Music Hall over to Kool Haus, but don't worry - if you got tickets for the original venue, they will still be honoured. The audience will be a sea of leather jackets, so it's gonna be a sweaty one.

City and Colour / May 9 / Air Canada Centre
This man has a whole hell of a lot of admirers. I get it, tattoos and sensitive songwriting have a tendency to get some people really hot and bothered. I mean, you could just lurk around in North Toronto and eventually see him - but I suppose tickets to the ACC show will have to suffice. To sweeten the pot, Half Moon Run will be opening.

Television / May 10 / The Phoenix
For the uninitiated: Television essentially invented tight-pantsed New York indie-rock at the dawn of the CBGB era. They directly influenced every band you liked in the early 2000s, and are responsible for creating the only guitar riff I could happily listen to for 10 minutes straight. This will be a hot ticket, but if you can, go, and witness the masters at work.

The Indie Music Awards / May 10 / Kool Haus
Lot's of bands will be hanging around this awards show, which has lined up performances by The Strumbellas, Ponctuation, The Hidden Cameras, Hollerado, Born Ruffians, Mounties, and Little Dragon. This is a cool way to see a lot of bands all in one night, but just so you know, most of these sets only last about two songs. Then they get back to rambling presenters handing out Indie awards to artists with equally as rambly acceptance speeches. Formal attire not necessary. 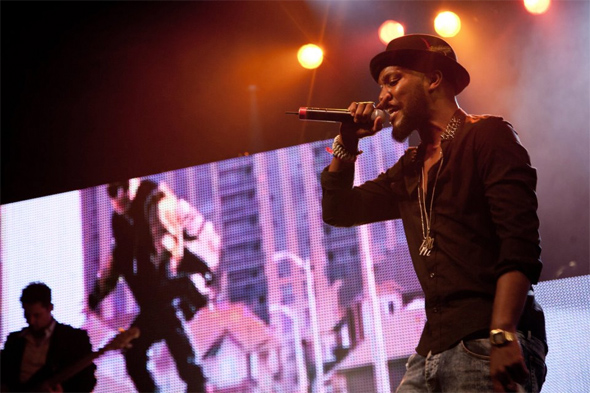 The Reason and The Dirty Nil / May 6 / Tattoo
The Reason as in the rock band from Hamilton, not the Hoobastank song. I discovered them back when I was one of those "punx not dead" teenagers, and would catch their shows in any surrounding city that I could get my parents to drive me to. They've matured their original sound into an alt-rock feel now, but their shows are still as much fun as they used to be. Joining them will be openers The Dirty Nil, bringing their patterned button-ups and scream-in-your face goodness.

Come As You Are / May 6 / The Great Hall
This show is a little different: It's a night of Nirvana songs performed by Chris Murphy of Sloan, Hidden Cameras, DIANA, JULY TALK, By Divine Right, Vag Halen, Biblical, YOUNG RIVAL, Wildlife, Luke Lalonde of Born Ruffians, Light Fires, Lisa Bozikovic, and more. This show is in partnership with In Bloom, and will honour the legacy of Kurt Cobain while raising awareness for youth mental health.

Justin Nozuka / May 6 / Mod Club
Tuesday will be swoon-sday thanks to the acoustic summery jams of Justin Nozuka. Hear his angelic voice at 8pm and your heart will be set aflutter.

Brody Dalle / May 7 / Horseshoe
Alert the masses! Brody Dalle, the former Distillers frontwoman, and queen of punk-rockdom as us '80s/'90s babies know it, is bringing her solo project to CMW! Brody and her side-mouthed growl will be at The Horseshoe, and you mustn't miss out on the potential crowd-surfing deja vu. I doubt she'll take requests, but if you scream City of Angels or Drain the Blood enough times, who knows what will happen?

BROODS / May 7 / The Drake Underground
This New Zealand brother-sister duo have made themselves one of the fastest rising new acts to emerge in the last year. With shows already planned across the globe, as well as the release of a debut album expected in late 2014, Broods are only just getting started.

The Airplane Boys / May 8 / Tattoo
Scarborough duo APB (Airplane Boys) are playing one of CMW's most-hyped shows: HUSTLEGRL's Thursday hip hop showcase featuring Naturally Born Strangers, Tre Mission, ABO, and A-Game. These guys are breaking out in a big way and with the kind of talent they've tapped into, they deserve it. Rap fans should not miss this line up.

Diana / May 8, 9 / Drake Underground
The two days of DIGG DEEP/GET HIGH are going to be some of the coolest shit happening this year. We all know DIANA by now. Did you also know they just released a video for Strange Attraction? The band will change it up with, quote "a night of softer ambient music and then a night of pretty bangin dance music."

Maylee Todd / May 8 / Horseshoe
Of course. Toronto talent Maylee Todd will play her disco-fied pop jams at The Horseshoe at 9pm. Wear your best outfit and get groovy.

Matt Pond PA / May 8 / Mod Club
Matt Pond PA is in the middle of a big tour celebrating the 10th anniversary of his album Emblems. He says that he's never played the full albums' worth of songs in front of a live human audience before, so this should make for an interesting show. He'll be touching down on the Mod Club stage for the Thursday of CMW. Large-scale clap alongs to be expected.

Comeback Kid / May 9 / Mod Club
This is the right show if you wanna let go of a workweek of tension by thrashing around. These guys recently put out a new video along with a whole new album, so you'll be hearing some new material.

The Slackers / May 9 / Lee's Palace
The Slackers have spreading their "Jamaican rock 'n' roll" around the world for over two decades now. Jamaican me want to dance. Bring your ska-enthusiast friends, stretch it out, and then join in the circle skank. It will be a fun one.

Papermaps / May 9 / Rancho Relaxo
NXNE's loss is Canadian Music Week's gain, as Papermaps frontman Dean Marino recently detailed the kerfuffle that came from ending up on the wrong side of NXNE's radius clause. Come see Marino and Co.'s moody guitar jams and make sure that pain won't be in vain. South of Bloor and Brothers of North will warm things up with melodious arena-rock sets; bring fists for raising.

ShaqIsDope / May 10 / Baltic Avenue
This 21 year old rapper hailing from downtown Toronto's St James Town Community has been stirring up a bit of buzz after the release of his 11-track mixtape "Early Beginnings: The Shaquille Baptiste Story". Having both Latin and West Indian descent he represents a mutlicultural element characteristic of Toronto's populace. He'll be sharing the stage at Baltic Avenue with Halifax's Quake Matthews, Toronto's King Reign, among others.

Wildlife / May 10 / Adelaide Music Hall
This group truly has an interesting thing going on. They are loud but poppy and lend a great deal of focus to melodies that allow for the raw, emotional content of their music to shine. They'll be performing at what might be one of CMW's most exciting showcases, hosted by Osheaga and Life or Death PR, featuring We Are Wolves, Nothing, Groenland and two late night special guest DJ performances that are sure to turn heads when they're announced. You might want to get to Adelaide Hall early for this one.

BASECAMP / May 10 / The Garrison
2014 has been a great year so far for this Nashville based trio that effortlessly blends synthy electronic production with ethereal vocals layered into an arrangement that can be appreciated by a pop audience. Their debut "Emmanuel" was well received online and they've gone on to support acts like CHVRCHES. They'll be touching The Garrison's stage on May 10 at 12:30am for a showcase that is being curated by Hilly Dilly, a taste-making blog with a growing reputation for discovering unknown talent online. Catch them at Lee's on May 8 as well.

OFF! / May 10 / Lee's Palace
Come prepared for a lot of loudness and a lot of being pushed around. OFF! just released a new album a few weeks ago, giving us a good chance to have the whole thing memorized by the time they hit stage for CWM's closing night.

Writing by Julia Stead, with contributions by Markit and Natalia Manzocco.