The top music festivals in Ontario for 2014 will take you all around the province. While we love Toronto (and its festivals), sometimes you need to spend some time apart from loved ones to appreciate them more. While Toronto has enough music fests to keep you within city limits just about every weekend of the summer (check in soon for our master list), there are a myriad of experiences a short road-trip away - ones you won't find at Yonge and Dundas.

The festival season has already started: Guelph's Kazoo Festival (not all kazoo music) just wrapped up, and we've already posted our list of must-see spring fests, so don't fall asleep at the wheel and miss out these Ontario destinations. (There's also no question that Quebec has its fair share of amazing festivals, including Osheaga and MUTEK, but we've limited our scope of hype to Ontario's best and brightest.)

If none of these fests have you booking a rental car, there's one more very specific but well known stop: Collingwood's Elvis Festival. From July 24 to 27, Collingwood will be awash is sequins, blue suede shoes and slick hairdos. You're welcome.

Here are the top ten Ontario music fests worth hitting the highway for this spring and summer.

RBC Royal Bank Blues Fest
Location: Ottawa
Dates: July 3-13, 2014
Venue: Lebreton Flats Park
Drive time: ~4.5 hrs
More Bonnaroo than "blues fest", the Ottawa Blues Fest is up there with NXNE for the title of largest festival in Ontario. Maybe you've ignored it because of the misleading name, but it's tough to ignore names like Lady Gaga, The Killers, Blake Shelton, Queens Of The Stone Age, Lady Antebellum, Journey, Snoop Dogg ... and those are the just the headliners among the 60-plus performers scheduled for 2014.

Electric Eclectics
Location: Meaford
Dates: August 1-3, 2014
Venue: Farm outside Meaford
Drive time: ~2.5 hrs
Drawing from a pool of international electronic acts that cover the spread from music to arts, Electric Eclectic lives up to its name. Happening on private property outside an already small town, this is as far from the city as you'll get. 2014's lineup includes Jef Barbara, Fresh Snow, Ice Cream and many more, with even more still to be announced.

Sound of Music
Location: Burlington
Dates: June 12-15, 2014 (Kick-off: June 7)
Venue: Various
Drive time: ~45 min.
One of the two free options on this list, Sound Of Music lands on Father's Day weekend and caters to all ages, making this a family-friendly affair. Also, if you're looking for the quickest get-out-of-town option, Burlington's the closest on this list to Toronto. Past performances have ranged from current-Canadian (Lights, USS, Carly Rae Jepsen) to classic-Canadian (Trooper, Tom Cochrane, April Wine) and all points in between.

Wolfe Island Music Festival
Location: Wolfe Island (Kingston)
Dates: August 8-9, 2014
Venue: Marysville, Ont.
Drive time: ~3 hrs
Wolfe Island is where Lake Ontario meets the St. Lawrence river, a free 20-minute ferry ride from Kingston. The festival spans two days: Friday's shows take place in various small venues around Marysville (the only town on the island, where the ferry docks), and Saturday goes from noon 'til night on a baseball diamond. The bands are largely Canadian indie, with a hip-hop act or two for variety, but it's the laid-back atmosphere that makes it worth the trip; you're just as likely to run into Joel Plaskett at the general store as you are catching him headlining the main stage. Camping is also part of the experience (but not required), with a tent village erected steps from the main stage - just make sure you book early.

Hillside
Location: Guelph
Dates: July 25-27, 2014
Venue: Guelph Lake Island
Drive time: ~1 hr
Hillside has gained enough notoriety in its 30-plus years that their weekend passes have been known to sell out in minutes. Focusing largely on Canadian talent, 2014 brings Tegan and Sara, Hey Rosetta!, Hollerado, Young Galaxy, Four Tet and tons more. There's a distinct hippie vibe, though that's not necessarily found in the musical lineup - it ranslates to excellent local food vendors, no water bottles for sale (bring your own for free refills) and zero guys wearing empty beer cases as hats. Camping can be a big part of Hillside, but for that you'll need to either book in March, or have someone onsite at 8am the first day to score an overflow site. 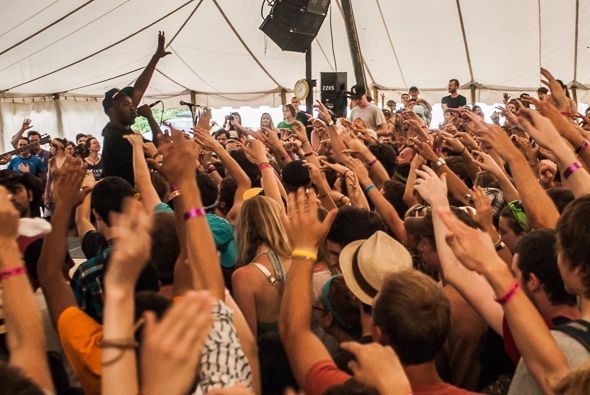 Scene Music Fest
Location: St. Catharines
Dates: June 28-29, 2014
Venue: Montebello Park/Downtown St. Catharines
Drive time: ~1 hr
The St. Catharines Event for New music Entertainment (SCENE... get it?) is nearing the 20-year mark, with a music lineup that has been trending towards the mainstream side of CanCon. This year's edition keeps things on track with Marianas Trench, Matthew Good, The Sheepdogs, Arkells, Lights and Monster Truck atop the bill, with more bands to follow.

Mariposa Folk Festival
Location: Orillia
Dates: July 4-6, 2014
Venue: Tudhope Park
Drive time: ~1.5hrs
Born in the '60s, Mariposa has the most history out of any of these festivals, having celebrated its 50th anniversary back in 2010. It's moved around over the years, but the "folk" classification has always stayed true - names like Bob Dylan, Joni Mitchell, Joan Baez, Emmylou Harris, and Daniel Lanois have all graced the stage. 2014 will feature Rosanne Cash, Ani DiFranco, Hydra (Leslie Feist's latest project), Craig Cardiff, Dar Williams, Tim Chaisson and more, spread across seven stages. Camping is a viable option. Expect a peaceful vibe.

Boots & Hearts
Location: Bowmanville
Dates: July 31-August 3, 2014
Venue: Canadian Tire Motorsport Park
Drive time: ~1 hr
The absence of country music at most other festivals is more than made up for with Boots & Hearts. The Coachella of country, Boots & Hearts has been bringing the who's-who of country music to Canada since 2012. This year's big names include Toby Keith, Luke Bryan, Blake Shelton, Hunter Hayes, Lee Brice, Paul Brandt and more, while also shining a light on emerging country stars. As for the festival experience, "beer tents" is listed twice under their on-site services. While camping is available, B&H takes it up a notch with RV options and hotel packages.

Supercrawl
Location: Hamilton
Dates: September 12-14, 2014
Venue: James Street North
Drive time: ~1 hr
You can't beat the value of Hamilton's Supercrawl: more than 50 bands for free over several days. While 2014's lineup has yet to be announced, last year had Passion Pit topping a bill that included Yo La Tengo, Joel Plaskett, Said The Whale, Wintersleep, Young Galaxy, Metz, Fucked Up and so many more. With a strong art component along with stages for smaller bands, it's hard not to find something to like at Supercrawl.

JAMJAM A Music + Art + Food Festival in a Forest
Location: Springwater Conservation Area
Dates: Saturday, August 30th
Venue: Aylmer Ontario
Drive time: 2 hours west of Toronto
Music, art, and food will all be merging deep in the forest at JAMJAM. Dynasty Electric, Doomsquad, Lido Pimienta, Milk Lines, New Chance and many more are on the one day line up, plus there's hiking and fishing to be had. Bring your camping gear and settle into the beer tent, or bring your most towering stilettos because a little nature never got you down.

Writing and photos by Matt Forsythe.